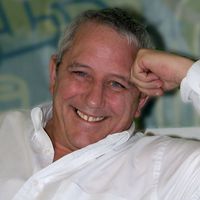 Tom Green
Writer
Tom Green is a former Lifewire writer, the author or coauthor of 15 books on computer graphics, and is a professor at Humber College.
our editorial process
Tom Green
Design
In This Article

The Image Trace tool in Adobe Illustrator CC makes it possible to turn line art and photos into vector images. Learn how to convert bitmaps into vectors and PNG files into SVG files using Illustrator.

What Is the Illustrator Image Trace Tool?

When converting an image into vectors, the areas of contiguous colors are converted into solid shapes. As you add more shapes and vector points, the file size becomes larger and it requires greater CPU resources to map those shapes, points, and colors to the screen. This process works best in images with a subject that stands out clearly against its background, such as the below image of a cow standing against the sky.

How to Trace Images in Illustrator

To trace images with the Image Trace tool in Illustrator:

Another way of tracing an image appears in the Object menu. When you select Object > Image Trace, you have two options: Make and Make and Expand. The second choice traces and then shows you the paths. Unless you are tracing a sketch or line art with a solid color, the result is usually black and white.

The icons along the top, from left to right, are the presets for Auto Color, High Color, Low Color, Grayscale, Black and White, and Outline. There's also a Preset drop-down menu where you choose the color mode and the palette to be used.

You can modify the tracing result in the Advanced options. As you fiddle with the sliders and colors, you'll see the values for the Paths, Anchors, and Colors at the bottom of the panel increase or decrease.