From VR and 4K Screamers to Solid Bargain Buys

The Rundown
Best Overall:
EVGA GeForce GTX 1080 Ti at Amazon
"This card makes 4K gaming at 60fps a reality with just one card."
Best Budget:
EVGA GeForce GTX 1050 Ti at Amazon
"Impressive performance in such a compact and affordable card."
Best for 1080p:
MSI GAMING Radeon RX 480 at Amazon
"It’s small, affordable and a beast at handling 1080p."
Best Entry-Level:
Gigabyte Radeon RX 560 at Amazon
"The most affordable way you will be able to play the latest games at high settings with a respectable framerate."
Best VR:
ASUS GeForce GTX 1070 at Amazon
"It features Aura RGB Lighting that are capable of displaying millions of colors in strobing, breathing, cycle or static lighting."
Runner-Up, Best Budget:
MSI RX 570 ARMOR 4G at Amazon
"If you want to play the latest games, but don’t want to break the bank, this is a great upgrade."
Best Mid-Range:
ZOTAC GeForce GTX 1060 Mini at Amazon
"Well rounded and great for overclocking."

The Nvidia GTX 1080 Ti might lag a bit in video RAM compared to the other models, but its GGDR5X VRAM is faster at 11Gbps. The card builds on the Pascal architecture, making leaps in cooling solutions and number of cores. The card has removed the DVI port, which gives more room for a high airflow thermal solution to complement the cooling system, topping off at 75 degrees Celsius.

The card has a base clock of 1,480MHz and boosts to 1,582MHz. This card makes 4K gaming at 60fps a reality with just one card. While some users report a slight drop in framerate on systems and setups, optimized games can be played in UHD at extremely high framerates. This impressive technology has high overclocking potential, is already more affordable than other top end cards and will only to continue to drop in price once demand meets supply.

Ultimately, Gamers just appreciate that they can get such impressive performance in such a compact and affordable card (it’s just 5.7 inches, the perfect size for just about any rig). This card shows the power of Pascal architecture and why it is such a great time to be a PC gamer.

This is AMD’s equivalent of Nvidia’s popular GTX 1060. It’s small, affordable and a beast at handling 1080p. While 4K gaming is not quite perfect, the 60 fps 1080p and high framerates on 1440p are great for most new games. Even then, 4K optimized games such as Doom look beautiful and can be played at 35 to 40 fps.

The card is also built with overclocking in mind, with Armor 2X thermal cooling using torx fan technology and advanced airflow. While this architecture will push your games and VR experience to the limit, Frozr technology stops the fans in low-load situations, so that you can enjoy total silence when browsing. It has 4GB RAM and a memory speed of 1,291 MHz. 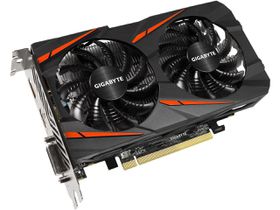 If you are building your first computer or contemplating a new graphics card, but don’t want to invest much over $100, this fast and easy-to-install Gigabyte Radeon RX 560 is an ideal choice. This is the most affordable way you will be able to play the latest games at high settings with a respectable framerate. It is built with 4GB 128-Bit GDDR5 RAM and can breeze past boost clock speeds of 1,224 MHz without an increase in energy consumption. It also features full UHD HEVC encode and decode support.

Get ready for the next generation of VR gaming with this custom-designed ASUS card featuring unique PCB design for ideal image quality, durability and latency, all to get you immersed in VR without interruption. Dual HDMI 2.0 ports connect headset and the monitor. It features Aura RGB Lighting that are capable of displaying millions of colors in strobing, breathing, cycle or static lighting. While your lights are set to a cool blue, keep your system cool with DirectCU III cooling technology that transports heat away from the GPU for quieter and more efficient operation.

A brand new video card for just under $200, the ARMOR RX 570 features an AMD Radeon RX 570 chipset and 4GB of GDDR5 RAM. If you want to play the latest games, but don’t want to break the bank, this is a great upgrade. It puts an end to choppy gameplay and low framerates with artifact-free performance. The card is VR ready and features AMD’s Polaris architecture, which has improved shader efficiency, tuned L2 cache behavior and enhanced geometry engines. The memory speed of 1,230 MHz will get you a seat at the table for most games, but will have a bit of trouble playing 4K at a high frame rate. Still, it performs well at 1080p and will leave you happy for the price tag.

This mid-range video card is a VR-ready entry in the Pascal series that is well rounded and great for overclocking. Based off of Pascal’s 16nm FinFET manufacturing process, the card has a boost clock of 1,708MHz while remaining cool and quiet. 1080p performance hits 40 fps, while NVIDIA GameWorks tech creates smooth gameplay and cinematic experience. The card has 1280 CUDA cores and is designed to fit just about any system you have, perfect for hassle-free upgrades.