by
David Beren
Writer
David Beren is a tech writer with 10+ years' experience. He has written and managed content for companies like T-Mobile, Sprint, and TracFone Wireless.
our editorial process
David Beren
TVs

The Rundown
Best Overall:
SuperSonic 24" HDTV at Amazon
"It offers a fantastic price-to-feature ratio."
Best Budget:
Sceptre E246BD at Amazon
"An ideal choice for budget-conscious shoppers who don’t want to skimp on features."
Best for Portability:
Axess 24" 1080p LED HDTV at Amazon
"A 12V car cord adapter is available for powering the Axess while on the road."
Best for Small Spaces:
Proscan PLEDV2488A-E 24" at Amazon
"A great choice for anyone looking to buy a two-in-one TV/DVD combination."
Best for a Child's Bedroom:
SuperSonic 1080p HDTV at Amazon
"Sized just right for even the smallest of small spaces."
Runner-Up, Best for Portability:
NAXA NTD-1955 LED TV at Amazon
"Great for the road where it would fit nicely in a truck or camper and offer plenty of entertainment on-the-go"
Best Design:
Sceptre 32-inch 720p 60Hz TV/DVD at Walmart
"A super-slim silhouette and a rotating swivel base that can adjust up to 20 degrees in each direction."
Runner-Up, Best for Small Spaces:
Sceptre E249BD at Amazon
"For even more space saving, the Sceptre is VESA wall mount compatible." 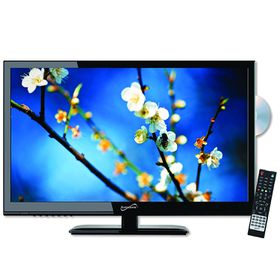 With a 24” screen, the SuperSonic 1080p LED widescreen HDTV offers a fantastic price-to-feature ratio. While SuperSonic makes this unit in a multitude of other screen sizes, the 1920 x 1080-pixel, 24-inch display is their largest TV/DVD LED combination. The addition of HDMI and USB input allow you to boost the television’s capabilities beyond the DVD player with add-ons like Roku, Chromecast or Amazon’s Firestick. Additionally, the inclusion of a PC input provides the option of utilizing the SuperSonic as a computer monitor. As an added bonus, the unit is also SD card ready, so you can plug-and-play and enjoy your favorite music or view photos on the 24-inch display.

Beyond noise reduction and noise interference reduction technology, a 120Hz refresh rate and a bevy of standard features such as sleep timer and multi-language support help the SuperSonic stay in line with today’s top televisions. It shines with the side-loading DVD player that can play standard DVDs, CDs, and CD-RW/RW-formatted discs. Unfortunately, the SuperSonic, like most other TV/DVD combinations, will not play a Blu-ray DVD.

Sceptre’s E246BD 24-inch 720p TV-DVD combination is an ideal choice for budget-conscious shoppers who don’t want to skimp on features. Energy-star ready for energy-conscious homes, the side-loading DVD player is easily controlled via the included remote control that combines both TV and DVD functions. Handy extras such as remembering the last point where you paused a movie or DVD allows easy swapping between videos without needing to rewind or fast forward.

The included USB slot on the back allows owners to view slideshows or listen to music through a portable USB flash drive for extra entertainment value. Added extras such as HDMI, VGA, component and composite inputs help strike a careful balance between ports that are future-proof and also those that can play nicely with older equipment. 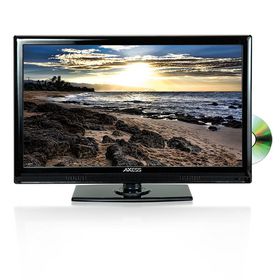 The sleek, side-loading DVD/TV combination from Axess comes in 24-inch and 32-inch varieties, and both include a 1920 x 1080-pixel resolution and 16:9 ratio for great TV viewing. The Axess includes built-in analog and digital tuners to catch favorite programs, as well as an HDMI port to connect any compatible media device such as Chromecast or Apple TV. Additionally, a 12V car cord adapter is available for powering the Axess while on the road, whether you're in an RV or tailgating at your favorite team’s Sunday game. The built-in AC3 decoder allows for full compatibility with Dolby sound for theater-like quality. Alongside its side-loading DVD player capable of playing all forms of DVD, including CD/R and CD/RW, there is additional support for SD cards for viewing images and pictures. A USB port is also available in support of third-party connectivity options. 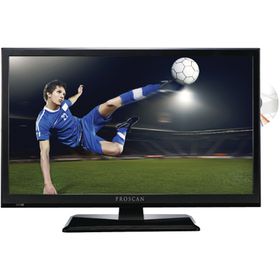 Versatile, sleek and connection-heavy, the Proscan 24-inch LED HD TV is a great choice for anyone looking to buy a two-in-one TV/DVD combination. The included digital ATSC tuner provides over-the-air broadcasts in standout quality with channel control coming via the included remote. The remote offers control of both the television and the DVD player. Additionally, the Proscan is wall mountable via a separately purchased wall mounting kit, but also includes a stand for placement on an entertainment center, dresser, etc.

The side-loading DVD player offers playback for traditional DVDs, but not Blu-ray. However, you will find playback capability for CD/R and CD/RW. Beyond the DVD, there’s an included HDMI port, as well as VGA, audio/video in and a headphone jack for up close and personal DVD viewing. The 24-inch size is perfect for a dorm room, kitchen or small kid’s room where watching DVDs doesn’t allow for a huge television unit. 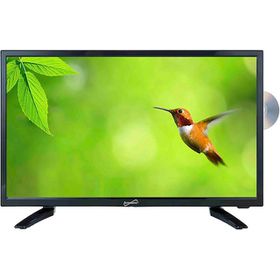 With its 19-inch display, the SuperSonic 1080p HDTV offers an HD display with a built-in DVD player that’s sized just right for even the smallest of small spaces. Measuring just 17.8 x 5.7 x 12.9 inches and weighing only 6.3 pounds, the SuperSonic offers the right balance of all the basics. Your family room TV this is not, but that’s just fine for the combination of price, size and all-in-one functionality. That said, the SuperSonic isn’t completely devoid of extras. There's an HDMI input for enhancing your TV watching and the sound works alongside noise reduction and noise interference to ensure a crisp and clear image is available.

The SD card input allows users to plug-and-play any compatible-sized SD card and enjoy music and photos on the large screen. The same functionality is available over USB as well. Just plug-and-play for music and photos. One added extra that might appeal to home office workers is PC input, which allows the SuperSonic to double as a computer monitor and TV all at once with DVD compatibility baked in for good measure. 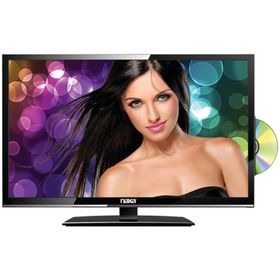 Buy on Amazon Buy on Walmart Buy on Jet

At just 19 inches in size, the NAXA TV/DVD combination is a wonderfully small option that’s perfect for a small room or even a kitchen counter. The size and setup of the NAXA make it great for the road where it would fit nicely in a truck or camper and offer plenty of entertainment on-the-go. Small stature aside, the NAXA is full of inputs, including HDMI and USB for third-party plugins, as well as an SD card for loading pictures and video from a camera or computer. As a side-loading DVD player, the NAXA has the regular feature set, including CD/R and CD/RW playback, but lacks Blu-ray capability. The smaller size does require some finagling to find the right viewing angle, but it’s a small price to pay for a TV/DVD combination that’s RV- friendly. Its size might be perfect for road-warriors but homeowners will find wall mounting easy with a separately purchased wall mounting bracket. 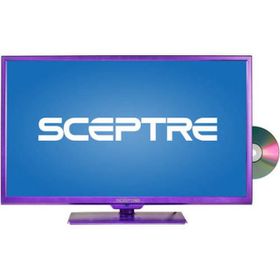 While most televisions these days come in any color you want so long as it’s black, the Sceptre 32-inch 720p 60Hz TV/DVD combination offers vibrant purple and gold options to break up the monotony. On top of its unique coloring, the Sceptre shines in the design department yet again with a super-slim silhouette and a rotating swivel base that can adjust up to 20 degrees in each direction for finding the ideal view in any sized room. Beyond design, the inclusion of MEMC 120 (Motion Estimation and Motion Compensation) help action sequences, sporting events and video games, whether on television or DVD, feel crisp and natural from frame-to-frame.

The side-loading built-in DVD player adds the extra flavor of killing two birds with one stone, no external DVD player required. The single remote control can command both the television and DVD functions right out of the box without any additional setup. The TV also comes with three HDMI ports so you can connect your streaming device, gaming system, and more.

Unfortunately, not every room in a home or office is built with 70-inch televisions in mind, so you may need something a little smaller. Enter the Sceptre 24-inch 1080p E249BD with its excellent display and energy-star efficiency for utility savings over the life of the television. With its built-in DVD player, you’ll find every reason to make yourself right at home in a smaller room and binge watch that old DVD collection you’ve previously stored in the closet.

A single remote control helps eliminate the need for multiple controllers with both the TV and remote operated from the same point of contact. The inclusion of MHL helps provide an easy way to watch multimedia (movies, TV shows and music) directly from your MHL-enabled smartphone. Another multimedia extra is the USB port on the rear of the television that lets you easily connect a flash drive and play music or watch a slideshow right on the display of the television. For even more space saving, the Sceptre is VESA wall mount compatible, making it ready for hanging right out of the box with a separately purchased mount.

What to Look for in an LCD TV/DVD Player Combo

Resolution - You can save some money by choosing a 720p TV/DVD player combo if you plan on using it in a child’s room, guest room, or anywhere else where the space is too limited to support a large television. If you want a bigger TV that will see regular use in a large media or living room, select a TV that supports 1080p and includes a built-in DVD player that’s good at upscaling your DVDs.

Playing CDs - A lot of TV/DVD combos can play music CDs, but support for burned CDs is less of a guarantee. If you want to play music from CDs you burn yourself, look for a TV/DVD combo that supports CD-R/CD-RW discs.

Blu-ray - Most LCD TV/DVD player combos can’t play Blu-ray. If you have a large library of Blu-ray movies, look for a TV/Blu-ray combo. Most TV/Blu-ray combos can play both DVDs and CDs in addition to Blu-ray. Just make sure to choose one with 1080p resolution to take full advantage of the Blu-ray functionality.