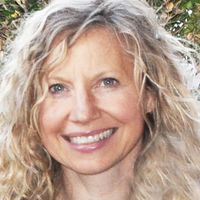 If your iPad seems to be stuck on a black screen and doesn't respond to touch, apply one of several different fixes to get your iPad working again. Start with the simplest solution and work your way through tougher possible solutions.

Press and hold the Sleep/Wake Button for at least 30 seconds, or until you see the Apple logo. This step forces a hardware shutdown that should override any software glitches that prevent normal operation.

If your iPad presents a black screen, the problem could be that the battery is depleted. If the battery is too low to support a low-battery message, the iPad doesn't have enough power to display the charging symbol.

The iPad has a larger battery than the iPhone. Charge the iPad with either a 10-watt or 12-watt charger, or it will take a long time to get fully charged. If the battery cannot maintain a charge like it used to, consider replacing the iPad's battery.

Let the iPad charge for at least 20 minutes or overnight.

If the iPad is too hot or too cold, it won't charge. If the iPad has been in freezing or hot temperatures for a while, bring the iPad to room temperature, then plug it into the charger again.

If you frequently experience a full battery discharge problem, a rogue app may be the culprit. Go to Settings > Battery and scroll down to explore power usage. Apps that consume the most battery are at the top, with the percentage at the side.

If an app consumes a large amount of battery power, close or uninstall the app, then see if the problem goes away.

Sometimes an iPad doesn't charge properly because the charging point is dirty, and the device doesn't get a full charge. Dust or dirt could be inside the port. Every time you plug the charging port into the device, dirt and dust are compressed in the port. Use a non-metal tool, like a wooden toothpick, to dislodge the dust, then charge the device again.

Some iPad users have reported on forums that burping the iPad realigns internal cables that aren't properly connecting. To burp an iPad:

If this procedure fixes the problem, the iPad suffers a hardware problem that will likely occur again. Consider taking your iPad to the Apple Store for repairs.

If you tried all the above fixes and your iPad screen is still black, try a system update.

You'll need a computer that has the latest version of iTunes installed. In early 2019, Apple discontinued iTunes for Mac, although iTunes for Windows is slated to remain active until 2021 or later.

A System Restore is your last resort, as this step erases the data on the iPad. If you backed up your data to the cloud, your data reinstalls after the restore successfully completes. If you haven't, take your device to an authorized Apple repair technician to see if there's a problem with the screen or if another hardware glitch affects your iPad. After your device is repaired, you may not need to do a System Restore.

If you still need to complete a System Restore: