Rajat Sharma
Writer
Rajat Sharma is a tech writer whose writing has appeared on sites like I Love Free Software andBeebom and he's written for, ZEE Media Enterprises Limited and The Times Group.
lifewire's editorial guidelines

Thanks to the continued advancements in the field of digital photography, you no longer have to shell out a fortune to get a decent camera. In fact, even for less than $400, you can choose from a multitude of feature-rich digital cameras like the Canon EOS Rebel T6. These include everything from bridge cameras—that usually come with long-range zoom lenses, to entry-level DSLRs with kit lenses like the Nikon Coolpix B500—that are aimed at less-experienced users who want to upgrade from point-and-shoot cameras and/or experience the world of serious photography.

While that’s indeed awesome, choosing the right camera can often be a chore, since there are hundreds of options available out there. Therefore, to make things easier for you, we’ve rounded up some of the best cameras under $400 currently on sale. But before you dive in, head over to our guide to choosing a good camera for photography beginners to figure out which of our picks might be right for you. 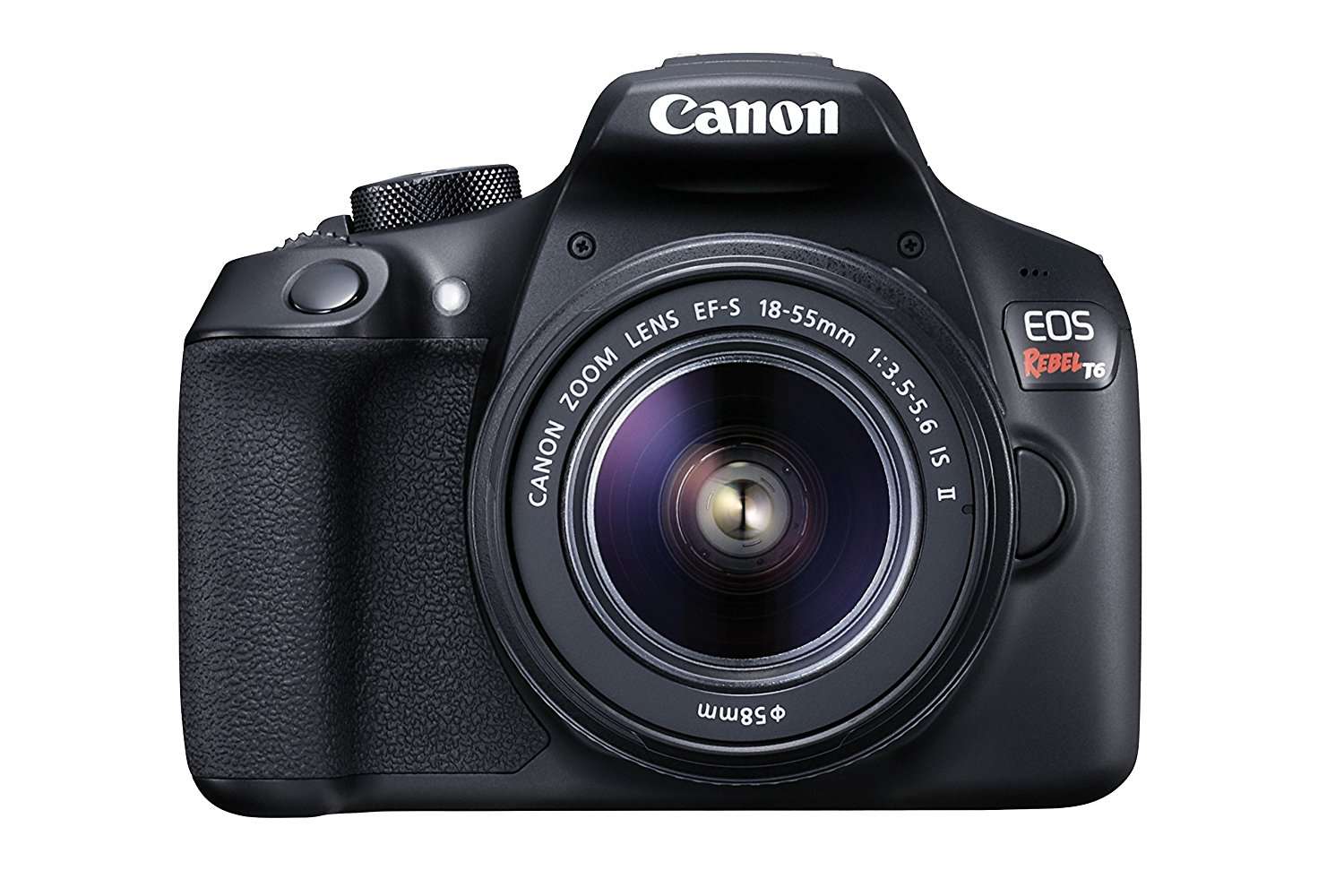 Courtesy of Amazon.com
View On Amazon View On Walmart
What We Like
What We Don't Like
Canon EOS Rebel T6 Review

Offering great all-round performance and a host of features, Canon's EOS Rebel T6 is undeniably one of the best cameras available under $400 today. Also known as the EOS 1300D outside of North America, it comes with an 18MP APS-C sensor that works alongside Canon's "DIGIC 4+" image processor, resulting in sharp and detailed photos. And with a standard ISO range of 100-6400 (expandable to 12800), you can capture amazing photos even in low light conditions. An entry-level DSLR (Digital Single-Lens Reflex) camera, the EOS Rebel T6 includes an EF-S 18-55mm IS II zoom lens that's perfect for everyday photography. However, it's also fully compatible with a huge variety (e.g. macro, wide-angle) of Canon's EF/EF-S lenses. The camera's 9-point AF system allows you to track and shoot even fast-moving subjects easily, while its high-performance optical viewfinder makes composing shots a cakewalk. You also get multiple shooting modes (e.g. Scene Intelligent Auto, Landscape, Night Portrait, Program AE, and Manual Exposure), a 3-inch LCD monitor (with 920k-dot resolution), as well as integrated Wi-Fi and NFC to directly share images with other devices and social media services. Canon EOS Rebel T6 supports continuous shooting at up to 3fps and can record Full-HD videos at up to 30fps too.

"When inspecting images of animals, we could see individual hairs as well as the cracks in skin and water droplets hanging on whiskers. Zoomed out, subjects in focus looked sharp." — Kelsey Simon, Product Tester 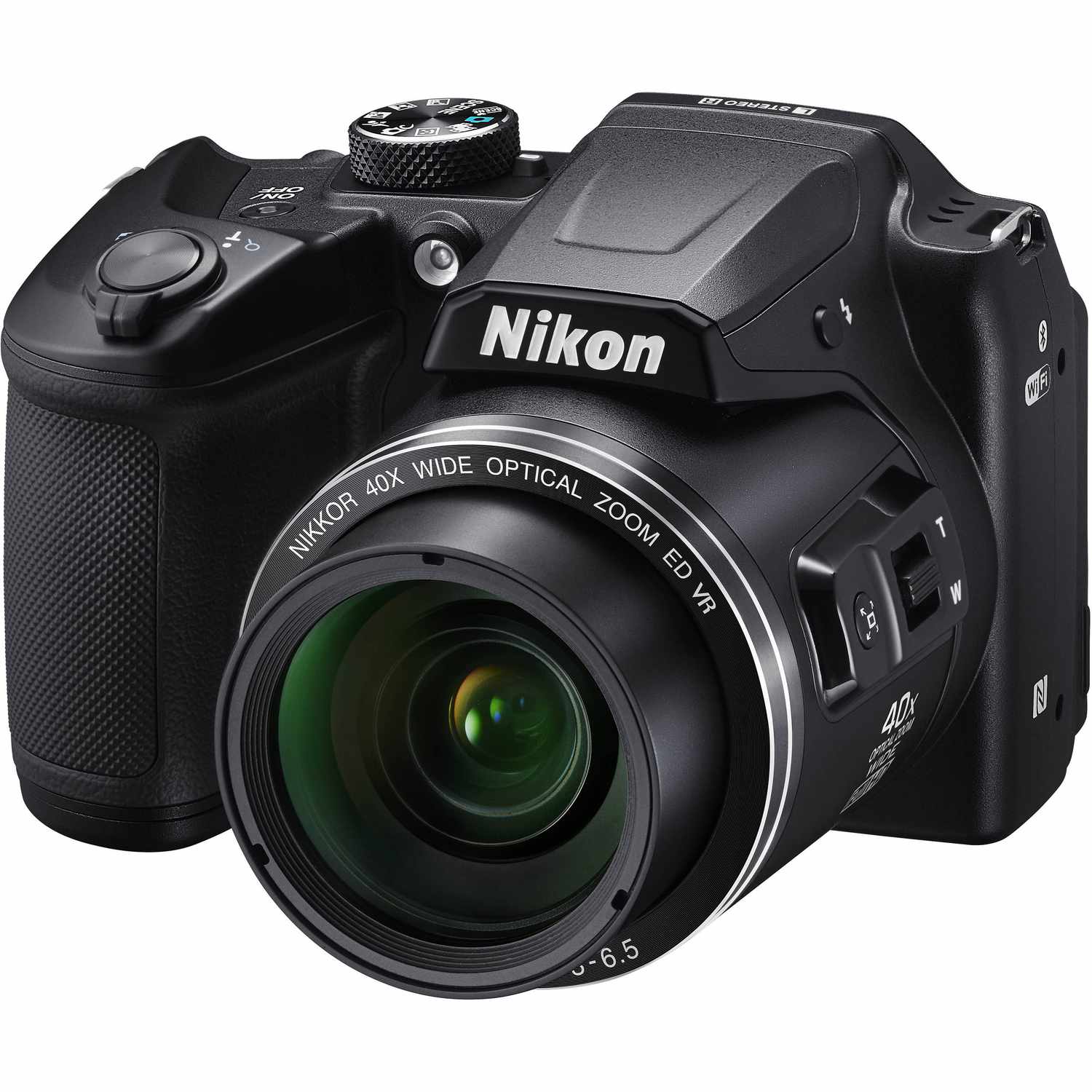 If you think all great cameras cost a pretty penny, Nikon's Coolpix B500 is here to prove you wrong. Despite being priced well under $400, this thing is packed with goodness. The bridge camera sports a 16MP (1/2.3-inch) image sensor, but what truly makes it stand out is the integrated 4.0-160mm Nikkor zoom lens. With a massive optical zoom range of 40x, it lets you shoot incredible close-up pictures of even the furthest of subjects (e.g. birds, The Moon) with little to no effort. Throughout the entire zoom range, the camera's optical lens-based VR (Vibration Reduction) technology helps in stabilizing shots, giving you clear photos. The Coolpix B500 comes with numerous shooting modes (e.g. Auto, Scene, and Creative), each having a variety of presets that are programmed to help you get the best photos. Thanks to a 3-inch tilting LCD monitor (with 921k-dot resolution), you can frame shots even from tricky angles with ease. For connectivity and I/O, there's Wi-Fi, NFC, Bluetooth, micro HDMI, and USB included in the mix. Among other noteworthy features are a standard ISO range of 125-1600 (6400 in Auto Mode), contrast-detect AF system, and Full-HD video recording at up to 60fps.

"It’s not as portable as some other digital cameras with Wi-Fi capabilities, being nearly two times larger than average." — Hayley Prokos, Product Tester 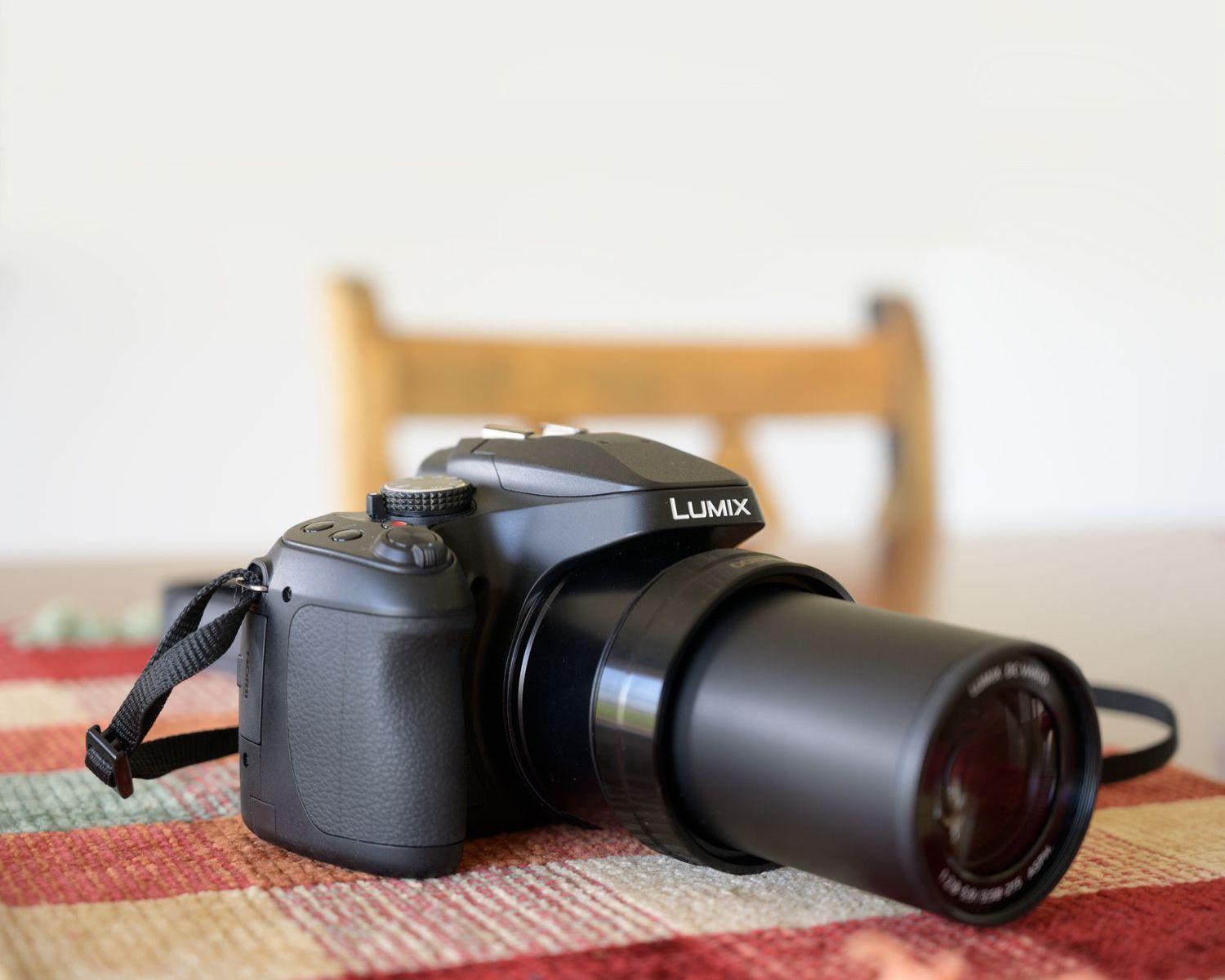 Even though almost all still cameras can shoot videos these days, they all pale in comparison to Panasonic's Lumix FZ80. Its 18.1MP (1/2.3-inch) image sensor works alongside the built-in 20-1200mm DC Vario zoom lens, giving you awesome picture quality over an insane optical zoom range of 60x. And with OIS (Optical Image Stabilization), there's no loss of visual detail even at maximum zoom range. The bridge camera can shoot macro photos with a minimum focusing distance as just 1cm, with Panasonic's DFD (Depth From Defocus) technology enabling continuous shooting at up to 10fps. That's all well and good - but as mentioned before - the Lumix FZ80's real highlight is its stellar video recording chops. The camera lets you capture spectacular 4K footage (having a bit-rate of 100Mbps) at up to 30fps. Not just that, its "4K Live Cropping" feature allows only the recording frame to be moved (while the camera stays fixed), thus allowing for smooth panning. You can even save individual frames of 4K videos as still photos. In terms of connectivity options, Panasonic Lumix FZ80 comes with Wi-Fi, micro HDMI, and USB. Other notable additions include focus peaking, a 3-inch LCD monitor (with 1040k-dot resolution and touch input), and a plethora of shooting modes. 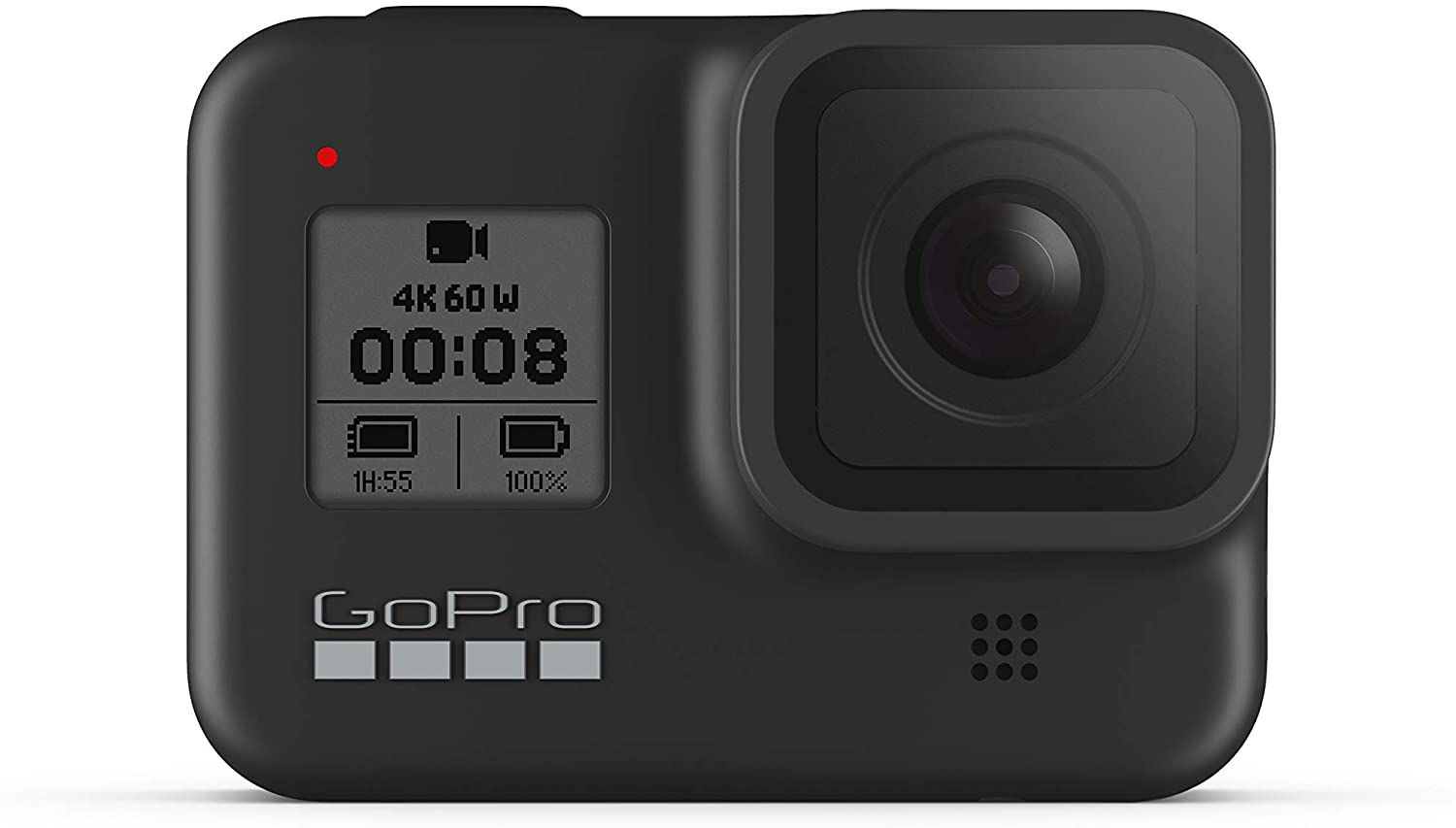 If you're on the hunt for a feature-laden action camera for all your adventures, GoPro's Hero8 Black is exactly what you need. Boasting a 12MP image sensor with improved HDR support, it lets you capture fantastic photos with enhanced contrast and rich visual detail. The camera's "LiveBurst" mode shoots 1.5 seconds before and after the shutter is pressed, allowing you to choose the best photo out of 90 stills. And with shutter speeds of up to thirty seconds, even the pictures took at night come out to be great. That being said, video is where the Hero8 Black truly excels. Using GoPro's "HyperSmooth 2.0" technology - which includes multiple stabilization levels and horizon leveling - the camera can record super-smooth 4K action videos at up to 60fps, and Full-HD videos at up to 240fps. You also get four "digital lenses" (i.e. Narrow, Distortion-Free Linear, Wide, and SuperView) to choose from, the ability to record time-lapse videos (with multiple resolutions and automatic/manual speed selection), and much more. For I/O and connectivity, everything from Wi-Fi and Bluetooth, to GPS and USB Type-C is included onboard. GoPro Hero8 Black features a compact yet rugged design and is waterproof up to a depth of 33 feet as well. 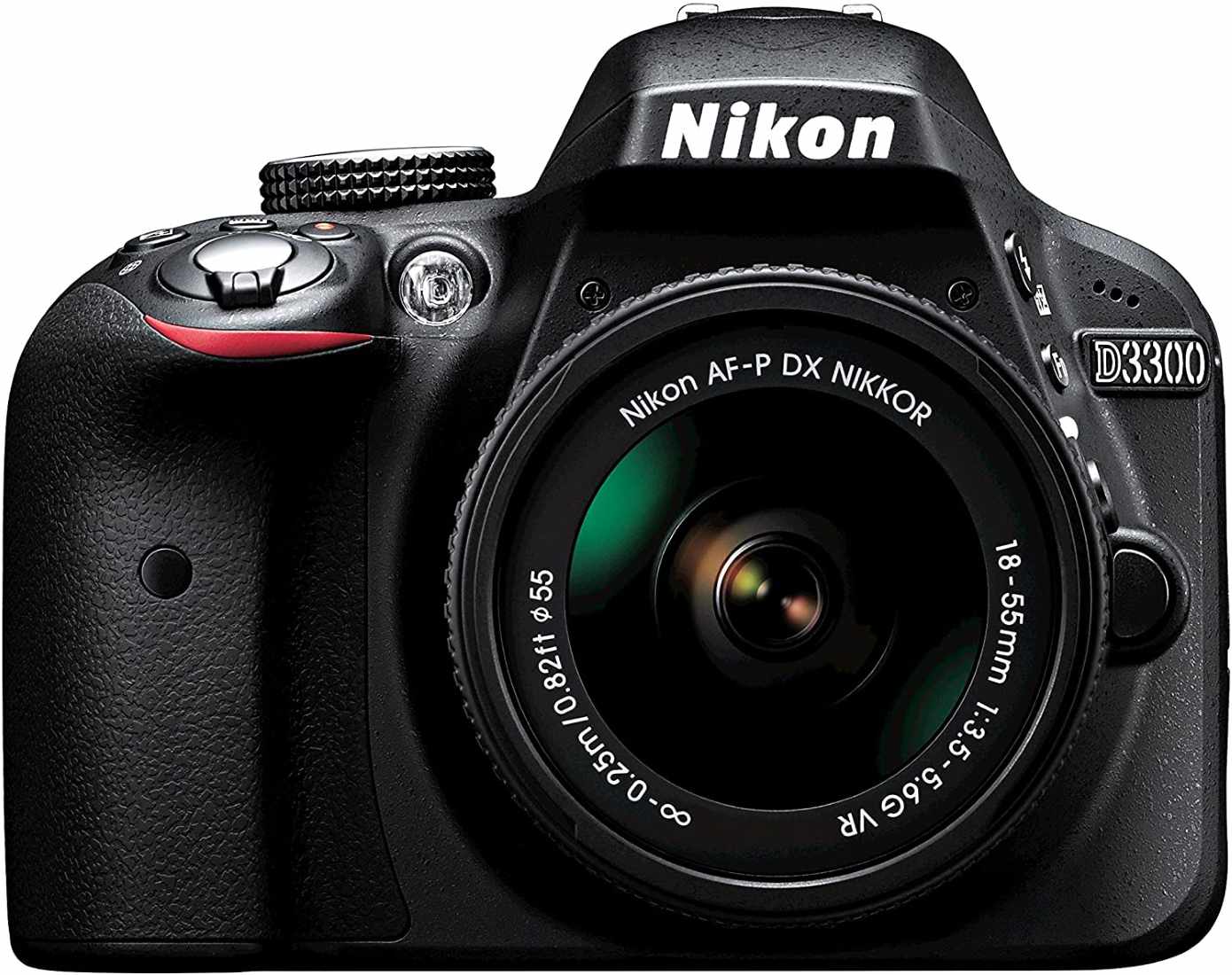 Renowned for their superior picture quality, DSLR (Digital Single-Lens Reflex) cameras usually tend to be on the pricier side. However, there are also quite a few excellent affordable options you can go for, a case in point being Nikon's D3300. Its 24.2MP APS-C sensor works in tandem with an AF-S DX Nikkor 18-55mm VR II zoom lens, delivering clear and vibrant photos. Moreover, full compatibility with a wide range (e.g. macro, telephoto) of Nikon's Nikkor lenses means you can extend the camera's functionality even further. The camera's 11-point AF system makes tracking and shooting even fast-moving subjects an effortless affair, while continuous shooting at up to 5fps lets you get the perfect shot, every time the shutter button is pressed. Low light photography isn't an issue either, thanks to a standard ISO range of 100-12,800 and Nikon's "Active D-Lighting" technology. The D3300 comes with many shooting modes, and even supports direct editing (e.g. cropping, color changes) of photos without additional software or tools. Talking about connectivity options, you get Wi-Fi, mini HDMI, USB, and 3.5mm audio. Some other notable mentions include a 3-inch LCD monitor (with 921k-dot resolution), Full-HD video capture at up to 60fps, and a built-in microphone. 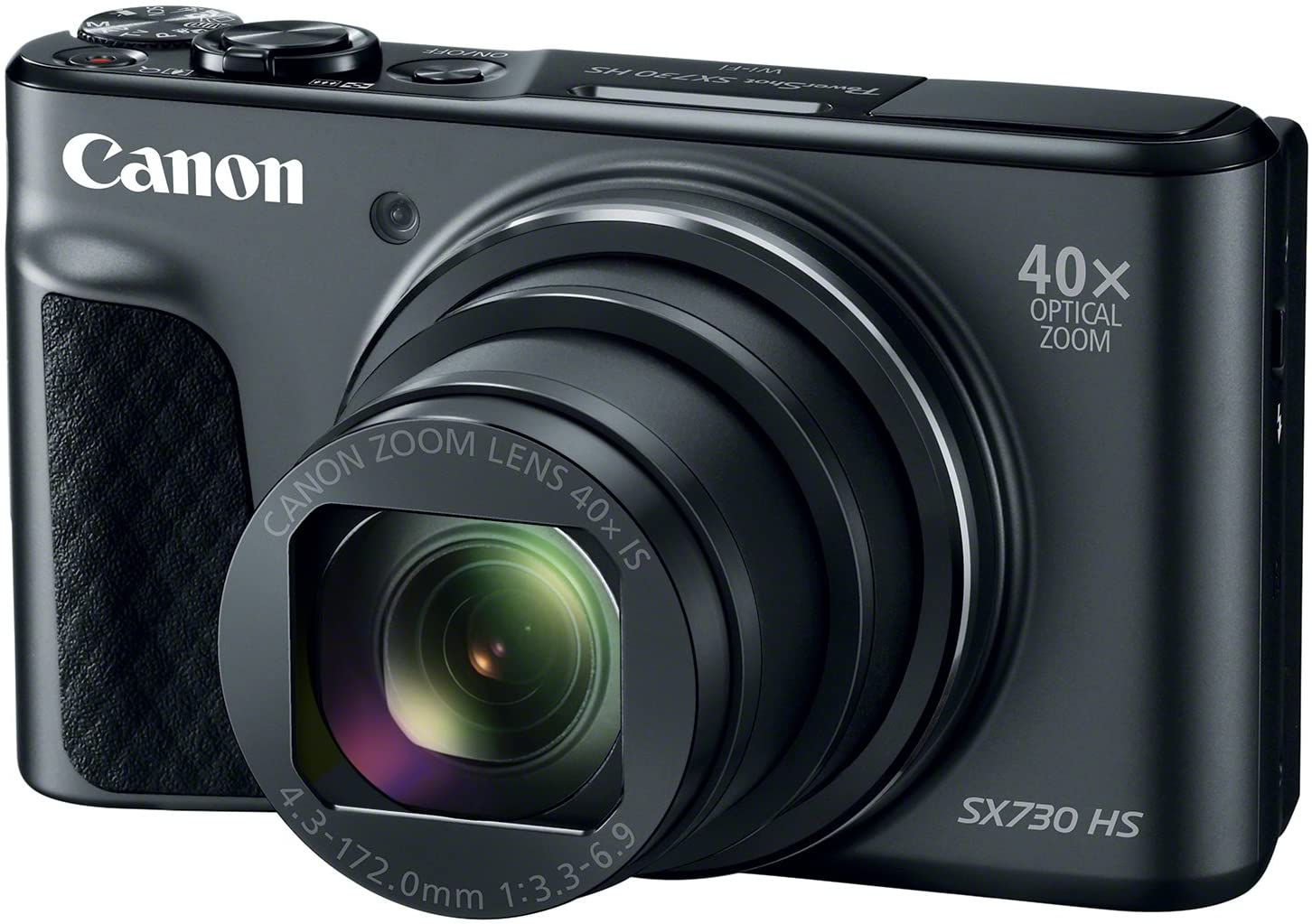 Do you like taking photos and sharing them with others? If the answer's yes, Canon's PowerShot SX730 HS is for you. Featuring a 20.3MP (1/2.3-inch) sensor and Canon's "DIGIC 6" image processor, this thing shoots impressive pictures with increased visual clarity. Its integrated 4.3-172mm zoom lens delivers an astounding optical zoom range of 40x, with intelligent IS (Image Stabilization) resulting in sharp photos throughout the entire zoom range. The PowerShot SX730 HS boasts a 9-point AF system and can focus on subjects as close as just 1cm for macro photography. You also get multiple shooting modes (e.g. Aperture Priority AE, Soft Focus, Creative Shot, and Miniature Effect), including a Smart Auto mode that features more than 50 preset scenes. The camera's 3-inch LCD monitor (having 921k-dot resolution) is arguably one of its most interesting features. It can tilt upwards by 180 degrees, so you can not only shoot from low angles but click great selfies too. As far as I/O and connectivity go - there's Wi-Fi, Bluetooth, NFC, USB, and micro HDMI - allowing you to conveniently share photos with family and friends. The camera comes with a standard ISO range of 100-3200, and also includes the ability to record Full-HD videos at up to 60fps.

Packing goodies like a 40x zoom lens, multiple shooting modes, and easy wireless connectivity in a slim and well-designed chassis, Canon’s PowerShot SX730 HS is perfect for those who love capturing photos and sharing them with others. — Rajat Sharma, Tech Writer

As versatile and feature-packed as all of the above-mentioned cameras are, we have no qualms recommending Canon’s EOS Rebel T6 (view at Amazon) as our top choice. The entry-level DSLR delivers superb image quality for its price and can be easily upgraded with more powerful lenses whenever you feel like. If you’d rather have something a bit simpler, we suggest going for Nikon’s Coolpix B500 (view at Amazon). It gives you the reliability of a point-and-shoot camera, and its massive 40x zoom lens works wonders for taking close-up shots of distant subjects.

Having been in the ever-changing field of technology journalism for more than six years now, Rajat Sharma has tested and reviewed dozens of cameras over the course of his career so far. Before joining Lifewire, he was associated as a senior technology writer/editor with two of India’s biggest media houses - The Times Group and Zee Entertainment Enterprises Limited.

Kelsey Simon is an Atlanta-based writer and librarian. She has a master's degree in library and information sciences and is passionate about video games.

Hayley Prokos is a tech writer and former Newsweek reporting fellow. Her articles have appeared at SELF.com, Kathimerini English Edition, and others.