The Best DVD Recorders of 2020

Many manufacturers are no longer making new DVD recorders for the U.S. market. Some that still do are selling the same models that they introduced two, or more, years ago. Also, some of the following units listed may be officially discontinued, but may still be available at local retailers, or from third party sources, such as eBay.

Although most consumer electronics manufacturers have abandoned DVD recorders, Magnavox is not only still carrying the torch but has come out with some innovative features on its 2015/16 models.

The MDR-867H/MDR868H are DVD/Hard Drive recorders that include 2-tuners, which allow the recording of two channels simultaneously (one on the hard drive, and one on DVD) the ability to record one channel and watch a live channel at the same time. However, there is a catch - the built-in tuners will only receive over-the-air digital and HD TV broadcasts - it is not compatible with cable or satellite. It does not include analog TV signal reception.

If the built-in 1TB (867H) or 2TB (868H) hard drive storage capacity is not enough, you can expand either unit via a compatible USB hard drive. Magnavox suggestions the Seagate Expansion and Backup Plus Series and Western Digital's My Passport and My Book Series.

Another innovative feature is the inclusion of both Ethernet and Wi-Fi connectivity.

Consumers can watch live TV received by the MDR867H/868H's tuners or hard drive recordings, and even download up to 3 recorded programs from the hard drive onto compatible smartphones and tablets using a wireless home network and a free downloadable app.

However, despite network connectivity, the MDR868H does not provide internet streaming content, such as Netflix.

The MDR865H starts with a built-in ATSC tuner to receive and record digital and HD TV over-the-air broadcasts.

However, any recordings made in HD will be down-converted for recording onto DVD. On the other hand, when you play DVDs (either commercial or home recorded), 1080p upscaling is provided via the HDMI output.

One added feature is that you can expand the hard drive storage capacity of the MDR865H using the provided USB port. Magnavox suggests the Seagate Expansion and Backup Plus Series and Western Digital's My Passport and My Book Series.

Here is a budget-priced DVD recorder with convenient features. The Toshiba DR430 offers DVD-R/-RW and +R/+RW format recording with Auto Finalization, a front-panel DV-input for connecting digital camcorders HDMI output with 1080p upscaling. The DR430 can also play MP3-CDs, as well as standard audio CDs. However, the DR-430 does not have a built-in tune, so it is necessary to use an external cable or satellite box to record television programs. If you subscribe to cable or satellite, use a box, and have an HDTV to access the 430's 1080p upscaling video output capability, this DVD recorder might be a good match for your entertainment setup. 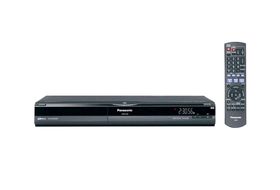 The Panasonic DMR-EZ28K is an excellent entry-level DVD recorder that includes an ATSC tuner. This allows the reception and recording of over-the-air digital TV signals, which replaced analog signals, effective June 12, 2009. In addition to an ATSC tuner, the DMR-EZ28K also includes other great features, such as compatibility with most DVD recording formats, a DV input for recording from digital camcorders, and 1080p upscaling via HDMI output. Another bonus is Panasonic's enhanced playback quality on discs recorded using the four-hour LP mode. When comparing the LP mode playback on Panasonic DVD recorders and most other brands, you can tell the difference. 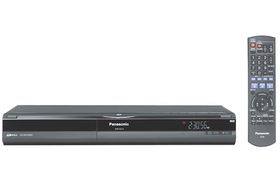 The Panasonic DMR-EA18K an entry-level DVD recorder that requires an external tuner, such as a cable box, satellite box, or DTV converter box, to receive and record television programming. However, the DMR-EA18K does include compatibility with most DVD recording formats, a DV input for recording from digital camcorders, USB, and SD card slot for digital still image playback, both progressive scan component video outputs, and 1080p upscaling via its HDMI output. Another bonus is Panasonic's enhanced playback quality on discs recorded using the four hour LP mode. The EA18K can also play Divx files. When comparing the LP mode playback on Panasonic DVD recorders and most other brands, you can tell the difference.

What to Look for in a DVD Recorder

Price - Oddly enough, this fairly dated piece of technology is often outrageously expensive on online marketplaces. This is due to their waning relevance. However, you can still find reasonable deals out there so be sure to compare prices before buying if budget is a concern for you.

Design - Given that DVD recorders are on their way out, their designs haven’t exactly been a priority for manufacturers. As such, they tend to be clunkier than newer technology out there. Still, most are slim enough to stow away in a drawer until you need it.

Additional features - At their most basic, DVD recorders can replace a VCR, but newer models have several neat features that offer distinct advantages. For example, some have multiple tuners, which allow you to record multiple channels simultaneously (one to the DVD and one to the hard drive). Other DVD recorders have Ethernet and Wi-Fi connectivity, though it’s important to note that this doesn’t mean they can support streaming content like Netflix.