Thunder and lightning? Not so frightening.

If you're still crowding all of your appliances into a single off-white power strip you stole from your roommate you could be putting your power sensitive electronics at risk. Start protecting your expensive electronics like a grownup by investing in an uninterruptible power supply or UPS. These relatively unassuming black bricks greatly expand the capacity of your wall outlets by not only providing you with additional outlets and surge protection but also providing your devices with power in the event of an outage, thanks to a built-in battery.

There are tons of options ranging from consumer to commercial applications, but today we'll be comparing a pair of our most popular models from APC and Cyberpower to figure out which model is best for you. While these accessories are probably the least attractive part of any home office or living room setup, they are a handy bit of everyday insurance for some of your more sensitive electronics. 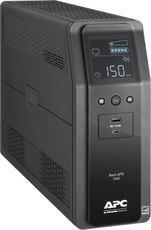 While aesthetics are hardly the strong suit of any UPS, both of these models come equipped with some interesting design choices that make them easier to use. Both models are equipped with front-facing led panels that display the current load of the UPS, the battery charge, and the predetermined input voltage.

One key difference here, however, is that the LED screen for the CyberPower can be tilted upwards, allowing you to view the screen without having to get down on the ground. APC has taken a slightly different approach, lobbing off the top corner of the UPS to make space for an LED screen that's always looking up at you.

Both models also include a single USB-A and USB-C port on the front, providing you with an additional charging port, or allowing you to keep your mobile device topped off in the event of an emergency.

Both the CyberPower and APC feature automatic voltage regulation (AVR) as well as an audible alarm if the voltage dramatically changes or the battery has to kick in. While the alarm is enabled by default, there is a mute button on the front panel of both models to disable it. They both also include robust suites of features including scheduling functions, fault detection, and Ethernet surge protection. And, if you happen to be using either UPS as a node between desktop workstations, they both also have the ability to be hard-wired and controlled directly from a desktop via a USB or Serial connection.

There are some small differences between these models as far as power distribution. Because the CyberPower has 2 additional outlets, it is only capable of running at 2.5 minutes on a full battery charge when operating under a full load, compared to the APC, which is capable of operating for up to 4 mins, which can be attributed to its slightly lower load capacity.

Both models do have ample slack in regards to their AC cables, and while it's likely to make very little difference, the APC does have a slightly longer, 6 ft. cable when compared to the CyberPower's 5 ft.

The CyberPower comes equipped with an extra pair of Ethernet ports for slotting in a remote management card, allowing you to monitor and control the UPS remotely. But the APC has a coaxial throughput connection for extending surge protection to your cable modem. So depending on your priorities or the types of devices you'll want to protect, one of these options is going to be slightly better than the other.

The price of both of these models is pretty much the same, each costing a little over $200. And while both of these devices offer the same 3-year warranty, one key difference is that the CyberPower model offers a $500,000 connected equipment guarantee, should any of your devices ever become inoperable as a fault of the UPS, while the APC offers $150,000. Both of these numbers are likely to be substantially more than even the most expensive home theater setup, but if you're using either of these units for commercial application, this might be something to consider.

The winner of this particular matchup is largely going to be determined by the number and types of devices you'll be hooking up to your UPS. If you're hooking up an array of workstations in an office setting, we'd recommend the CyberPower 1500VA UPS, not just for its extensive number of outlets, but also for its extensive connected equipment guarantee and remote management options. However, if you're using a UPS in your own home, the APC 1500VA Pro will provide you with more than ample insurance against any type of electrical disruption.