If you're in for a challenge, these games are for you 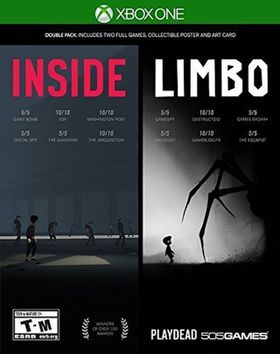 Danish developer Playdead exploded onto the gaming scene with their debut title, 2010’s Limbo. Praised for its inventive visuals and hands-off narrative, the game was an instant success upon its release. But when paired with their latest title, 2016’s Inside, Playdead’s adeptness for puzzle platformers really shines.

Limbo and Inside both reflect on each other in fascinating ways, from having a young boy be the protagonist at their center to the grotesque, yet beautiful imagery that allows the games to come to life. You are driven to complete a wild, twisting cavalcade of challenging puzzles not just for the satisfaction of doing so, but to see more of the two games’ universes grow and expand. Combined with the chilling soundtracks and inventive level design, the worlds of both Inside and Limbo are cold and esoteric ones. But you get drawn into them all the same, and pretty much won’t put them down until you reveal all their secrets. And with this two-game collection, you won’t have to. Combined, they represent the peak of puzzle games available on the Xbox One.

The brainchild of acclaimed video game designer, Jonathan Blow (he also did the wonderful Braid back in 2008), The Witness is one of the most epic and daunting puzzle games available for Xbox One. You are right away transported to a mysterious, varied open-world in which your unnamed protagonist must venture across a huge island completing various tasks and exploring a fair share of distinct locations. The goal? Making it to the top of the mountain at the epicenter of the island and unlocking the secrets therein.

With over 600 puzzles available in the game, you won’t be pressed for things to do in The Witness. And with a litany of unlockable audio logs and quotes from famous people such as Buddha and B.F. Skinner (just to name a few), you won’t fail to be entertained throughout your journey in the world of The Witness. But it's the game’s tricky, subversive puzzle design and intricate stages that will keep you coming back for more.

Trying to find a puzzle game that every member of the family will enjoy can sometimes be a bit of a challenge, as you have to find the right balance of simplicity and fun to satisfy everyone. Thankfully, Popcap’s Peggle 2 is a perfect option, as its straightforward yet rewarding gameplay can provide joy to just about anyone. A sort of riff on pinball and classic Price is Right game Plinko, you play as Bjorn the Unicorn and several of his friends as they try to get a collection of little balls to fall to the bottom and hit the right pegs along the way. It’s that simple -- but so very, very addicting and gratifying.

Even though this game will provide hours of entertainment for children, there’s plenty here for adults to enjoy as well. From the catchy music to the lively art direction, Peggle 2 is a feast for the senses for any age or playstyle. And with hundreds of different levels to play (plus a whole bunch of downloadable content to augment the experiment too), Peggle 2 is guaranteed to stick around in your rotation for quite a while.

What’s more fun than solving puzzles with a buddy? There aren’t a lot of options on the Xbox One, but by far one of the most inspired is A Way Out, a split-screen story-based adventure game that puts you in the shoes of Vincent and Leo, two prisoners engaged in a high stakes prison breakout. It’s the first game to require two people to play together, and if you buy a copy you can gift a friend one as well. The plot is immersive, pulling you into the experience of the convicts at its center, with many twists and turns complicating Vincent and Leo’s path toward freedom.

Of course, what makes the experience truly shine is its cooperative gameplay, which can be both accomplished online or in-person via split-screen. Having another person at your side to solve the game’s many environmental and situational puzzles makes a huge difference, and only further makes the game one of the most rewarding puzzle experiences you can currently find on the Xbox One. 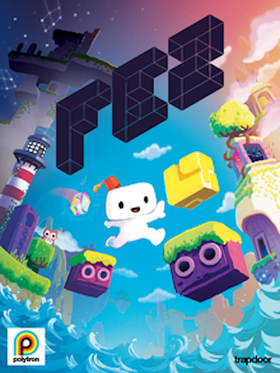 Fez is an intricately designed puzzle-platform game with a very compelling conceit. Not only can you traverse the world of the main character Gomez through the prism of two dimensions — but you can also rotate it around completely to make for a more three-dimensional, rounded view.

This, of course, leads to a variety of mind-bending challenges in which you must figure out the right angle to take — sometimes quite literally — to make your way across the game’s many stages. It’s an experience unlike any other puzzle game out there, and the fact that it was all created solely through the work of independent developer Phil Fish and his team at Polytron Corporation makes it even more astonishing. Our favorite part of Fez is the codebreaking you’ll have to do to unveil the mystery of the game’s hidden language, so prepare to put on your thinking cap.

Heavily inspired by the story-based works of Telltale Games, Life is Strange is divided into five distinct episodes, like a TV show. Each one tells and expands the story of Max Caulfield, an 18-year-old girl who returns to small-town Oregon after years away from her home. She attends the prestigious Blackwell Academy and deals with the usual issues a teenager returning home might face: friends, relationships, school troubles, etc. But Max also has to deal with an unforeseen complication, her newfound ability to control and rewind time.

This time travel is what gives Life is Strange it’s most unforgettable moments and unlocks some creative and varied puzzles in the process. With its choice-based decision system, you encounter many different puzzles of both the environmental and human variety. And though the ability to rewind past actions opens up a whole new way to approach the games’ many challenges, it also creates a whole mess of strife in the life of Max. Seeing the branching paths that the story can take will propel you through its five-episode story multiple times so you can see what your various choices and decisions affect. Everything you say and do has consequences on future episodes, so think carefully about how you progress through the narrative.

Very few games make as much of an emotional mark than Valiant Hearts: The Great War, Ubisoft’s grand experiment in puzzle game design. You play as four distinct characters within the game: the Frenchman Emile, his German son-in-law Karl, American soldier Freddie, and Belgian nurse Anna. Inspired by actual letters written during World War I, the game has you traverse through an impeccably designed, stylized battlefield on your mission to help a young German soldier in finding his lost love.

The puzzles in the game are challenging, yes, but also have a strong emotional undercurrent at their very core. For those who might scoff at the idea of a puzzle game being able to offer moments of huge emotional catharsis, Valiant Hearts is a perfect example of what the medium can achieve narratively at its very best. It’s available on pretty much every platform you can think of in addition to the Xbox One: Windows PCs, PlayStation 3, PlayStation 4, Xbox 360, Nintendo Switch, Android devices, iOS devices.