Upgrade your set-up with these gaming keyboards and mice

The Rundown
Best Overall:
Razer Turret Keyboard and Mouse at Amazon
"As the first and only officially licensed keyboard and mouse for Xbox One, the Razer Turret sort of wins by default."
Best Keyboard:
Corsair K63 Keyboard and Lapboard at Amazon
"The Corsair K63 keyboard pairs well with the Xbox One, especially when you opt for the lapboard setup."
Best Budget:
Logitech G213 Gaming Keyboard at Best Buy
"For a budget price, you can get the compact G213 that works well with the Xbox One."
Best Membrane:
Razer Cynosa Chroma at Amazon
"For those who don't like hearing the constant clicking of mechanical switches, Razer has an option for you."
Best Wired:
HyperX Alloy FPS at Amazon
"Offers great build quality, excellent mechanical keys for gaming, and a full but compact design that stands out."
Best Mouse:
Corsair M65 Elite RGB at Amazon
"A gaming mouse with robust customization, style, and a great feel."
Runner-up, Best Mouse:
Logitech G502 Hero at Amazon
"A monster and a great choice for Xbox One users who also want to use their new mouse for PC games, too."
Best Ambidextrous:
Razer Lancehead TE at Amazon
"The understated ambidextrous design supports comfort no matter if you’re right or left-handed."

Buy on Amazon Buy on Dell Buy on Razer.com

As the first and only officially licensed keyboard and mouse for Xbox One, the Razer Turret sort of wins by default. That doesn’t mean it doesn’t deserve the victory, though. Both the keyboard and mouse are premium quality. Using a 2.4GHz wireless connection, you can game on the couch without those pesky cords. It's designed to comfortably rest on your lap, with an ergonomic wrist rest providing support.

The Turret is fitted with mechanical switches that promote fast response times and offer an incredibly satisfying response. The keyboard has a built-in Xbox key to pull up the Xbox One dashboard — a convenient feature you won’t find anywhere else. With Razer Chroma RGB lighting built-in, you can program dynamic lighting effects to fit your preference.

As for the mouse, the retractable pad is a stealthy and practical addition. The pad is magnetic to keep the mouse from sliding too far while playing. This 16,000 DPI gaming mouse has a clickable scroll wheel with tactile grip, two mechanical buttons below the wheel, and two on the side for your thumb.

The Razer Turret is pricey, but you get an excellent mouse and keyboard combo that was specifically designed with the Xbox One in mind. The keyboard can last up to 43 hours on a charge (11 with RGB lighting on), while the mouse can last up to 50 hours (30 with RGB lighting on). The only real problem with the Turret is that it's not suitable for lefties because of the mouse pad location.

The Corsair K63 keyboard pairs well with the Xbox One, especially when you opt for the lapboard setup. The lapboard has a memory foam wrist rest to make gaming on the couch comfortable. The cloth mouse pad on the right side of the keyboard isn’t fancy, but it's spacious and gets the job done. The lapboard isn't permanently attached to the keyboard, and it's quick and simple to pop it on or off.

The K63 uses Cherry MX Red mechanical switches, which provide a smooth and quick typing experience that will benefit you whether you're gaming on Xbox One or working on PC. The keyboard is backlit with blue LEDs that can be adjusted for brightness. The K63 can be used either wirelessly with a 2.4GHz connection or Bluetooth, or wired via USB. A single charge will get you up to 15 hours of battery life.

The K63 is one of Corsair’s best wireless keyboards for PC. With the lapboard, it turns into the best keyboard for Xbox One not named the Razer Turret. 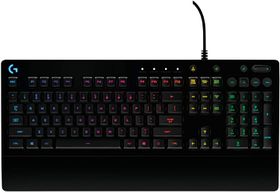 Logitech’s G Series is one of the best gaming peripheral lines today. For a budget price, you can get the compact G213 that works well with the Xbox One. Let's get this out of the way: The G213 is a wired keyboard, which may be a dealbreaker depending on your setup. It also doesn’t include a lapboard.

However, the G213’s design still makes it a comfortable keyboard to rest on your lap, as it features a built-in palm rest and slightly raised chassis. Still, we’d recommend pairing it with a lapboard, simply because you'll need a spot for a mouse (not included). The G213 has Logitech's own "Mech-Dome" mechanical switches, which are both quiet and lightning-fast. RGB lighting gives the G213 that sought after gamer look and the G213 is also spill-resistant up to 60ml, so small amounts of liquid won't break the keys.

Buy on Amazon Buy on Best Buy Buy on Razer.com

For those who don't like hearing the constant clicking of mechanical switches, Razer has an option for you. The Razer Cynosa uses membrane keys, the sort most people are used to typing with on a daily basis. The Cynosa is wired and it doesn't come with a wrist rest. However, its raised frame gives it a backbone that most standard keyboards lack.

With a number pad on the right, the Cynosa is larger than other keyboards on this list. However, the additional real estate can be a nice feature, as it spaces everything out. The Cynosa has Razer Chroma RGB lighting and a spill-resistant design.

Even with membrane keys, the Cynosa is still very much a gaming keyboard. Features like N-Key rollover with anti-ghosting technology allow you to complete up to ten commands at once and while you can't move as quickly across the keys as you would with mechanical switches, the Cynosa is much quieter.

If you're planning on playing on the couch, a lapboard would be an ideal accessory for the Cynosa. That said, if you’re at your desk, the Cynosa could double as your daily PC keyboard for work and play.

A full size wired keyboard in a compact frame, the HyperX Alloy FPS is specifically designed with shooters in mind. Fortnite, Warframe, and even Gears 5 fans should consider the Alloy FPS for their Xbox One keyboard needs, especially if you game at your desk.

The Alloy FPS has virtually zero edges along the perimeter. That doesn’t mean it’s not durable, though. The solid steel frame gives the Alloy FPS a sturdy feel. You can choose between three mechanical switches: Red, Blue, or Brown. Cherry MX Red is the most popular for gaming due to swift, linear actuation. Cherry MX Browns are similar, but offer a tactile bump with each keystroke, while Cherry MX Blues provide an audible click for each keypress. Red textured WASD keycaps are a nice touch that go well with the red backlighting effects.

If you're gaming on the couch, the Alloy FPS is one you absolutely need a lapboard to use comfortably. Still, it offers great build quality, excellent mechanical keys for gaming, and a full but compact design that stands out.

A gaming mouse with robust customization, style, and a great feel, the Corsair M65 Elite RGB is our pick for the best mouse to pair with a keyboard on Xbox One. It starts with the anodized aluminum frame, a lightweight but premium material that’s designed to hold up over time. You can adjust the M65's center of gravity and reduce its weight to find what’s most comfortable for you.

The M65 has an 18,000 DPI optical sensor for precise and fast movement registration. With gaming, you want more than just left and right clicks. The M65 satisfies this need with a tactile scroll wheel, two buttons below it, and three buttons on the side. The most notable of which is a "Precision Sniper" button which allows you to quickly toggle between DPI settings for those quick snap-shots.

Thanks to a great curved design on the button side, your hand can rest comfortably while your thumb is readied over the sniper button. Considering the features and quality, the M65 is loaded with value.

Buy on Amazon Buy on Best Buy Buy on Logitechg.com

Logitech's G502 has been a popular gaming mouse for more than five years. In 2018, Logitech fitted it with a new sensor and dubbed it the G502 Hero. This upgraded 16,000 DPI sensor is incredibly accurate and perfect for games like Apex Legends or Destiny 2.

The Hero’s button layout might be overkill for some. Along with the standard left and right clicks, there are two buttons on the top left side and three buttons on the thumb side. The top buttons feel a bit impractical, but are present and can be remapped with the Logitech G software. There's also a button below the awesome, adjustable scroll wheel for quickly adjusting DPI steps.

Just like Corsair's M65, you can adjust the weight of the mouse to your liking. The G502 also has RGB lighting. The angular design is distinct and takes some getting used to, but the G502 is a monster and a great choice for Xbox One users who also want to use their new mouse for PC games, too.

Buy on Amazon Buy on Razer.com

Lefties have fewer options when it comes to gaming mice. Thankfully, the Razer Lancehead TE was designed with southpaws in mind. The understated ambidextrous design supports comfort no matter if you’re right or left-handed and the 16,000 DPI optical sensor can be adjusted to your liking with the buttons below the rubberized scroll wheel.

Two buttons are located on each side of the Lancehead TE giving it eight buttons in total, but in practice, you’ll probably only use the side buttons where your thumb rests. This will be more than enough for most of the games with mouse and keyboard support on Xbox One.

The Lancehead TE's shape is closer to conventional, non-gaming mice. It still has Razer’s RGB color profiles for lighting effects, but you're getting a mouse that will work well for long periods of time whether you’re gaming on Xbox One or browsing the web on PC. Right-handed gamers would be better served with one of the other options on this list, but for lefties, this is an Xbox One mouse with your name on it.