Score the top titles specifically made for this popular console

The series that made the Xbox stand out in the console wars keeps on trucking with Halo 5: Guardians, a sci-fi first-person shooter with a large campaign and expansive multiplayer modes. Halo 5 is the best Xbox One exclusive first-person shooter on the list and provides fun and engaging gameplay, beautiful visuals and level design, as well as an addicting multiplayer mode.

It’s not over yet — Halo 5: Guardians updates the series to fit the more modern day shooter by including the ability to look down iron sights, command a fire team, slide, sprint and even use weapon load outs with different rankings and abilities. Players will love the motion capture, character animation, and 60FPS as they explore three vast alien worlds and uncover a plot involving the loyalty of the Master Chief, the main protagonist of the series. If the story doesn’t impress you, the online multiplayer will with its large scale, multiple objective-based skirmishes of up to 24 players where the action heats up with lasers, bullets, explosions and vehicles flying everywhere.

The 8 Best Xbox One First-Person Shooters of 2020

Rare Replay is sure to create console envy; a video game that’s a collection of 30 iconic past games from the legendary company known as Rare. Rare is best remembered for its development of unforgettable titles such as Perfect Dark, Banjo-Kazooie and Battletoads — games of the past that now come in one package exclusively under the Xbox One.

Rare Replay costs less than $15 and includes a whopping 700 hours of gameplay guaranteed to keep you and your friends busy and living in nostalgia. Perfect for couch gameplay, Rare Replay comes with multiplayer, split-screen and co-op games such as Conker’s Bad Fur Day, Battletoads Arcade, Viva Pinata, Kameo and more. The games within a game come included with a snapshot challenge mode that captures all your best gameplay moments and various challenges with up to 10,000 points towards your Xbox Gamerscore.

Buy on Walmart Buy on Microsoft Buy on g2a.com

Cuphead is one of the most anticipated and exciting additions to the modern day 2D side-scrolling genre, an experience that can only be found on PC and the Xbox One. The quirky run-and-gun indie game has a rubber hose-style type of animation similar to the 1930s and comes with a “Nintendo Hard” style challenge.

If you have an extra controller, you and a pal can fight side by side as both Cupman and Mugman in the game’s two-player local cooperative campaign. Cuphead is noted for its beautiful animation and music style similar to old cartoons and provides both a difficult and rewarding gameplay experience as players shoot and charge up their finger guns against numerous enemies along with engaging in creative boss fights. Despite its difficulty, players have infinite lives and can jump back in the action with all their equipment and collected experience they gathered on their adventure.

Buy on Amazon Buy on Microsoft

Gears of War 4 is a classic story of man vs. alien, father and son bonding and fun, action-adventure where you’ll take cover behind rocks, run away from muscly mutations and take in the jaw-dropping set pieces. The game’s visually stunning appearance shows off the Xbox One’s texturing abilities with a beautiful weather and physics system that’ll shake the trees and create an ambience of buildup as you prepare for an alien shootout.

Gears of War 4 shines in its campaign mode that can be played with a friend in co-op split-screen and will last about nine hours on normal difficulty as they traverse through a personal story that isn’t so much about a brooding war as it is about the character’s relationships.

Players will fall in love with the likable supporting cast, engage in gun battles with aliens and robots, investigate a new malevolent species, get spooked in dark and gloomy buildings, stop and smell the roses in beautiful environments and partake in an enjoyable and less serious shooter that focuses more on the adventure; this isn’t an intense war.

Online multiplayer comes with a team deathmatch mode where players go head-to-head against each other, and there's a horde mode that can last hours and has players team up to fight off multiple waves of enemies while fortifying an encampment.

The long-awaited fan favorite is back with Killer Instinct: Definitive Edition, the best exclusive Xbox One fighting game on the list. The definitive edition is packed with over-the-top action with 60FPS visuals and 20 out-of-this-world stages starring a wild cast of 26 different characters, including the Battletoads.

If you remember the 1990s, you’ll remember that Killer Instinct was Nintendo’s successful response to the ever-growing hype of fighter-style games such as Street Fighter and Mortal Kombat. Everything has changed, and now the Xbox One exclusive features all your favorite combo style attacks, breakers and characters with an entirely different new fighter game that pays ode to the classic, with impressive modern day graphics, a cinematic story mode, online competitive matches and a new lore to each character presented in the game. The Killer Instinct: Definitive Edition comes packed with goodies, including multiple skins, behind the scenes videos, artwork and an original game soundtrack.

One of the easiest games on the eyes, Super Lucky’s Tale is an exclusive experience reserved on the Xbox One console where kids get to play as an energetic, optimistic and lovable fox named Lucky. The delightful playground platformer sends players on a quest to find a legendary book and thwart a mysterious villain set on reshaping the world.

Time to get that thinking cap on; Super Lucky’s Tale tests players with a number of increasingly difficult puzzles and obstacle courses in serene levels of plains, dungeons and other colorful and lush environments. The suitable-for-all-ages adventure game operates the same way as Mario or Crash Bandicoot; players collect coins and items while interacting with in-game allies and bouncing off of (or tail swiping) enemies such as angry birds and mischievous worms. Super Lucky’s Tale is capable of 4K resolution, too, giving it a life-like appearance with a 3D animation-style that virtually anyone can enjoy watching.

Take a peek at our Xbox One FAQ for more information about this popular console. 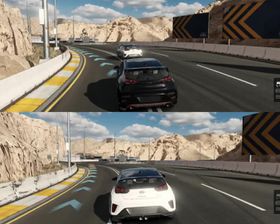 Forza Motorsport 7 is debatably the most realistic racing title you’ll find on a gaming console due to its 4K, ultra-HD resolution at 60FPS. The award-winning series gives you access to over 700 cars such as Lamborghinis, Porches and Ferraris that you can modify and tune up by completing races.

Forza Motorsport 7 is designed with an attention to detail; you’ll notice the small specks of dirt on your car’s hood as you drive through a dynamic weather system of intense rains and puddles that could cause you to hydroplane. Career mode will keep players busy in a romp of seriousness and fun by doing everything from racing off-road trophy trucks, blazing down the Indy 500, screeching through countryside tracks with Formula One cars and even driving tractor trailers. Forza Motorsport 7 also includes a split-screen offline mode, so you can challenge a friend, but if you’re feeling really competitive, you can also play online against other players with a need for speed. 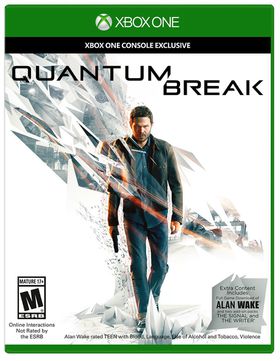 From the same creators who brought us Max Payne and Alan Wake, Quantum Break is a third-person, sci-fi, action-adventure, shooter game that revolves around a man who can manipulate time. The episodic-style game features live-action segments (with decent acting, which is rare for a video game) with multiple outcomes entirely based on the player’s in-game decisions.

With stunning graphics, fun gameplay and a great presentation and story, Quantum Break throws players in a single-player story mode where a time travel experiment has gone wrong, granting them powers to freeze everything and everyone in the world around them. Firefights feel intense and action-packed; while you’ll be shooting, you’ll also be managing your time manipulation powers by creating time shields to block bullets, freeze enemies and then run faster than time to go slap ‘em in the face. Varied gameplay means you won’t just come in guns blazing but rather explore your environment by walking and taking in the atmosphere, solving environmental puzzles that rely on your time powers and engaging in a lot of interaction with characters that flesh out the world around you.