This Xbox One S bundle comes packed with a huge 1TB hard drive, Assassin’s Creed Origins, the critically acclaimed Tom Clancy’s Rainbow Six Siege, a one-month Xbox Game Pass, as well as a 14-day trial of Xbox Live Gold. This is the ideal Xbox One S for anyone that’s a fan of action-adventure stealth games and tactical first-person shooters. It’s the only Xbox One S bundle that includes two different award-winning game types, both of which, provide countless hours of fun gameplay. 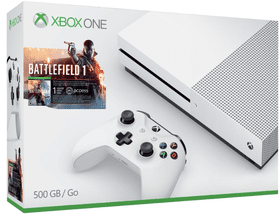 The Xbox One S 500GB Console with Battlefield One is a bundle full of value: The set includes a full download of Battlefield One, plus one month of EA Access, a premium subscription from Electronic Arts that offers a benefit of perks such as early access games and free demos. Battlefield One is a first-person shooter set in World War I and includes highly immersive gameplay and action that pits you against various nations. Battlefield One allows multiple ways to play, too, like flying planes, tanks or horses, all while engaging in multiplayer modes with up to 64 players.

Loaded with goodies, the Xbox One S Starter Bundle is the perfect purchase for first-time buyers as it instantly provides access to more than 100 games like Halo 5: Guardians and LEGO Batman, and includes three months of Xbox Game Pass. Game Pass adds new and popular games each month enticing console owners to extend their subscriptions beyond the trial period. The bundle also includes three free trial months of Xbox Live Gold so you can play with friends all around the world and receive bonus games and extra discounts through the official Microsoft store. Included with this starter bundle is an Xbox One S console with 1TB of available memory. There is also a single wireless controller, a 4K-ready HDMI cable, and AC power adapter. With its bevy of extras and trial options, this bundle is perfect for buyers new to the console experience.

The Xbox One S 500GB - Minecraft Complete Adventure bundle is the perfect bundle on the list for any gamer that wants no limitation on building their own worlds. The bundle comes with three full downloads for the following games: Minecraft, Minecraft Explorers Pack, and Minecraft: Story Mode Season 1 - The Complete Adventure (Episodes 1-8). Minecraft on the Xbox One allows players to be able to play with others who own the game not only on other Xbox One consoles but across Windows 10 operating systems, too, such as PC and mobile, so you can both build anything anytime together. 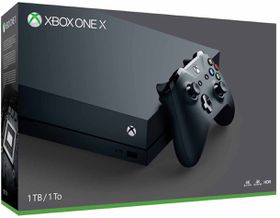 4.6
Buy on Amazon Buy on Walmart Buy on Gamestop.com

Though it isn’t a bundle, the Xbox One X 1TB offers more than your typical Xbox One S console by including a multitude of powerhouse specs unlike any other system on the market today. The Xbox One X 1TB includes everything the Xbox One S has, plus 6 teraflops of graphical processing power, 4K resolution streaming with 60FPS, 326GB/sec memory bandwidth, as well as 40 percent more power than any other console. This is the choice for serious gamers only who want the most out of what the Xbox One has to offer.

Buy on Amazon Buy on Walmart Buy on Microsoft

The Xbox One S 500GB is the most affordable modern day console on the market that sticks to the bare minimum for the maximum amount of fun. Though it doesn’t come with any games like the previous models, it does include a 14-day Xbox Live Gold trial, so you can play online with friends. If you are particular about saving extra money or already have a couple games in mind (that aren’t included in the previous bundles) then this the best Xbox One S for you. 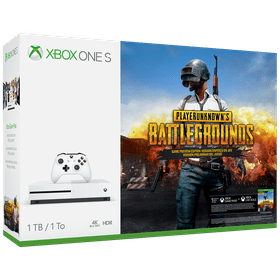 One of the most popular games available, the Xbox One S PlayerUnknown’s Battlegrounds bundle, better known as PUBG, is a fantastic selection. With a full-game download of PUBG available right away, players can immediately immerse themselves in the multiplayer experience. Developed as a “battle royale” online game to play against friends or strangers, players “win” if they are the last one standing. Continuously updated by its developers as a “work in progress,” PUBG has millions of users with dedicated communities across the globe. A one-month trial of Xbox Live Gold will help get players online right away. The included trial to Xbox Game Pass provides more than 100 games each month players can demo and eventually purchase and download. Getting the console setup is easy with the included wireless controller, HDMI cable that’s 4K ready, and AC adapter.

The 7 Best Xbox One Puzzle Games
More from Lifewire