The 5 Best Workout Music Players of 2020

by
Alex Williams
Writer
Alex Williams is an experienced tech writer with an interest in wearable technologies. He focuses on everything from gaming headsets to headphones.
our editorial process
Alex Williams
Audio

The best workout music players are portable, durable, and have a long-lasting battery. Features like waterproofing and sweat resistance are important for devices you'll have attached to your clothes or gear, and physical buttons may be preferable since a touchscreen may not be as responsive to workouts. Our top pick, the SanDisk Clip Sport Plus (view on Amazon), checks all these boxes. It has physical buttons, is water resistant, and is small and compact enough to attach to just about anything.

If you're looking at more general music players, you should take a look at our list of the best MP3 players. Otherwise, see below for the best workout music players you can get. 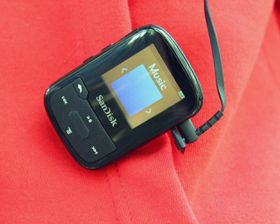 The SanDisk Clip Sport Plus has everything you want in a workout music player. It's an affordable little device with a small LCD screen to show you the music you're playing along with some album covers, it can optionally come with Bluetooth so you can use it with wireless headphones, and it's easy to clip onto clothes or gear.

The 16GB player can store up to 4000 songs and file support includes Audible meaning you're not limited to music. Battery life can last up to 20 hours on a single charge. The player is waterproof and comes with backup earphones and buds. In terms of value, it's hard to find a better deal.

4.3
Buy on Amazon Buy on Best Buy Buy on Apple

The iPod touch is something of an oddball since it’s really just a baby iPhone without the added benefits of mobile data and trailblazing horsepower. When you’re working out, however, that alone makes it an excellent choice that won’t break the bank. Starting at 32GB of internal storage, you can put more than enough music on it for even the longest workout routines, and if you detest compression, there’s plenty of room for your FLAC files too.

While the iPod touch isn’t the most portable music player, it’s easily the most versatile. Not only can you load it up with music in almost any format you like, but you also have an entire catalog of iOS apps to draw from. So if you’re a Spotify user, you can stream or take your existing playlists offline at the gym before setting off into the streets for a long outdoor run. Moreover, you’re far more likely to find workout accessories for the iPod touch than for any other music player out there. As Apple hasn’t changed the dimensions in the past seven years, there's already a huge catalog of bespoke cases and armbands in full swing.

Even if you’re already an iPhone user — or, perhaps, especially if you are — the iPod touch can be a great option for your workouts, since it provides the same user interface you’re already familiar with and is compatible with almost all of the same apps you may have already paid for. Yet it’s more portable and less expensive than the latest iPhones, and it will free you from distractions, letting you focus on your workout rather than a steady stream of irksome notifications.

3.8
Buy on Amazon Buy on Walmart

With 10 hours of straight play time, 8GB of memory (2,000 songs-worth), and an IPX8 waterproof rating (the highest you can get), this ergonomic MP3 player is an ideal fit for all types of swimmers. The device supports a variety of files, including MP3s, WMAs, FLACs, and more. You can also pair the player with your smartphone—be it an iPhone, Samsung, Android, etc.—to connect wirelessly to your Spotify and Pandora accounts.

At first glance, the Sony Walkman NW-WS623 looks like a pair of wireless headphones. But with options for either 4GB or 16GB of internal storage, the NW-WS623 is a great standalone music player for runners who don’t want to worry about bringing along a separate MP3 player.

The NW-WS623 is waterproof and sweatproof, making it ideal for exercise. It can even withstand being submerged in salt water, so you can take it swimming or surfing in the ocean. With an ergonomic in-ear design, the NW-WS623 should stay securely on your head, even while running. The internal storage can hold hours of music, podcasts and audiobooks that you can play for up to 12 hours per charge. The device also has a quick-charge option where you can get up to 60 minutes of charge in three minutes.

Since you can upload audio files directly to the NW-WS623, you can use it without connecting your phone. That may be ideal for some runners, but if you prefer to take your phone with you during a workout, you can pair it to these headphones and stream music or even answer phone calls via Bluetooth. 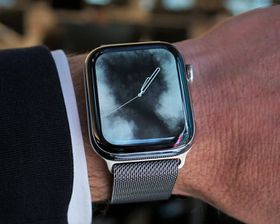 4.5
Buy on Amazon Buy on Walmart Buy on skimresources.com

Seeing as Apple pioneered the mainstream portable music player in the form of the iPod, it should come as no surprise that among the many other features the Apple Watch offers, it's also a great wearable music player.

Thanks to the tight integration with your iPhone's Music app, you can easily load up your favorite songs before you head to the gym or go out for a run, and then pair up a set of Bluetooth headphones to listen to your music on the go, without needing to lug around your phone. And if you’re an Apple Music subscriber, the cellular version of the Apple Watch Series 5 will give you wireless access to your entire library on the go, along with Apple’s own collection of over 40 million songs, right on your wrist.

Of course, the Apple Watch is so much more than just a music player — it’s also a great workout device, so you’re getting the best of two worlds here. Built-in fitness apps track your workouts, including things like distance run, laps swum, and calories burned. In addition, a GPS records the route you take while a huge collection of specialized third-party fitness apps are available from Apple’s sprawling App Store.

The best workout music player to get is the SanDisk Clip Sort Plus. It's a compact little MP3 player with physical controls, water resistance, and enough space to store 4,000 songs. It can clip onto your clothes or gear with ease and even supports Bluetooth. It's hard to find a better deal for the price. Also worthy of mention is the Apple iPod Touch. It's more expensive, but it gets you a nice big 4-inch display, app support, fast performance, and the ability to store tons of music.

What to Look for in a Workout Music Player

Type of Exercise - Are you a runner? Or maybe a swimmer? Or do you change up the type of exercise you do depending on the weather or the mood you’re in? Different players cater to different types of workouts. Those who work out in the outdoors or swim regularly may want to look at waterproof players. And runners will want something as light and compact as possible so it won’t weigh them down.

Connection - The whole point of buying a separate workout music player is that you probably don’t want to carry your phone with you. You’ll want to make sure, then, that whichever one you pick attaches in a comfortable and secure way. Some use a watch, while others clip to your clothes. Or if you do prefer to have your phone with you, then an armband holster might be a good purchase.

Size - When it comes to workout music players, size matters. You want something that is small enough to be discreet and to tuck in a pocket, but large enough to where it isn’t cumbersome to use buttons or skip a song (or alternatively, has a headphone cord that allows you to control playback). Players often increase in price as they decrease in size, so you may need to figure out what kind of balance you want to strike between the two.