The 6 Best Wireless Keyboards of 2022

Cut the cord once and for all

A wireless keyboard is useful for connecting to tablets, phones, and even desktops. Cutting the cord can help you take your productivity on the go, and also limit the profusion of cords cluttering your desk for your home PC setup. If you're in the market for the best wireless keyboard, you'll want to pick one with solid durability, a long battery life, and extra features like compatibility with your smart TV. We've researched a number of the most popular wireless keyboards available, evaluating them to see which best suit your needs for portability, gaming, productivity, media centers, and more.

You should also check out our list of best computer keyboards and best gaming keyboards if you have more specific needs. 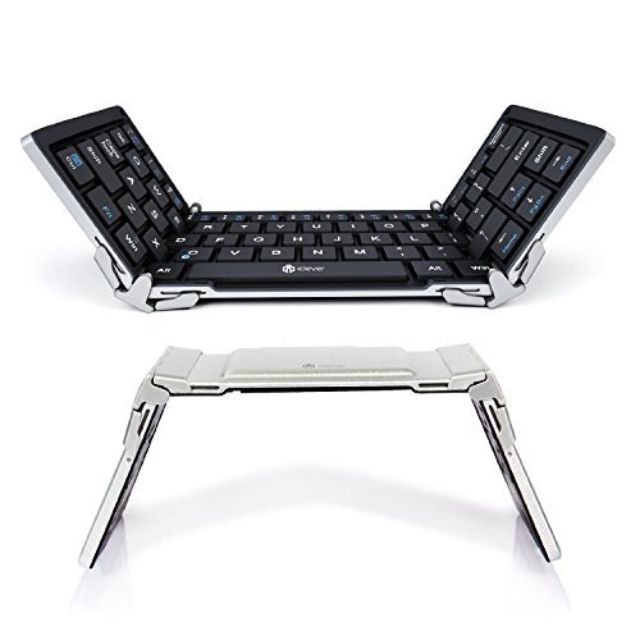 When you're traveling light, or want a keyboard just for replying to a few long e-mails on your phone or tablet, most wireless keyboards are too large and heavy to justify carrying. Not so for this iClever model, which folds in two places to form a compact, lightweight package.

Compact (5.7 x 3.5 x 0.5 inches) when folded down, it weighs just 6.3 ounces, yet expands out to close to the size of a standard keyboard while in use. The iClever Foldable is compatible with most Bluetooth devices, including the majority of smartphones, tablets, and computers.

Battery life is impressive, at up to ninety hours of continuous use, and the keyboard fully charges in two hours via the included micro-USB cable.

There's a useful pouch to store and protect everything in transit, and it stays stable on any hard surface, even while typing quickly. Well-priced and reliable, it's the ideal wireless travel keyboard.

Before you start using this model, make sure you familiarize yourself with how to install a wireless keyboard.

"If you're a frequent traveler or want a keyboard to use with your phone or tablet, the iClever Foldable is compact enough to fit in your bag and give you an extra bit of productivity while on the go." — Ajay Kumar, Tech Editor 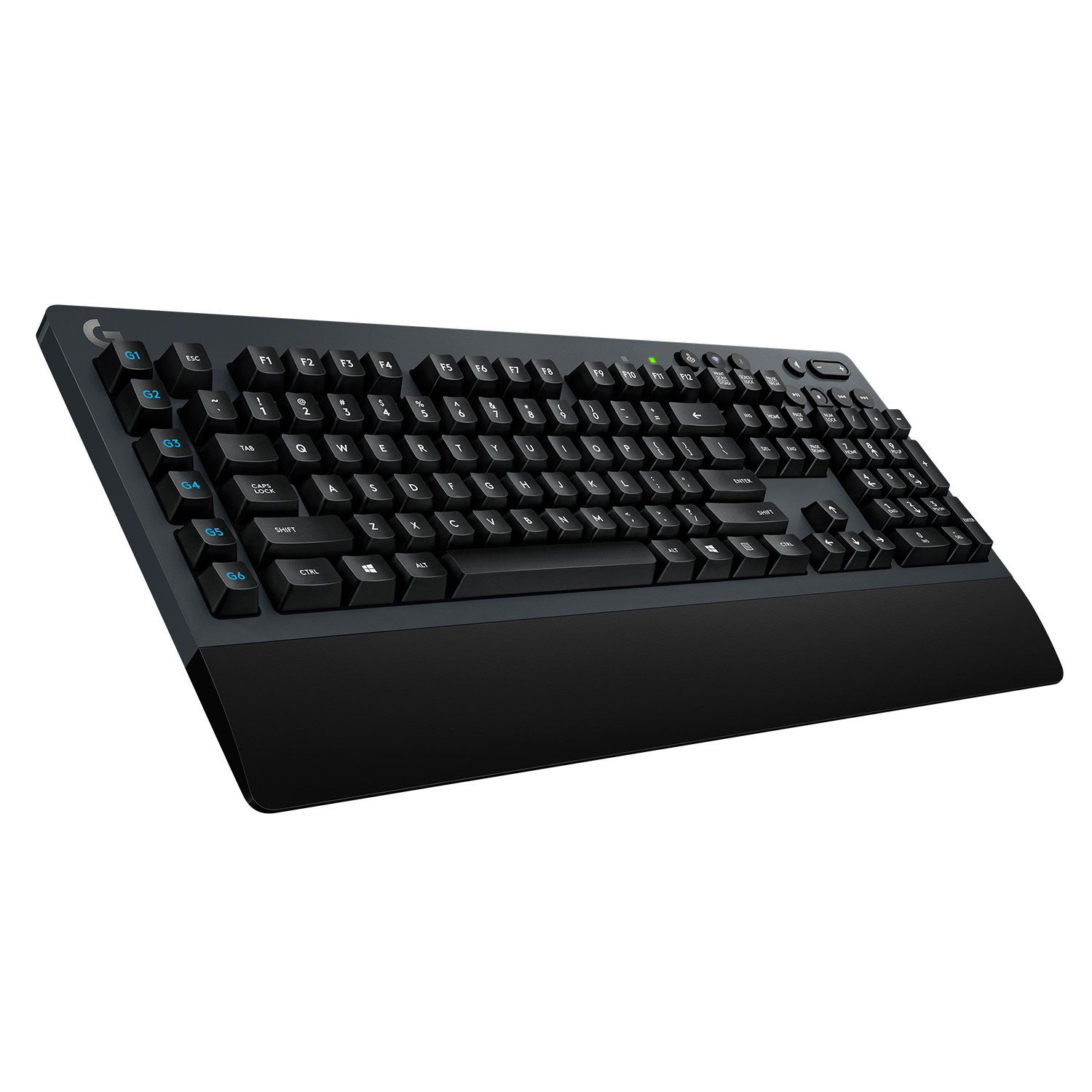 Even as wireless models have started to dominate much of the keyboard market, gamers have steadfastly stuck with the wired versions. Delays and disconnections can be the difference between success and failure in fast-action online games and the reliability of a cable is hard to beat.

Designed specifically with gamers in mind, the Logitech G613 does a good job of changing all that. The 1ms response time with the bundled Lightspeed USB dongle is about as good as it gets with wireless keyboards, and Bluetooth is also included for connecting to mobile and other devices.

There's a number pad on the right-hand side, while six standalone buttons can be programmed with macros of your choice. Mechanical key switches ensure precise, consistent keystrokes, and a pair of AA batteries lasts up to 18 months.

Weighing just over three pounds, this is a solid, sturdy keyboard that can handle even the most intense gaming sessions with ease.

The 9 Best Wireless Gaming Keyboards of 2022

"The Logitech G613 is a rarity. It's one of the few high-quality wireless keyboards for gamers and it also works great for media centers." — Alice Newcome-Beill, Associate Commerce Editor

Best With a Touchpad

If you're looking for a keyboard that's just as useful for extended typing sessions as it is as controlling your home theater or smart TV, look no further than Logitech's Wireless Touch K400 Plus.

This quiet, slimline keyboard works with Windows, MacOS, ChromeOS, Linux, and Android-powered devices with a USB-A port, including smart televisions. Just plug in the small USB receiver, and you're good to go from up to 33 feet away.

There's a three-inch touchpad for easy cursor control, with both left and right mouse buttons, and two-finger scrolling. The keyboard gets up to 18 months of battery life (based on two hours of typing per day) from the two AA batteries.

Quick-access volume control buttons are included above the touchpad, with other standard media management options on the top row of keys.

Best on a Budget 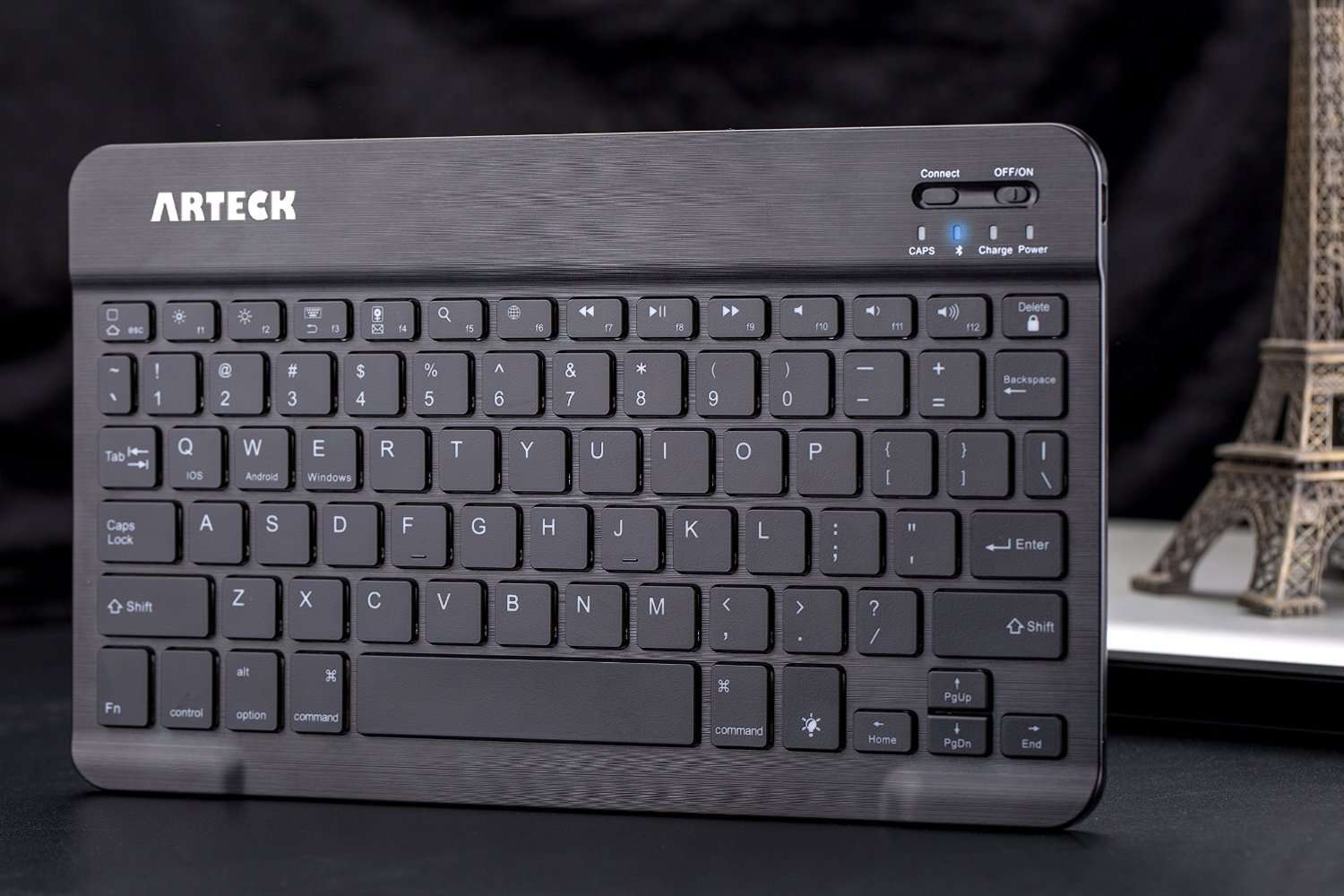 The Arteck HB030B is a good, reliable wireless keyboard that won't break the bank. This low-cost model's biggest claim to fame is its multiple backlight colors and intensities, but even if you never turn them on, there's plenty to like about this keyboard.

Bluetooth connectivity ensures broad support for computers, phones, and tablets, and you'll get up to six months of battery life with that fancy backlighting turned off. When it does eventually run out of juice, charging is handled via a standard micro-USB port.

The HB030B is compact and lightweight, measuring 9.7 x 0.2 x 5.9 inches, and weighing under six ounces. Media control keys are included in the top row of buttons.

If you're sick of typing on a touchscreen and want a small, inexpensive wireless keyboard to drop in your bag or stick in a drawer, this is the one to go for.

Do you miss the reliability and feel of old-school mechanical keyboards? While they're not the most office-friendly option due to the amount of noise they make, mechanical keyboards have remained popular with programmers and others who do a lot of typing due to their better tactile response and longer lifespan.

There aren't many good wireless versions around, but the Filco Majestouch Convertible 2 is one of the few that ticks all the right boxes. At 2.7 pounds, this sturdy keyboard is designed to take a beating. You'll get months of use out of a pair of AA batteries.

The Cherry MX key switches are some of the best in the business, and this keyboard is available with blue, brown, or black switches—each has different physical characteristics.

The keyboard can be connected via the included USB cable or paired via Bluetooth with up to four devices, but there's no backlighting, media keys, or other fancy features. The focus is purely on the typing experience, and at that, the Convertible 2 excels.

The 7 Best Mechanical Keyboards of 2022 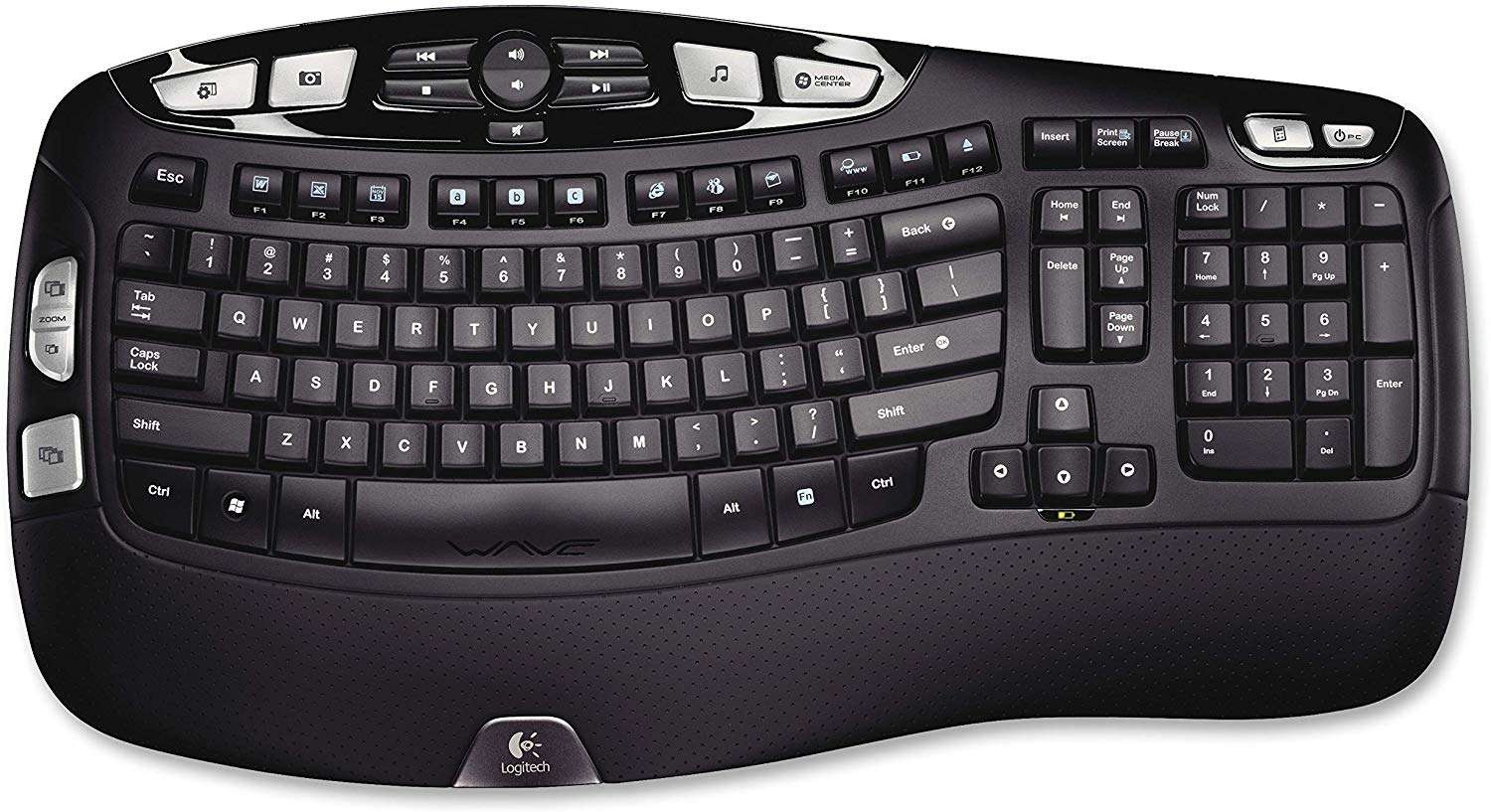 If you've ever had problems with wrist pain due to spending too much time typing, you'll already likely know that standard flat keyboard designs aren't great. Wired ergonomic keyboards have been around for several decades, but wireless ones like the Logitech K350 are a more recent innovation.

The keyboard's wave-like design and integrated wrist rest force your hands into a more natural position, helping reduce strain on those tiny muscles. Fold-out legs on the back also let you adjust the height and angle.

Using Logitech's standard Unifying Receiver that also works with the company's other input devices, the K350 is designed for use with Windows-based computers.

The pair of AAA batteries lasts up to three years in a standard office environment, but with a full set of media keys at the top, plus zoom and other specific buttons elsewhere on the keyboard, it's equally useful at home.

If you're in need of a wireless keyboard to slip into your bag and take with you on the go, the iClever Foldable is a great option. It snaps closed into a compact aluminum clamshell case for portability, but it still features everything a full-size keyboard does. Even better, it's fully rechargeable and is compatible with most Bluetooth devices, including smartphones, tablets, and computers. For gamers, the Logitech G613 is a great option. It's a rare wireless mechanical keyboard, complete with macros keys for media controls. It works well both for gaming rigs and home media centers.

Our experts haven't had a chance to try out any of our top picks for wireless keyboards just yet, but they'll be testing for things like battery life and connectivity by using these keyboards with a variety of devices. Beyond specifications, our experts will also be considering the layout and feel of each keyboard to determine which one is best for you.

Ajay Kumar is Tech Editor at Lifewire. With seven years of experience in the industry, he's reviewed hundred of products, including laptops, tablets, smartphones, keyboards, mice, and other accessories. He personally owns the iClever Foldable and uses it to work on his fantasy manuscript while he's on the go.

Alice Newcome-Beill is Associate Commerce Editor at Lifewire. Previously published on PC Mag and PC Gamer, Alice is a hardcore gamer who's very familiar with gaming hardware and accessories. She's used just about every Razer and Logitech keyboard there is and likes the Logitech G613 for its compatibility with her media center.

What to Look for When Buying Wireless Keyboards

Durability/Portability - Wireless keyboards can have a number of different form factors and switch types. The cheaper, lighter ones tend to be made out of plastic and use rubber dome switches. These are fairly quiet, but they're also not very durable or precise. Mechanical keyboard have mechanical switches (usually Cherry, but there are other types), giving them a more audible sound and requiring a greater actuation force. Build material can include lightweight aluminum or heavier CNC machined aluminum.

Battery Life - Battery life for wireless keyboard is usually through AA or AAA batteries. The battery-powered keyboards can last anywhere from several months to several years depending on their efficiency. Wireless Bluetooth keyboards are usually rechargeable. They typically can last a work day or a week, but tend to consume more power than keyboards that use a wireless receiver.

Extra Features - Wireless keyboards can vary in features. Higher-end types will have backlighting and macros keys, making them useful for media centers. Certain Logitech models come with a universal receiver, making them compatible with numerous devices and operating systems as long as the receiver is plugged in.