The 7 Best Wireless Gaming Keyboards of 2020

Ditch the cable for your next gaming session 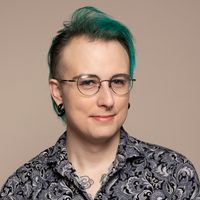 The Rundown
Best Overall:
Logitech Logitech G915 TKL Wireless at Amazon
"One of our top contenders for wireless gaming keyboards, despite its somewhat exorbitant price tag."
Runner-Up, Best Overall:
Logitech G613 at Amazon
"The best mix of gaming performance, battery life, and usefulness from a wireless keyboard."
Best Budget:
Logitech K350 at Amazon
"Covers all the basics, with a wrist rest, height-adjustable legs, and a range of shortcut and media keys."
Best for Small Spaces:
Anne Pro 2 Gaming Keyboard at Amazon
"Eliminates and combines many of the less-important keys such as functions and arrows."
Best for Features:
G-Cord Wireless Keyboard at Amazon
"An appealing, reasonably-priced option with more features than you'd expect for the money."
Best Multi-Device:
DIERYA Mechanical Gaming Keyboard at Amazon
"This 60 percent mechnical keyboard can work with just about any WIndows, Mac, and Android device."
Best Splurge:
Razer Razer BlackWidow V3 Pro Wireless at Amazon
Best Keyboard and Mouse Combo:
Razer Turret Keyboard and Mouse at Amazon
"Designed from the ground up to provide a desktop gaming experience in your living room."

The best wireless gaming keyboards should have solid connectivity, a high-quality build, and extra features for gamers like RGB, keymapping, and customization options. Some keyboards are programmable, allowing multiple kinds of lighting effects and extra functionality. Wireless keyboards with Bluetooth can also often work with devices like tablets and smartphones. Our top pick with all these features is the reputable Logitech G613 at Amazon. It has stable LIGHTSPEED wireless technology allowing for fast keystrokes, has 18 months of battery life, and its receiver is compatible with Windows and macOS.

If you're not much of a gamer you should also take a look at our list of the best computer keyboards to cover more general and productive uses.

The G915 TKL from Logitech represents a significant departure from traditional gaming keyboard designs. This low-profile keyboard is essentially just a tenkeyless version of the Logitech G915, featuring the same slim keycaps, aluminum body, and wireless connectivity of its larger sibling.

While most low-profile keyboards use membrane switches, the G915 uses proprietary low-profile Romer-G switches developed by Logitech and are available in either Linear, Clicky, or Tactile varieties. The mechanical switches offer a true gaming keyboard feel without the added bulk.

The G915 also features dedicated media playback buttons and a super-smooth volume wheel. The onboard battery can reportedly last for up to 40 hours with full lighting and is topped off with a micro-USB connection.

The slim, brushed aluminum body lends a premium feel to this keyboard, making it one of our top contenders for wireless gaming keyboards, despite its somewhat exorbitant price tag. 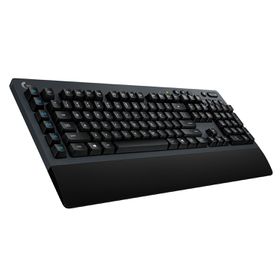 If you're after the best mix of gaming performance, battery life, and usefulness from a wireless keyboard, look no further than the Logitech G613. Using the company's LIGHTSPEED wireless technology to improve the stability of the connection and the speed at which keystrokes are registered, it's hard to tell the difference between the G613 and an equivalent wired model in daily use.

The keyboard doesn't include a backlight, which both keeps it looking more understated than much of the competition, and allows it to get up to 18 months from a single set of AA batteries. The downside, of course, is that you won't be able to use it as easily in a dimly-lit room.

Despite being a mechanical keyboard, the 3mm (0.12") of travel ensures keystrokes remain relatively quiet even in the midst of a heavy gaming session. There are plenty of programmable macro and media buttons available, and the 2.4Ghz receiver is compatible with both Windows and macOS. Bluetooth support is also included, letting you connect to Android and iOS devices as well.

Looking for an inexpensive wireless keyboard from a well-known manufacturer that works well for both gaming and general computing tasks? Check out Logitech's K350.

This Windows-compatible keyboard covers all the basics, with a wrist rest, height-adjustable legs, and a range of shortcut and media keys. It isn't officially macOS-compatible, but in reality the only part unlikely to work is a few of the shortcut buttons. The "wave" design ensures a comfortable typing experience even during extended gaming sessions.

More functional than stylish, it's not the most attractive of computer accessories, but it does the job just fine. The pair of AA batteries provides up to a remarkable three years of use.

The keyboard connects via the included 2.4Ghz Unifying receiver that plugs into a USB port. If you have a Logitech mouse or other keyboard, it'll likely be able to connect to the same receiver. There are no Bluetooth or wired connection options, however.

Billed as a "60 percent keyboard", the Anne Pro 2 measures a svelte 11.2" x 3.8", and is just 1.6" high. It achieves these streamlined dimensions by eliminating and combining many of the less-important keys such as functions and arrows, leaving just 61 keys remaining.

The physical buttons are the only place this keyboard skimps, however, with plenty of extra gaming-specific features. Able to be used in both wired USB-C and wireless Bluetooth 4.0 modes, the Anne Pro 2 has adjustable per-key RGB backlighting, up to eight hours of battery life, and lets you program up to 16 keys with your desired macros.

A multi-platform app makes configuring things like backlight colors and macros straightforward, and in a useful touch, returns arrow key functionality when the keys on the bottom right are tapped rather than held.

The 7 Best Mechanical Keyboards of 2020

Equally useful for gaming or extended typing sessions, G-Cord's wireless mechanical keyboard is an appealing, reasonably-priced option with more features than you'd expect for the money.

The RGB backlighting has various configurable effects and can be turned off if not required, which also helps extend battery life beyond the stated one-week duration. Able to be connected via a USB cable as well as the included wireless receiver, this durable macOS and Windows-compatible keyboard is rated for up to 50 million key presses.

The futuristic font used on the keycaps helps boost the G-Cord's gaming credentials, while still being easy to read at a glance. The 1ms response rate ensures fast and reliable keystrokes, while the aluminum frame and 2.5-pound weight mean this is a solid and sturdy piece of equipment that won't flex or accidentally move around at the worst-possible moment.

The DIERYA Mechanical Gaming keyboard is an affordable 60 percent board, meaning that it doesn't have a number pad, function row, or arrow keys. The smaller profile keeps things minimalist and takes up less desk space. The keyboard is Bluetooth, allowing it to work with three wireless devices simultaneously. It functions with Windows and macOS desktops and laptops, as well as iPads, iPhones, and Android phones and tablets. There are a total of 8 RGB lighting effects and there's a 1,900mAh battery under the hood, which is larger than the ones your typically get on a wireless gaming keyboard.

The Razer Blackwidow V3 Pro is a wireless reimagining of the Razer's tried and true Blackwidow form factor. On the surface, not much has changed, the PBT keycaps, dedicated media controls, and magnetic wrist rest are still here. However, this iteration comes equipped with wireless connectivity options for Bluetooth or 2.4 GHz wireless

The V3 Pro still features options for both clicky, green switches, or linear yellow switches, and is mostly unchanged from its wireless counterparts. Save for the lack of USB or 3.5mm audio passthrough.

The internal battery of the V3 Pro can reportedly last up to 192 hours on a single charge, provided you haven't enabled any RGB backlighting. If you need to top off your keyboard or opt to keep it tethered to your desktop, the V3 Pro features a USB-C connection for quick charging.

The V3 Pro is ultimately a wireless version of a solid keyboard design but unfortunately comes at a relatively high price point, costing roughly $100 more than it's wired counterpart.

The cult of Razer strikes again with the solid Razer turret, designed from the ground up to provide a desktop gaming experience in your living room, this wireless keyboard and mouse combo can pair with your PC or Xbox One. The Keyboard itself comes equipped with Razer's clicky green switches, an integrated wrist rest, and a magnetic retractable mousepad built into the body of the keyboard. The magnetic mousepad works exclusively with the wireless DeathAdder mouse that comes included as part of the package and is a handy addition that helps keep the mouse from immediately sliding off the pad.

Both the mouse and keyboard have full Razer Chroma RGB lighting, which makes this one of the best looking options on our list, and can last for up to 40 hours on a single charge.

While having mouse and keyboard controls for your Xbox One is definitely attractive, currently only about a couple dozen titles are supported, making this primarily a PC peripheral. This is a solid wireless keyboard but the limited compatibility with Xbox titles is only compounded by the exaggerated cost of this particular keyboard.

The best wireless gaming keyboard to get is the Logitech G613 (view at Amazon). It offers the best mix of performance and battery life, with a fast and stable wireless connection, quick and quiet keystrokes, and a 2.4GHz receiver that works with both WIndows and macOS devices. As a close second, we like the Corsair K63 Wireless (view at Amazon). It also comes from a reputable gaming brand, features blue LED backlighting, software customization, and up to 75 hours of battery life.