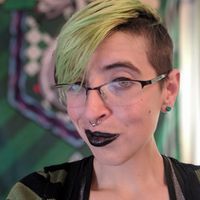 Jessica Kormos
Lifewire Technology Review Board Member
Jessica Kormos is a writer and editor with 15 years' experience writing articles, copy, and UX content for Tecca.com, Rosenfeld Media, and many others.
our review board
Jessica Kormos
Game Play

Face it, working out at home is boring and sometimes that feels like a valid enough excuse to not even bother. Maybe, just maybe, VR can help. We found a few games that can help you exercise right at home and keep you motivated.

When you think of a workout in VR, your mind probably doesn't go to sports. That's what Sparc aims to change. This VSport puts you in a fast-paced game that has you dodging, blocking, and throwing balls at your opponent. This game is available on PlayStation VR, Oculus Rift, and HTC Vive for $19.99.

The aim of the game is to hit your opponent with balls of energy but you'll need to ricochet off of walls and use angles to your advantage if you want to get past their shield. Once you get the hang of things you'll be blocking projectiles, dodging incoming attacks and throwing your own ball. The competitive feel will definitely give you a workout for your upper body and cardio.

Have you ever wanted to become Katniss Everdeen, Hawkeye, or Robin Hood? With Holopoint that's exactly what you'll be doing.

This game has you arching at a variety of targets in waves. Things start out easy with just a few static balls that float around you, but before you know it you'll have to dodge incoming projectiles and take down enemies with your arsenal. Holopoint is available for Oculus Rift and HTC Vive for $14.99 on Steam.

Plenty of people get out their aggression while working out, and if you fall into that category then you can punch your heart out with Knockout League. This app takes its workout seriously, and even includes a calorie counter to help you see as you burn!

This arcade style game puts you in a 1v1 boxing match against a variety of opponents. It isn't particularly realistic, but throwing punches and dodging jabs will get your heart pumping in no time flat. You can pick up Knockout League for PlayStation VR, Oculus Rift, or HTC Vive for $29.99.

Superhot is a unique shooter when it comes to games that will get you working up a sweat. You'll control time in order to plan out your attack, dealing with a variety of enemies and situations.

It's a fast-paced game, to begin with, and with trials like speed running levels it's easy to work up a sweat. There's plenty of content here between the main game, and trials to keep your heart thumping! It's available on PlayStation VR, HTC Vive, Oculus Rift and Windows Mixed Reality for $24.99.

When it comes to awesome workout games that make you forget that you're actually working out, Echo Arena is one of the best. This multiplayer game puts you in Zero G where you and the other players on your team are trying to score against the enemy team.

Echo Arena is the multiplayer version of Lone Arena, and takes the Gear VR game to a new level with an upgrade to Oculus Rift. This game is absolutely free to play, and includes support for 5v5 team matches and 15 person parties.

Audioshield is a fast paced game that is literally based off of the music that is playing. Each note will come rushing at you, and you'll have to punch your way through them. The results are fantastic.
AudioShield has their own tracks, or you can load up your favorite music. While you can go easy on the punches to get each note, the game will register the force you use. This means if you really start to swing, you'll score higher. It's available for HTC Vive and Oculus Rift through Steam for $19.99.

Raw Data takes you to a future gone very, very awry. In the future, Eden Corp wanted to bring all of Mankind together. Instead, they've got a building filled with murderous robots, and you'll need to mow them down in order to survive.

There are four different characters to choose from, each with their own arsenal and play style. You can go at it by yourself, team up with a friend in co-op, or face down other players in head to head mode. This is a fast-paced FPS game that will have you working up a sweat as you yell at the screen and it's available for PlayStation VR, Oculus Rift and HTC Vive for $39.99.

ROM: Extraction is an arcade shooter built with VR in mind. You'll use a variety of high tech weapons, and control over time to murder your way through waves of robots that want you dead.

You'll have to dodge enemy attacks, and find the best way to take down waves and waves of robot enemies. With the use of time bending powers you'll also be able to trigger massive explosions to help you out. It's available for PlayStation VR, Oculus Rift, HTC Vive for $19.99.

When you think of Pong it probably doesn't look like something you'd play in VR. That's where Holoball comes in. You enter the game, batting balls at a panel and attempting to score against it.

This game looks and feels like something between Tron and the original pong. You wield a paddle as your only weapon, but depending on the difficulty, you'll definitely be working up a sweat. This game is available for PlayStation VR, HTC Vive and Oculus Rift for $14.99.