The 7 Best VR Games for iPhone and Android in 2020

by
Alex Williams
Writer
Alex Williams is an experienced tech writer with an interest in wearable technologies. He focuses on everything from gaming headsets to headphones.
our editorial process
Alex Williams
Games & Consoles

The Rundown
Best Overall:
Nival InCell VR at Apple
"A straightforward game with simple controls and an interesting premise."
Best First-Person Shooter:
FIBRUM Zombie Shooter VR at Apple
"Players enter a post apocalyptic world full of zombies in dark environments that will howl at you as you unleash an arsenal upon them."
Best for Horror:
Otherworld Interactive Sisters at Apple
"Sisters is a story-driven mystery game with a haunting atmosphere that has you in the middle of an old creaky house during a storm."
Best for Racing:
VRMob.co VR XRacer at Apple
"VR XRacer places players in a hovercraft where they zip past impressive 3D geometrical pillars and obstacles at high speeds."
Best for Tower Defense:
Majesco Entertainment Romans From Mars 360 at Apple
"Romans From Mars 360 takes the cake for the best tower defense VR game (and consider yourself warned: It is very addicting)."
Best for Kids:
Lukasz Pawlowicz Roller Coaster VR Theme Park at Apple
"The Roller Coaster VR Theme Park app brings the adrenaline rush of these classic rides to your own living room."
Best Sci-Fi:
BlackAnt Games VR Galaxy Wars at google.com
"Take out bad guys and dodge enemy fire on a backdrop of stars and faraway galaxies."

Virtual reality (VR) games are still something of a niche market, but they’ve slowly made their way into the mainstream and into smartphone app stores. While most VR games out there are still designed for specialized VR headsets, the smartphone version of VR technology utilizes a phone screen and headset-style phone holder to achieve a similar immersive effect (a great example of this is Google Cardboard). VR games are designed to be played in one of these devices and respond to the movement of your head as you “look around” in the game space.

If you want to try out basic VR technology without investing in an expensive headset and controller, there is a growing number of compatible games in the Google Play and Apple App Store that can be played using a much cheaper smartphone headset. Whether you have an iPhone or an Android, we’ve done the research to find the best VR games for your phone. 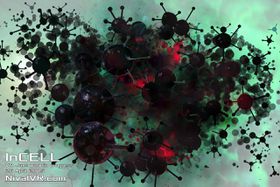 If you’re a newcomer to VR games, InCell by Nival is a great place to start. It’s a straightforward game with simple controls and an interesting premise. In the story, you are shrunk down to a microscopic size and embark on an adventure inside the cells of the human body. Part racing game and part exploratory action game, InCell replicates the real structure of human cells to create beautiful and immersive microscopic VR environments. This game stands out for its unique concept and educational features, and it’s suitable for the whole family (though the gameplay itself may be a little difficult for young kids).

InCell is free and can be played with or without a VR headset. It’s compatible with several different kinds of Google Cardboard-style headsets like Fibrum, View Master, Homido, Durovis, or Archos. 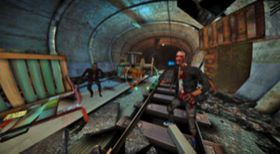 Games just aren’t complete without a zombie genre and our favorite pick is the Zombie Shooter VR. Players enter a post apocalyptic world full of zombies in dark environments that will howl at you as you unleash an arsenal upon them using various weapons.

Zombie Shooter VR uses look-to-shoot style controls that make the game both user-friendly and immersive. Players start the game by picking a weapon of their choice and then are thrown into dimly lit tunnels where an army of undead await them. The game offers a full 360 degrees of exploration and is compatible with most virtual reality glasses out on the market. Gameplay does take some concentration and a steady focus to defeat zombies, so be prepared and vigilant!

"If you love zombies, you won't go wrong with Zombie Shooter VR. The controls are simply, the gameplay is fast-paced, and it's easy to get a quick 15-20 minute session while you're on a break." — Ajay Kumar, Tech Editor 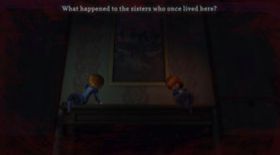 Horror and VR go together wonderfully, giving players a whole new realm of terror, much like you’d find in Sisters. Sisters is a story-driven mystery type game with a delightfully haunting atmosphere that has you in the middle of an old creaky house during a storm.

Sisters gives players a full 360-degree view of 64-bit graphic visuals with appropriately chilling binaural and directional audio. The simple look-based controls are easy to pick up and use head tracking that makes you feel like you’re actually there. The game isn't fair either, as it’s programmed to know and respond to what you’re looking at, so there’s always an opportunity of fright and potential jump scares. Are you brave enough to tackle the imaginary?

VR XRacer is the quintessential space racer that’s both easy to learn and fun to play. The game places players in a hovercraft where they zip past impressive 3D geometrical pillars and obstacles at high speeds.

VR XRacer is a game that tests how long you can go with its heart-pounding top speed tower dodging gameplay style. Players control their spacecraft by simply tilting their head left or right in order to move side by side, so they can weave through obstacles. The game gets more difficult as you rack up your high score for distance traveled and features a multicolor theme selection for your racer. 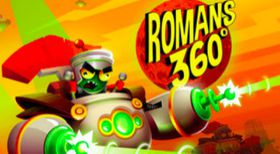 As strange as the name sounds, Romans From Mars 360 takes the cake for the best tower defense VR game (and consider yourself warned: It is very addicting). Gameplay has you facing off countless waves of invading martians set on taking over the world, and its up to you to fend them off.

Romans From Mars 360 gives players a wide depth of field as they sit stationed in their castle rook, aiming their crossbow and firing at an invading alien army that gets stronger and stronger with each wave. The game boasts an immersive experience of a fun and colorful world with a full 360-degree field of view. Players collect gold as they complete each level, using it to upgrade their crossbow ballista and improving rates of fire, critical hit chance and hit radius. 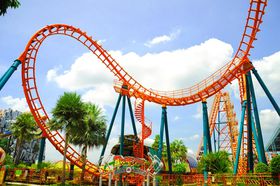 The Roller Coaster VR Theme Park app brings the adrenaline rush of these classic rides to your own living room. Roller coaster simulators are a great way to take advantage of the immersive effects of VR and a fun way to introduce kids to this technology — when you’re surrounded by 360-degree views of these animated rides, you’ll definitely feel your stomach drop as you hit that first big downhill. With 18 different rides to choose from, ranging from relaxing carousels to a spooky “horror house” ride, there’s something for kids of all ages to enjoy.

The Roller Coaster VR Theme Park app works with all kinds of smartphone-compatible VR headsets. Unfortunately, it is only available on iOS at this time. And while it is free to download and ride a few of the roller coasters, many of the rides must be unlocked with in-app purchases. 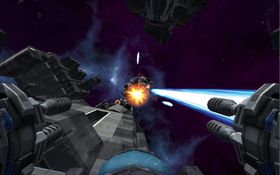 VR Galaxy Wars from BlackAnt Games puts you in the middle of an intergalactic power struggle, weaving through a melee of battling spaceships. Take out bad guys and dodge enemy fire on a backdrop of stars and faraway galaxies. With 360-degree visuals and immersive sound design, this game really strives to make the most of the smartphone VR format. And if you don’t have your headset handy, you can play it as a regular game using the gyroscope in your device. As with many mobile apps, VR Galaxy Wars is a bit limited in terms of its gameplay and only has four missions to complete. But if you’re a sci-fi fan with an Android device, this is definitely a VR game worth checking out.

Our favorite smartphone VR game is Nival’s InCell VR app, which immerses players in a beautiful microscopic world that mimics real-life biological structures. For kids, we’d recommend Roller Coaster VR Theme Park, a ride simulator that plays to many of the most fun parts of virtual reality.

While our expert reviewers and testers haven't yet tested VR games for iPhone and Android phones, when they do, they'll take into account a mix of objective and subjective factors. First, we use a standard headset like the Google Cardboard, Samsung Gear VR, or other compatible device. Then we play the game itself, looking at the compatibility with our respective phone, the quality of graphics, and how well the game incorporates VR elements and movements into the gameplay loop.

We balance the subjective elements of personal likes and dislikes, with an overall view of the genre as a whole and the value proposition offered by the game in terms of length and payoff. We also compare each game to a similar rival to help us make a final evaluation. Lifewire purchases each game; we do not accept review codes.

A former editor of Lifewire’s product round-ups, Emmeline Kaser has over four years of experience researching and writing about the best consumer products out there. She specializes in consumer tech.

Alex Williams has been writing about tech and games for the past five years. He covers a range of topics from video games to wearbales. His background as a front end web developer and UX designer also gives him insight into games.

Ajay Kumar is Tech Editor at Lifewire. With over seven years of experience in the industry, he's reviewed everything from phones and tablets, to VR headsets and smart home devices. He owns an Oculus Quest and he's a big fan of zombie shooters like Arizona Sunshine and Killing Floor, as well as space-based VR games.

What to Look for When Buying VR Games

Compatibility - It's important to consider if each game is compatible with the headset you have. Mobile headsets like the Dodocase or Pop! Box Cardboard 3.0 tend to work with both iPhone and Android devices, while the Samsung Gear VR will only work with certain Samsung phones.

Graphics - While everything might be in VR, that doesn't mean quality is equal. Some games come in 1080p HD with high frame rates, while others are lower quality and you'll notice the pixels more. Some graphics tend to go for the photo-realistic look, while others are stylized.

Gameplay - The big advantage of VR is 360-degree field of view and motion. Most games will offer this feature, though some are rail shooters and will give you a more constricted way to move through the world. Horror games often take advantage of directional audio to add the the environment.