Never ask someone to repeat themselves again 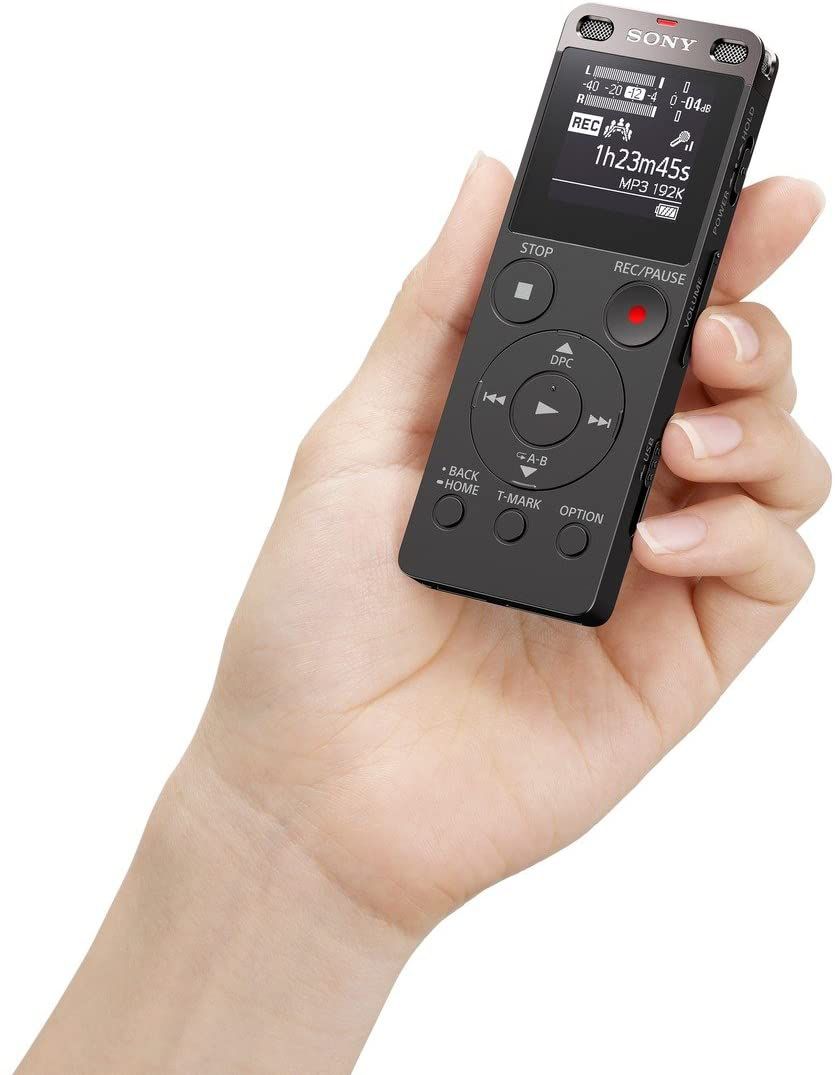 Sony’s ICDUX560BLK digital voice recorder is another terrific option that offers excellent performance for lectures, meetings, and interviews. Capable of recording in MP3 format with a highly sensitive s-microphone, the Sony adds 4GB of internal memory that can hold up to 159 hours of recording time while organizing files into more than 5,000 possible folders for easy navigation. Our reviewer found file management to be a breeze with an easy onboard system for moving, erasing, dividing, and locking files with minimal effort courtesy of a smart menu system.

The already eye-popping recording time is expandable via microSD up to 32GB of total storage for nearly eight times the recording space. The backlit displays add quick access to the date, time, and current recording mode, while a built-in earphone mini-jack offers private playback. Transferring files off the Sony is a snap, thanks to a built-in USB port that plugs right into both Windows and Mac computers. 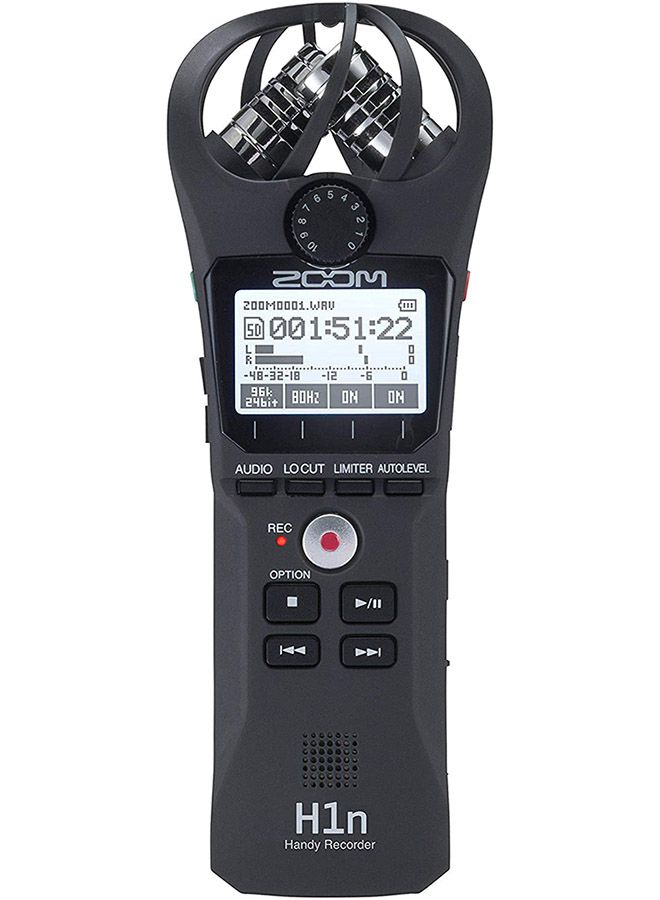 The sleek, small Zoom H1n Handy Recorder is perfect to take on the go, whether you’re recording class lectures or even starting your own podcast. Surprisingly rugged (and pocket-sized), it has a pair of built-in 90-degree X/Y stereo microphones designed to meet the lofty needs of the modern-day creator. And as an added bonus, they also support multiple MP3 and audio formats. The onboard limiter allows for distortion-free recording up to 120 dB SPL, so you can even record a concert without compromising on audio quality. Jeff praised the quality of the 24-bit audio recording, especially when it came to hearing the finer details in the sound.

Playback speed control doesn’t alter pitch, so musicians learn new music and journalists can transcribe audio, free from concerns over quality shifting. Songwriters and musicians can take advantage of the overdub feature to layer new audio on top of previous recordings to experiment with different sounds. The 1.25-inch monochrome LCD display is easy to read, and the one-touch controls are intuitive and simple to use, making it a breeze to capture and record. 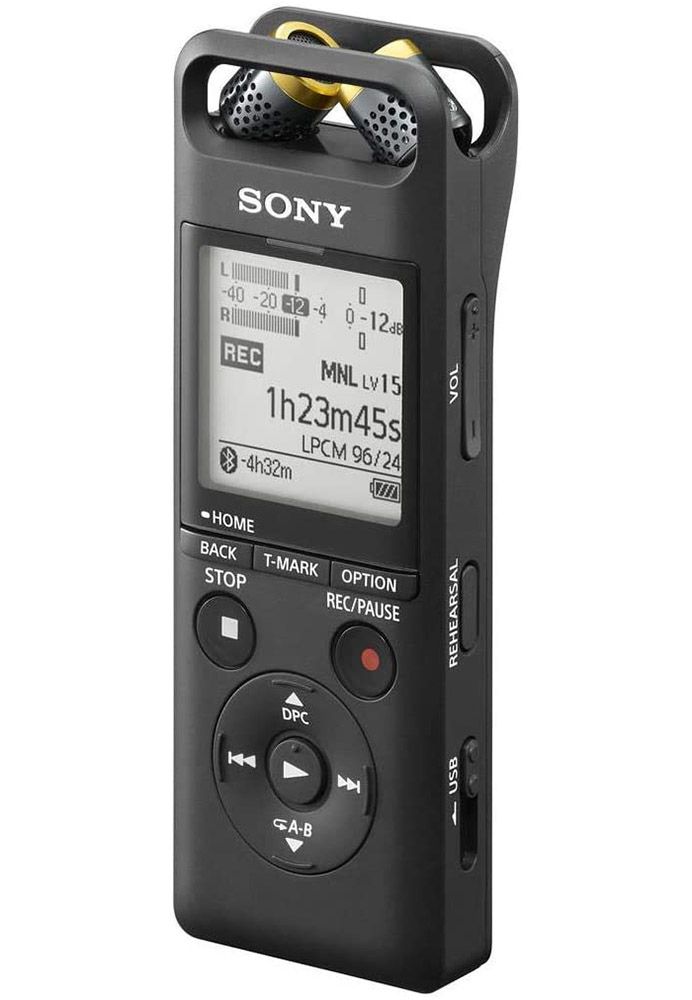 Ideal for nearly any type of environment, the Sony PCM-A10 is a high-resolution voice recorder that excels at capturing crystal-clear audio while minimizing distortions. It offers outstanding features for the price, including adjustable microphones for quick and easy sound optimization to match your environment whether it's for business, music or outdoors. Our reviewer particularly liked the adjustable microphone and easy interface.

The Sony takes voice recording to an entirely different level with even more features such as remote control access via an Android or iOS application that can start and stop recordings, as well as adjust levels and settings directly from a smartphone. The 16GB of storage allows for hours of audio recording directly on the device, while the inclusion of a microSD slot offers even more storage capacity.

Transferring recordings off the Sony is incredibly straightforward—just plug the PCM-A10 directly into a computer via USB to easily move your audio files.

"The Bluetooth connectivity is a game-changer, allowing you to monitor the audio and control the device wirelessly." — Jeff Dojillo, Product Tester 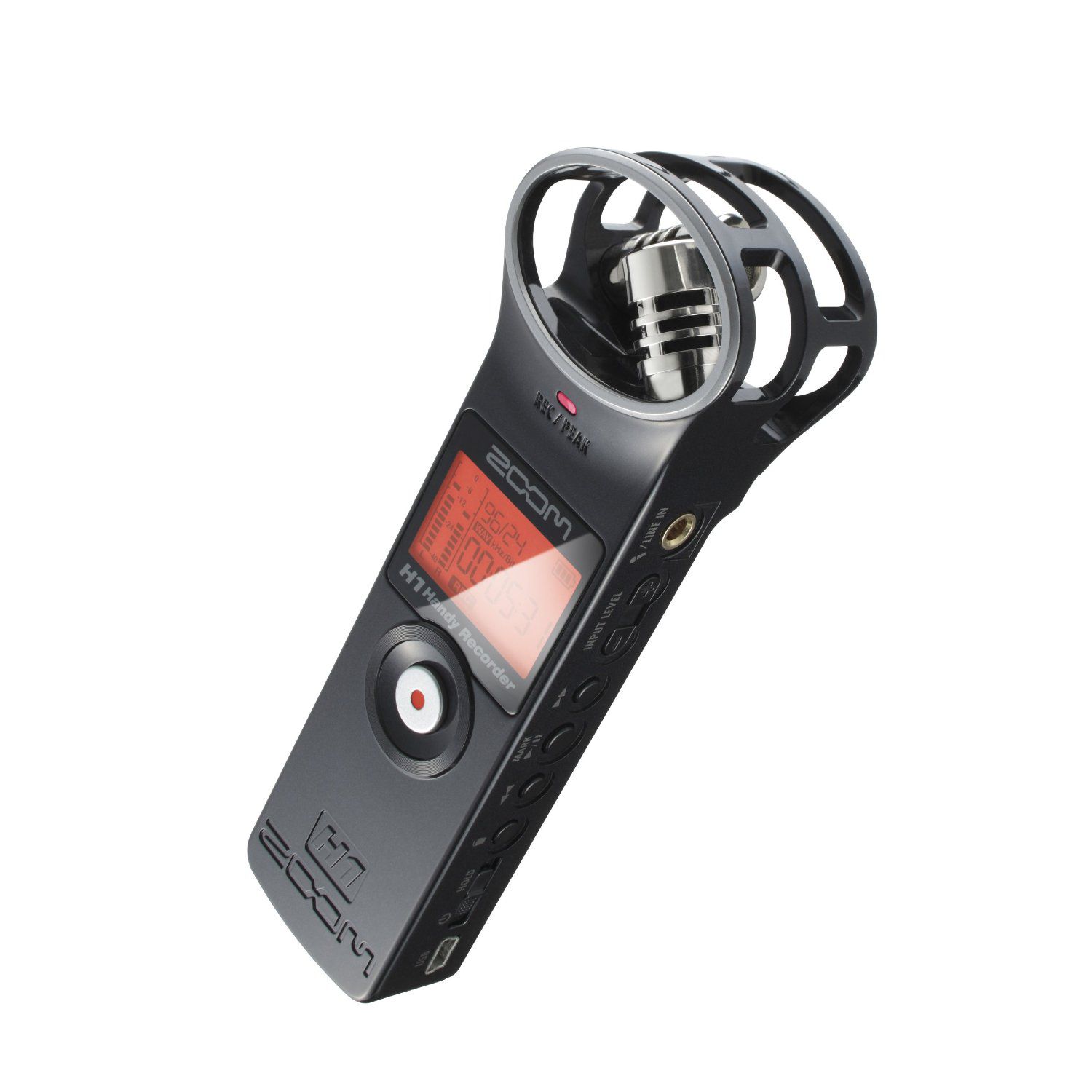 When it comes to the ideal combination of great microphone, size, and design, the Zoom H1 is a favorite choice for our list. Roughly the size of a candy bar, the Zoom H1 is more than meets the eye. Courtesy of the X/Y microphone arrangement, the H1 enables a wide area of voice reception that also minimizes sound, which allows for high-quality sound to come in and record. Powered by a single AA battery, you’re offered around 10 hours of life before recharging.

The included 2GB microSD card is in place of onboard storage and, while expandable, we’d prefer to have at least some onboard memory to start. There is an included SD card so you easily transfer data from the microSD card to a PC or Mac alongside plugging into your computer via the USB 2.0 slot. The tripod mount on the back offers expandability and additional functionality and could be perfect for attaching to the hot shoe on your DSLR or onto a tripod. Mounting the unit on a tripod? It sounds a little strange but it would, in fact, give you additional control over the direction of the microphones and eliminates any additional noise that emanates from hand-held recording.

If you’re looking for even more control over removing external wind noise, you can purchase a windscreen separately to utilize in less-than-ideal windy conditions. Overall, the highlight of the H1 is the microphone and it does not disappoint with good stereo image, high sensitivity and automatic recording levels that sound great for interviews, meetings and the like. 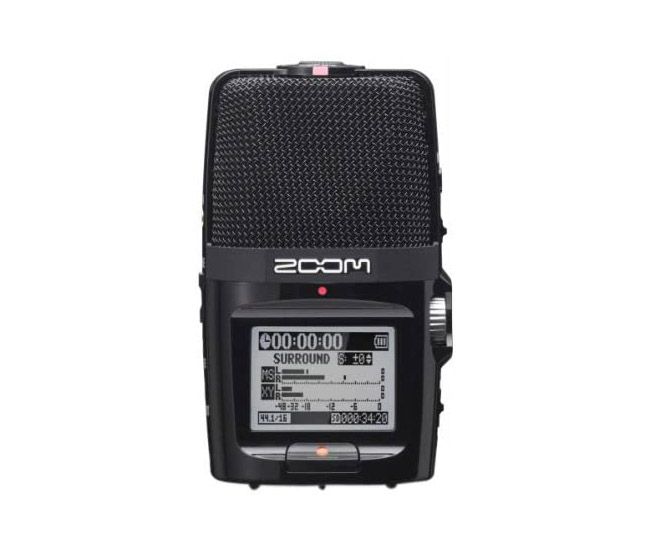 Compact with sleek looks, the Zoom H2n is billed as one of the only voice recorders to come with five built-in microphones and four different recording modes, so it’s more than capable of handling everything from a live concert, rehearsal recording, lectures or office meetings. Recordings go directly to the SD card with expandable storage up to 32GB to allow for hundreds of hours of recordings. On-board effects such as compression, chromatic tuner and low-cut filtering help quickly maximize performance for the best possible voice record result.

Extras such as auto gain, auto-record and pre-record features work along with the data-recovery function to add even more options that help make the Zoom second-to-none in the voice recorder space. Additionally, the Zoom is the lone voice recorder available for properly recording 360-degree “spatial audio” files that are native to Google’s JUMP virtual reality platform and is compatible with YouTube. A line-in jack adds the option of an external microphone for enhanced performance, while the 130-gram weight and 1.68 x 2.66 x 4.5-inch sizing make it ideal for sticking right in a pocket. 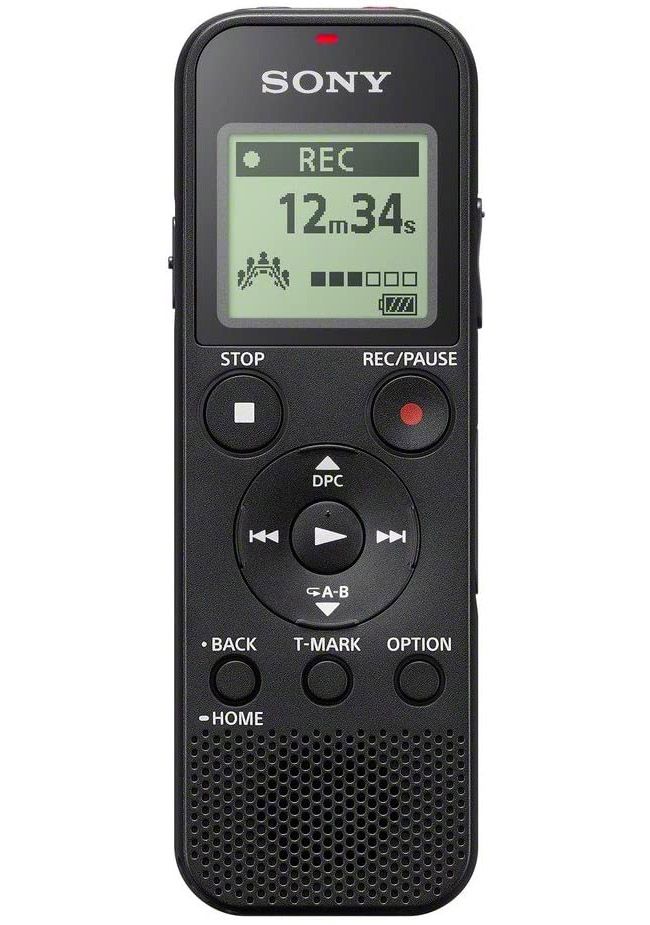 Compact and easy to use, the Sony ICD-PX370 is a popular voice recorder that won't break the bank. It's a fairly standard USB voice recorder that records mono audio (if you want stereo, you should check out the ICD-PX470). It has a small monochrome LCD screen to show recording time and battery life, the standard set of buttons, and the ability to plug in via USB to transfer files to your PC. Battery life is 57 hours for recording MP3 files, and it comes with two AAA batteries. It's good value for interviews, note-taking, and lectures.

The best voice recorder is the Sony ICD-UX560 (view on eBay). It's compact and portable, the button layout is simple, and it's easy to transfer data through the USB. The 4GB internal storage and expandable SD card slot is a bigger selling point. We also like the Zoom H1n (view on Amazon) for a more professional setup. It comes with a bundle of accessories including a mic, tripod, batteries, and cleaning cloth.

David Beren is a tech writer with 10+ years' experience. He has written and managed content for companies like T-Mobile, Sprint, and TracFone Wireless.

Jeff Dojillo is a Los Angeles-based writer and photographer who's experienced with using tech in his workflow.

What to Look for in a Voice Recorder

What will you be using your voice recorder for? If it’s just for personal memos and notes, you probably don’t need top-tier recording quality. But if you’re using it to do interviews or keep track of conversations in noisy places, then the quality of the recording is very important. For superior quality, you may want to look into a model that has built-in noise reduction. Aside from the standard MP3 audio files, if you want higher quality look for voice recorders that support FLAC and AAC. because those will have less quality loss.

Like any other portable device, battery life is important when it comes to voice recorders — especially if you’ll be using it often during the day. Some of these devices use AA or AAA batteries, while others recharge via USB. Others even have a built-in USB port so you don’t have to carry an extra cord. Think about what’s most convenient for you when it comes to these two factors. Smaller voice recorders can usually last around 10 hours, which is enough for a workday, while higher-end models can last up to an impressive 60 hours.

A voice recorder is something you want to be able to tuck into a pocket or purse with ease. Often, there's a tradeoff between size and recording quality (due to the microphone), so you want to make sure you find a device that’s a perfect balance of the two.