Perfect for gaming, listening to music or phone calls

by
Don Reisinger
Writer
Don Reisinger is a tech writer with more than 12 years' experience. His work has appeared in Fortune, PCMag, CNET, and The New York Times, among others.
our editorial process
Don Reisinger
Audio

The Rundown
Best Overall:
Razer Kraken at Amazon
"The headset virtualizes a surround sound experience in the two earcups to make it seem like the sound is all around you."
Best Budget:
Logitech USB Headset at Amazon
"It comes with noise-canceling technology, so you sound good when talking to someone else."
Best Lightweight:
Mpow 071 at Amazon
"The earcups are made with memory foam and wrapped in what Mpow calls “skin-friendly protein leather” for extended use."
Best Design:
BENGOO G9000 at Amazon
"The G9000 comes with a stereo-quality sound that’s bolstered by a built-in subwoofer."
Best Surround Sound:
HyperX Cloud II at Amazon
"The headset will take the sound and virtually beam it all around your head to approximate the experience of surround sound."
Best Mic:
Razer Electra at Amazon
"You can calibrate the audio flowing through the headset to create a personalized audio experience."
Best for Comfort:
HyperX Cloud Revolver at Amazon
"Its earcups are overstuffed with “signature” memory foam and made from premium leatherette so they feel soft on your ears."

Not every computer comes with easy access to a 3.5mm audio jack, that's where the best USB headsets come in. Besides consolidating input and output into a single cable, USB headsets can offer superior audio quality to their 3.5mm counterparts, thanks to a built-in Digital to Analogue Converter (DAC) which completely circumvents the need for the onboard sound card on your PC.

Headsets like the Mpow 071 at Amazon sport a "barely-there" feel that's perfect for anyone spending an extensive amount of time video conferencing or on calls. Whereas, something like the Razer Kraken 7.1 Chroma at Amazon features surround-sound and a comfortable fit that's perfect for gamers.

Now more than ever, a pair of headphones with a solid boom mic is an essential part of any setup. For more tips on how to round out your work from home setup, make sure to read our guide on the best work from home tips before diving into our top picks for the best USB headsets.

Razer’s Kraken 7.1 Chroma is one of the more advanced USB headsets on the market, thanks in no small part to a built-in 7.1 virtual surround sound engine. The feature virtualizes a surround sound experience in the two earcups to make it seem like the sound is all around you.

Better yet, a feature called Razer Synapse is available that lets you control the surround sound experience and customize how it’s played on many virtual channels.

The headset itself comes with bulky earcups that are designed to fully envelop your ear. They’re made with extra padding, however, so they should deliver solid comfort after hours of playing video games or communicating with friends and family halfway around the world.

The Razer Kraken 7.1 Chroma also has a retractable microphone that's easy to move out of the way when it’s not in use. According to Razer, the microphone offers noise cancelation and has been specifically tuned to facilitate higher-quality audio out of the mic. If you want to use it for a podcast, then, it might be suitable.

True to Razer form, there’s even the option to customize the look and feel of your Kraken 7.1 Chroma. On both earcups, you’ll find a Razer logo that can be customized to the color of your choosing. In fact, Razer says the headset supports up to 16.8 million colors.

One other note: If you’re not a fan of the Kraken’s earcups, you can remove them and replace them with other options sold separately by Razer. 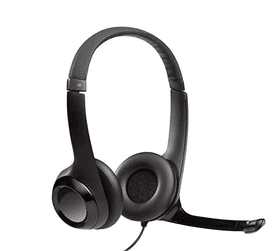 Buy on Amazon Buy on Walmart Buy on Officedepot.com

The Logitech USB Headset H390 is a nice, affordable option if you don’t typically use a headset but might need one every now and then to get work done or have a quick call with friends.

The headset’s earcups come with cushions that sit atop your ears but don’t quite envelop them. The headset also has a plastic finish, which might make it feel a bit cheap but also helps to keep the price down.

The built-in microphone can swivel up and away from your mouth when you’re not speaking and when you are, it comes with noise-canceling technology, so you sound good when talking to someone else.

Logitech’s USB Headset H390 has volume and mute controls on the cable and it’s compatible with both Windows and Apple’s macOS platforms.

Buy on Amazon Buy on Aliexpress.com

Mpow’s 071 is designed for anyone who wants to save a few bucks on a lightweight headset. The device isn’t designed for long use or best-in-class audio, but it will suffice for the vast majority of people who only want a headset for a quick chat with friends and family.

The Mpow 071 has heavily padded earcups that sit atop but don’t quite envelop the ear. Those earcups are made with memory foam and wrapped in what Mpow calls “skin-friendly protein leather” for extended use. That said, Mpow recommends you remove the headset every hour to two hours to let your ears relax.

The headset comes with a 40mm driver, which should translate to solid sound quality in most uses. In fact, Mpow said that Skype calls, specifically, should sound “clear” and “balanced” with help from the driver and its high-definition audio.

On the microphone side, you’ll find a unidirectional option that can be twisted so it’s perfectly placed in front of your mouth. While the microphone isn’t fully noise-canceling, Mpow said that it should reduce unwanted background noise. 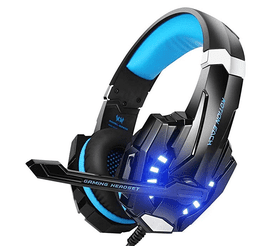 Buy on Amazon Buy on EBay Buy on Newegg.com

If you’re in the market for a stereo gaming headset that comes with a futuristic design, complete with LED lights on the side of each earcup, the BENGOO G9000 is for you.

The G9000 has a decidedly different design than most other headsets. It’s big and bulky and in addition to the big earcups that will wrap around your ears, has padding at the top to make it more comfortable to wear over a long period of time.

BENGOO’s headset is designed for gaming first and can work with a variety of consoles, including PlayStation 4, Xbox One, and others. You can also plug the headset into a computer or mobile phone if you’re so inclined.

The G9000 comes with a stereo-quality sound that’s bolstered by a built-in subwoofer to deliver all the bass you’d want to hear in a game. There’s also a 40mm driver in the unit that BENGOO says, will ensure solid sound clarity.

The microphone can be rotated up when it’s not in use. When you’re ready to talk, you’ll find an omnidirectional mic that uses noise-canceling technology to focus sound on your voice and nothing else.

While you’re playing a game, you’ll find a volume control on the 49-inch cable that’s connected to the headset, allowing you to adjust sound on the fly. 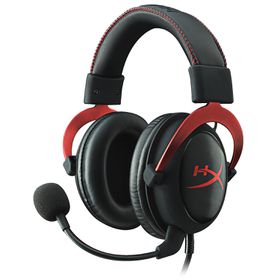 The HyperX Cloud II is one of the pricier options among USB headsets, but for the extra price you’ll pay, you’ll be able to take advantage of several advanced features.

Chief among those features is support for virtual 7.1-channel surround sound. So, while you’re playing a game or watching a movie, the headset will take the sound and virtually beam it all around your head to approximate the experience of surround sound. The drivers inside the earcups are 53mm, which means you should be able to enjoy higher-quality sound than in most alternatives.

The microphone attached to the headset is a bit bulkier than most, but it comes with noise- and echo-canceling features for higher-end sound. Better yet, you can remove it, if you don’t feel like talking to someone else.

The HyperX Cloud II comes with big earcups that will envelop your ears and keep you firmly immersed in the audio experience. The ear pads are made of memory foam for additional comfort, but if you’re not so fond of them, you can also remove them and attach the included velour ear pads.

HyperX is pitching its headset as suitable for game consoles, including Xbox One, PlayStation 4 and Nintendo Switch, but you can also connect it to computers.

Buy on Amazon Buy on Walmart Buy on Razer.com

The first thing that will strike you about the Razer Electra USB V2 is its design. The headset comes with a two-tier head area that allows for comfort regardless of your head size. The bottom component is a leatherette cushion that comfortably sits atop your head. The top component is the frame that keeps everything in place.

Aside from that, you’ll find two leatherette ear cushions that envelop your ear and can swivel for additional comfort.

The earcups come with built-in Razer Surround, which mimics 7.1-channel surround sound for your ears. You can also calibrate the audio flowing through the headset to create a personalized audio experience.

Razer’s Electra USB V2 comes with a mic you can detach when it’s not in use. When you’re ready to chat, however, you’ll find that it’s no standard mic. Instead, Razer’s headset comes with a boom mic that translates to nicely loud and crisp sounds. In fact, Razer promised solid sound “clarity” with its Electra.

The HyperX Cloud Revolver S is one of the pricier USB headsets on the market, due in no small part to all of the audio features it bundles.

Everything that’s attached to the HyperX Cloud Revolver S can be detached. So, in the event you don’t need the microphone, simply disconnect it. And if you need to connect the headset to a 3.5mm headphone jack instead of USB, you’ll have that option, as well.

The HyperX Cloud Revolver S has also been designed for comfort. Its earcups are overstuffed its “signature” memory foam and made from premium leatherette so they feel soft on your ears. The headphones are made with a double steel frame and a soft leatherette area above your head is designed to move with you, so you’re always comfortable.

The HyperX Cloud Revolver S is ideally suited for the PC and consoles, like the Xbox One and PlayStation 4.

Our favorite USB headset for work or play has to be the Razer Kraken 7.1 Chroma, with its remarkable sound quality and super comfortable fit. However, if you need something a little more budget-conscious, the HyperX Cloud II Gaming Headset offers many of the same features with only a small reduction in terms of the quality of materials.