Upgrade Your Computer Screen with This Must-Have Port

If you need a panel that's compliant with the latest charging and data transfer standards, look no further than our collection of the best USB-C monitors. Besides providing you with excellent resolution and refresh rates, these monitors are compatible with a variety of USB-C hubs and laptops, meaning you don't need a device with an HDMI or Display Port to take advantage of a dedicated monitor.

Unfortunately, due to this expanded functionality, these monitors rarely come cheap, meaning the first thing you'll want to look at before committing to any of these panels is cost. Monitors like the AOC i1601 and ASUS Designo MX27UC over at B&H can cost well over $500. Of course, you'll also want to pay attention to the overall resolution of each monitor, as well as other potential connectivity options. Make sure to investigate our guide to USB-C, to learn more about what this means for your home setup. 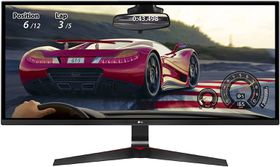 In the world of USB-C-ready monitors, there’s really no such thing as a budget-friendly monitor. Instead, there are those that have exorbitant price tags and those that come with more realistic prices for the typical consumer. LG’s 34UM69G-B fits into the latter category.

LG’s monitor comes with a 34-inch flat screen with a 21:9 aspect ratio. The display has a 2560 x 1080 resolution, which should suffice for most uses. There’s also a 1ms Motion Blur Reduction feature so fast-paced visuals will still look good on the monitor.

The monitor comes with a variety of controls to help you improve your visual experience. AMD FreeSync, for instance, will ensure that your graphics card’s frame rate matches the monitor’s refresh rate. A Dynamic Action Sync means the monitor is ideal for video games, and a Black Stabilizer option will keep your dark scenes looking the way they should.

In addition to the USB-C port, you’ll find a variety of input options, including HDMI 1.4 and DisplayPort. You’ll also notice some nice design accents, like the V-Line's standard pops of red color to add to the broader visual appeal of your screen.

When you want the very best USB-C monitor, there’s no better choice than LG’s 27UK850 27-inch 4K monitor. Compatible with HDR10 high dynamic range, the LG offers a level of color and brightness that is unmatched. The HDR effect also supports upscaling non-HDR content so it looks even better on the display. The color itself hits on 99-percent of the sRGB spectrum. This premium IPS experience makes it ideal for photographers, video editors, graphic designers, or anyone who counts on accurate colors. With HDCP 2.2 built-in, the monitor plays 4K video from streaming services, game consoles, and Blu-ray players.

Just as everything about the screen looks great, so does the monitor itself. The half-circle curved stand is sturdy and prevents tips. The ultra-thin bezels — the frame around the monitor — are just 7mm from the edge of the display. Adjusting settings on the monitor is smartly handled via a joystick button resting underneath the bottom bezel. Tilting forward up to five degrees or backward up to 20 degrees, the monitor also can pivot 90 degrees to operate as a portrait monitor. 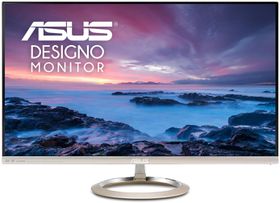 The monitor comes with a 4K resolution of 3840 x 2160 pixels and an outstanding viewing angle of 178 degrees, so you and your friends can enjoy content in a room. An Asus Eye Care technology is built in to eliminate screen flickering and reduce eye fatigue with a blue light filter. And since the monitor displays such a high resolution, you can use your USB-C port to pair with devices delivering 4K video.

To complement that visual experience, Asus has bundled two 3W speakers and amplifiers in the Designo. The company has also developed a SonicMaster sound optimization technology with ICEpower to ensure the Bang & Olufsen speakers are sounding good regardless of where you are.

Asus was also quick to tout the Design’s design, which comes with thin bezels all around and a variety of ports to choose from, including DisplayPort, HDMI and USB 3.1. 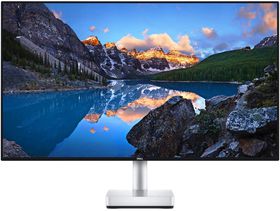 True to form, Dell offers one of the best monitor options for office use with its Dell S2718D.

The monitor, which comes with a 27-inch LED display featuring a resolution of 2560 x 1440 pixels and a 16:9 aspect ratio, has a nearly borderless design that leaves no room for any ports. So, Dell bundled all of the ports in the base of the monitor, giving you the ability to plug in devices that rely on USB-C, HDMI and other ports.

Interestingly, the Dell design lends itself to a more portable-conscious customer. Unlike many other monitors that can weigh 10 or even 20 pounds, Dell’s S2718D weighs just 6.5 pounds, making it easy to move from one place to another.

To deliver high-quality visuals, Dell has bundled high dynamic range, or HDR, support in its monitor. The company was also quick to note that its monitor has a high contrast ratio to bolster its visual appeal.

The Dell S2718D comes with a USB-C cable to power the monitor. The device’s USB-C port can be used for double duty, allowing you to plug in a notebook to not only charge the notebook through your monitor but also deliver dual-display visuals. 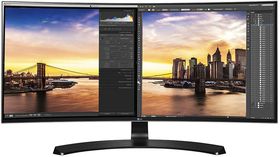 Sometimes, having a monitor that’s tethered to the wall just doesn’t make sense. And it’s in those cases where the AOC i1601fwux could prove to be the very best option you consider.

Unlike many other monitors, the AOC option is portable and comes with a kickstand of sorts, so you can prop it up whether you’re in the office, at home or on an airplane. The screen measures 16 inches and comes with a full-HD resolution of 1920 x 1080 pixels. Its contrast ratio isn’t necessarily the best at 700:1, but for that loss in visual fidelity, you get the opportunity to carry the screen with you wherever you go.

Best of all, the AOC doesn’t actually require a power cable. Instead, you simply plug in a USB-C cable from whichever device you want and the screen will power up and display your visuals. And you can even pivot the screen to view content in either landscape or portrait mode.

Since the AOC monitor is designed for portability, it’s perhaps no surprise that at .33 inches, it’s exceedingly thin. And since it only weighs 1.8 pounds, you can throw it into a bag and get going without it placing too much of a burden on your back.

Nothing less than a spectacular 4K display with USB-C connectivity, the BenQ EW3270U is an excellent choice for a dedicated 32-inch 4K panel for your MacBook or Windows laptop. This monitor features remarkable color accuracy as well as a litany of bells and whistles making for a top-notch choice for a monitor. This includes AMD FreeSync compatibility, as well as Flicker-free, Low Blue Light, and Brightness intelligence features, making it ideal for anyone that spends way too much time staring at their screen for work or otherwise.

All of this is compounded by a price tag that won't break the bank. For anyone that needs an excellent 4K display with USB-C connectivity, the BenQ EW3270U is certainly a monitor to keep your eye on.

While its certainly far from the most budget-friendly option on our list, the LG 34UM69G0-B is an excellent and sharp ultrawide panel that's sure to elevate your home office setup and produce envy among your friends. However, if you're looking for a more budget-friendly option, the Dell S2718D will definitely be more your speed.

What to Look for in a USB-C Monitor

USB-C hub - If your laptop has a limited number of USB ports, look for a monitor that includes a built-in USB-C hub. This is a great feature, since it allows you to use a single USB-C connection on your laptop to send video to your monitor, power your laptop, and even plug in as many extra USB devices as the monitor supports.