Options for gaming, ambidextrous use, and more

Jennifer Allen
Writer
Jennifer Allen has been writing about technology since 2010. Her work has appeared in Mashable, TechRadar, and many more publications.
our editorial process
Jennifer Allen
Computer Components View More 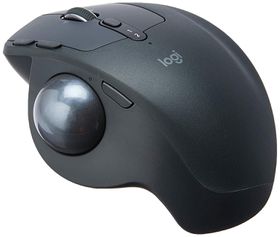 Most users need a trackball mouse that works for a variety of different tasks. That's certainly the case with the Logitech MX ERGO Trackball Mouse. It has an ergonomically sculpted design that molds to your hand, ensuring no risk of cramping or aches over extended use. That further helps with reducing muscle strain in your wrists, too.

Because it has an adjustable hinge, you can customize the trackball angle from 0 to 20 degrees to suit how you use it, with the right-hand side of the device serving well as a base for your palm. There's also a scroll wheel along with a tilt and middle click button. For precision use, you can change the speed and accuracy of the cursor at the touch of a button on the mouse itself. All the buttons are fully customizable as well if you have other plans for their use.

Rather conveniently, you can also connect it to up to a triad of different Macs or Windows PCs by way of a receiver that allows you to switch among the three. The Logitech MX ERGO is wireless, too, and its battery lasts up to 70 days between charges. In a rush to replenish? Plug it in for one minute and it'll sustain a full day's work. And if you’re keen about style, it looks both chic and professional, a rarity for mice.

A trackball mouse doesn't have to cost a lot to still be high quality. Logitech's Trackman Marble Programmable is a good example of that. The trade-off with the price is that it's a wired mouse, but that won't be an issue for those of us tethered to our desks. And don’t expect it to look particularly fancy; this is very much about practicalities over flashy aesthetics.

While it might not look like much, the Logitech Trackman has a lot going for it. It has a sculpted ambidextrous design, so whichever hand you use with your mouse it'll still feel comfortable in your grip. It's designed so that you never need to move your arm to manipulate the cursor, cutting down on potential muscle strain and simply saving you time. It has four programmable buttons that you can set up according to your preferences, with two of them defaulting to Back/Forward buttons for easy website navigation.

The big advantage to it being wired is that it requires no setup for Windows or Mac-based computers. Simply plug it in and it works. That's perfect for those who aren't tech-savvy. If you’re on a budget or not sure if a trackball mouse is for you, this is a great place to start.

Comfort is paramount when using any mouse, both in terms of ease of use and saving you potential harm (especially from the dreaded carpal tunnel). The most comfortable trackball mouse out there is the Kensington Orbit. It's a small device, but one that focuses on a large ball for easy control and a nice place to rest your hand.

Despite that small size, there's also room for two buttons that can be programmed to do whatever you need them to. It's wireless, which is ideal for laptop users who roam from coffee shop to coffee shop. Its battery life is about 3 months, so there's no need to recharge it often at all. Ideally, that's so you can toss it in your bag and take it with you on your travels.

The Kensington Orb might look unremarkable, but it has everything going for it in terms of comfort as well as ease of use. It's compatible with all Windows, Mac, and Chrome-based computers, too.

It can't hurt to have a cluster of buttons on your trackball mouse. That way, you can easily customize and program them at the touch of a button. The Elecom M-DT2DRBK Wireless Trackball Mouse has an impressive selection of eight different buttons to adjust to your liking. Located on different areas of the mouse, you won't have to worry about stretching your fingers to reach them either.

The style of the Elecom M-DT2DRBK is designed around the six skeletal structures of your hand, aiming to ensure that you never feel discomfort while using it. You’ll be impressed by just how natural it feels under your grip. There are also options to adjust the cursor speed on the fly via how the buttons are initially set up, you can achieve precise movements within seconds of picking it up for the first time.

As a wireless mouse, the Elecom M-DT2DRBK Wireless Trackball Mouse has a strong battery life, too. Expect to only charge it a couple of times a year, depending on how often you use it. An indicator light tells you when the battery is running low. 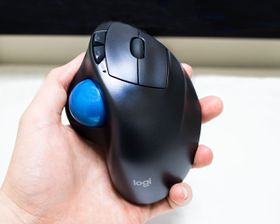 3.5
Buy on Amazon Buy on Walmart Buy on Best Buy

When you play a lot of games, you need a highly responsive mouse to control aim. The Logitech M570 trackball mouse uses lasers to track your movements rather than the usual optical method, and it shows in terms of how quickly it reacts to your touches.

Like the others, it has a sculpted design that supports your hand and reduces any need to move your arm. It has four programmable buttons that can easily be customized for specific gaming activities if you want them to. It's designed solely for right-handed users which is unfortunate for any lefties, but that's its only real flaw.

Rather than using a rechargeable battery, the Logitech M570 takes one AA battery and turns it into up to 18 months of use. That's pretty convenient if you're someone liable to lose charging cables, or that wants the simplicity of just swapping out a battery. It's compatible with both Windows and Mac based systems.

For gamers, its speedy response is going to really make a difference to how well games play out. But it also means that simply editing files or sketching out designs in Photoshop feels good, too.

For a trackball mouse, the Kensington Expert has an unusual design that admittedly takes some time to get used to. But as you'll soon see, its ergonomic stylings will convert even the most vocal skeptics into fans.

Made for ambidexterity, the device is symmetrical so no one misses out on its features. Not even lefties. It has four programmable buttons with two on each side of the trackball, so there's no inherent left- or right-handed bias. The trackball itself is large and easy to manipulate with the addition of a scroll ring so you can twist it to scan up and down documents you're browsing.

There's a detachable wrist rest that helps support your wrist alongside the hand support given by the mouse. It takes some practice to get used to but it's particularly worthwhile if you have a lot of issues with your hands and wrists.

Expect a battery life of about 90 days before it needs recharging. It's compatible with all Windows and Mac systems, as well as Chromebooks.

Most trackball mice are designed to be oversized, but we've found that the Elecom M-HT1URBK Trackball Mouse is particularly great for users with large hands. That's mostly due to its extra chunky trackball that forms the main part of the right-handed device.

Its larger-than-usual chassis also means there's a bigger palm rest, and improved grip for your fingers so you don't have to worry about moving your arm around. There are eight programmable buttons, saving you the effort of performing tasks in a more convoluted way. You can tweak the sensitivity of the cursor with a choice of three different DPI (dots per inch) settings. This is ideal for when you need to be more precise, whether that's during an intense gaming session or trying to draw a design onscreen.

There's a tilt wheel, too, with left and right scrolling buttons for easy Web or document browsing. Its buttons are a little clicky at times but otherwise, it's a great workhorse of a mouse. Being wired means you don't have to worry about battery life, and it's compatible with both Windows and Mac based computers.

The 9 Best Wireless Mice of 2020
More from Lifewire