The best devices for children to work or play on

The Rundown
Best Overall:
Amazon Fire HD 8 Kids Edition at Amazon
"ops our list for the best tablet for kids, thanks to its durability, parental controls, and great battery life."
Runner-up, Best Overall:
Samsung Galaxy Tab S5e at Amazon
"Comes with a Kids Mode and 15 hours of battery life."
Best for Pre-Teens:
Lenovo Tab 4 at Amazon
"Makes a great option because it’s fit for the whole family."
Best for Teens:
Apple iPad with Wi-Fi, 32GB at Amazon
"It has a flawless 2048 x 1536 Retina display, plus an A9 processor with 64-bit architecture and an M9 motion coprocessor."
Best Budget:
Dragon Touch Y88X Plus 7 Kids Tablet at Amazon
"Lucky for you, this tablet comes in at under $70, but still manages to check most of our boxes."
Best for Parental Controls:
Verizon GizmoTab at verizonwireless.com
"Essentially a Verizon Ellipsis tablet, just programmed with additional parental restrictions."
Best for Preschoolers:
LeapFrog Epic Academy Edition at Amazon
"The program grows along with your child, adding activities in areas he or she may need extra help."
Best for Elementary School Kids:
Samsung Galaxy Tab E Lite at Amazon
"Comes with a free, three-month subscription to Samsung Kids, a library of games, books and videos."
Most Versatile:
RCA Viking Pro 10.1" at Amazon
"It runs Android 5.0...and can run your favorite apps, including Microsoft Office suite."

The eight-inch Amazon Fire tablet tops our list for the best tablet for kids, thanks to its durability, parental controls, and great battery life. It has a beautiful, 1280 x 800 (189 PPI) display, 32GB of storage (expandable up to 256GB via a microSD card) and 12 hours of battery life. These factors combined make it a far more than just a toy, but rather a worthy educational device. The tablet comes with one free year of FreeTime Unlimited, which grants access to more than 15,000 apps, books, and games from kid-friendly companies such as PBS Kids, Nickelodeon, and Disney.

On top of that, the Amazon Fire has extensive parental controls that let you manage up to four individual profiles. You can set bedtime curfews, restrict screen time, limit access to age-appropriate content and even block Angry Birds until reading has been completed. The Kid-Proof Case comes in blue, pink and yellow and the device even has a two-year, no-questions-asked warranty. 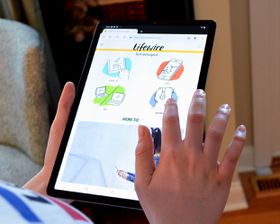 4.6
Buy on Amazon Buy on Walmart Buy on Best Buy

Older kids will get the most out of the new Samsung Galaxy Tab S5e, which can assist them as they do homework or watch their favorite shows. The 10.5-inch AMOLED screen with 2650 x 1600 pixel resolution will provide dynamic, engaging images, and the 7,050mAh battery should keep it going for up to 15 hours, so there’s no fear of running out of power in the middle of a long day or road trip.

For younger children, Kids Mode onto the mid-tier tablet, which allows you to turn your tablet into a child-friendly tool, both educational and entertaining. A PIN ensures the mode cannot be deactivated without your approval, and it comes with around 3,000 different apps for budding learners to explore different languages, improve their math skills, and interact with their favorite cartoon characters. However, unlike previous Galaxy Tabs, it does not come with a stylus and does not have stylus capabilities.

When your child has outgrown the bumper-clad tablets but isn’t quite ready for his or her own yet, the Lenovo Tab 4 makes a great option because it’s fit for the whole family. It can be customized for up to seven people, with each profile allowing different access settings, interface and storage. The add-on kid’s package includes a shock-resistant bumper for drops and bumps, plus a blue-light screen filter and fun stickers. It’s also integrated with curated, kid-friendly content, scheduling tools to limit use and browsers that surf only whitelisted sites.

But no matter your age, you’ll appreciate its brilliant eight-inch HD display, speedy quad-core Snapdragon processor, 2GB of RAM and impressive 20-hour battery life. And if you’ll mainly be using it to watch movies and TV shows, you’ll love its two high-quality Dolby Atmos speakers for immersive sound. Plus, it’s one of the cheapest tablets you can find that runs the latest Android Nougat.

When your child has graduated to a more responsible age, Apple’s 9.7-inch iPad makes an excellent option. Although it’s a bit on the pricey side compared to others on this list, it has a flawless 2048 x 1536 Retina display, plus an A9 processor with 64-bit architecture and an M9 motion coprocessor. Together they team up to make streaming Netflix, playing games and browsing the Web a breeze. Worried about too much screen time? Apple has a nifty Night Shift mode that ditches the blue hues believed to disrupt sleep if used right before bedtime.

If your teen already has an iPhone or use a Mac at school, he or she will feel instantly at home using the iOS software. If not, it’s intuitive nonetheless and has a vast selection of apps, both educational and er, not-so-educational. It has a decent rear-facing eight-megapixel camera and a less-impressive 1.2-megapixel front camera, which is disappointing because it could be a great tool for FaceTiming, but selfies are better suited for smartphones anyway. It doesn’t offer any killer new features over the previous model and unfortunately lacks support for the Apple Pencil, but it’s a bit cheaper than the iPad Pro and iPad Air 2 if you can live without them. Overall, it’s a fantastic tablet and the one that your teen is likely already begging you for.

No matter how you spin it, putting an expensive tablet in the hands of a child is dangerous. It’s bound to get dropped, dunked or even lost. So we don’t blame you if you are wary of spending $100+ on one. Lucky for you, this tablet comes in at under $70, but still manages to check most of our boxes: It’s highly durable, with a soft silicone case that comes in pink, blue, orange and green. It comes pre-installed with loads of kid-friendly content, including Disney ebooks and audiobooks. And it has advanced parentals controls that let you set timers and restrict access to certain material.

Even though it’s designed for children, it still packs a fast-performing quad-core processor, has a 1024 x 600 IPS screen and runs Android 6.0 (Marshmallow), which gives you access to just about every app you could want. All in all, it’s truly an incredible value. 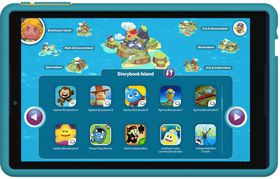 If your child is perhaps too young to have full access to the web or to unlimited screen time, the Version GizmoTab allows for a decent amount of supervision. The GizmoTab is essentially a Verizon Ellipsis tablet, just programmed with additional parental restrictions. With the GizmoTab, you can set up one-hour intervals over a 6-hour period (or unlimited). Also, to give your child an incentive to utilize the tablet’s library of educational games, you can reward their progress with increased screen time.

The children’s interface appears geared toward a younger audience (ages 3-8), with colorfully animated islands that can be navigated using an avatar; akin to other social simulator games like Animal Crossing. Each island features an array of educational games, but it's important to note they don’t come pre-loaded with the tablet. Internal storage is also fairly limited with only 6.4GB of the GizmoTab’s 16GB being available for extra downloads. Still, you can add storage space using a microSD card. The Verizon GizmoTab also features Wi-Fi connectivity and boasts five hours of battery life.

Buy on Amazon Buy on Target

LeapFrog has become a leader in children’s educational entertainment and all of its LeapFrog Academy content is preloaded on its Epic tablet. The program grows along with your child, adding activities in areas he or she may need extra help in or more harder activities to keep him or her challenged. For the first three months, kids get unlimited access to hundreds of educator-approved games, videos, ebooks and music for free, but after the trial period, the content will cost $7.99 per month.

The tablet runs Android 4.4 and has a multi-touch, 1024 x 600 screen, a 1.3 GHz quad-core processor and 16GB of memory. It also has dual cameras to take pictures and record videos. And with its basic parental controls, you can set what, when and for how long your child can use the tablet, for up to three profiles.

Buy on Amazon Buy on Walmart Buy on Samsung

Elementary school can be a defining time for children as they begin to explore their interests, and this Samsung tablet helps nurture those interests by providing educational content aligned with STEM and common core curriculums. The tablet comes with a free, three-month subscription to Samsung Kids, a library of games, books and videos from kid-friendly companies such as DreamWorks Animation, Sesame Street, National Geographic and more. (The subscription costs $7.99 per month after that.) With the simple parental controls, you can set time limits, limit app access and monitor your child’s progress on the dashboard.

The tablet has a seven-inch screen backed by a 1.3GHz quad-core processor and 8GB of onboard memory (expandable up to 32GB) and runs Android 4.4. It has a rear-facing camera for taking pictures​ but lacks a front-facing one. Still, its durable bumper case and nine-hour battery life might be enough to sway you.

If you need a tablet that can double as a study buddy, grab the RCA Viking Pro with a detachable keyboard. This tablet beats out every other device on this list when it comes to screen size – a feature that makes this 10-incher even more comfortable to type on. It also comes equipped with a 1.4GHz MediaTek MT8127 Quad Core Processor, 1GB of RAM and 32GB of built-in memory. It runs Android 5.0, which is surprisingly free of bloatware and can run your favorite apps, including Microsoft Office suite. It also has an HDMI input, a microUSB input, a USB input and a headphone jack, so you can hook up a host of peripherals such as a wireless mouse or speakers. Weighing just over one pound, it’s light enough to toss in a bag, making it a suitable stand-in for a full-fledged laptop.