Rebecca Isaacs is a writer and an educator. She covers all sorts of products, from video games to e-readers and light therapy alarm clocks to standing desks.

If you want something more robust than surge protection, you should also take a look at our full list of the best uninterruptible power supplies (UPS). For everyone else, read on to see our overview of the best surge protectors. 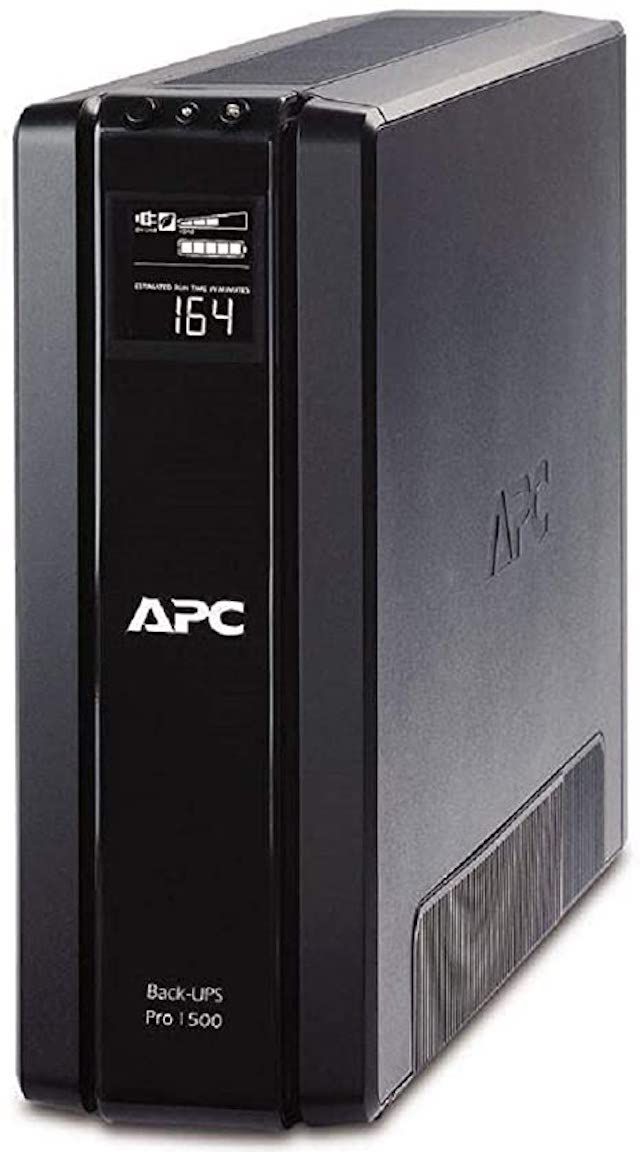 If you’re prone to derechos or ice storms that knock out power, the APC Back-UPS Pro 1500VA is your tech’s lifesaver. Part-UPS and part-surge protector, it allows you to decide which of your items needs to be protected from spikes and which items you would prefer to be on the UPS supply. The UPS side offers up to 865W of battery life to keep tech functioning during power outages, while the surge protection side keeps any currents consistent and safe.

A PowerChute system also keeps you informed on what equipment is using how much voltage. If you prefer to shift some of the voltage elsewhere, you can do just that. You can even swap out to a stronger backup battery if you feel the one included isn’t suitable for your home.

"Small electronics (like lamps, radios, and battery chargers) are fine with joule ratings under 1000. But for computer or home theater equipment, you’ll definitely want to consider surge protectors with joule ratings of 2500 or more." — Jeremy Laukkonen, Product Tester

It’s no surprise that another APC power surge protector is here—the APC Power Strip is an equally brilliant contender for the top slot. Significantly smaller than the Back-UPS Pro Surge Protector, the APC Power Strip offers up to eight different outlets for protection. Should you forget your phone charger across the house, no worries—this surge protector comes with two USB ports for a charge of up to 2.4 amps.

Because it’s solely a surge protector, it weighs less than 2 pounds and can be easily transported around the house or tucked away behind a desk. While it has only eight outlets (but comes with up to 11 total), four of those are transformer outlets to protect your equipment. Best of all, it has a 2638 joules rating, so your office equipment will be protected from any power spikes.

Tips for Picking the Right Surge Protector for Electronics

"Small electronics (like lamps, radios, and battery chargers) are fine with joule ratings under 1000. But for computer or home theater equipment, you’ll definitely want to consider surge protectors with joule ratings of 2500 or more." — Stanley Goodner 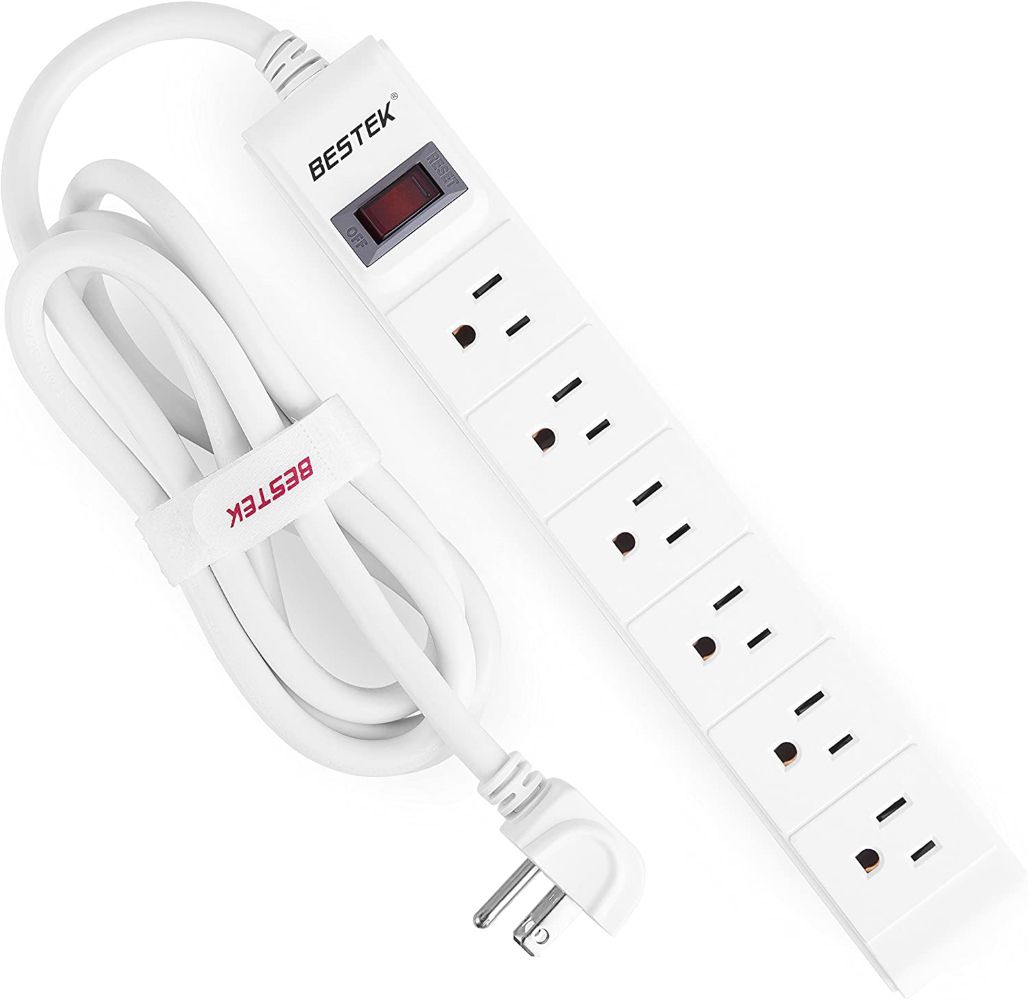 This BESTEK surge protector comes in two different colors and offers an unbeatable price for peace of mind. A power light indicates whether it’s protecting your tech from power surges and a built-in phosphor bronze conductor keeps up to 200 joules safe. Overload protection and copper technology will keep anything plugged in from overcharging and overheating. Small and under 2 inches thick, the BESTEK can fit discreetly behind almost any small appliance or underneath a desk thanks to its 6-foot long extension cord. 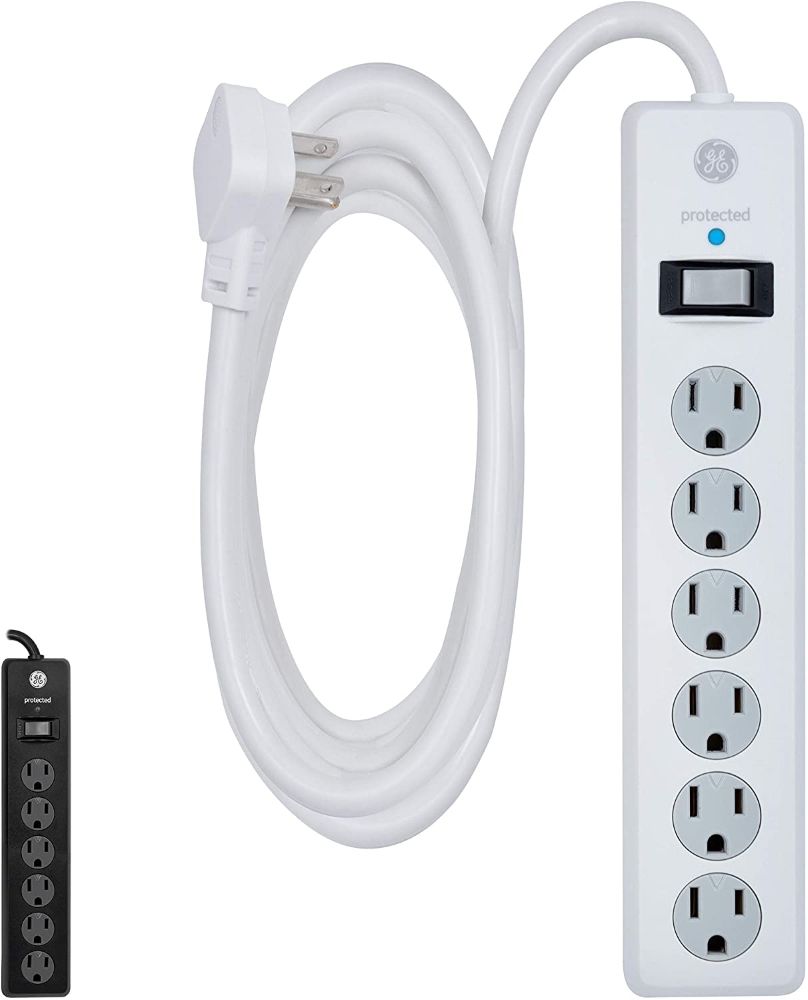 GE’s 6-Outlet Surge Protector is by far the best value if you’re looking for a cost-conscious option. Offering options between 1- and 20-foot long cords, it can work with almost any space within the home. If you’re short on space, it can mount on the wall of a studio apartment, and can even work with any cord due to its swivel plug-ins. 800 joules keep almost all tech equipment safe from power spikes, and a built-in circuit breaker will keep tech safe at any time.

"After a month of use, the 800 joules keeps my work laptop safe. Bonus points go to the swivel feature so I can move the laptop around my office without any issues." — Rebecca Isaacs 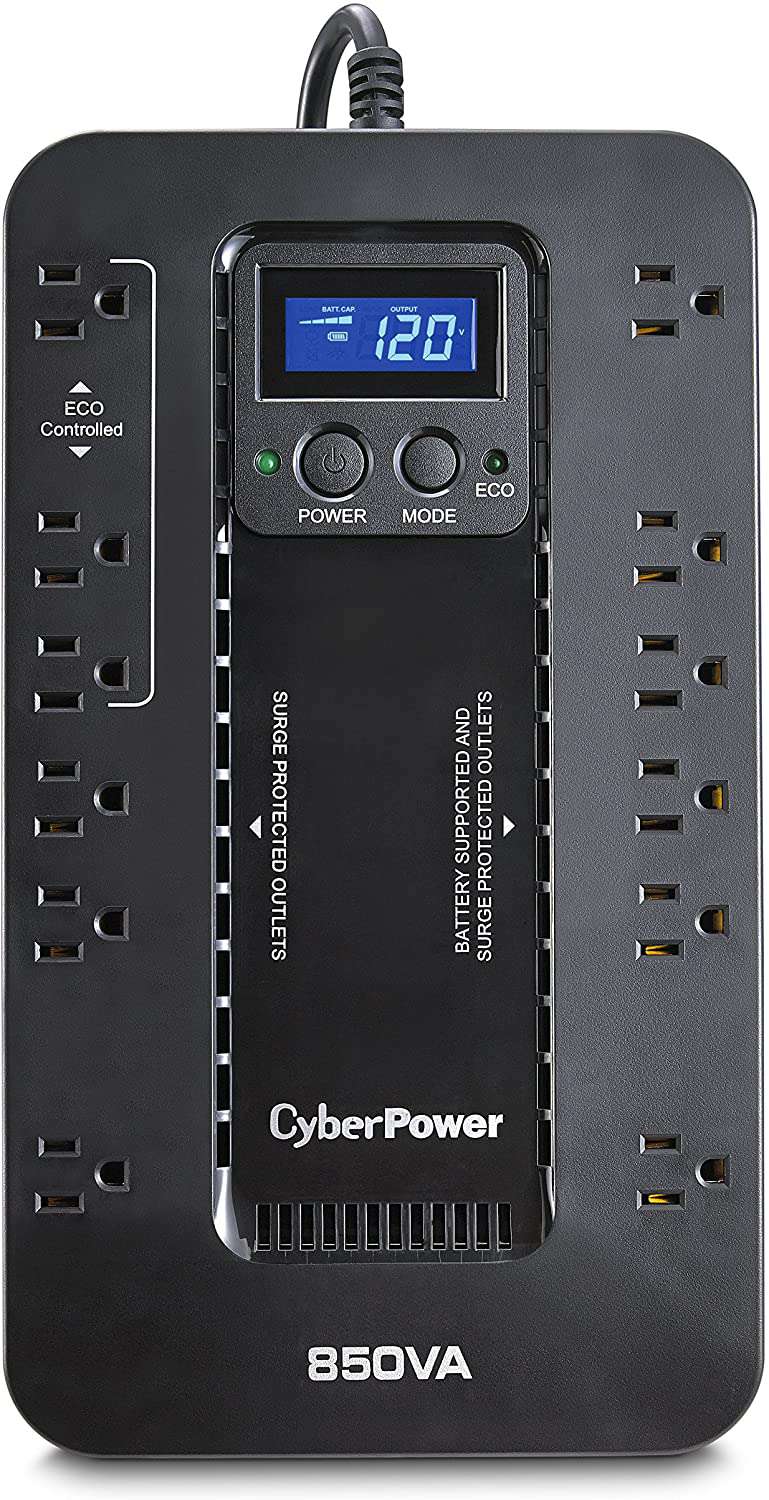 The CyberPower EC850LCD is a great option to keep your equipment protected during a power outage. Half of the CyberPower is a UPS system, so you can keep your computer running long enough to safely turn it off or charge phones during an emergency. Even better, if you’re in a pinch, it can safely run for up to 120 minutes.

The other half works solely as a power surge protector, keeping over 500 joules safe. Another perk to this surge protector is that it’s eco-friendly, using compact power chargers and power inverters to create extremely efficient power in the event of a power outage. 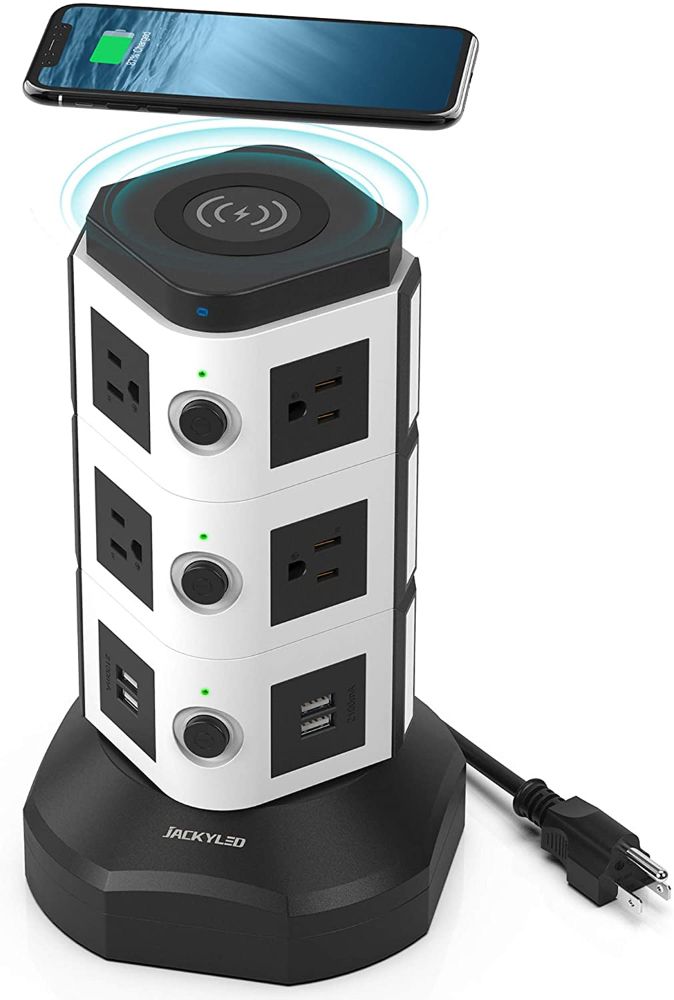 Desk space can be prime real estate during the workday. This JACKYLED charging station helps keep your work laptop plugged in while ensuring you’re able to charge your phone, thanks to its rubberized, anti-slip wireless fast-charging station on the top of this surge protector.

Control which plug-ins have power with the tap of one of the three charging station buttons. You can also retract the cord to keep any excess cordage out of your way while you work. With up to 900 joules of surge protection, you’ll be able to keep your laptops, phones, and other tech equipment safe from overheating or circuit breaking. 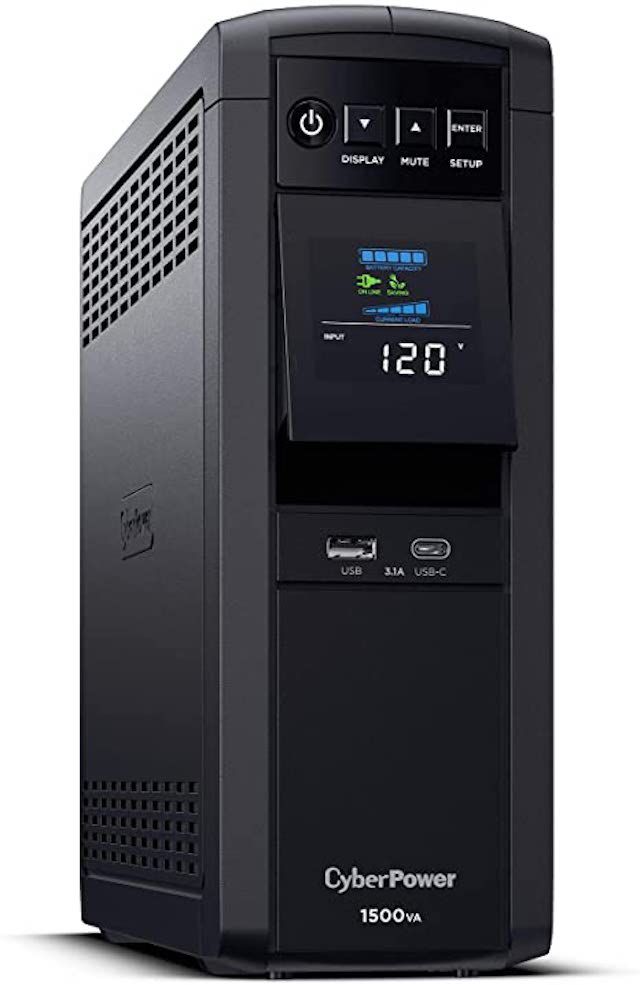 The best splurge for a high-end gaming rig is by far the CyberPower CP1500PFCLCD. Not only does it come with a sleek design, but it protects up to 1445 joules for a higher-end machine. Since this surge protector also moonlights as a UPS system, you can keep your gaming rig safe from any spikes while also safely finish what you started before shutting any PCs down during a power outage.

A multi-function LCD screen will tell you anything you need to know in terms of what’s charging and how much energy it’s taking up. Keep up to 12 various plug-ins safe as well, with two front-facing USB ports that are optimal for charging.

The 8 Best Desktop PCs of 2023 for Work, Gaming, and More
Final Verdict

The APC 1500VA UPS Battery Backup & Surge Protector is by far the best value for the quality. With a crisp, clear LCD screen and ten outlets, your tech equipment will be safe not only from surge protection but also from power failures and spikes. Adjustable voltage is a huge bonus, too. The swappable batteries also make this the best power surge protector on the market.

Rebecca Isaacs is a tech writer who has worked with Lifewire since 2019. She has survived blizzards, derechos, and a plethora of other Midwestern weather-related incidents that have attempted to take away her precious electricity. Thankfully, after years of researching and using various power surge protectors to keep her laptops and TVs safe, she understands the specs on a surge protector and how to choose the best one for a home.

What to Look for in a Surge Protector

Joules - Joules measure how much a protector can take during a power spike. The higher a joules rating, the higher the threshold a protector can withstand. Once the joules reach that threshold, be it one massive spike or a series of smaller spikes, the surge protector isn’t as effective, so higher is better.

Outlets - Will you need to charge your cell phone on this surge protector? If so, it might be in your best interest to look for one with USB ports. Swivel outlets are also important because setting up multiple cords can sometimes be tricky depending on the plug-in’s bulk. For example, a Nintendo Switch charger could take up less space if used on a swivel outlet.