Shop for the top stylus for your iPad or Android tablet

Alex Williams
Alex Williams
Writer
Alex Williams is an experienced tech writer with an interest in wearable technologies. He focuses on everything from gaming headsets to headphones.
lifewire's editorial guidelines
Tablets

The best styluses are ones that are compatible with iPads, Android tablets, and Windows devices. They should also allow you to use your slate for drawing and note-taking. Our top choice is the inexpensive BaseTronics Stylus Pen at Amazon. It's a good introductory option that works with a variety of devices including the iPad, Kindle Touch, and Android tablets.

If you need a device to go along with it, take a look at our list of the best tablets. You're sure to find a good option on a variety of operating systems and price ranges. Read on to see the best styluses below. 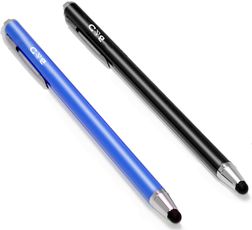 BaseTronics Stylus Pens are inexpensive and a great introductory stylus that's 100 percent compatible with all touch-screen devices, from the Apple iPad 1 and 2, to the iPhone, to the Kindle Touch and Samsung Galaxy.

In addition, the .09 tip stylus is said to work decently with writing programs like Evernote. Of course, with its affordable price, you’re not going to find a neuro-system of feeling in it; its value provides enough to not have you see it as a literal touch-screen-stick that you’d find in even cheaper styluses that could end up turning you off to your investment.

The pen measures 5.5 x 0.3 x 0.3 inches and weighs .3 ounces and is made of stainless steel aluminum with no plastic parts, giving it the feeling of a real pen. The package comes with two pens, and six replaceable soft rubber tips, so you don’t have worry about losing one, but even if you did, there’s a one-year warranty. Colors come in blue and black, but include an option for an 11-piece set with multiple colors ranging from pink to purple. 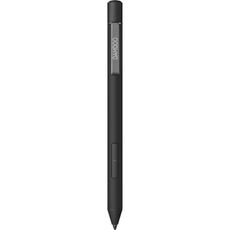 Wacom's Bamboo Ink Plus stylus includes a wide variety of features meant to help make the user experience a simple and pleasant one. For one, its rechargeable battery can take about three hours to fully charge but can last a whopping 10 days even with fairly regular use. It also utilizes a USB-C port to charge rather than the older Bamboo Ink stylus, which makes it a far more convenient option than its predecessor.

Not only will it last longer than before but it now includes tilt support, which, like the Apple Pencil, allows the Bamboo Ink Plus to detect how it's being held and translate placement into onscreen strokes. Its physical casing is meant to mimic that of a regular rubber pencil to make using it feel a bit more natural. Overall, it's an excellent option for devices that support it. You can even juggle between three different types of replaceable nibs to make whatever work you're doing with the Ink Plus feel more comfortable for you. 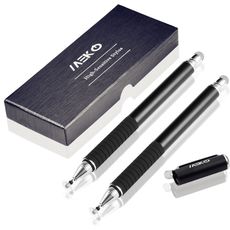 Courtesy of Amazon.com
View On Amazon View On Walmart View On EBay

You’ll find that some styluses have a bulb point that doesn’t make for great note taking. These types of styluses are cheaper in that their design is primarily used for navigation, and not for note taking or drawing. Fortunately, fine-tipped functional styluses don’t have to come with a heavy price tag for their precision functionality.

The MEKO Disc Stylus is a stainless steel aluminum fine-tipped stylus with no plastic parts and is one of the favorite styluses on the market. The unit measures 5.5 x .3 x .3 inches and weighs only 1.6 ounces. The package includes replaceable tip ends: a 6.8mm clear disc point, a 2mm rubber tip and a 6mm fiber tip. The clear disc tip allows the pen-wielder to see exactly where your mark is being made to ensure accuracy. The fiber tips are good for standard web browsing, drawing and overall navigation.

You won’t find compatibility to be an issue, as the MEKO is designed to work with all capacities of touch screen devices such as the Apple iPad, iPhone, iPod, Kindles, Samsung Galaxy and more. Thanks to its compatibility, price and multiple tip functionality, the MEKO is the best precision stylus on a budget. 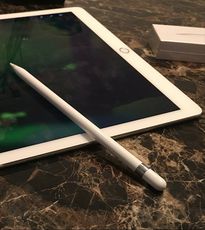 Courtesy of Amazon.com
View On Amazon View On Best Buy View On Apple

What hasn't Apple made? And what’s so appealing about a pencil with their brand on it? For those unfamiliar with the capabilities of styluses, the Apple Pencil presents a broad range of functionalities. If you’re an experienced stylus buyer and want the most bang for your buck, this is the stylus for you (but it's important to note that it's only compatible with the iPad Pro's Multi-Touch subsystem).

The Bluetoooth connected Apple Pencil is smart enough to recognize how hard you're pressing on a surface, as well as your shift in angles. The stylus has built in sensitive pressure and tilt sensors that can recognize the physics of your pen wielding. For those running drawing programs, this stylus can vary line weight, create subtle shading and produce a wide range of artistic effects, replicating that of a conventional pencil. Users have noted that the Apple Pen is great for creative control, and if you’re using Photoshop, it’s ideal for touchups and reworking photos.

The stylus measures 6.92 inches in length, has a diameter of .35 inches and weighs .73 ounces. Despite being the top-of-the-line stylus, it lacks the basic function of an eraser at the end. Users who are in the middle of drawing will have to suffice with tapping two fingers on the iPad Pro’s screen in order to go back and forth between writing and erasing.

This is one of the only styluses on the list that is powered. Plus, it comes with an Apple lightning adapter to charge.

The Microsoft Surface Pen is a very capable stylus for compatible Surface devices including the Surface Laptop 3 and Surface Go 2. The Surface Pen works great with the various devices, offering handwriting recognition and a pressure-sensitive tip for drawing and sketching. It's a nice option for students, graphic designers, and others who need to take notes and draw. At $100, it's one of the more expensive styluses you can buy and it does require an AAA battery, but for the features, it's hard to beat.

The best stylus to get is the BaseTronics Stylus Pen (view on Amazon). It's an inexpensive writing stylus that works with the iPad, iPhone, Kindle Touch, and Android devices. It has a .09 tip that works well with writing programs like Evernote. For a more professional option, we like the Wacom Bamboo Ink Plus (view on Amazon). It has a rechargeable battery, can last 10 days of use, and comes with plenty of features.