Update your Apple device for less

If you’re constantly saving documents, photos, or videos to your MacBook Pro, it’s likely to fill up quickly. Since we all depend on our computers for work, school, and entertainment, expanding your storage space is essential if you want to maximize use of your Mac. If so, a great option to free up room on your hard drive is to add a solid-state drive (SSD). An SSD is a storage device for your computer, similar to a USB— but with much more space.

An SSD is lightweight, fast, and doesn’t draw power from your computer, and they tend to be quieter and lighter than traditional hard disk drives. If you’re in the market for an SSD, look for devices that are known to work well with Macs.

To make things easier, we’ve researched and reviewed the best SSDs for MacBook Pro computers. With devices from top brands, including Samsung, SanDisk, Seagate, and LaCie, there are SSDs for every budget. 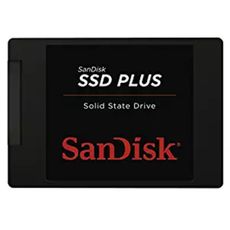 View On Amazon View On B&H Photo Video View On Adorama.com
What We Like
What We Don't Like

If you have an older MacBook Pro and are looking for ways to speed up its operation and gain more storage space, the SanDisk SSD Plus 480GB drive might be what you are looking for. Using the SATA Revision 3.0 interface, this SSD is supported by MacBook Pros made in 2011 or 2012, but if your device was made earlier you still may be able to update your laptop with it as long is uses SATA 1.0 or 2.0. And let's be real: It’s definitely more cost-effective to try to update your MacBook Pro with this SSD instead of upgrading to a new device. It has a capacity of 480GB–plenty of room for all your personal files, photos, and even videos.

Plus, this SSD enables to you save data quickly and retrieve it even more quickly—up to 20 times faster than your old hard drive—thanks to a 535MB/s sequential read speed and a 445MB/s sequential write speed. With cool, quiet operation and a generous battery life, this SanDisk SSD may transform your older MacBook Pro into the device of your dreams.

What Read and Write Speeds Mean in Relation to Data Storage 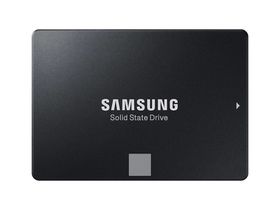 The Samsung 860 EVO 250GB is a budget-friendly option for those looking to speed up operation of their MacBook Pro devices made in 2012 or earlier. It has a SATA 3.0 connection interface and impressive read and write speeds (520 MB/s and 550 MB/s) for dramatically improved device performance. At 250GB, this isn’t the largest SSD on our list, but that’s still plenty of space for the average Mac user, even if you love taking high-definition photos and videos.

Does your laptop take forever to startup? This SSD will change that. Are your apps, games, and other programs sluggish and slow to open? Get a fresh start with this affordable SSD. Even when multitasking, you’ll be impressed by how responsive your MacBook Pro will be. Plus, this SSD is guaranteed to be long-lasting, with an estimated reliability of 1.5 million hours. That’s a lot of computing time–and time you’ll be able to use more effectively thanks to your speedier device.

"The Samsung 860 Evo is a workhorse drive. It'll work great as a fast boot drive to put your OS on and handle some games, though 250GB limits how much you can put on it." — Ajay Kumar, Tech Editor 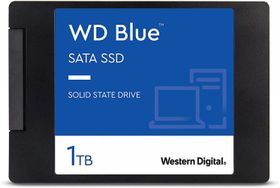 If you never want to run out of storage space again, check out the WD Blue 3D NAND 1TB SSD. This SSD adds a huge 1TB of storage space to your MacBook Pro, enough to save over two million average-sized photos. This SSD is compatible with Macs that have SATA controllers and uses the SATA 6.0 GB/s interface. It also offers very good performance thanks to a sequential read speed of up to 560 MB/s and a sequential write speed up to 530 MB/s. You may also notice improved battery life since this SSD boasts an active power draw up to 25 percent lower than previous generations of SSDs. Plus, the manufacturer offers free downloadable software to monitor the status of your drive as well as a five-year warranty for this SSD, so you can buy confidently knowing you’ve opted for a product with good reliability and a long useful life.

"Western Digital is a reputable brand in the storage space, and the Blue 3D NAND offers a great combination of price and performance. It'll boot fast, handle video and photo editing, and games without much trouble." — Ajay Kumar, Tech Editor 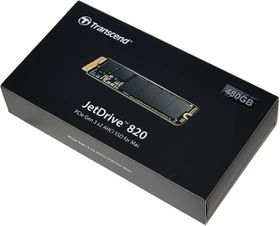 If you have a MacBook Pro made between 2013 and 2016 that could use some upgrades, check out the Transcend 480GB JetDrive. Compatible devices include the MacBook Air, MacBook Pro Retina, Mac Mini and Mac Pro. This SSD uses the advanced PCIe Gen 3 x 2 interface designed to provide speedy data transfer. This JetDrive SSD really lives up to its name; check out the incredible read/write speeds that you can achieve with this SSD – 950MB/s for each thanks to the 3D NAND flash technology that this SSD uses. This SSD also comes with a JetDrive toolbox that makes it very easy to monitor things like the drive's strength and firmware updates. Upgrading your Mac with a Transcend JetDrive 820 allows you to easily increase storage capacity, ensuring you have plenty of space for your documents, photos, music, and videos. 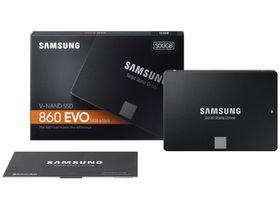 As the newest edition of one of the world's top-selling SATA SSD series, the Samsung 860 EVO is specially designed to enhance the performance of existing laptops like your MacBook Pro. This SSD is compatible with SATA 3 GB/s and SATA 1.5 GB/s interfaces, making it useful for upgrading many aging MacBook Pros. With the latest V-NAND technology, this fast and reliable SSD comes in a wide range of compatible form factors and capacities. It boasts consistent speeds even when multitasking or under heavy workloads. Using the mSATA interface, the 860 EVO performs at sequential read speeds up to 550 MB/s with Samsung’s Intelligent TurboWrite technology, and sequential write speeds up to 520 MB/s for fast file transfers and improved performance. For this version of the EVO SSD, the TurboWrite buffer size has been upgraded from 12 GB to 78 GB. Thanks to the included five-year warranty on each SSD, you can see that the makers are sure about its durability.

"For fast read/write speeds that can handle intensive tasks, including video and photo editing and gaming, the Samsung 860 Evo is one of the best SSDs you can get for its size and price." — Alan Bradley, Tech Editor

G-Technology is not one of the best-known brands on the market, but this SSD is a splurge-worthy option for upgrading your MacBook Pro if you really want to transform your device. It gives you a massive 2TB of storage space, enough for millions of high-definition photos. It’s also a great choice if you are concerned about wear and tear, since this SSD is one of the toughest on the market. The G-Drive Mobile is certified to IP67, meaning it can be submerged in water at a depth of one meter with no ill effects. The G-Technology G-Drive Mobile's impact and tensile strength are better than many comparable SSDs—it’s drop-tested to three meters and can take 1,000 pounds of pressure without breaking. Shor USB-C and USB-A (full-size USB) cables are included, letting you plug the G-Drive Mobile into any MacBook or iMac. As a bonus, the drive also comes ready-formatted just for macOS, making it easier to transfer files from your old hard drive to your new one. 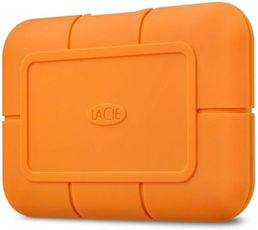 If you’re looking for a durable SSD that can handle working with video or large amounts of photos, look no further than the LaCie Rugged SSD Pro. Available in two sizes, 1TB or 2TB, with a fast data processing speed of up to 2800 MB/s, it’s worth the higher cost.

If you’re frequently working on location or outdoors, the rugged silicone exterior case is essential for keeping your data safe and keeps your SSD from running hot to the touch. It’s dust and water-resistant and can withstand drops from up to nearly 10 feet, with a rating of IP67. Plus, in the vibrant orange hue, it’s hard to misplace. Operating via USB 3.1 or Thunderbolt 3, it’s easily compatible with Macs.

If your aging MacBook is in need of an upgrade to its hard drive or your SSD is too full, there are plenty of options for an upgrade. One of the best for older MacBook users is the SanDisk SSD Plus 480GB. It works with just about any MacBook from 2011 and beyond, and it's one of the most cost effective ways to make your device run faster. If you're on a tight budget, we light the Samsung 860 Evo. It's a workhorse drive that has solid read/write speeds, good software, and is broadly compatible with most MacBooks.

Katie Dundas is a writer and journalist with a passion for technology, particularly in relation to cameras, drones, fitness, and travel. She has written for Business Insider, Travel Trend, Matador Network, and Much Better Adventures.

Ajay Kumar is Tech Editor at Lifewire with over seven years of experience in the industry. He's reviewed everything from HDDs and SSDs, to gaming PCs and laptops. He personally uses a Samsung 860 Evo as an OS drive and the WD Blue 3D NAND as a storage/game drive in the rig he built himself.

Alan Bradley is Tech Editor at Lifewire with over a decade of experience in the industry. Previously published on Rolling Stone, Polygon, and The Escapist, he's reviewed a wide range of products from PC parts to gaming hardware and accessories. He personally uses a Samsung SATA SSD for his gaming rig.

What to Look for When Buying

Storage Size - A key factor to look for in a good SSD is storage. Storage capacity varies according to price, but generally speaking, you'll want a minimum of 250GB of storage for an SSD you plan to use as an OS drive. That means it should be able to handle your operating system, key programs, and a few additional files and games. Larger storage options range from 480GB, 960GB. 1TB, and 2TB, each with a corresponding price increase. For those who have a lot of photos, videos, and games, you'll likely want at least 1TB.

Read/Write Speed - Sequential read/write speed measure the performance of an SSD. The read speed measures how long it takes to open a file, while a write speed measures how long it takes to save something to an SSD. The higher numbers are better. In most cases, affordable SSDs tends to have lower read/write speeds, but they're still fast enough for the average person when it comes to booting and multitasking. If you have a more intensive workflow requiring video and photo editing and rendering, a faster and more expensive SSD can pay off.

Software - Getting all your files over to a new SSD isn't always a simple process. Many SSDs will come pre-partitioned, so a portion of the storage has already been allocated as a backup. They may also come with software (as in the case of Samsung) allowing you to easily copy and transfer files from an old drive to a new one and manage firmware updates.