Get the perfect sound with these smart speakers 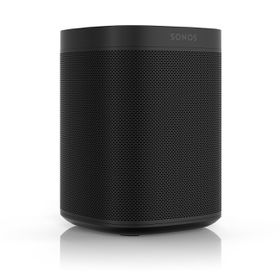 Some wireless smart speakers focus mostly on providing voice assistant functions, while others emphasize audio quality and add voice commands as a bonus — but with the Sonos One, there's no need to choose. The second generation of this product gives you both the smart features and sound quality you'd want, all for a reasonable price.

With both Amazon's Alexa and Google Assistant built-in, the Sonos One offers the flexibility to use either of these leading digital assistants. It's great for picking up voice commands to play music or control smart home devices like your lights or thermostat. The wireless connection takes place through your home’s Wi-Fi network (rather than Bluetooth or any wired connections), and it supports Apple AirPlay 2 connection for iOS devices.

In terms of audio, the Sonos One's two class-D digital amplifiers, one tweeter, and one mid-woofer deliver rich, clear sound with strong bass — a noticeable improvement in quality compared with other dedicated smart speakers at this price and size. At 6.3 x 4.7 x 4.7 inches, four pounds, and available in black or white, the unassuming unit fits in just about anywhere. It's easy to pair two Sonos Ones together for stereo sound, add the speaker to a surround sound system, or make it part of a multi-room audio configuration.

The 8 Best Surround Sound Speakers of 2020

The smart speaker concept also translates well into inexpensive formats. If you're not hoping for booming, crystal-clear sound, you can get the benefits of a voice-controlled, digital assistant at an affordable price with the Google Home Mini. Less than four inches, the tiny pod makes the Google Assistant available anywhere in your home, allowing you to ask a quick question, get a weather update, set a timer, or call out smart-home commands.

Available in charcoal, chalk, aqua, and coral colors, the Home Mini offers a simple design. Four gentle LED dots light up on top as status indicators, and you can tap on the sides to control the volume. Its sound output is decent enough for the size, but connecting it wirelessly to a bigger, better speaker is ideal if you're concerned about audio quality.

You might say Alexa was the original household name for smart home assistants, and the Amazon Echo was the smart speaker that gave it form. Now in its second generation, the Echo continues to be one of the most popular smart speakers on the market, and Alexa is still one of the most trusted virtual assistants. Alexa's thousands and thousands of available “skills” give you hands-free access to all sorts of convenient functions, usually specific to third-party apps and services — from getting news to ordering a ride to playing trivia games. Amazon Prime subscribers can also take advantage of having access to Amazon's vast collection of media, which includes a nice selection of free music.

Just under six inches tall, the Echo isn't a powerhouse speaker meant to blow anyone away with audio quality, but it can still get fairly loud. The cylinder is topped with a distinct glowing blue ring, and decorative shells are available if you want to customize the exterior with a different fabric or finish to match your home. Although there's a variety of Echo devices available on Amazon, this smart speaker is still one of the most useful, affordable ways to bring Alexa to life.

Harnessing the power of Google AI, Google Assistant is one of the most popular and effective voice assistants on the market today. You can ask questions in a fluid and natural way and get helpful, coherent responses. And it doesn't hurt to have access to the entire knowledge base of the internet, thanks to the Google search engine.

Even though you can use Google Assistant on Android phones and other devices, Google Home Max is the speaker to get if you're serious about how your music sounds. Compared to other Google Home products (and to most smart speakers in general), the Home Max puts an emphasis on audio quality that's easy to hear. Within the clean, simple exterior are dual 4.5-inch woofers and dual 0.7-inch tweeters working together to produce big, room-filling, bass-heavy sound. It's further enhanced by a Smart Sound feature that uses machine learning technology to set equalizer settings based on the acoustics of the room and the speaker's placement.

You can set up the Google Home Max to stream from YouTube Music, Spotify, Pandora, and other services. And with Wi-Fi, Bluetooth, and wired auxiliary connection options, you have a lot of flexibility in your audio sources. 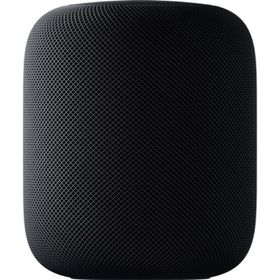 Siri has been a familiar presence on iPhones for a long time, and you can bring Apple's digital assistant into your homes with the HomePod. While the device doesn't quite match the voice-assisted functions of its competitors, it easily makes a case for being the best-sounding smart speaker. Its impressive seven tweeters and one subwoofer produce crisp, detailed, and powerful sound, rich in bass but overall very balanced. Six microphones and advanced processing allow the speaker to dynamically adjust to your room's acoustics, as well as to help Siri hear commands over loud music.

With superior audio quality and the ability to connect with iPhones, iPads, and Mac computers through Apple AirPlay, the HomePod is an ideal choice for Apple devotees. Unlike Alexa or Google Assistant, however, Apple's digital assistant lacks a selection of third-party skills. Siri can only play songs from Apple Music, and it can't access Spotify, Pandora, or other internet radio through voice control, but you can stream them from your iOS device through AirPlay. You also get smart-home control for any Apple HomeKit-enabled smart devices. 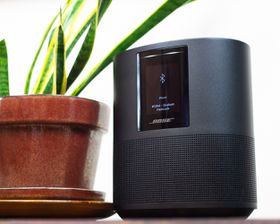 4.3
Buy on Amazon Buy on Best Buy Buy on bose.com

Bose audio products are widely trusted for their quality and reliability, and the Home Speaker 500 fits right in line with its reputation. The premium-priced device touts “wall-to-wall stereo sound,” with a pair of drivers aimed in opposite directions. It's not exactly the same as two separate stereo speakers, but it does create a wide sound profile with balanced highs and lows that fills up a room nicely.

The Home Speaker 500 benefits from both Alexa and Google Assistant, and a sensitive eight-microphone array picks up voice commands effectively — even from across a room. In addition to its digital assistant's features, the smart speaker also supports wireless connections via Wi-Fi, Bluetooth, and Apple AirPlay 2, along with a wired 35mm audio input.

With an elegant design, the speaker has options in black or silver. It's also not quite as minimal as other smart speakers, with the inclusion of a small color LCD screen to display info and album art for the current song you're playing.

4
Buy on Amazon Buy on Best Buy Buy on sonos.com

Upgrading your TV's audio with a new speaker is a smart choice, and upgrading to the Sonos Beam soundbar is the way to go. With it, you can control your TV — and streaming music services, smart home products, and much more — completely hands-free with built-in Google Assistant or Amazon Alexa, as well as Siri through Apple AirPlay 2. Besides the wireless connectivity, there is an Ethernet port and HDMI with an Audio Return Channel (ARC) for sending TV audio back to the speaker. You can also take advantage of the brand's great multi-room audio system capabilities if you have other Sonos devices.

At 25.6 x 4 x 2.7 inches, the Beam is noticeably compact for a soundbar and can easily fit under most TVs or mount on a wall. (Sonos also makes non-voice controlled soundbars that are larger and pricier.) Despite the small size, you get powerful, high-quality sound whether you're watching TV or listening to music on its own. The Beam is loaded with a center tweeter, four full-range woofers for mids and lows, and three passive radiators to move air and improve the bass sound. A Speech Enhancement feature makes spoken dialogue easier to hear, and Night Mode tones down sounds that could wake the rest of your house. 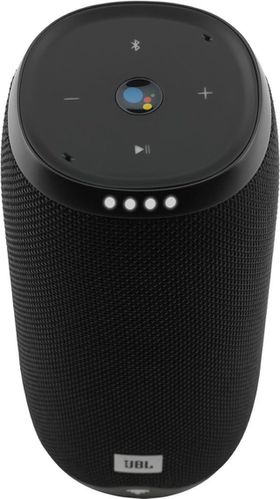 You can find other basic smart speakers in smaller sizes, and ones higher in sound quality that are less portable, but JBL's Link 20 manages an admirable blend of portability, quality, and value for the money. The wireless speaker, equipped with Google Assistant, takes the form of a thin cylinder just over eight inches tall and at about two pounds. A solid 10 hours of battery life means you can get a lot of mileage out of it, whether you're indoors or outdoors. It even has an IPX7 waterproof rating that ensures it can survive being submerged in water up to three feet deep for 30 minutes. So, you can set it next to your bathtub, kitchen sink, or swimming pool with peace of mind.

The Link 20 can give you a lot of music-playing options and overall convenience through Google Assistant, but it also has Chromecast built-in for easy streaming from mobile devices. It plays well with other Google Home or Chromecast devices, and it can connect over Bluetooth or Wi-Fi on both the 2.4GHz and 5GHz bands.