The 7 Best Rugged Smartphones of 2022

These devices are sure to hold up under the toughest conditions

Adam S. Doud
Writer
Adam has been writing about mobile technology since 2011. He is the former host of the Android Authority podcast, and his work has appeared in numerous publications.
lifewire's editorial guidelines
Phones & Accessories

Smartphones today are great and very pretty, but sometimes you need something that can handle a lot. Whether you're active outside or work in an environment that isn't phone friendly, durability is an important factor to take into account when buying a new smartphone. Some traits to look for include Gorilla Glass, an IP rating for water and dust resistance, and build materials. A glass sandwich won't hold up as well as a rubberized plastic phone.

Still, we're at a point where smartphones can be tough and pretty. We have a few examples of those as well. So if you're going to hit the trail, or build a skyscraper, we've got a phone here for you.

Arguably, the best looking phone of the bunch is the LG V60 ThinQ 5G. This is the only true flagship-level phone in the list and it boasts the specifications to prove it. You've got a Snapdragon 865 processor, 5G capability, a great triple camera system including a 64 megapixel main sensor, 8K video recording, and a 5,000 mAh battery. Maybe a 6.8-inch OLED display isn't big enough for you? Then you can pick up the optional dual-screen case which gives your phone a second screen for amazing productivity.

The LG V60 isn't just a pretty face though. Underneath that pretty exterior is a phone that's built tough, including MIL-STD 810G specification and IP68 water and dust resistance. Keep in mind that toughness does not extend to the dual-screen case, so if you're heading outdoors, leave the second screen at home. This phone is a glass sandwich with Gorilla Glass 5 on the front and Gorilla Glass 6 on the back, so it might not look as tough as it is, but LG builds phones to last, and this is a true flagship level phone capable of doing any heavy lifting you throw at it. Gaming, video production, and more are at your fingertips with this powerhouse. 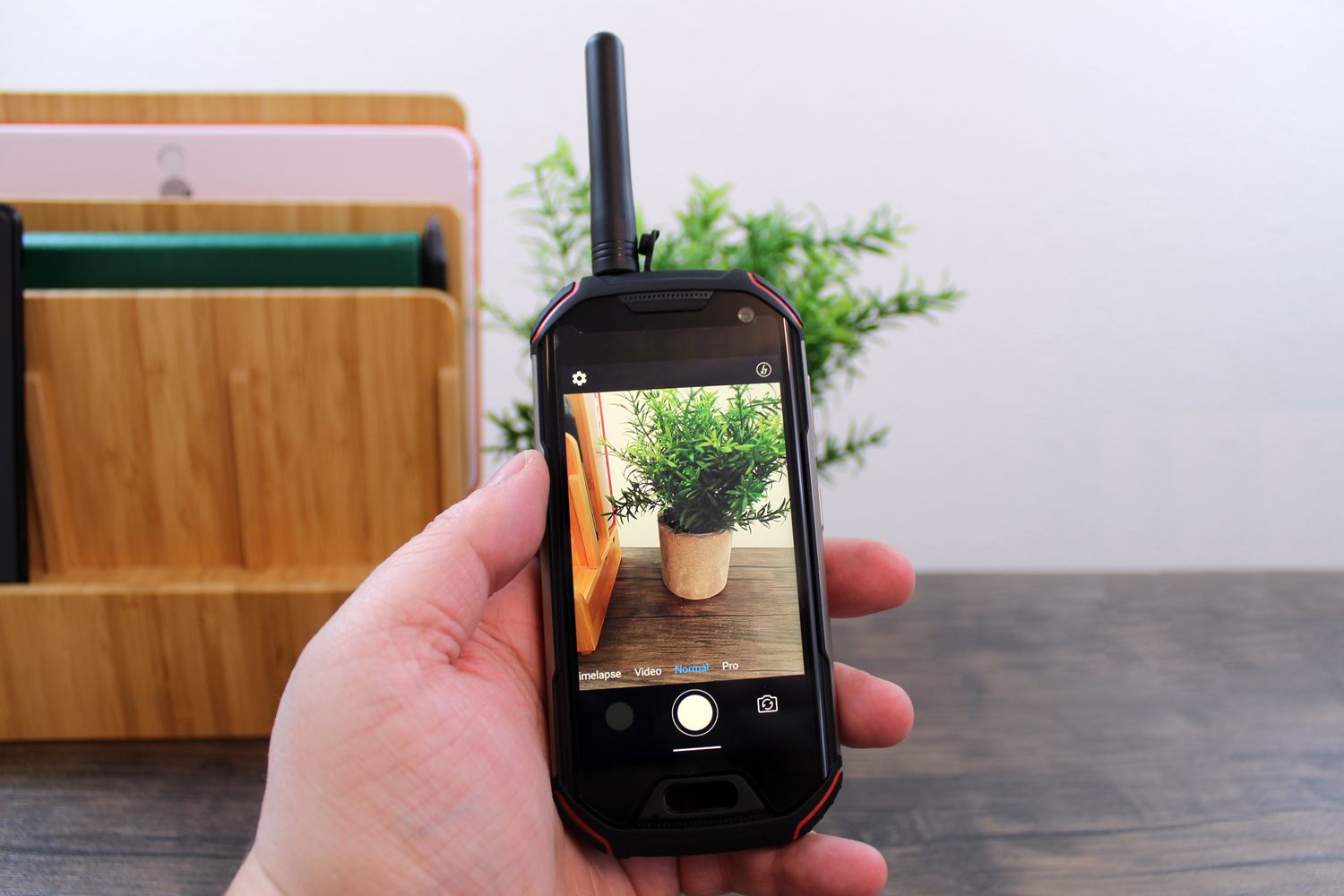 View On Amazon View On Aliexpress.com
What We Like
What We Don't Like
Unihertz Atom XL Review

This smartphone is packed full of surprises. In addition to being built tough, which we'll get to, this phone has accessories that make it that much more exciting, especially if you're an outdoors type of person. For starters, the 48-megapixel camera, 6GB of RAM and 128GB of on board storage are all fairly respectable. The Helio P60 processor and four-inch screen are not the greatest by today's standards, but still enough to get everyday tasks done. Plus, the XL version of this phone comes with a removable antenna which allows you to turn your smartphone into a walkie-talkie.

You can tell this phone is durable just by looking at it. You'll first notice the rubberized grip around the top, bottom, and back. Add to that the grippy backplate and aluminum side rails, and this is definitely a phone you can carry in your nail apron. The exposed screw heads just add to the air of toughness that surrounds this bad boy. 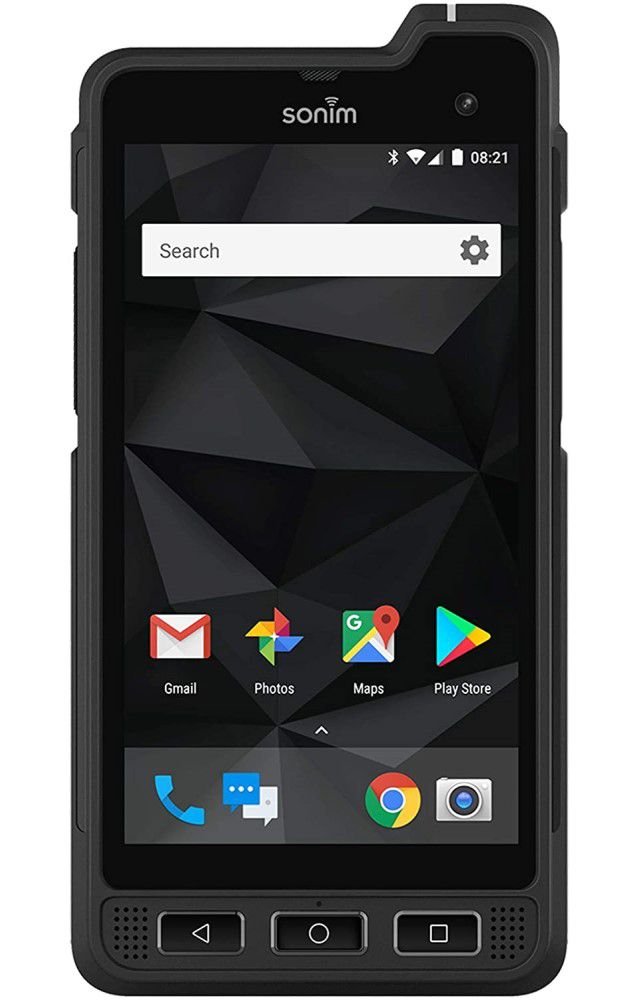 
Of course, when you're a first responder you need a phone that is tough because you never know what situation you'll find yourself in. Sonim made the XP8 with those people in mind. It's one of the only phones that can connect to the United States's dedicated public safety network. It also includes programmable buttons for times when you're using your phone with a gloved or wet hand. Front-firing speakers make this phone very loud so it can be used under almost any conditions.

The phone has both IP68 and IP69 dust and water resistance. The entire phone is covered in a shell of rubber and plastic which keeps it safe from drops and scrapes. The 5-inch screen is only covered in Gorilla Glass 3, but the whole phone is just a beast. Outside buttons are tough, including physical navigation multitasking and home buttons across the bottom in between the speaker grills. 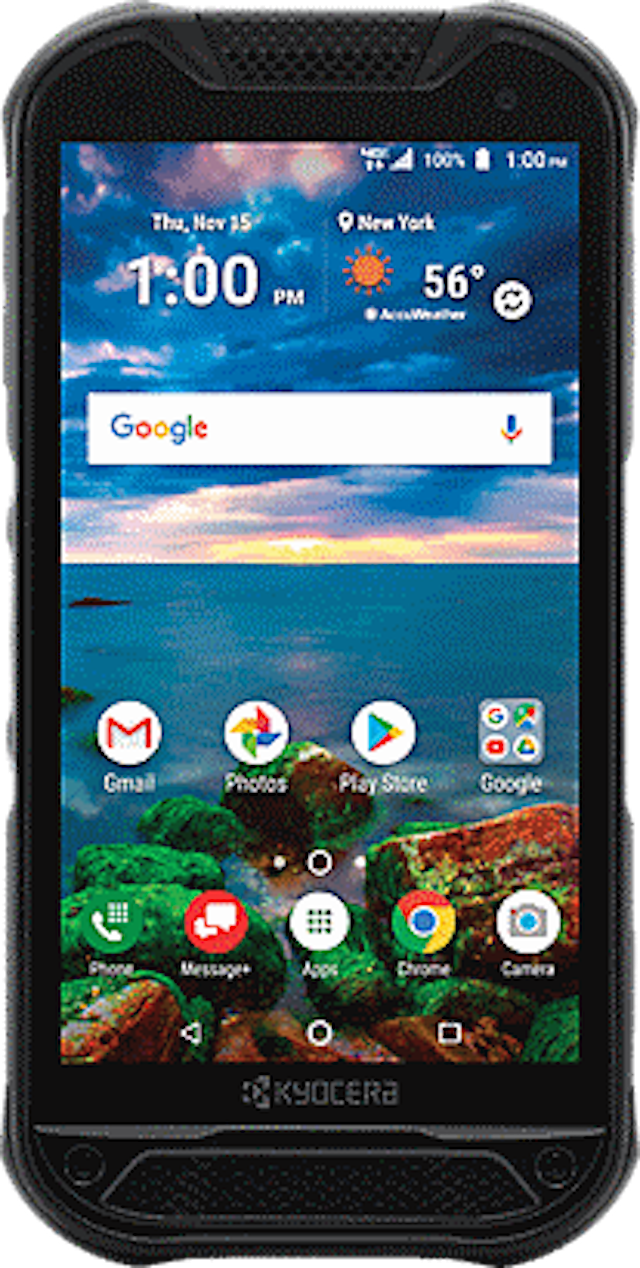 View On Amazon View On Verizonwireless.com
What We Like

Kyocera is a name that goes back a long way in cell phones, especially when it comes to durability. The DuraForce Pro 2 is no exception, falling into "ultra-rugged" territory. It's also waterproof. It has a Snapdragon 630 processor, a 13-megapixel camera, and a 5-inch display under sapphire glass. The thick rubberized body is easy to hold and makes the phone quite chunky, but it carries with MIL-STD 810G standard rating which makes it a force to be reckoned with.

What's more, the phone comes with a delightful bevy of extras including Qi wireless charging which is almost unheard of at this price point. Add to that premium noise cancellation, and dual front facing speakers, and this is a durable phone with some nice surprises. Make no mistake that this phone stands up to the durability and force implied by its name. 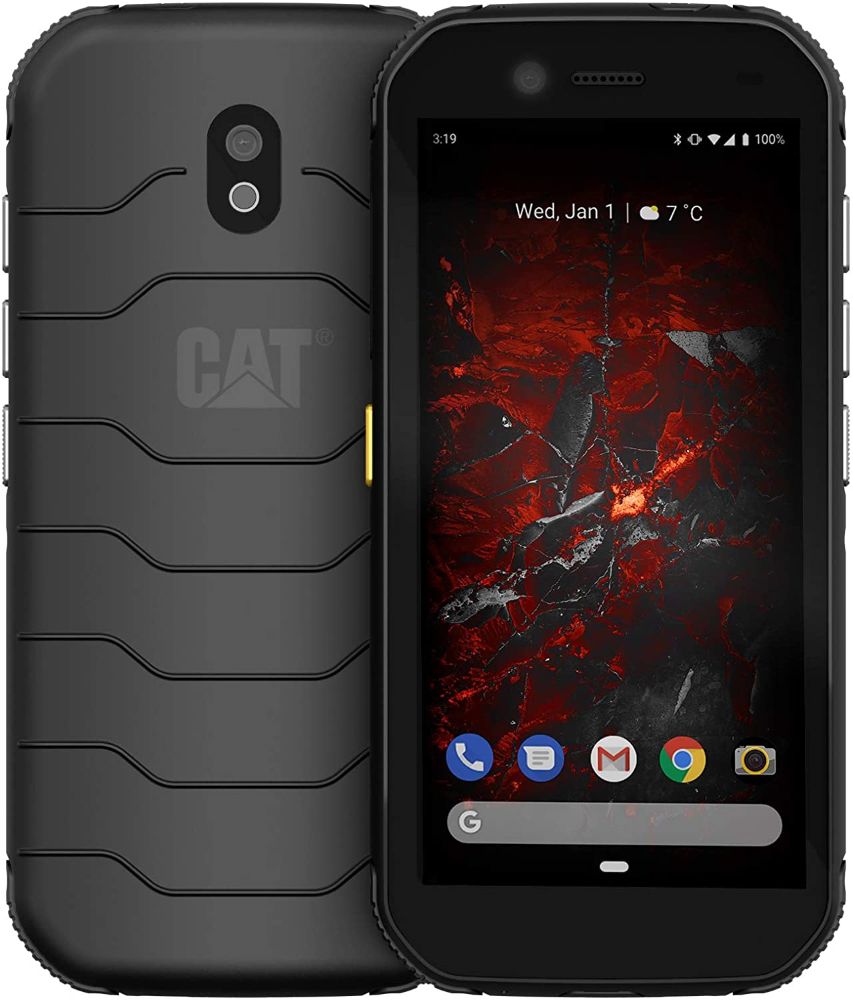 View On Amazon View On B&H Photo Video View On Catphones.com
What We Like
What We Don't Like
CAT S42 Rugged Phone Review

The CAT S42 is an impressively rugged phone, packing a bulky, hearty plastic exterior with covered ports as well as enhanced water, drop, and thermal shock resistance. It’s so well-protected, in fact, that CAT advertises it as a phone you can simply wash with soap and water.


On the other hand, the CAT S42 features entry-level components akin to those of a much cheaper budget phone, which means it delivers sluggish performance, has a low-quality screen, and only takes decent photos in strong lighting conditions. It’s usable, however, and the battery can provide two days of solid usage. Still, given the $300 price, the CAT S42 is only really ideal for those who require such extreme protection. Otherwise, you’re better off buying a more powerful phone for around the same price and snagging a durable case for it.

"It’s built to last: with modest use, you should be able to stretch the CAT S42 out across two full days (morning to bedtime) on a single charge, or potentially more." — Andrew Hayward, Product Tester 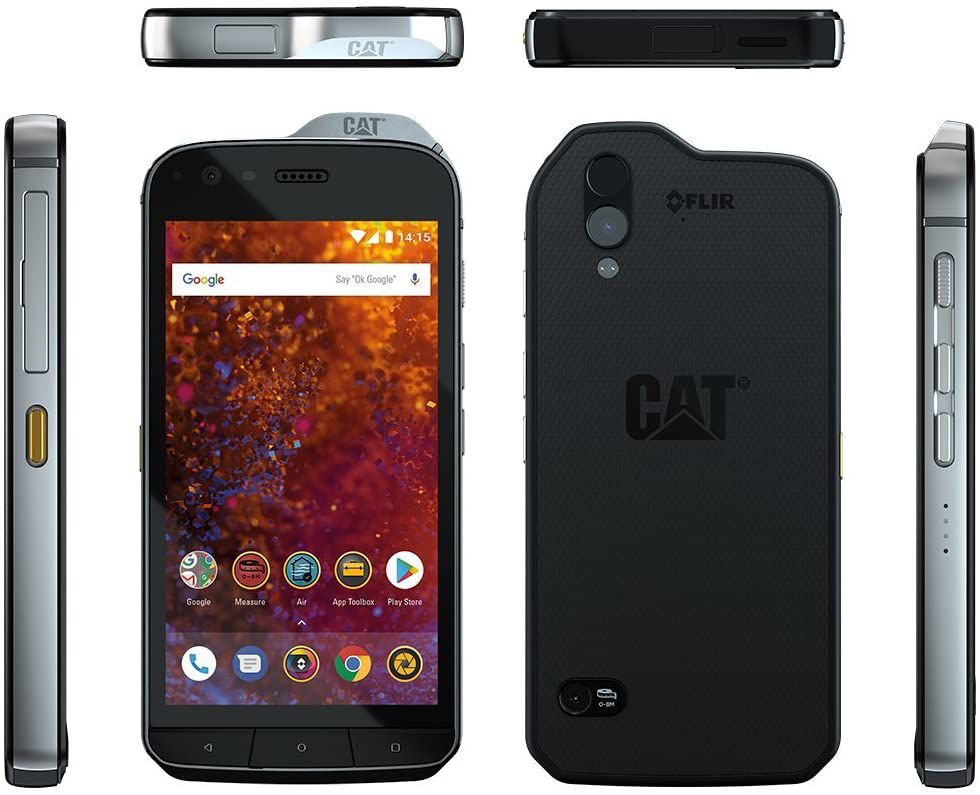 CAT is not done in this category though because the S61 has a boatload of surprises packed in as well. We call this the best phone for construction because it is built tough. In addition to IP68 water resistance and Mil-SPEC 810G standards, this phone sports metal rails on each side and a grippy rubberized back as well. But the CAT S61 is not done! Because a construction phone needs to be handy around a construction site, this phone comes equipped with laser distance measurement, a FLIR thermal camera, and an air quality sensor and monitor. Not only will this phone keep you safe, it will help with your work as well.

Under the hood, you have a Snapdragon 630 processor, 64 GB of on board storage, 4 GB of RAM and a 4,500 mAh battery with Quick Charge 4. That's a lot of power in this 5.2-inch little package. Unfortunately, unlike its counterpart on the list, this phone ships with Android Oreo, which is older, but still a good operating system. The extra sensors and tools are nice, but if you're worried about security, an older operating system is no good.

If smartphones aren't your taste, we have a flip phone entry on this list as well. Flip phones by their very nature tend to be more durable because they close over the most delicate part - the screen. The Samsung Rugby III has a small exterior display which is great for time or notifications, and inside this phone is no slouch. You still get Bluetooth, push to talk, a MicroSD slot for expandable storage, and even GPS navigation.

Plus, it's waterproof and conforms with military specifications for durability. It's a tank with rubberized sides all around and a nice soft touch grippy backplate that makes the phone great to hold and use. It has a camera, so it's basically all the important parts of a smartphone and it closes shut when you're on the job.

It's hard not to choose the LG V60 as the top choice in this category because in addition to LG's toughness, this phone also looks great. It's considered a flagship phone just like any other phone by Samsung and Apple, but it's much tougher. The second screen case isn't for everyone which is why it's optional.

However, if you want a real workhorse, the Cat S42 is a strong option as well. While its older sibling, the S61 has a lot of extras, the software upgrade coming to the S42 is hard to overlook. Not everyone needs FLIR cameras, but security updates can make or break a phone in the long run.

Adam Doud has been writing and podcasting about mobile technology since 2013. He's used every major phone platform since then including some that are no longer around any more. When he's not obsessing over the latest smartphone to come from Apple, LG, Samsung, and others, he can be found behind the microphone on his podcast, the Benefit of the Doud.

Andrew Hayward is a Chicago-based writer and reviewer who's been covering technology and games since 2006. He's previously been published in TechRadar, Stuff, Polygon, and Macworld. Over the course of his career he's covered hundreds of gadgets, including smartphones, wearables, smart home devices, video games, and more.