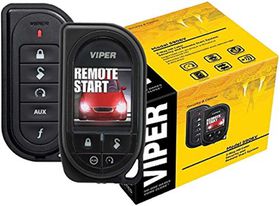 Buy on Amazon Buy on pcrichard.com

If it's an aftermarket system you're after with excellent reviews and a range of up to one mile, look no further than the Viper 5906V. Featuring two different remote options, the two-way primary remote adds a 20 percent larger touchscreen OLED display over previous generation models, while the second remote includes five button controls for all essential functions such as locking and unlocking doors.

The inclusion of additional security sensors provides an extra level of support to help prevent tampering or theft. Beyond security, a mini-charging port on each remote requires 60 minutes of juicing time once every six months.

Viper's SuperCode technology provides users an option to use the 5906V system on up to two cars with a single remote, while also including the option to add their SmartStart module to pair and operate the system directly from your smartphone.

The Avital 4105L offers a great combination of features at a price that's definitely wallet friendly. Available with two compact one-way remotes, the four available buttons include the ability to start the engine and release the trunk, as well as lock and unlock the doors. Keyless entry is available for easy vehicle access, while the remote engine start works at a fairly lengthy distance of 1,500 feet away.

To save gas, the Avital allows for easy programming to determine how long the vehicle will run before the key is inserted. Beyond range, the Avital offers a good enough level of security by preventing attempted hot-wiring by thieves with a system called Fault-proof starter interrupt that includes the ability to detect false alarms.

Buy on Amazon Buy on Walmart Buy on sears.com

The 4806P can work from nearly 5,280 feet away even without a direct line of sight. The dual five button remotes include lock and unlock door buttons, auxiliary buttons, as well as remote engine start in both two-way and one-way button outputs. The biggest perk of the 4806P is compatibility with the company's downloadable smartphone app, so long as you have the separately purchased DSM 200 or DSM250 SmartStart module added to the car. The inclusion of additional technology allows trunk release, a panic mode or car finder, as well as locking and unlocking doors directly from a smartphone. Multiple family members can even take advantage of these features on multiple smartphones if there's more than one driver for each car.

Compustar's CS800-S one-way remote start engine system is compatible with diesel engines. As diesel engines function very differently than the more traditional gas-powered engine, this is a feature that shouldn't be ignored. With two included one-way remote start systems with keyless entry, the four-button transmitters can operate from a range of up to 1,000 feet away from a vehicle. Holding down the remote start for 2.5 seconds will engage the engine as well as enable either warm or cool air to start pumping out depending on which has been set before exiting the vehicle. An additional trunk release button is available, as are locking and unlocking buttons for doors. User reviews peg the Compustar as one of the easiest systems to install if you have basic car knowledge, while a separately-purchased accessory can add smartphone control and GPS tracking.

If you're willing to splurge on the price, the Compustar Pro T11 three-mile range and feature set make it a standout choice in a busy field. The advancements of this system allow for notable extras right, including two touchscreen LCD display remotes that are IPX7 certified for waterproofing. USB-rechargeable, the remotes still feature all the basics, including remote engine start, trunk release, locking and unlocking doors, plus the ability to control heated seats, front and rear window defrosters, windows operation and GPS engagement. The car starter features visual and audible confirmation each time a command is sent to the car. It comes with a three-year manufacturer backed warranty. 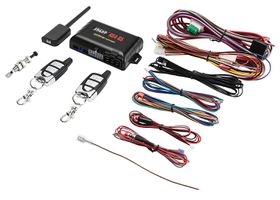 Compatible with both manual and automatic transmissions, the Crimestopper RS4-G5 remote start system is an ideal choice for drivers of both types of vehicles. Featuring an operating range of up to 2,000 feet, the biggest highlight of the Crimestopper isn't its compatibility with different transmissions but its incredible 31 different programmable option types. It has two identical five-button remote controls for locking and unlocking, remote start, and opening the trunk but it's the fifth button that grabs the most attention. The programmable options allow users to program engine monitoring, hybrid modes or even tachometer features, all with the press of a button. While the Crimestopper only adds a basic set of security features, it does offer multi-vehicle operation for controlling up to two different vehicle remote starts with a single remote.

Packed with top-notch features, the biggest highlight of the Python 5706P remote start is the security system that adds huge peace of mind for car buyers everywhere. Featuring a six-stage alarm system and a warning alarm, the car can be monitored directly from the two-way LED and non-LED remote controls at a range of up to one mile. The system is praised by users for triggering even the slightest of movements while the system itself is smart enough to differentiate between light and heavy impacts, producing warning chirps for the former and louder alarms for the latter.

For even more security, the Python tacks on a starter-kill system which will prevent the engine from turning over unless a key is inserted into the ignition. Beyond security, the remote controls add functionality for keyless entry, trunk release, panic mode and car finder mode for quickly finding your lost car in a parking lot.