The 7 Best Rechargeable Battery Chargers of 2021

Rejuice your batteries in no time

The Rundown
Best Overall:
Panasonic Eneloop Quick Charger at Amazon
Provides a 'rapid charge' that fills one or two batteries in 1.5 hours or a full set of four in three hours.
Best Budget:
AmazonBasics Battery Charger at Amazon
Offers a USB output as a bonus feature to charge phones and other devices.
Best Speed:
MiBoxer C4-12 Smart Charger at Aliexpress.com
It can deliver a very fast 3 A charging current on each of the four independent slots.
Best Features:
Nitecore SC4 Superb Charger at B&H Photo Video
Can show info on each battery ranging from its condition to its charge level to internal resistance and more.
Best for Bulk Charging:
Bonai 18 Bay Smart Rechargeable at Sears.com
Offers a charger for 16 AA or AAA batteries of any brand, plus two slots for 9V batteries.
Best Design:
Powerowl Rechargeable Battery Charger at Amazon
The 7.8-inch diameter and one-inch height makes it easy to carry around and find a place for.
Best Quality:
Energizer Recharge Pro at Amazon
The Energizer Recharge Pro is a high-quality charger with overcharge protection and safety features.

The best rechargeable battery charger should be able to charge fast and handle lots of batteries at the same time. Rechargeable batteries are particularly handy for things like remotes, smoke alarms, controllers, and other devices that drain fast and go through lots of batteries. Our top pick in the category is the Panasonic Eneloop Individual Battery Quick Charger. It provides a rapid charge that can top up one or two batteries in 1.5 hours or a set of four in 3 hours.

For most consumers, a reliable, cost-effective battery charger without extra complicated features is enough for the job, and the Panasonic Eneloop Quick Charger is among the best. The BQ-CC55 charger model provides a “rapid charge” that fills one or two batteries in 1.5 hours or a full set of four in three hours, and its smart charging feature lets you rapid charge without hurting battery life in any significant way. You can charge any combination or number of AA or AAA batteries. A handy strip of colored LED lights turn red, yellow, or green to indicate the charge level of each battery, and they flash yellow or red for batteries near or at the end of their lifespan.

You can opt for a bundle that includes four AA or AAA Eneloop batteries, which make a nice starter set if you don’t already have your own. The Eneloop brand is a trusted name in “low self-discharge” batteries, meaning they’ll keep 85 percent of their charge for a year and 70 percent after five years. There are bundles with Eneloop “Pro” batteries that have higher capacities, but unless you really need longer sessions between charges, your money may be better spent on additional standard-capacity batteries. 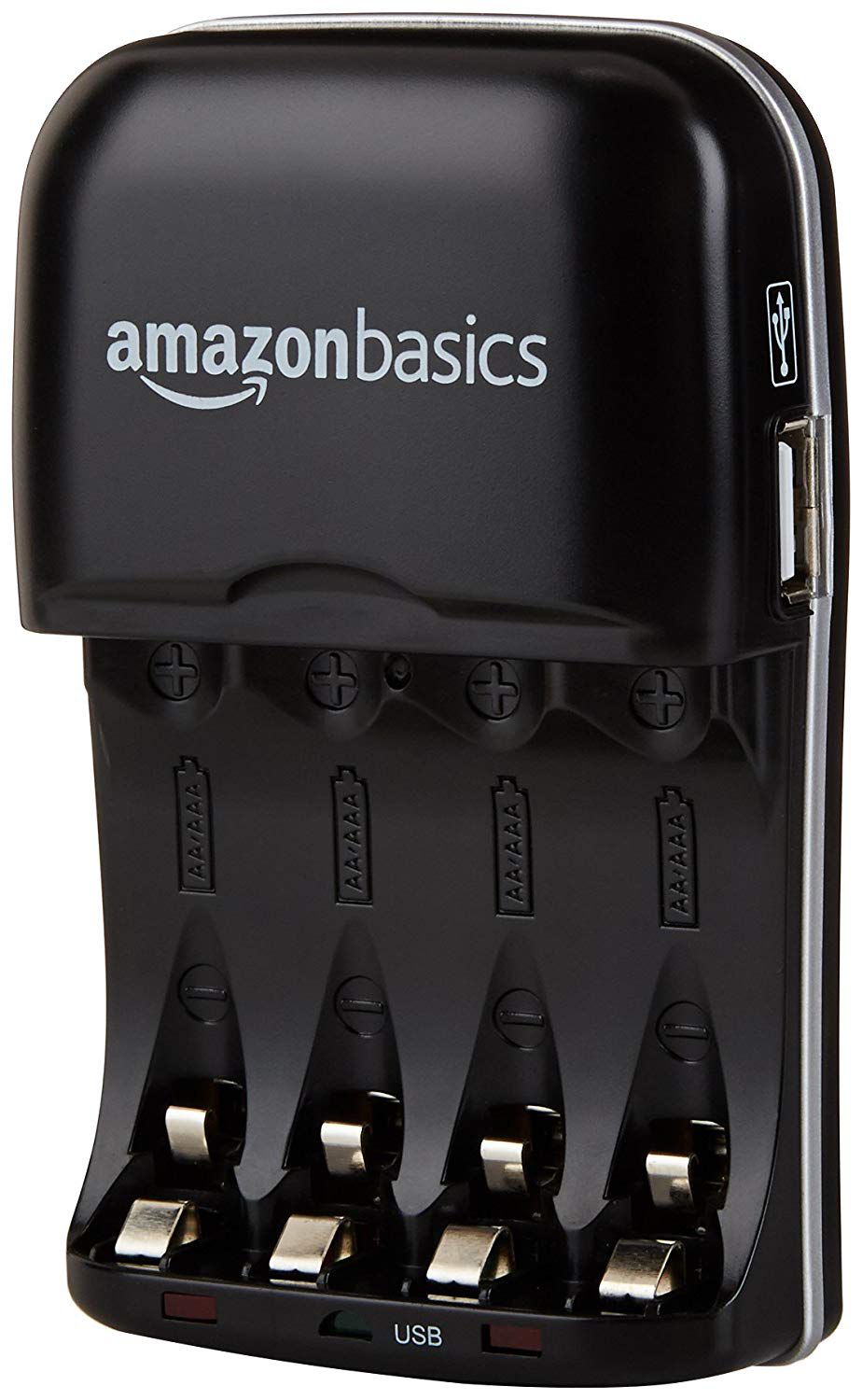 If you’re in the market for frill-free recharging, Amazon offers its own affordable 4-slot charger for any Ni-MH AA or AAA rechargeable batteries. Not all products at the price level offer true “smart charging,” but the AmazonBasics charger does cut off the charge when cells are full. It also charges relatively quickly — depending on capacity, charge times are estimated at between 3 to 4.5 hours for AAs and 2 to 3.5 hours for AAAs.

Like most budget chargers, this one requires you to charge batteries in matching pairs, as in two AAs, two AAAs, four of either, or two of each. This can be limiting if you need one or three batteries charged, and it has some negative effect on battery life since two batteries won’t usually be at the exact same charge level, leading to one getting overcharged. The charger also offers a USB output as a bonus feature to charge phones and other devices. USB charging takes priority over battery charging, though, so you can’t do both at the same time, and you can’t unplug the charger from the wall and have your batteries function as a power bank. 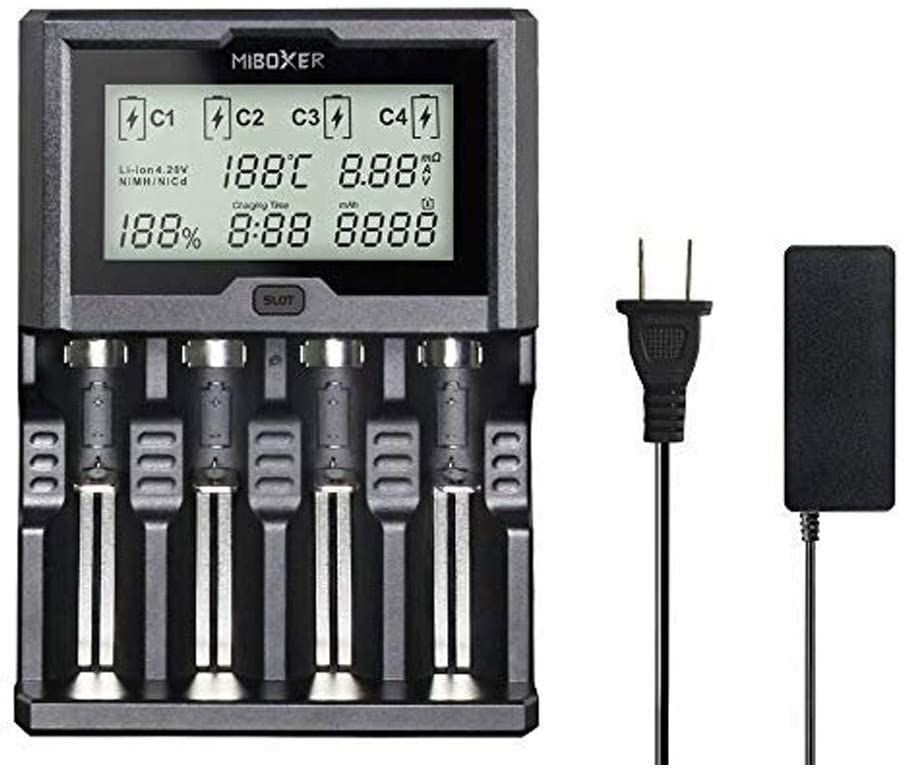 View On Aliexpress.com View On Banggood.com

Compatible with a wide selection of Ni-MH, Ni-Cd, and Li-ion batteries, the MiBoxer C4-12 can simply and safely charge basically any battery type you’d want. Like other premium chargers, it can also provide more powerful performance and advanced battery analyzing functions — but there are important elements it handles better than others. It can deliver a very fast 3 A charging current on each of the four independent slots, for up to 12 A total. That comes to about an hour to fully charge four 2000-mAh capacity cells. The device will automatically choose an appropriate current for the type of battery and its capacity, but you can also manually select the speed for each slot. It doesn’t discharge batteries, though, so you’ll have to discharge them manually for more complete analysis.

The MiBoxer C4-12’s display may not look fancy, but it detects and provides a rich array of information in a very clear, easy-to-digest way. The charger’s one button cycles through which slot to display data from. You can then see the battery type, temperature, internal resistance, charge percentage, charge time remaining, and even more info for the battery in that slot, all on the screen at once. The charger can also serve as a 5-volt USB power bank if it's powered by a Li-ion battery in the 4th slot.

The 4 Best Portable Chargers and Power Banks of 2021 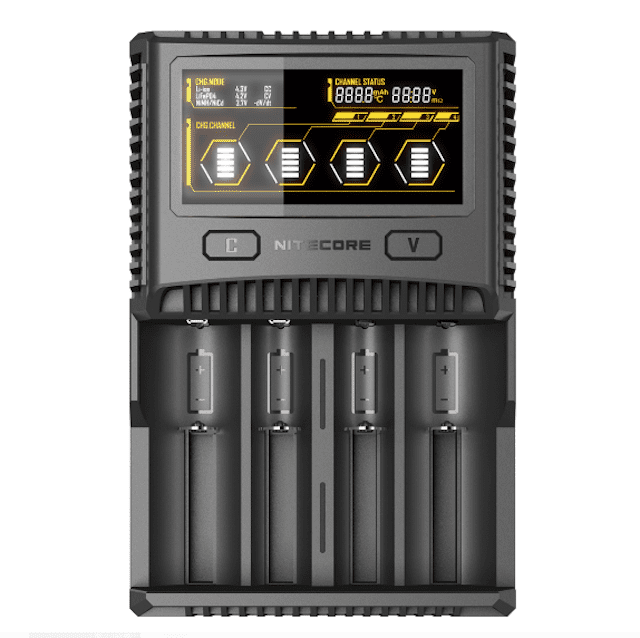 Nitecore produces a wide range of quality battery chargers for many different needs, and the SC4 Superb Charger is designed to offer premium performance and flexibility. Its four slots support almost any type or size of battery. Put one in and the SC4 will identify and start charging at an optimal default current. But you can also manually select the charge current for each slot independently, anywhere from 300 to 3000 mA (3 A). The speedy 3 A rate is the limit for a single slot, with a max total output of 6 A (no discharge is supported). Some users reported the actual charge being less than display shows, but it still offers one of the fastest charges around.

The display, in general, is noticeably above and beyond what most chargers offer. The LCD screen uses advanced Multi-domain Vertical Alignment (MVA) technology to provide a crisp, colored display with 160-degree viewing angles. It can show info on each battery ranging from its condition to its charge level to internal resistance and more. There’s also a USB output that lets the SC4 deliver power to other devices when not charging batteries. 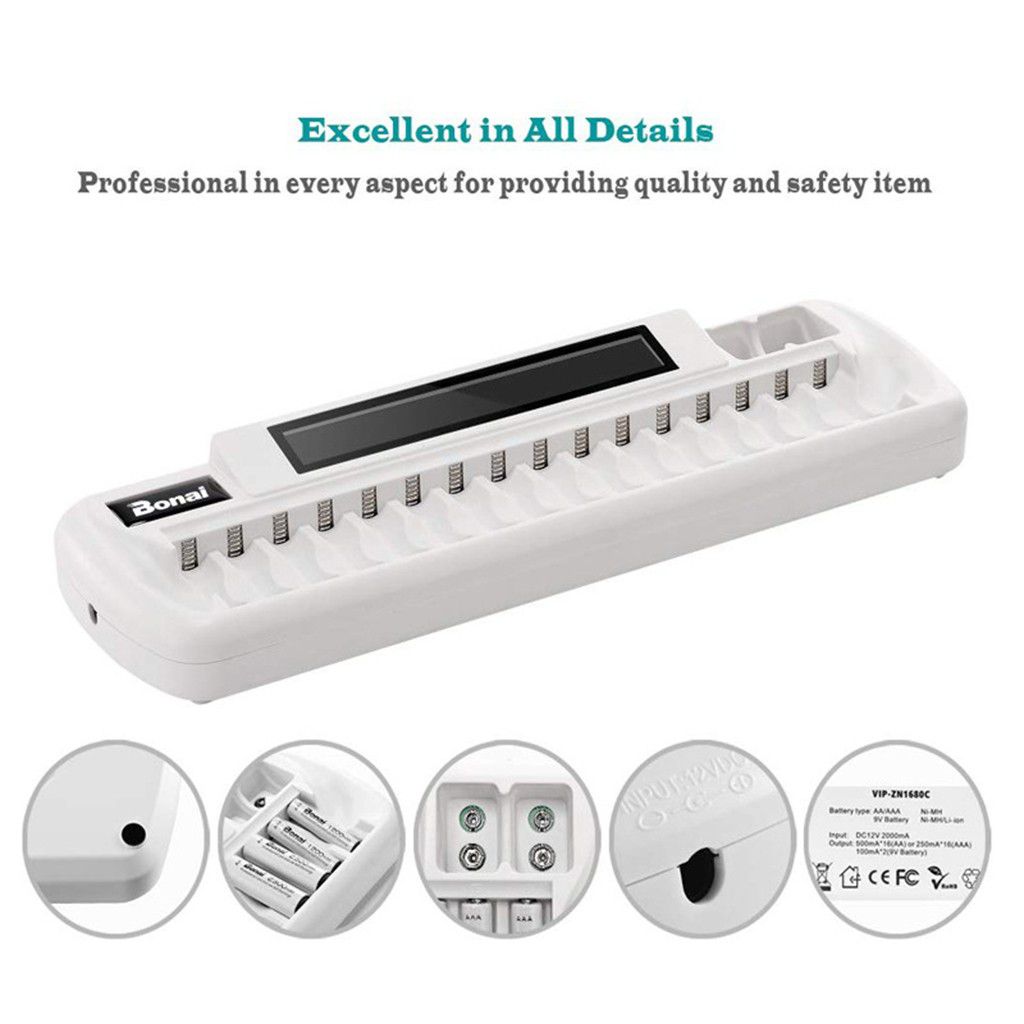 Each of the 18 bays can charge a single battery individually, and the charge status of each is displayed on the wide, bright LCD screen. The device’s smart features protect against overcharging, overheating, and defective or non-rechargeable batteries. Typical charge times are listed as four to six hours for 1 to 16 AAs, or 1.5 to 3 hours for 1 to 16 AAAs. There’s no discharge function to refresh your batteries, but for high-quantity charging sessions, the Bonai 18 Bay charger has room to spare.

The 6 Best AA and AAA Rechargeable Batteries of 2021

Rechargeable battery chargers don’t tend to break new ground with their design, but the circular shape of the Powerowl 16-bay charger offers refreshing variety. Beyond the visuals, its design provides a few practical benefits. The 7.8-inch diameter and one-inch height are fairly compact for such a large number of slots, making it easy to carry around and find a place for. Each of the slots has three air vents built in to help keep temperatures down and a small LED light that turns from red to green when charging is done.

On the practical side, each slot can charge a single Ni-MH or Ni-Cd AA or AAA battery independently and in any combination. Its 300 mA charging current isn’t particularly fast, rating at seven hours to charge 1 to 4 AA batteries and 3.33 hours for 1 to 4 AAAs. But leave it on overnight and smart features will handle the rest, cutting off the current when charging completes and switching to a trickle charge to make up for self-discharge.

The Energizer Recharge Pro is a high-quality battery charger that can handle 2 or 4 AA or AAA NiMH rechargeable batteries at once. That may not sound like a lot compared to other chargers, but it has features that make up the smaller capacity. There's a charging status indicator to give you a visual cue for how much charge the batteries you're charging have.

Moreover, you can get full charge in just 4 hours with the rapid charging battery. To prevent overcharging, there's an auto safety shut off feature that can help maximize battery life and reduce wear and tear. Finally, the design of the charger is compact and you can plug it directly into an AC outlet so it won't take up space on your desk.

The best rechargeable battery charger is the Panasonic Eneloop Quick Charger (view at Amazon). It can handle AA or AAA batteries, providing one or two batteries with a rapid charge of 1.5 hours or four batteries with a charge time of three hours. For a more affordable option we also like the AmazonBasics Battery Charger (view at Amazon). It can hold up to four AA or AAA batteries and it has overcharge protection.