We've got just what you need to dodge a speeding ticket

The Rundown
Best Detection Speed:
Cobra RAD 350 at Amazon
"Can detect a radar faster than any other budget model available."
Best Protection:
Cobra XRS 9370 at Amazon
"Detects all 14 known radar and laser frequencies."
Best Audio:
Cobra ESR800 at Amazon
"Notifies you via digital announcements when it picks up on a radar signal."
Best Value:
Uniden DFR1 at Amazon
"The Uniden DFR1 is a great affordable radar dector for use in cities and highways and works in both the front and rear of your car."

The best radar detectors for under $100 should have a good range, easy controls, and give you ample warning to help you avoid radar. Our top pick is the Cobra RAD 350 at Amazon, a fast radar detector that has "instant on" protection to identify threats. It can hit all known radar bands and VG-2 signals to offer full protection, nad has a number of features that help you determine your range from a radar gun.

To expand your protection while driving, you should also take a look at our list of the best police scanners. Read on to see the best radar detectors to get for under $100.

When it comes to detection speed, the Cobra RAD 350 radar detector is your best chance at identifying threats. Assisted by its “instant on” protection, the Rad 350 can detect a radar faster than any other budget model available. Its IVT (In-Vehicle Technology) filter helps reduce the number of false alarms from electronics that might otherwise provide false flags such as a vehicle collision avoidance system or a traffic flow monitoring device.

The detector hits all known radar bands (X, K, Ka), laser and VG-2 signals for complete protection. Alongside its more premium features, the RAD 350 adds a secondary set of extras such as auto dimming, quiet alerts and a digital strength meter to help determine your range from the radar or laser gun that's attempting to spot you speeding. The seven-segment color display offers identifiable icons for determining which signal is pinging locally and it can be easily read in daytime and nighttime conditions. 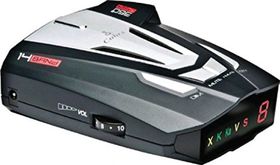 Buy on Amazon Buy on Walmart Buy on Jet

Highlighted by Cobra’s super-fast sweet circuitry, the XRS 9370 helps provide immediate notification of a detected threat even against the fastest radar guns in the law enforcement arsenal. With both VG-2 and Spectre technology onboard, the XRS 9370 can help avoid detection by radar detector-detectors. The availability of KU band detection allows the XRS 9370 to remain futureproofed. In addition, the Cobra detects all 14-known radar and laser frequencies at ranges that are far enough to allow plenty of time to slow down and avoid a ticket. The radar detector offers 360 degrees of detection, as auto dimmer for nighttime use, city and highway modes, as well as a signal strength meter to help determine the range to a target.

The Cobra ESR800 is a great radar detector for users who want to stay aware of upcoming threats without taking their eyes off the road. With 360-degree LaserEye signal detection, the ESR800 alerts you to emergency vehicles, road hazards and radar scanners. But what differentiates this model the most is its VoiceAlert technology, which notifies you via digital voice announcements when it picks up on a radar signal. These notifications are easy to understand and allow you can stay focused on the road ahead.

This detector also has an ultrabright data display with band identification icons that give you the information you need at a glance. You can also switch the ESR800 between city and highway mode to reduce false alerts while driving in densely-populated areas.

The Uniden DFR1 is an affordable long-range laser and radar detector. It can detect both from the front and rear of the vehicle, giving you protection from both sides. It has an IVT filter and anti-falsing circuity to reduce false alarms from blindspot and vehicle avoidance systems. It can provide alerts for incoming laser gun signals. The range is at least 2 miles in flat, open conditions, though hilly terrain may affect range. The software on the detector is updateable, giving you the most recent information, and the unit comes with a 12V power cord, suction cup windshield mount, and hook and loop fastener for dash mounting.

The best radar detector to buy for under $100 is the Cobra RAD 350 (view on Amazon). It has "instant on" protection for fast signal processing, has an IVT filter to reduce false alarms, and can detect all known radar bands, laser, and VG-2 signals. We also like the more expensive Cobra XRS3970 (view on Amazon) for its high-performance capability, 14 radar/laser band detection, and a city and highway mode for reducing false detection.

What to Look for in a Radar Detector Under $100

Detection range - The better the range of your radar detector, the more time you will have to slow down and avoid a speeding ticket. The best ones can detect a signal up to three-quarters of a mile away, giving you ample time to hit the brakes.

Smart features - While all radar detectors will detect lurking law enforcement—albeit at different distances and speeds—some have additional features that provide added value. For example, some have VG-2 detection, which eliminates detection by a radar detector-detector, and even live traffic data and audio VoiceAlert technology.

Design - Most radar detectors have a similar design: a black or silver body with sharp angles reminiscent of a race car. However, some are more motorist friendly and feature easily readable display screens and intuitive button layouts.