Avoid getting pulled over with these great radar detectors

The best radar detectors will help limit the number of tickets for any driver with a need for speed. A radar detector exposes if a police officer is using a radar gun to monitor the speed of your vehicle. The key to finding the perfect radar detector is to look for the ideal range, price, and design.

The territory range should be the most significant factor in deciding whether to purchase a model or not. This component is essential because it will be what prepares you to slow down when in the presence of officers. Do not be surprised if you find a detector that discloses from up to 5 miles away! When it comes to design, try not to look too much into aesthetics and instead consider the weight and dimensions. As for the price, this varies, depending on the level of functionality your new device offers. If your budget is smaller, there are also plenty of options.

Radar detectors can be a tremendous help to drivers, but before looking for one of the best radar detectors, make sure to check if they are illegal in your state. 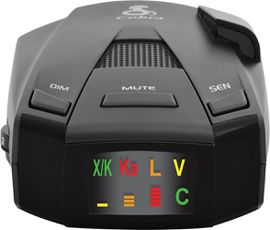 If you're hoping to avoid speeding tickets when you're out driving, you need a radar detector that works quickly, reliably, and at long-range. With the high-powered radar and laser detection technology on the Cobra RAD 250, you'll get that all-important on-the-road peace of mind. It rapidly sweeps for and alerts you to police radar signals on the typical X, K, and Ka bands (and the Ku band used in Europe), with 360-degree coverage for laser signals as well. It even warns you if nearby cops are using VG-2 or Spectre types of radar detector detectors (RDDs) in places where radar detectors are illegal (Virginia and Washington DC).

Light and compact, the RAD 250 is easy to handle and to install. Suction cups allow it to be mounted to your windshield, and a long power cord plugs into your car's power supply. Using the device is simple, too. Even without more advanced, flashy features like GPS or Bluetooth, it offers plenty of convenient touches. Three brightness levels include an ultra-bright setting. Alerts can be automatically muted when you're stopped or moving slowly. The ability to switch between Highway mode and City mode helps cut back on false alerts in busy areas, though users note that it can still be overly sensitive to false signals. 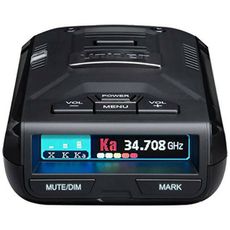 The Uniden R3 is a workhorse radar detector that offers a variety of features that’ll make it the perfect car companion, whether on long road trips or just driving around town. It offers a 360-degree, full-spectrum digital signal processing that allows for, theoretically, no blind spots (great for detecting even the sneakiest of hiding cruisers). The built-in GPS functionality adds additional red light cam detection, a trap that many fall into even with simpler featured radar detectors.

They’ve included the requisite K False and KA False filters, a feature that will help to limit noise interference from older model cars (such as Cadillacs). That last feature is crucial to eliminate false positive radar detection. Finally, there’s limited voice control, so you don’t have to take your hands off the wheels, and there’s even quiet operation so that the only people who will know you’re using a radar detector are those that you want to know.

What's in Your Blind Spot Can Hurt You 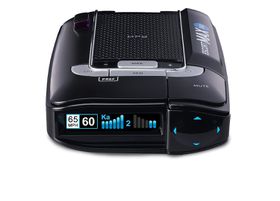 Courtesy of Amazon.com
View On Amazon View On Best Buy
What We Like
What We Don't Like

At 1.9 pounds and 5.4 inches long, the Max 360 is larger than most detectors on this list, but with great size comes a greater feature set. With a similar feature set to the Passport Max2, the Max 360 adds enhancements like directional alerts to the display, which tells you the direction a radar ping is coming from. The Max 360 detects all the currently used law enforcement bands: X, K, Ka, Ka-Pop, plus laser detection. The Max 360 includes the “Auto” setting, which expands its detection range based on the speed of the vehicle (so you'll have a longer range on a highway and a shorter range on suburban streets).

As the name implies, the combination of GPS, Escort Live for crowdsourced results and 360-degree protection fills the Max 360 to the brim with features. Extra features include an over-the-speed-limit alert, display lights showing different types of radar detection and Bluetooth connection via your smartphone through Escort Live. The pre-installed Defender Database adds the red-light and speed cameras, though some Escort users have complained that the database is too small and that Escort doesn’t offer frequent updates.

How Do You Get Bluetooth for a Car? 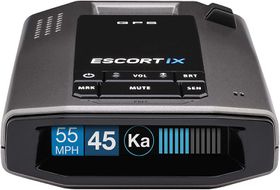 Intelligent and high-performing, the Escort iX offers some of the longest potential range on a radar detector across the X, K, KA, and POP frequencies. Buoyed by its superior sensitivity, the maximum range coverage is a real boost for drivers who are constantly on the road, especially on long stretches of highway where advanced detection can make all the difference. Escort’s DSP technology and its enhanced laser sensors provide one of the earliest warnings of speed-monitoring threats or traps that could be on the road ahead.

Escort’s proprietary false-threat detection combines with GPS to automatically detect and fix false alarms for drivers. Syncing to Escort’s Live community, iX users are afforded real-time ticket protection against photo enforcement, caution areas and live police alerts, thanks to the huge number of users working behind the scenes to protect against threat detection and the 10,000 radar and speed cameras inside the United States.

Dig Up Some Treasures With the Best Metal Detectors 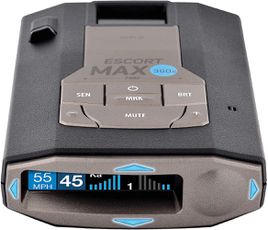 View On Amazon View On Best Buy View On Crutchfield.com
What We Like
What We Don't Like

For those used to more visual gadgets, the Escort MAX 360c's looks are as impressive as they are functional. It not only detects X, K, and Ka radar frequencies and laser signals with 360-degree coverage, but it also uses directional arrows to quickly and precisely indicate where those signals are coming from. These combine with its multicolor OLED display to arm drivers with a wealth of useful information.

Beyond what you can see, there's no shortage to what the MAX 360c can do. Its GPS lets you mark known speed traps on your route, and it learns from false alarms to automatically block them out in the future. This is in addition to already filtering out collision avoidance, blind spot detectors, and other in-vehicle technology (IVT) that might trigger alerts, on top of a pre-loaded database of camera locations across North America.

But the MAX 360c's biggest differentiator is its integration with connected vehicles. It can use a Wi-Fi signal if your car has one, or connect to your smartphone through Bluetooth. You can then take advantage of the Escort Live app (one free year of premium subscription included) and real-time crowd-sourced alerts from its community of drivers. All this advanced tech comes at a price, but there's no denying the level of detection performance and connected convenience the MAX 360c can provide.

While it lacks some of the bells and whistles that are present on some of our other top picks. Our favorite radar detector is the Cobra RAD 250 (view at Amazon), for its ruggedness, range, and reliability. Having GPS and Bluetooth can be nice, but having a device that can simply be switched on and work as advertised is a welcome quality of life improvement.

David Beren is a tech writer with more than 10 years of experience in the industry. He has written and managed content for tech companies like T-Mobile, Sprint, and TracFone Wireless.

What to Look For in a Radar Detector

The better the range of your radar detector, the more time you’ll have to slow down. Range depends on the number, direction, and quality of the antennas. Some of the best devices out there can score you up to five miles of signal reach.

As mentioned above, in some states it’s illegal to mount a radar detector on your windshield as it may affect the driver’s vision. When comparing designs of radar detectors, consider how you plan to mount yours. Also think about the size and weight of the detector, as a smaller car might demand a smaller device.

Radar detectors can easily run up in price, with some premium models costing as much as $500. You can get a perfectly decent one for less than $100, though the range might not be as good.