The value of these devices is more than sentimental

The best portable CD players offer a great alternative to MP3 players if you own a large collection of music on discs and want to listen to them on the go. Though streaming music has nearly completely overtaken physical media, there is still a certain amount of satisfaction in loading up a CD and enjoying some high-quality audio. There is a deliberation and purposefulness in choosing a specific album from your collection that results in more thought being put into your choice of music than just burning through a playlist on your favorite streaming service.

The Rundown
Best Battery Life:
Gueray CD Discman at Amazon
This portable CD player features a large, rechargeable lithium ion battery that will provide 12 hours of uninterrupted use on a single charge.
Best AA Battery Life:
GPX PC332B at Amazon
This model uses two AA batteries and gives you up to six hours of use on a single set.
Best Rechargable:
Naviskauto CD Player at Amazon
Has five preset audio optimizations, including bass boost, pop, jazz, rock, and classic.
Best Radio:
Supersonic SC-253FM at Amazon
MP3/CD-R/CD-RW compatible, meaning you can make your own mix CDs without worrying about whether or not they will play.
Best for Excercise:
GPX PC807BMP3U at Amazon
Features a rubberized coating, making it easy to hold on to while going on a walk or doing chores around the house.
Best LCD Screen:
Monodeal Portable CD Player at Amazon
With its particularly large, backlit LCD, you aren’t likely to find a portable CD player with a more readable display than this one by Monodeal.
in this article 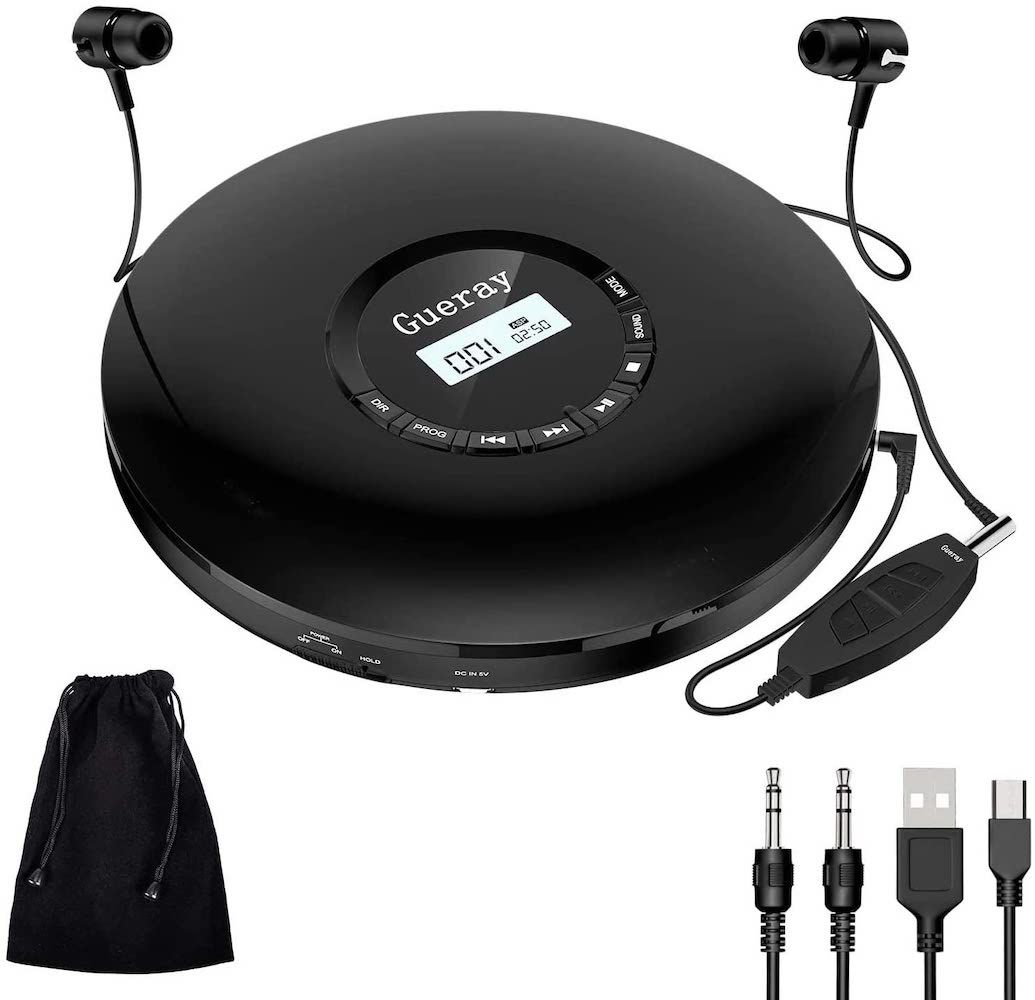 For all-day listening, you need a big battery, and that’s just what the Geuray CD Discman offers. This portable CD player features a large, rechargeable lithium ion battery that will provide 12 hours of uninterrupted use on a single charge. That’s enough to last even the most avid audiophile a full day of pleasant listening. You won’t have to worry about packing extra batteries for this device.

You also get a variety of optimization presets for bass, pop, jazz, rock, and classical, and the Gueray features 100 seconds of anti-skip protection. Furthermore, it includes various playback options such as repeat and shuffle, and is both sleek and compact for easy transport. It comes with earbuds, among other accessories, and an impressive 12-month warranty in addition to a 90-day return and exchange window.

The 5 Best CD Recorders and CD Recording Systems of 2022 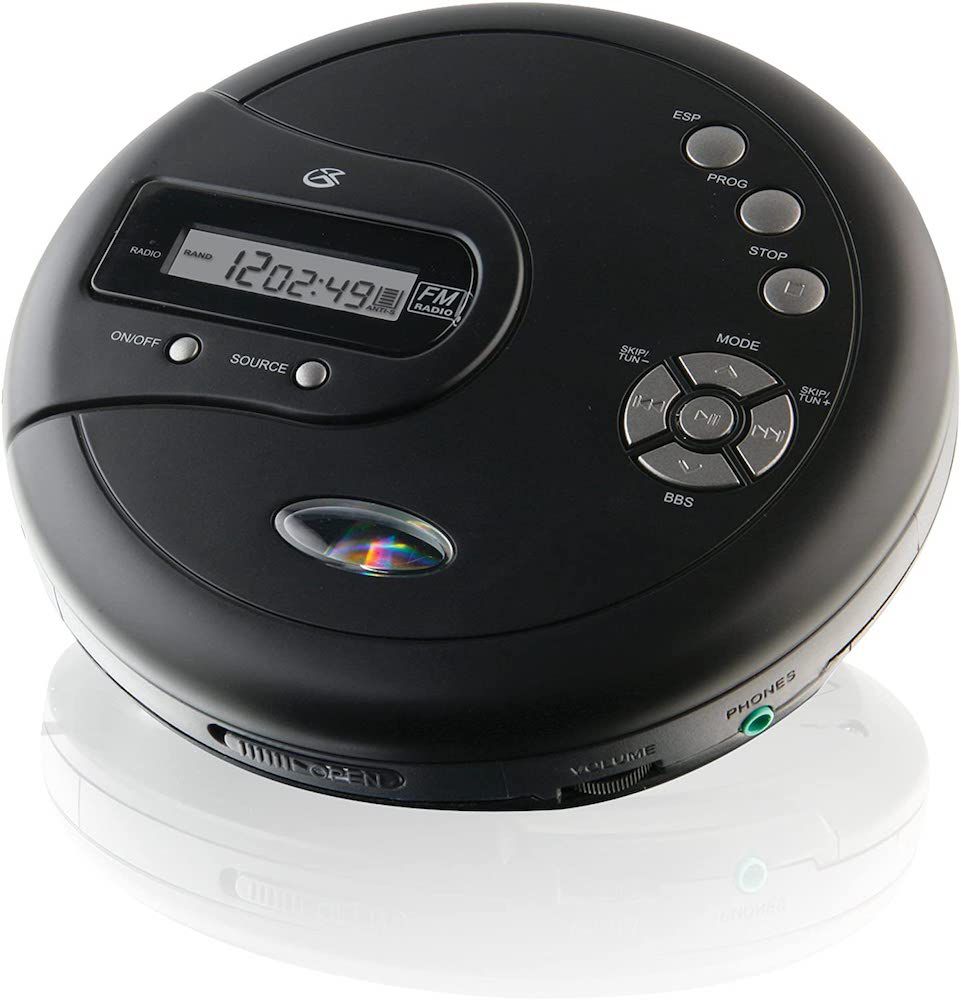 Unlike many CD players, the GPX PC322B uses AA batteries rather than a built-in rechargeable battery. This is ideal if you’re traveling to remote locations and don’t have access to power sources. You can bring as many batteries as you’re likely to need and not worry about running out. However, with each set of two AA batteries, you get 6 hours of playback. That’s plenty, though rechargeable players can get as much as 12 hours on a charge.

For features, you get a built-in FM tuner that has programmable preset stations, as well as 60-second anti-skip functionality. Track names, radio stations, and settings info are displayed on a black and white LCD screen. The GPX PC322B also includes a pair of stereo earbuds for listening in private on the go. 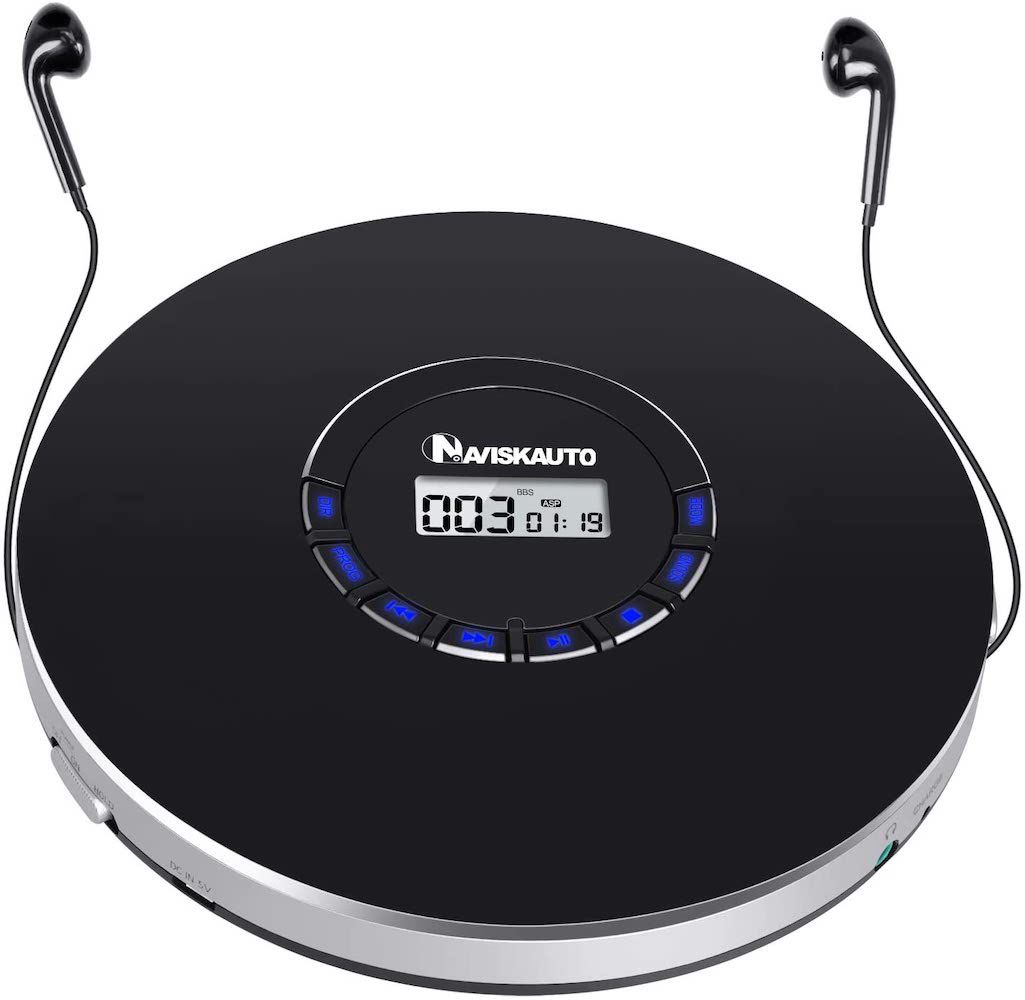 The Naviskauto CD Player sets you up with all the accessories you need: earbuds, a USB charging cable, and a 4.9-foot AUX cord, but it’s most impressive quality is its battery life. This CD player will keep your tunes going for a whopping 12 hours.

The system also features presets for pop, jazz, rock, and other music, as well as a “last memory” function with which it’s able to remember your track location after it’s turned off so you can resume listening from the same location. There’s also repeat, shuffle, and other playback options, and the LED display is backlit to make it easy to use in dim or dark conditions. 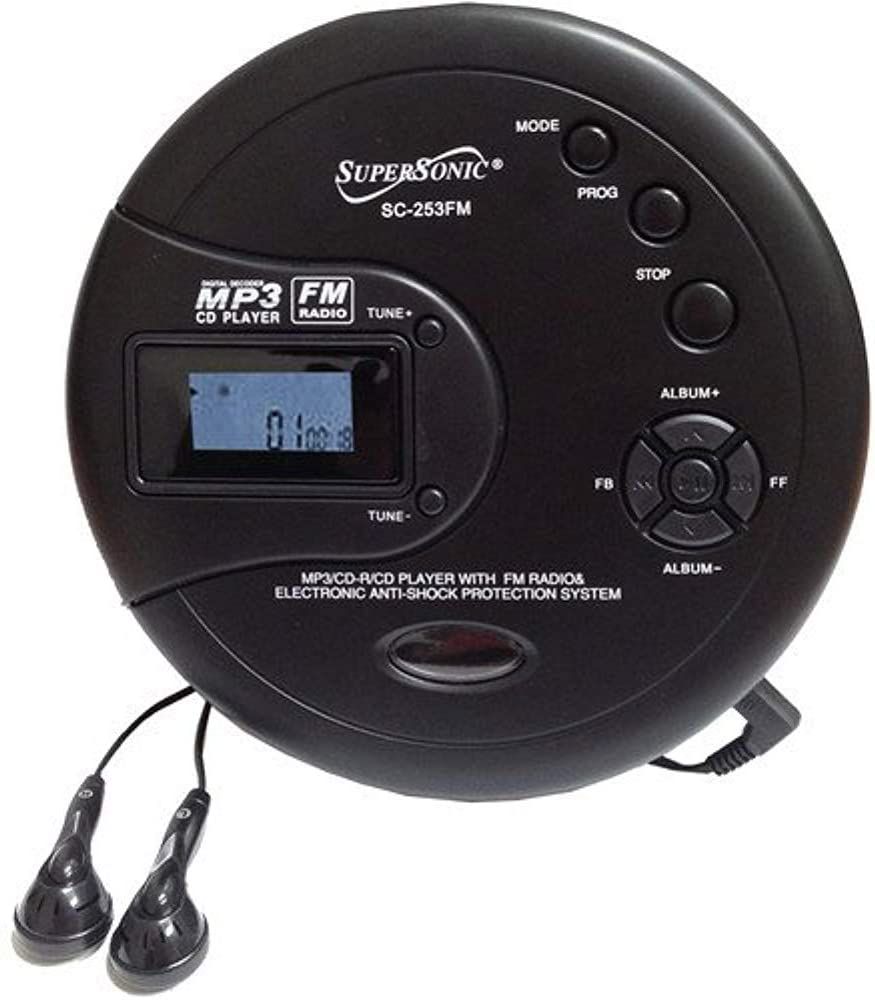 The Supersonic SC-253FM offers perhaps the best FM radio functionality of any portable CD player, allowing you to listen to broadcast radio in addition to your physical media. This is mainly due to its excellent control system that makes finding a radio station easy.

It also comes with earbuds, which is great if you’re picking it up on a road trip and have lost or forgotten a pair of headphones. 40 seconds of anti-skip while playing regular CDs and 120 seconds of anti-skip for MP3 format CDs means that you’ll be able to enjoy your music without interruption, and features such as shuffle and repeat are great options to have while listening to your favorite albums. 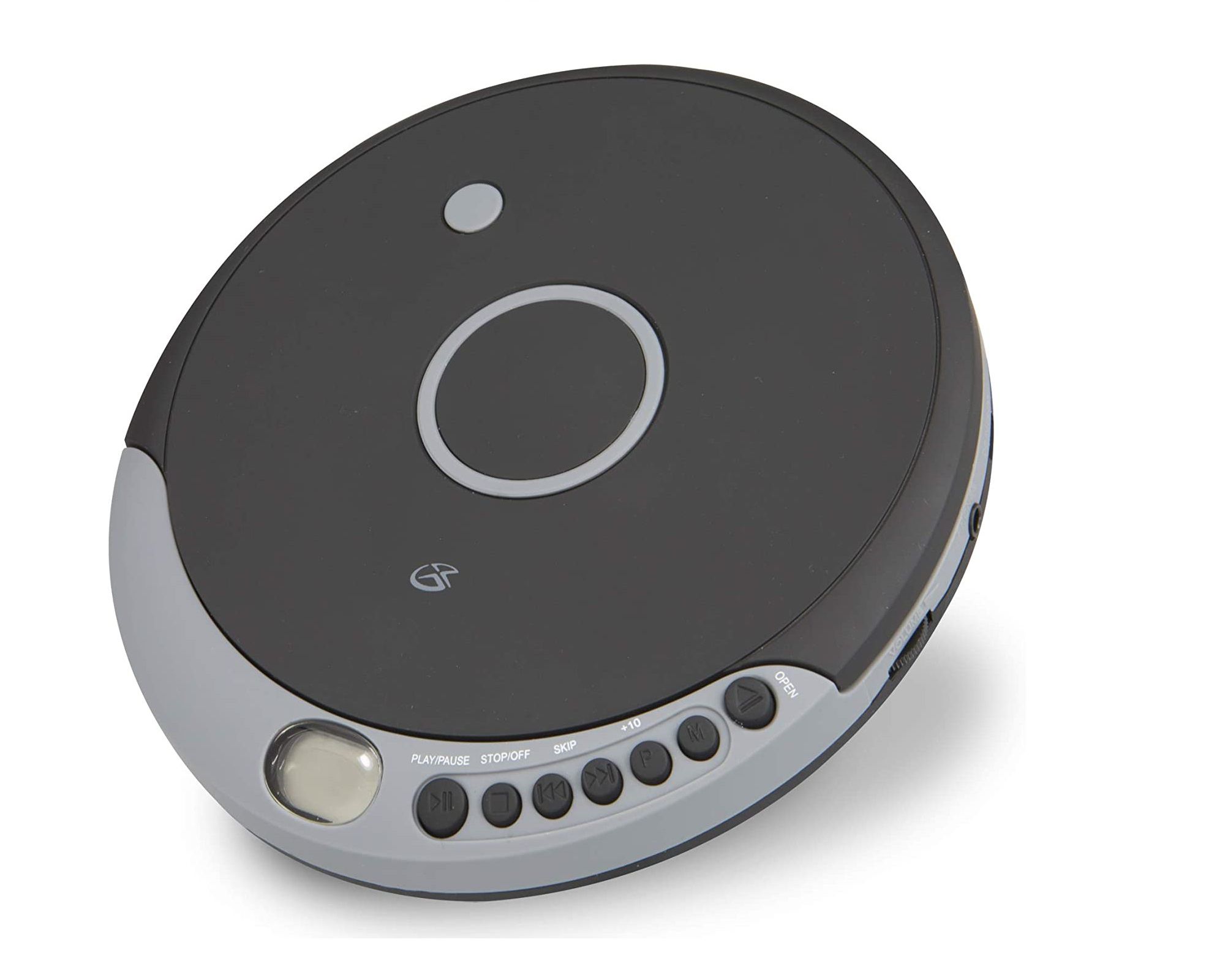 CD players and their spinning disks are vulnerable to the negative effects of sudden movement, which poses a real problem for those who want to take their CDs with them jogging or to the gym. The GPX PC807BMP3U offers up to 200 seconds of anti-skip protection so that all those bumps and jumps don’t interfere with your tunes. It also has a rubberized exterior which makes it easier to hold with sweaty hands.

Additionally, the GPX PC807BMP3U comes with earbuds and can use either AA batteries or a 12V car adapter for power. Unfortunately, there is no “last memory” function, nor is there a built-in radio, and customers report units arriving DOA. Fortunately, GPX offers a 90-day warranty to cover manufacturing defects and DOA CD players. 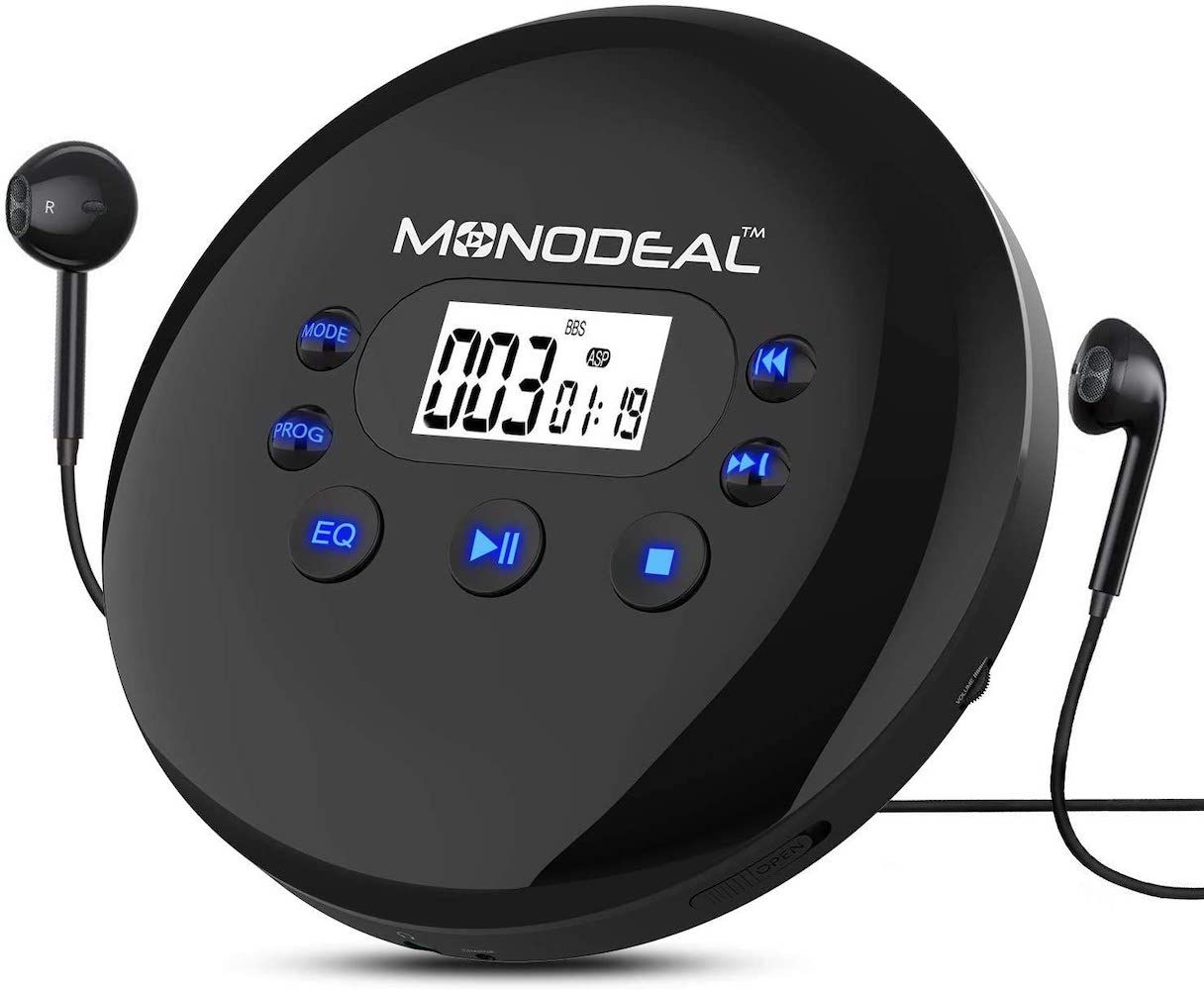 With its particularly large, backlit LCD, you aren’t likely to find a portable CD player with a more readable display than this one by Monodeal. Thanks to its backlit screen and buttons, this device is particularly useful in low light conditions, and the included earbuds and AUX cable enable easy listening on the go or at home.

The Monodeal Portable CD Player also has a particularly long-lasting rechargeable battery that should keep your tunes going for up to fifteen hours. Additionally, this portable CD player features anti-skip and anti-shock technology, as well as support for a variety of CD formats. Also, you get several playback modes such as repeat and random, and sound effects for BBS, Pop, Jazz, Rock, and Classical music. The only real downside of the Monodeal Portable CD player is that it doesn’t include an FM radio.

We like the Geuray CD Discman (view at Amazon). It's a smaller, lighter option which also features a rechargeable battery with 12 hours of playback time.

About Our Trusted experts

Andy Zahn has been writing for Lifewire since 2019 and is an enthusiastic connoisseur of music and an amateur musician himself. Andy has tested and reviewed a wide range of audio equipment and is likely to be found listening to music while working, traveling, or relaxing at home.

What to Look For in Portable CD Players:

Portable CD players often come with a number of accessories, with earbuds being the most commonly bundled. These are nice to have if don't have a good set of headphones or are picking the CD player up while traveling and forgot your earbuds at home. However, they’re almost never high quality. More useful perhaps is when an AUX cable is included, which allows the CD player to be plugged into a car stereo or other speaker system.

Most portable CD players do more than just play CDs, and often include features to improve your experience playing CDs. Look for anti-skip technology that buffer audio and guards against listening interruptions caused by movement of the player, and an included FM radio will keep you entertained when you’re tired of your CD collection.

It seems that customers often experience issues with their portable CD players right out of the box due to a troubling problem of quality control. It’s such a prevalent issue that some manufacturers prominently advertise their warranty coverage of DOA (Dead On Arrival) products. A good warranty is certainly something to look for when purchasing a portable CD player.