A great way to stay informed and up to date

The best police scanners are easy to set up and use, providing clear audio quality on a broad range of frequencies.

For most people, we think our best budget pick, the Uniden BC365CRS is the one you should just buy.

Police scanners let you stay on top of local events and ahead of the curve in several potentially dangerous situations. You can also use a police scanner to stay abreast of local news before it's reported on television, you can get weather alerts and find out about an impending natural disaster, or you can tune into amateur radio channels. The best police scanners can also serve as an alternative to a standalone CB radio or radar detector, so read on to see your options. 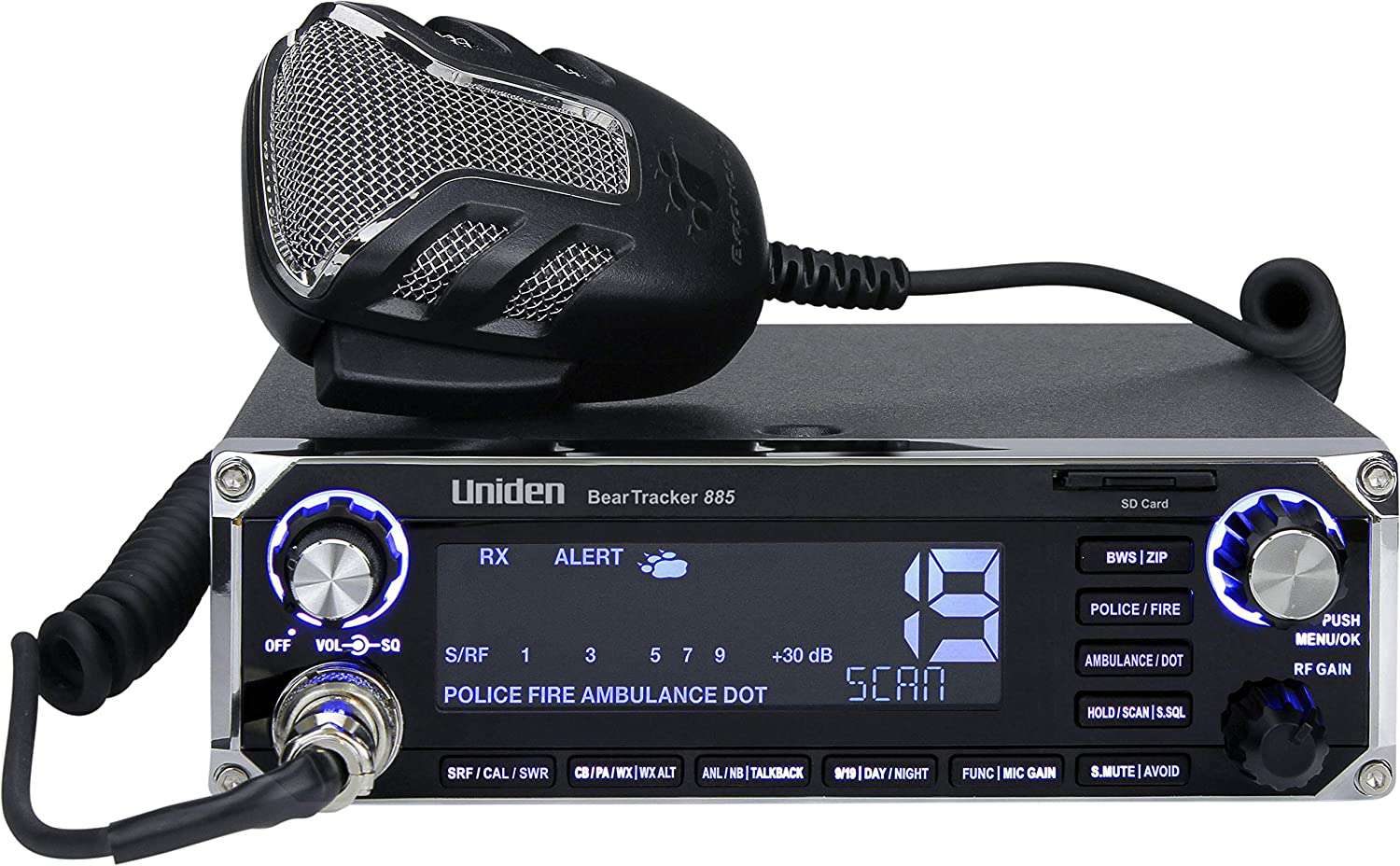 Although it’s one of the pricier options on this list, the Uniden Beartracker 885 is a full-featured CB radio and digital trunk tracking police scanner. It has GPS included, so it can automatically select nearby channels from its database (which is updated weekly). You don’t have to do any sort of complex programming while you drive, as the scanner does the work for you. It provides weather alerts, PA functionality, and more, and you can easily read the LCD.

For anyone who spends a lot of time on the road, this is an excellent device for communications, safety, and general peace of mind. It alerts you when there’s a nearby public safety transmission, so it serves as a radar detector alternative. The BearTracker 885 has a noise-canceling mic that allows for clear conversation, and it’s also wireless mic compatible. 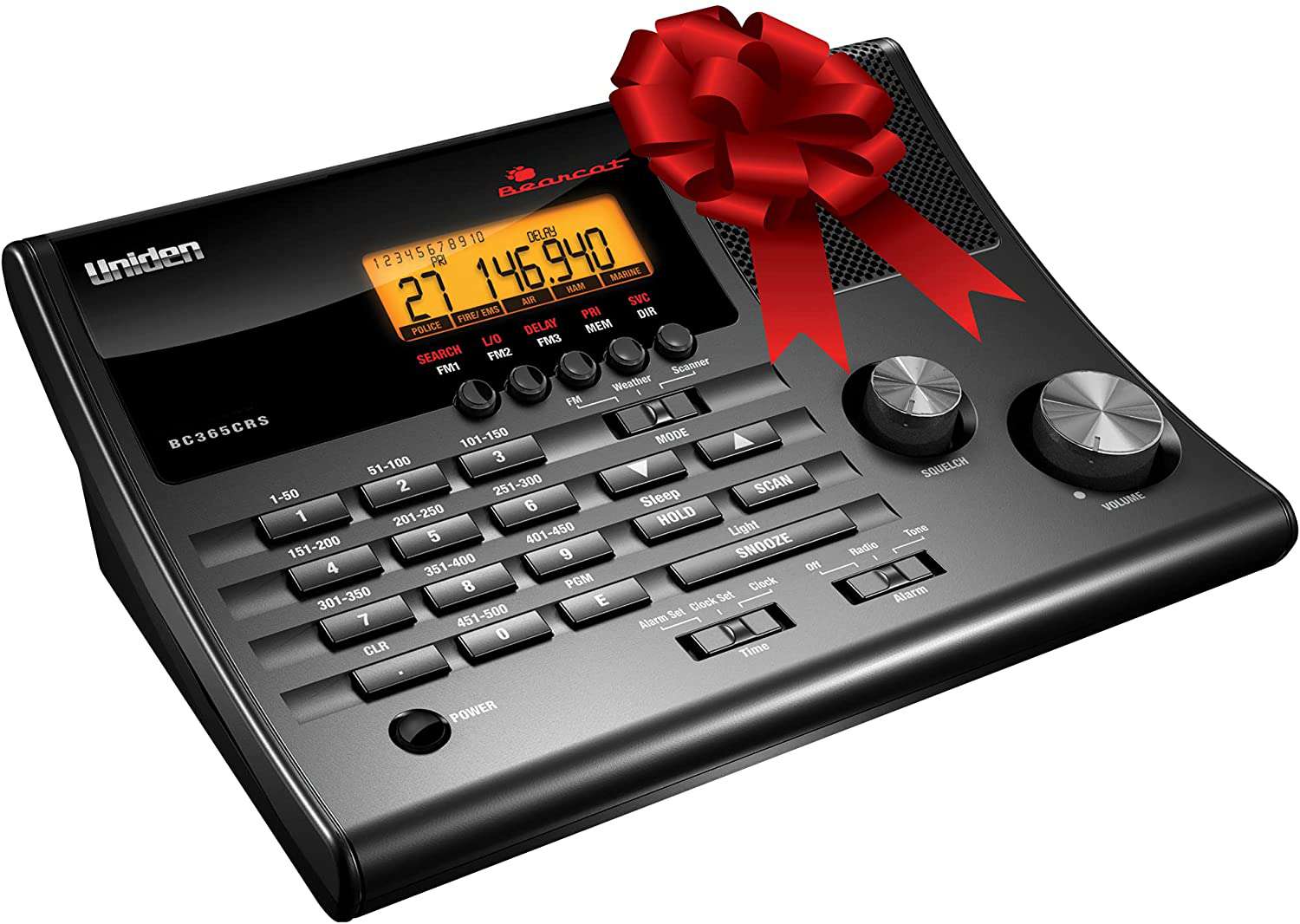 The Uniden BC365CRS is a 500 Channel Scanner that also serves as an alarm clock, an AM/FM radio, and FM broadcast radio, and a weather alert device. It includes 500 channels in 10 Banks, so you can search police and fire bands, as well as aircraft, amateur radio, and marine transmissions.

The BC365CRS takes three AA batteries, and it includes an antenna and AC adapter in the package. This is designed as a tabletop scanner, so it’s not the best option to take with you on the go.

The reception will depend somewhat on your geographic area and the type of transmissions you’re attempting to receive. Most users say they receive clear audio with police, fire, weather, and radio transmissions, but this is a basic, analog, non-trunking scanner, so it may not be able to pick up transmissions from some agencies. It’s best to check the compatibility against the local agencies in your area. 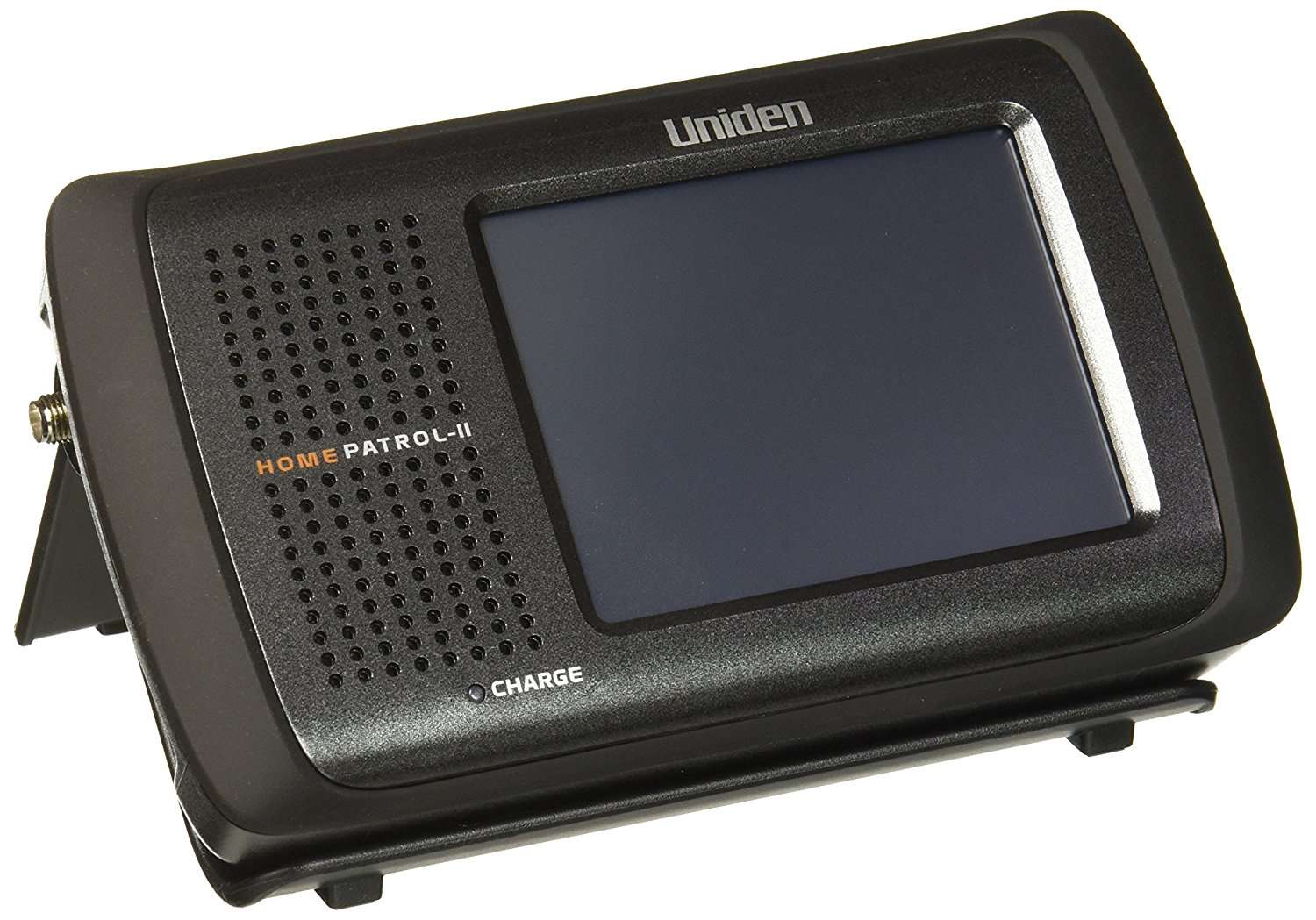 With an easy to rest stand, the Uniden HomePatrol-2 digital scanner with a pre-programmed database is a highly functional scanner that’s perfect for any room in the house. Including specialized features such as quick record and playback, the Uniden is a highly recommended digital scanner that can be up and running in minutes. There’s no programming needed here—just enter your zip code and HomePatrol-2 will load all the recognized police, fire, and EMS channels in the surrounding area. It includes channel information for the US and Canada from radioreference.com.

Weighing just over a pound, the HomePatrol-2 is easy to tote around. Additionally, the inclusion of a touch screen was an industry first with the HomePatrol-2. Uniden also includes rechargeable batteries that last between five to six hours. It comes with a USB charging cord that you can connect to a standard USB power brick. 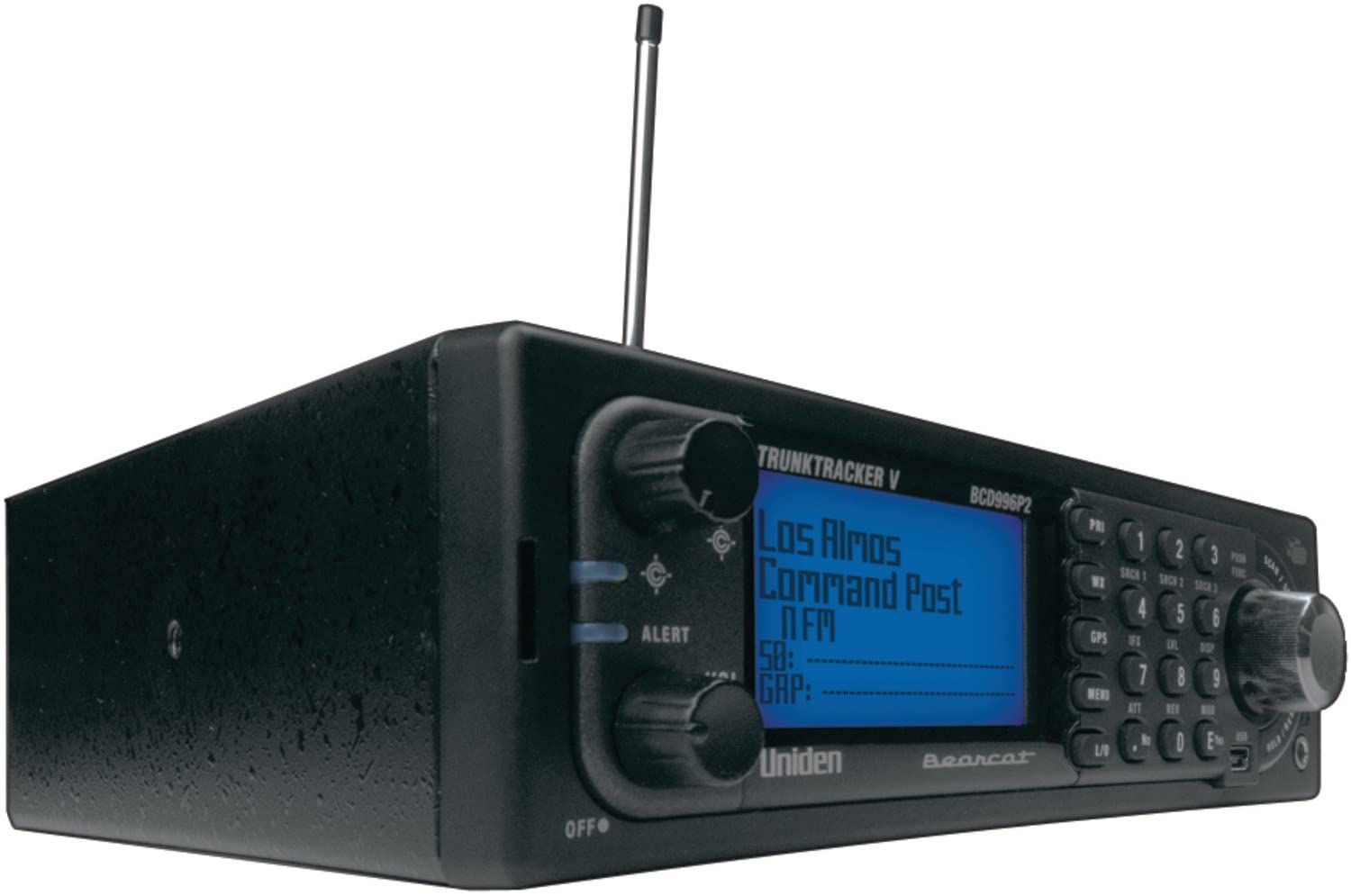 There aren’t that many brands in the police scanner game (as you can probably tell with a quick skim of this very list), but Uniden is a major player in the world of scanners. Meant as a one-stop-shop for analog scanning and digital transmissions, the Uniden BCD99P2 is one of the better scanners out there. Whatever your needs, the BCD99P2 most likely has you covered, even if it does so in a fairly large package.

The BCD99P2 is capable of location-based scanning, and it can detect nearby radio transmissions. The TrunkTracker V scanner also offers continuous band coverage spanning 25 MHz to 1.3 GHz. Factor in 25,000 different dynamically allocated channels, and you’ll have enough options to cover all your local systems, recalled via the intuitive internal memory of the unit. It all comes in a compact 11 x 3.75 x 8.5-inch unit with a bright display and easy-to-navigate controls. 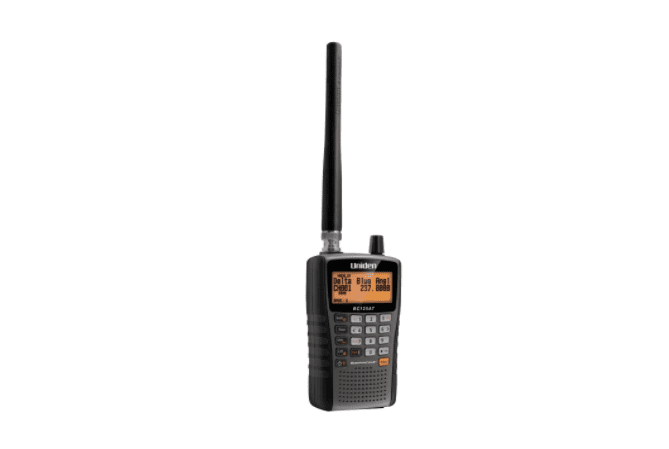 Featuring the ability to connect to public safety, military aircraft, and racing scanner channels, Uniden’s BC75XLT is a terrific choice for analog scanner fans. The built-in search functionality is second-to-none, and it quickly identifies channels for police, fire, marine, air, weather, and more, which makes the BC75XLT a very much pickup-and-go analog scanner.

You can save 300 channels into the scanner’s memory or 30 channels total in 10 separate banks. This makes it easy to scan for current transmissions on each stored channel. Additionally, the inclusion of Close Call RF capture technology assists the BC75XLT in identifying and detecting nearby transmissions, even if they aren’t pre-programmed into a channel. Powered by two AA batteries, the BC75XLT is both lightweight and designed to fit in the hand. Overall, it has good reception as long as you’re in a strong signal area. 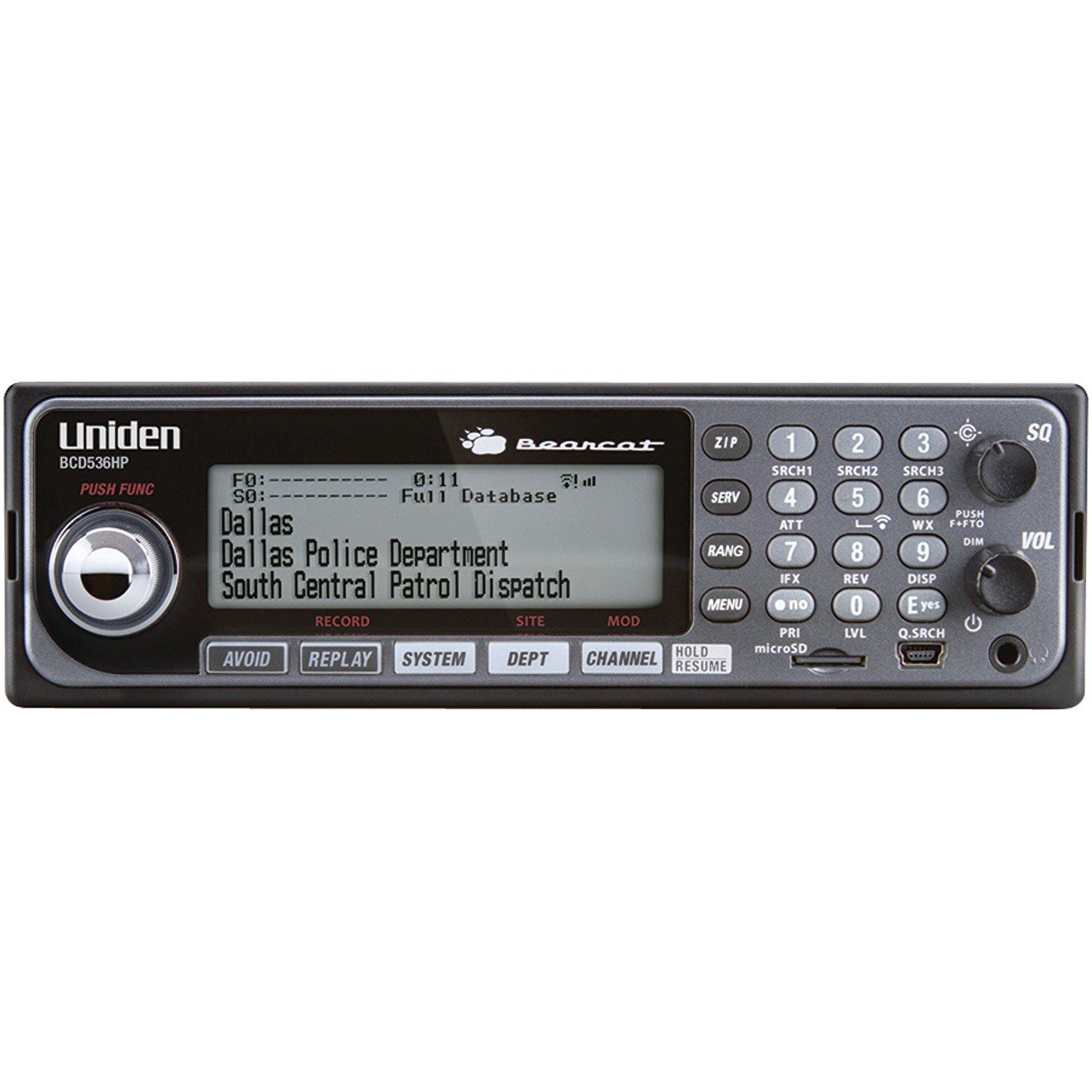 Uniden’s BCD536HP scanner offers some of the easiest-to-program features available on a scanner. You just type in your zip code, and the scanner does the work for you. There’s even a Wi-Fi option that allows you to use the exclusive Uniden siren app on your smartphone or tablet to access the scanner from anywhere in the home or vehicle.

The LCD backlit keypad helps illuminate the unit, so you can see it in the dark and quickly access the controls. Included within the packaging are home and auto power cords, as well as a mounting bracket for inside the vehicle and a Wi-Fi dongle and telescoping antenna. There’s no battery power to worry about since this Uniden scanner runs entirely off the car battery (or a power adapter). Additionally, the BCD536HP was one of the first Uniden scanners to incorporate the HomePatrol data, which allows the easy entering of a zip code and you're ready to listen in. 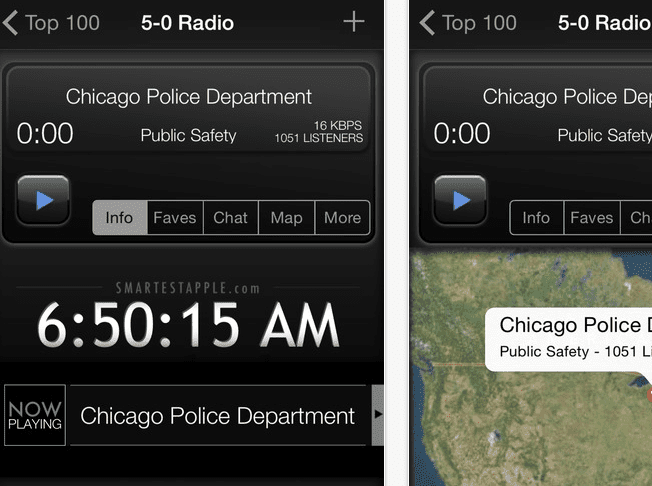 Courtesy of iTunes
View On Apple View On Microsoft View On Google.com
What We Like
What We Don't Like

While the focus of scanners is almost always concentrated on the utilitarian design of the handheld and car-ready hardware, there’s a new and most formidable entry in the market. The 5-0 Radio Police Scanner app, which has millions of downloads. Users can listen to feeds in the background, including police/EMS/fire and military codes, as well as both aircraft and train feeds.

There’s even international coverage where available, so the scanner app can detect your location and determine relevant feeds you’ll want to follow. Currently free in both the Apple Store and Google Play, there’s also a pro option that offers 50,000 more feeds.

The BearTracker 885’s (view at Amazon) included GPS, CB radio, and noise-canceling microphone make it an excellent choice for truckers or anyone who spends a lot of time on the road. For an inexpensive handheld option, the Uniden Bearcat BC365CRS (view at Amazon) is a good model to check out. If you want to try out scanning, test out the free 5-0 Radio Police Scanner app.

What to Look For in a Police Scanner

Your ability to listen in on transmissions from your local police and other agencies hinges on compatibility between their transmitters and your scanner. Digital scanners tend to have the best compatibility, but you’ll get by fine with a less expensive analog police scanner if your local agencies haven’t made the jump to digital yet.

"Using analog or digital would depend on the area you live in. Some provinces and countries are switching to digital, so you would need that depending on where you live." — Whitney Joy Smith, President of Smith Investigation Agency

The other feature that can impact your ability to receive transmissions on a police scanner is trunking. Scanners that don’t support trunking cannot tune in to trunked systems, so this feature is a must-have if your local agencies use trunk lines. Radioreference.com is an excellent resource for finding out if you can receive analog signals in your area.

Do you want a basic scanner or a police scanner with extra bells and whistles? Some scanners may have extra features like an alarm clock, GPS, Wi-Fi, or CB radio functionality.

"The newer police scanners have a built-in GPS to automatically change to different channels as you travel from area to area. This is important as users can filter through channels to get signals nearby or in a specific location elsewhere." Whitney Joy Smith, President of Smith Investigation Agency

Erika Rawes has been a professional writer for more than 10 years. She's spent the last five writing about consumer technology, including gadgets like police scanners for personal use.