The best PC video cards under $250 tend to be a few generations old. They are capable of offering a compelling gaming experience and performing graphically intensive tasks without breaking the bank. They won’t keep up with the latest and greatest graphics cards, but they’re still capable of running most games and software.

Keep in mind that you shouldn’t expect a flawless 4k gaming experience, or to play cutting edge titles at any better than medium settings, but the PC is a platform that is a treasure trove of gaming experiences that have accumulated over the decades. There are a great wealth and variety of virtual experiences that are playable even on lower-end, older video cards. Additionally, there are many excellent current games such as DOTA 2, League of Legends, and Minecraft, which are specifically intended and maintained to be playable on older hardware. Our top pick, the MSI GTX 1660 Super can handle most modern titles with reasonably high settings at 1080p. Whether you’re looking for a low-profile graphics card for a mini-PC build or just building the cheapest PC you can, we’ve researched the best graphics cards under $250 to help you decide. 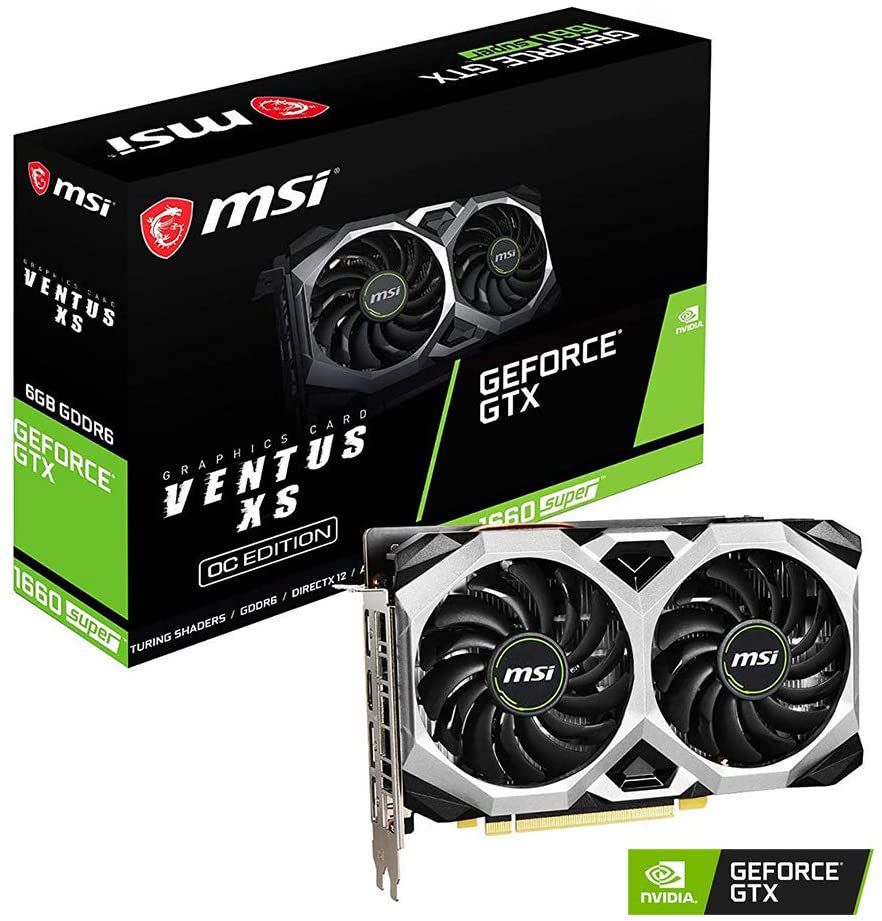 This Nvidia GTX 1660 Super from MSI may be confusing for its name’s resemblance to that of the previous generation of Nvidia graphics cards, but make no mistake, this is a modern graphics card. The GTX 1660 Super rivals the older mid-range GTX 1070, especially in this model, given MSI’s efforts to boost its clock speed up to 1815-MHz. It’s equipped with 6GB of GDDR6 VRAM and is capable of powering through most modern games with high settings at 1080p, and can even push higher resolutions with lower graphical settings.

It also features a quiet and effective cooling system to handle those higher clock speeds while not overwhelming the room with noise. It’s not quite as good a value as our pick for the best overall AMD card, but it has the edge in terms of raw power. The MSI GTX 1660 Super is the perfect pick to power any budget PC. 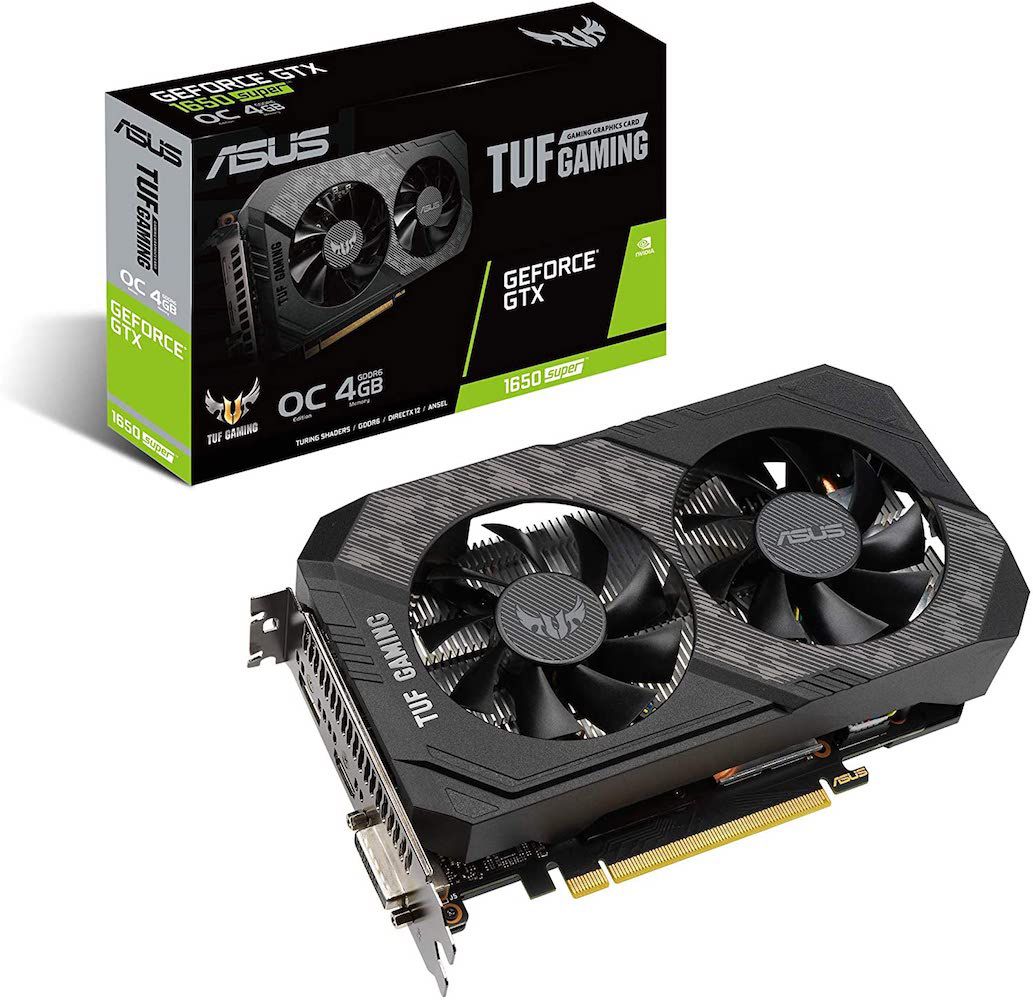 If your budget is really tight and you want a recently released GPU, then the ASUS TUF GeForce GTX 1650 is an excellent pick for high quality 1080p gaming for very little money. It’s only got 4GB of GDDR6 VRAM and its boost clock only goes up to a maximum of 1680-MHz in OC mode, but that’s enough to get you gaming at 60fps in most games in FullHD quality with high settings. It’s cool and quiet, which is a bonus for low noise rigs, and the card feature’s ASUS’s TUF manufacturing quality, which includes IP5X dust resistance, and this should extend the lifetime of this GTX 1650. 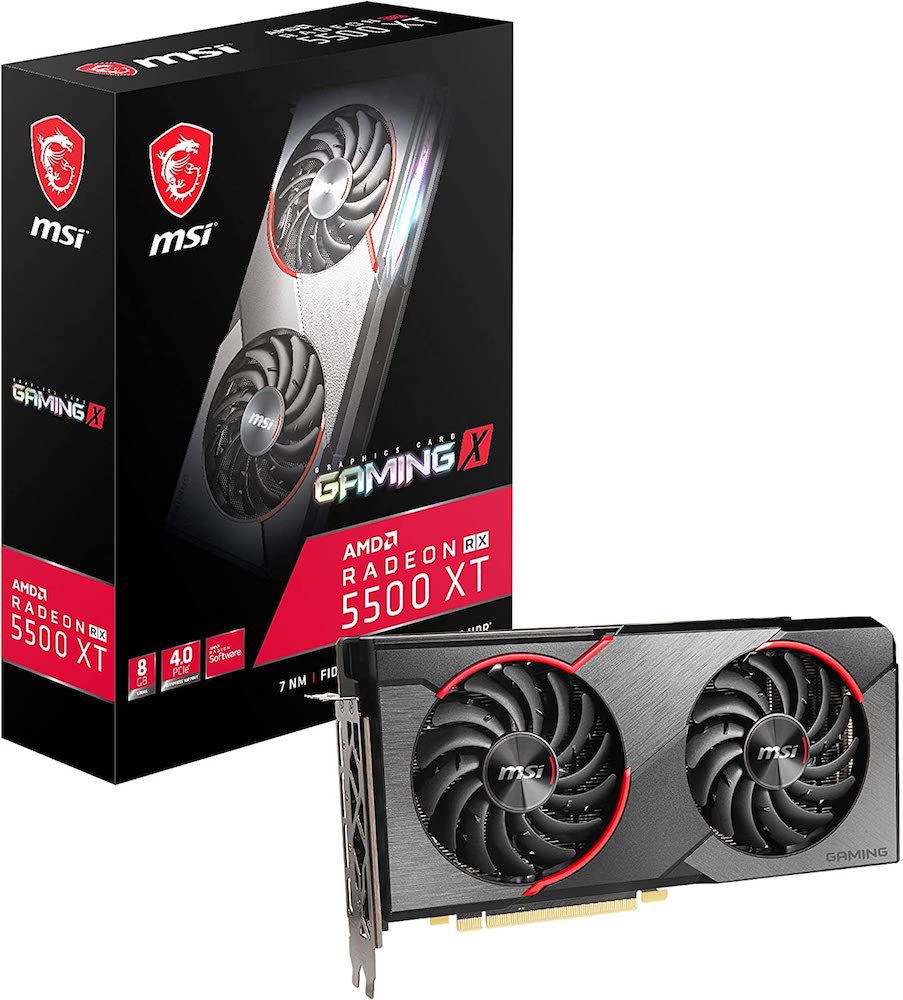 The MSI Radeon RX 5500 XT is a fearsome, modern graphics card that packs a punch at a remarkably low price point. This card features a crazy 8G of DDR6 Vram, which is ideal for modern games and creative applications. With some tweaking you can also boost the clock speed up to a blazing 1845-MHz, making this card capable of playing the latest games on high settings at 1080p. It’s not quite as fast as the GTX 1660 Super, but it’s significantly cheaper.

Despite all that power, this card is actually quite power-efficient, thanks to AMD’s unique architecture, and RGB lighting pairs with an attractive design that is perfect for PC builds that show off your internal components. The MSI Radeon RX 5500 XT offers a lot of bang for your buck. 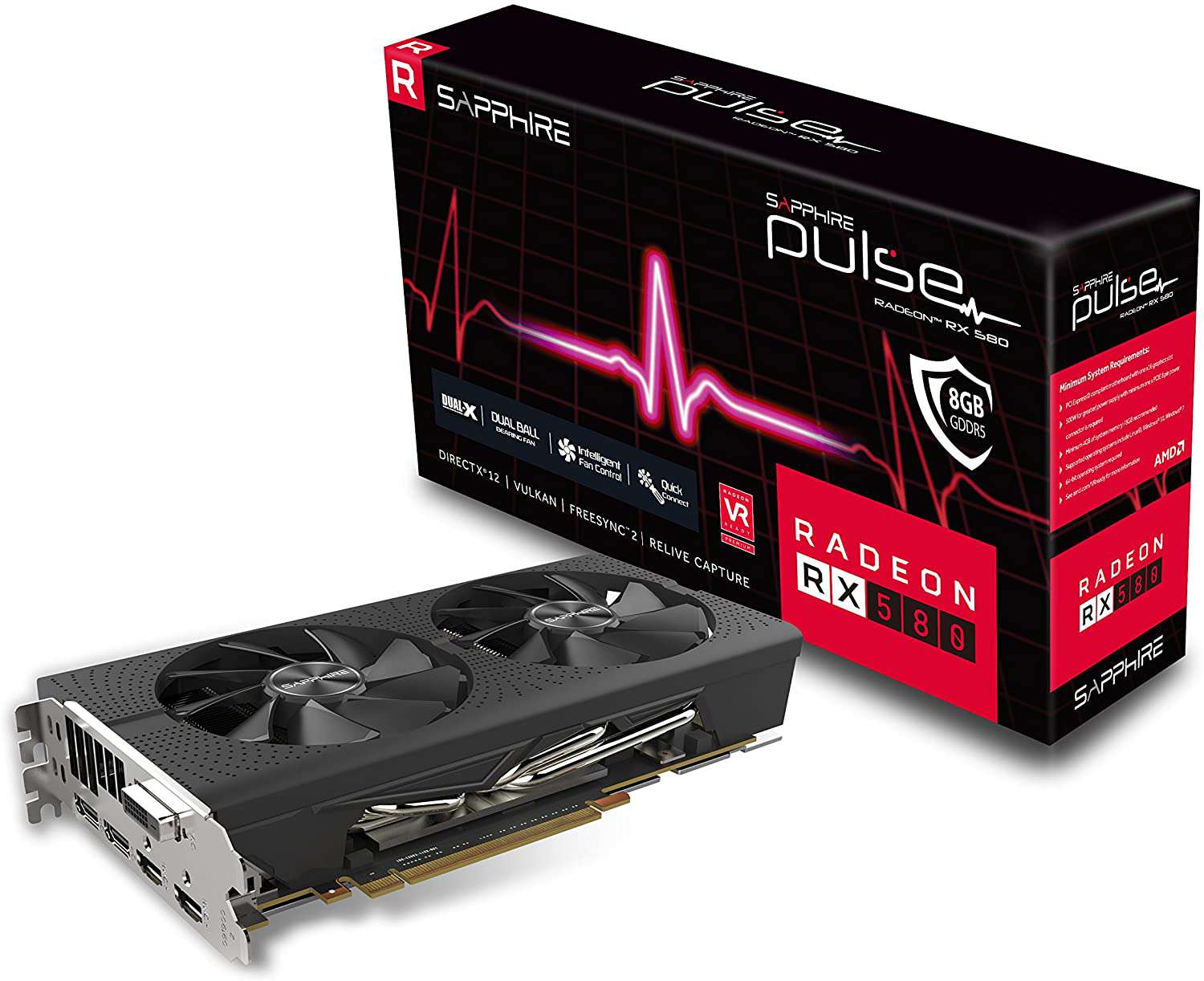 AMD cards are often a good bet for value for money, and Sapphire's Radeon Pulse RX580 is no exception. This inexpensive card packs in 8GB of VRAM, which is important for more modern games with higher VRAM requirements and graphically intensive applications. This also makes it an attractive budget card for VR gaming. It’s capable of running games in 1440p at up to 60fps, though it isn’t up to the task of 4K gaming. There are plenty of ports, and this card supports up to five displays.

If you’re looking to build a dual GPU setup, this RX580 is well suited to that task by way of AMD Crossfire and can use AMD XConnect to be used as a portable external GPU to supercharge your laptop. Additionally, this card supports AMD Freesync, which reduces screen tearing. 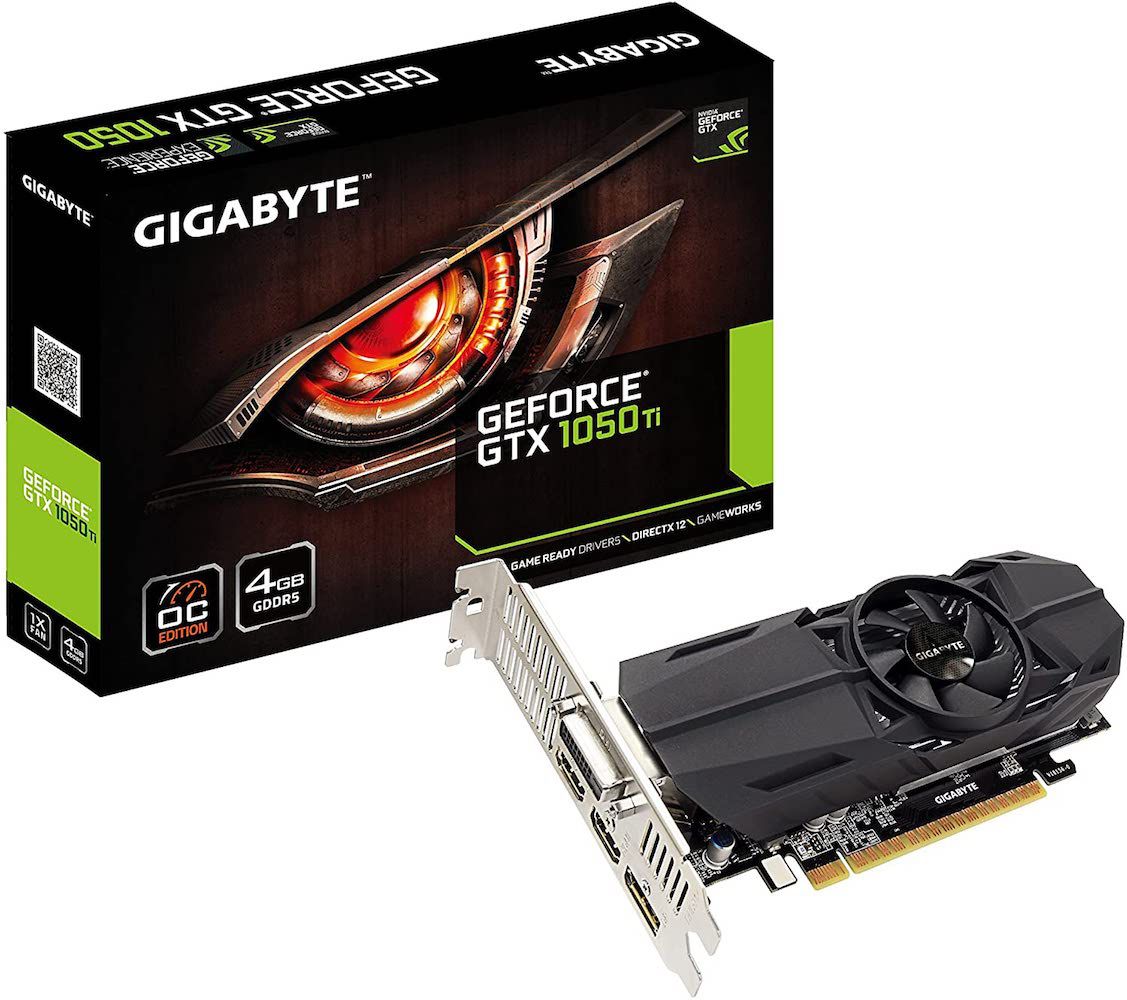 If you’re building a truly tiny PC, the Gigabyte GeForce GTX 1050 Ti Low Profile is as small as you can expect a card of this caliber to be. It’s a bit old, but it’s still a top contender for low profile gaming PC builds. With 4GB of VRAM and generally low power, don’t expect to game at better than moderate settings in modern games in 1080p resolution. However, this card is small but mighty, featuring overclocked and gaming modes that let you boost up to 1442MHz, with included software that helps to simplify this process.

As small as this card is, you still get a good selection of ports, including a display port, DVI, and two HDMI inputs. It also supports Nvidia G Sync with compatible displays for a smoother gaming experience.

Our top pick for an Nvidia card, the MSI GTX 1660 Super (view at Amazon), offers about the best performance you can expect for a graphics card under $250. If you want more bang for the buck, but slightly less power overall, the MSI Radeon RX 5500 XT (view at Amazon) is an excellent option that has even less of an impact on your wallet.

Andy Zahn has been writing for Lifewire since 2019, and is a life-long PC gamer and computer technology enthusiast who builds his own gaming rigs from scratch. Andy pushes his hardware to the limit with the latest games and graphically intensive photo and video editing software.

Taylor Clemons has over three years of experience writing about games and consumer technology. She has written for IndieHangover, GameSkinny, TechRadar, and her own publication, Steam Shovelers.

David Beren is a tech writer with more than 10 years of experience, with a background in PC hardware, mobile devices and consumer tech. He's previously written for tech companies like T-Mobile, Sprint, and TracFone Wireless.

What to Look for in a PC Video Card

When comparing two similar cards, look at the onboard VRAM. You can get by with 2GB for many games, but you’ll have a better experience with 4GB. Some cards on our list even come with 8GB of VRAM. If it comes down to a choice between a faster GPU or more memory, go with the faster GPU as long as it has at least 2 or 3GB of VRAM.

If you built your own gaming rig in a full-sized tower case, you don’t need to worry about the physical size of your video card. If you’re upgrading a pre-built system that’s in a smaller case, look for a low-profile card that pulls under 75 watts of power.

If it’s time to upgrade your video card, why not go with one that’s powerful enough to run a VR headset? Oculus, Vive, and Windows Mixed Reality all have different minimum requirements, but each one has a variety of compatible options.