See our selection of the top PC sound cards for audio, gaming and more

For a vast majority of users these days, computers aren't just productivity-focused tools, but also entertainment-centric gadgets. They are used for listening to music, watching videos, and even playing games. Perhaps this is why a great sound card is essential for any modern-day PC. Although the basic onboard solutions found in most PCs get the job done, you need a dedicated sound card to take your computer's audio experience to the next level. It's even more important if you use your setup for specialized tasks such as competitive gaming or music production. These expansion cards usually come with features like integrated amplifiers, DACs for encoding/decoding audio, and a diverse range of I/O and connectivity options.

Choosing the right sound card for your system can be a daunting task, since there are dozens of them out there. To help you out, we've detailed some of the finest PC sound cards/amplifiers in the market. Among these are PCIe-based options (best suited for desktops) such as ASUS Essence STX II, as well as USB-powered models (ideal for laptops, and even gaming consoles) like Creative Sound BlasterX G6. Read all about them, and make an informed decision! 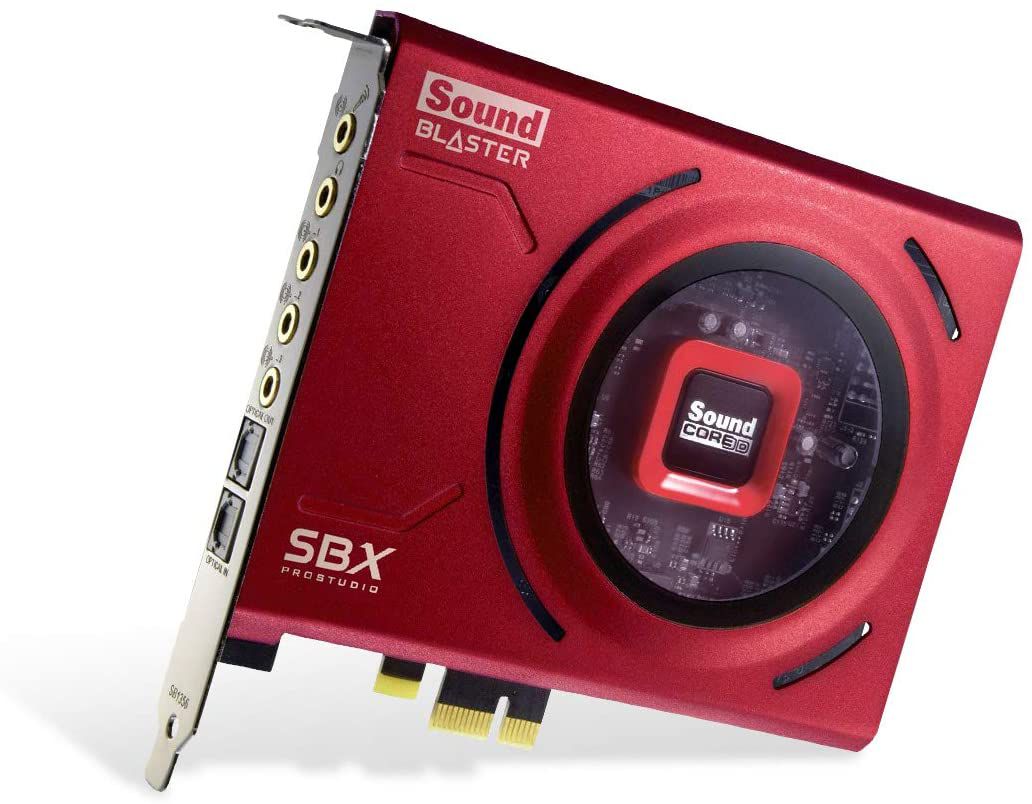 Offering a plethora of features at a reasonable price, Creative's Sound Blaster Z is easily among the best PC sound cards you can buy. It comes with a Signal-to-Noise Ratio (SNR) of 116dB and can output audio at 24-bit/192kHz, allowing you to enjoy high-resolution music in all its glory. There's also Audio Stream Input/Output (ASIO) support for reduced audio latency, and the card's dedicated "Sound Core3D" audio processor works great for enhancing the overall sound/voice quality without taxing the computer's primary CPU. As far as connectivity and I/O are concerned, the Sound Blaster Z sports a total of five gold-plated 3.5mm audio ports and two TOSLINK ports, so you can connect everything from headphones to home theater system(s) and enjoy high-fidelity immersive digital audio. The PCIe sound card also comes bundled with a beamforming microphone that suppresses outside noise and creates an acoustic zone, thus resulting in improved voice clarity. 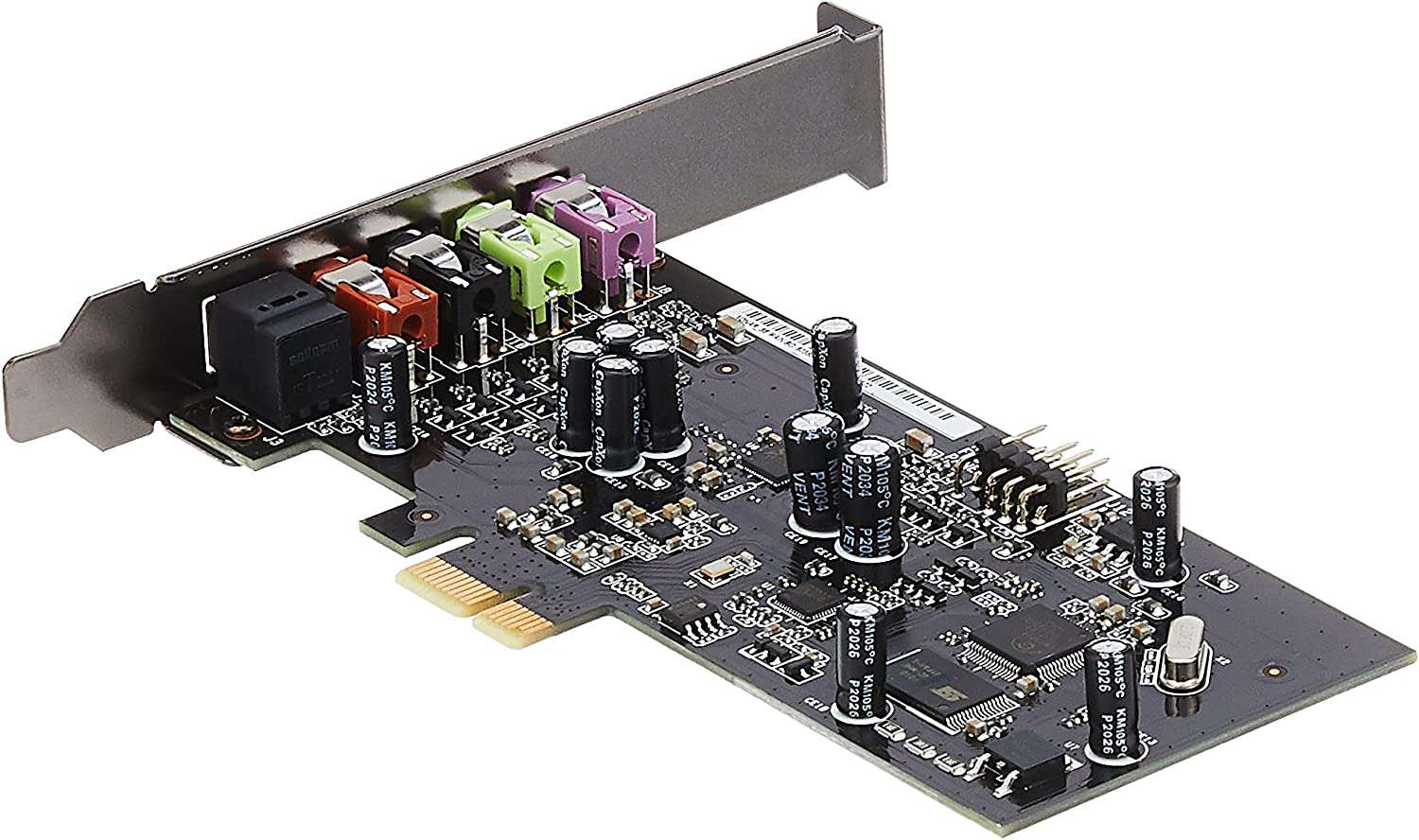 Not everyone can (or wants to) spend a fortune on top-tier computing hardware, and if that includes you, ASUS' Xonar SE is just what you need. This budget PC sound card features a Signal-to-Noise Ratio (SNR) of 116dB and supports high-resolution audio playback (5.1 channel) at up to 24-bit/192kHz. Apart from that, its integrated 300ohm headphone amplifier makes for an immersive sound output with well-defined bass.

The card is manufactured using exclusive "Hyper Grounding" fabrication technology, which reduces distortion/interference and ensures better signal insulation. Talking about connectivity and I/O options, the Xonar SE includes four 3.5mm audio ports, one S/PDIF port (with TOSLINK), as well as a front audio header. The PCIe sound card is powered by a Cmedia 6620A audio processor, and comes with a low-profile bracket that allows it to be installed in smaller cases without any issues. Its audio parameters (e.g. equalizer profiles, level balancing) can be easily configured via the companion software application. 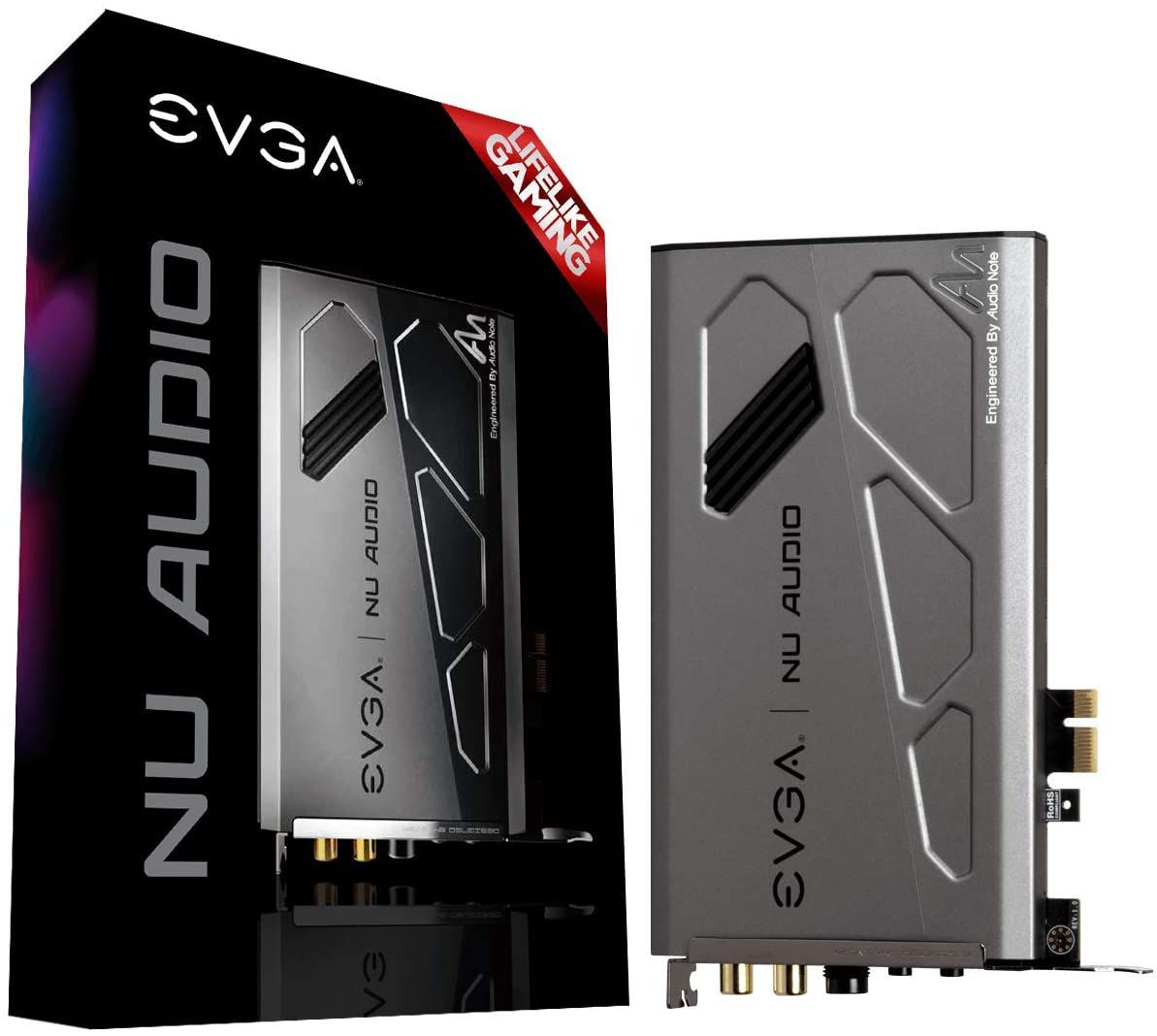 If you're on the hunt for a powerhouse sound card for your gaming rig, look no further than EVGA's NU Audio 712-P1-AN01-KR. Boasting customizable 10-mode RGB lighting that reacts to audio output, this thing looks as amazing as it works. It has a Signal-to-Noise Ratio (SNR) of 123dB, and supports high-quality audio recording/playback at up to 32-bit/384kHz. Made from premium components such as the AKM AK4493 Digital-to-Analog Converter (DAC), the XMOS xCORE-200 Digital Signal Processor (DSP), as well as audio-grade capacitors and resistors, the PCIe sound card delivers incredibly clear and immersive sound quality.

For connectivity and I/O, you get two 3.5mm audio ports, a 6.3mm audio port, RCA L/R ports, and an S/PDIF (with TOSLINK passthrough) port. The NU Audio 712-P1-AN01-KR features a 16-600ohm headphone amplifier (with independent analog control), and its companion software program lets you configure everything from virtual surround to equalizer settings with little to no effort. 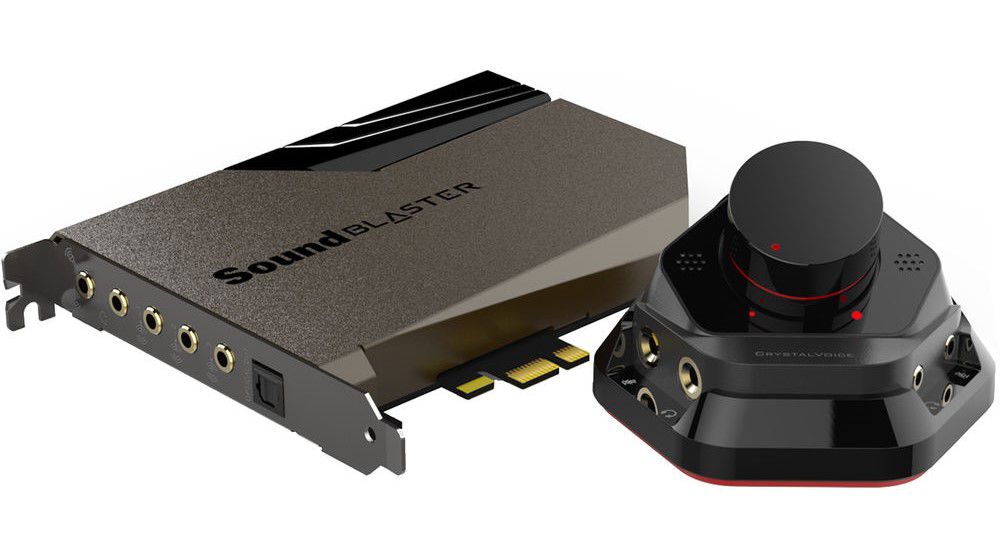 Hands down one of the most powerful PC sound cards available out there, Creative's Sound Blaster AE-7 boasts a Signal-to-Noise Ratio (SNR) of 127dB and supports 32-bit/384kHz audio playback. There's also an integrated 600ohm headphone amplifier, working alongside the ESS SABRE-class 9018 Digital-to-Analog Converter (DAC) to output rich (5.1 channel for speakers and 7.1 channel for headphones) surround sound.

However, the card's best feature is its companion "Audio Control Module" unit, which allows you to effortlessly adjust the volume level using a convenient knob. In addition to that, it also has a built-in microphone array, two 3.5mm audio ports, and two 6.3mm audio ports for hassle-free I/O and connectivity. Speaking of which, the Sound Blaster AE-7, itself, comes with five 3.5mm audio ports and a TOSLINK port. The PCIe sound card is powered by a dedicated "Sound Core3D" audio processor, and you can adjust a wide array of settings (e.g. recording resolution, encoding format) via its companion software utility. 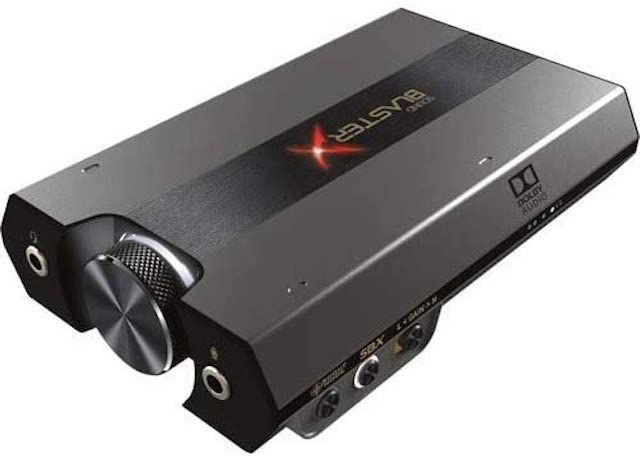 Even though internal sound cards work great, they are limited only to PCs because of their PCIe expansion bus interface. However, that's not an issue with Creative's Sound BlasterX G6, as it's powered via USB. This essentially means that, in addition to laptops and desktops, you can also hook it up to gaming consoles like Xbox One, PlayStation 4, and Nintendo Switch. Featuring an integrated Digital-to-Analog Converter (DAC) and a Signal-to-Noise Ratio (SNR) of 130dB, it supports 32-bit/384kHz high fidelity audio.

The external sound card also includes a discrete 600ohm headphone amplifier, which amplifies both audio channels individually. In terms of connectivity and I/O options, the Sound BlasterX G6 comes with two 3.5mm audio ports, two Optical TOSLINK ports, and a microUSB port. You get a single side-mounted dial for easily controlling both gameplay audio and mic volume, and the companion software program can be used to adjust everything from Dolby Digital effects to noise reduction settings.

View On Amazon View On Adorama.com View On B&H Photo Video
What We Like
What We Don't Like

Measuring around 3.14 x 1.93 x 0.82 inches and weighing just 2.75 ounces, FiiO's E10K is small enough to fit in the palm of your hand. But don't let that compact size fool you, as this thing is absolutely wonderful. It's worth mentioning here that it's not a sound card, but a portable Digital-to-Analog Converter (DAC) that can decode 24-bit/96kHz high-resolution audio without breaking a sweat. This is made possible by its new PCM5102 chip, which enhances the internal digital filter's linearity for superior sound output.

You also get a Signal-to-Noise Ratio (SNR) of 108dB, while the new LMH6643 op-amp inside turns the unit into a 150ohm headphone amplifier. As far as I/O and connectivity go, the E10K comes with two 3.5mm audio ports, a coaxial audio port, and a MicroUSB port. Some other noteworthy features include a convenient volume control dial and a slim aluminum case with a brushed metal finish.

Even though all of the PC sound cards detailed above are awesome in their own right, our top pick is Creative's Sound Blaster Z. Despite having a modest price tag, it offers numerous features like ASIO support, hi-res audio output, and even a dedicated audio processing chip. If you'd rather have something that's a bit simpler to use and doesn't require opening your PC's tower, go for Creative's Sound BlasterX G6 (view at Amazon). It works with not just computers (both desktops and laptops), but also modern gaming consoles.

As a technology journalist with more than seven years (and counting) of experience in the field, Rajat Sharma has tested and reviewed dozens of gadgets over the course of his career so far. Before Lifewire, he has worked as a senior technology writer/editor with two of India's biggest media houses - The Times Group and Zee Entertainment Enterprises Limited.

What to Look for in a PC Sound Card

Channels - A lot of decent, budget-friendly sound cards typically support 5.1 channel audio, but you can spend a little more to get one that can handle 7.1 surround sound. Some are even capable of upmixing 5.1 channel audio to 7.1, which is great if your headphones support 7.1 channels and your audio sources don’t.

Connectivity - Look for a sound card that has the jacks you need to plug in all of your equipment. Basic sound cards have 3.5mm jacks that work fine with most headphones and headsets, but look for one with RCA jacks or a TOSLINK optical connection if you’re hooking up to audio equipment that requires those types of connections.