We Tested the Best Outdoor Projectors—These Are Our Top Picks

Enjoy movie night outside with the family

The best outdoor projectors provide the same high quality image as their indoor counterparts, with exceptional contrast ratios and brightness to match some of the more trying conditions outside. The main things to consider when picking one is brightness, which determines how dark a setting has to be to see the image, throw distance (how far away the projector can be), and resolution.

Most of the choices on our list could easily double as indoor projectors as well, so if you don't want to spend a bunch of money buying a pair of projectors, one for each use case, our selections have you covered. Read on to see the best outdoor projectors to get. 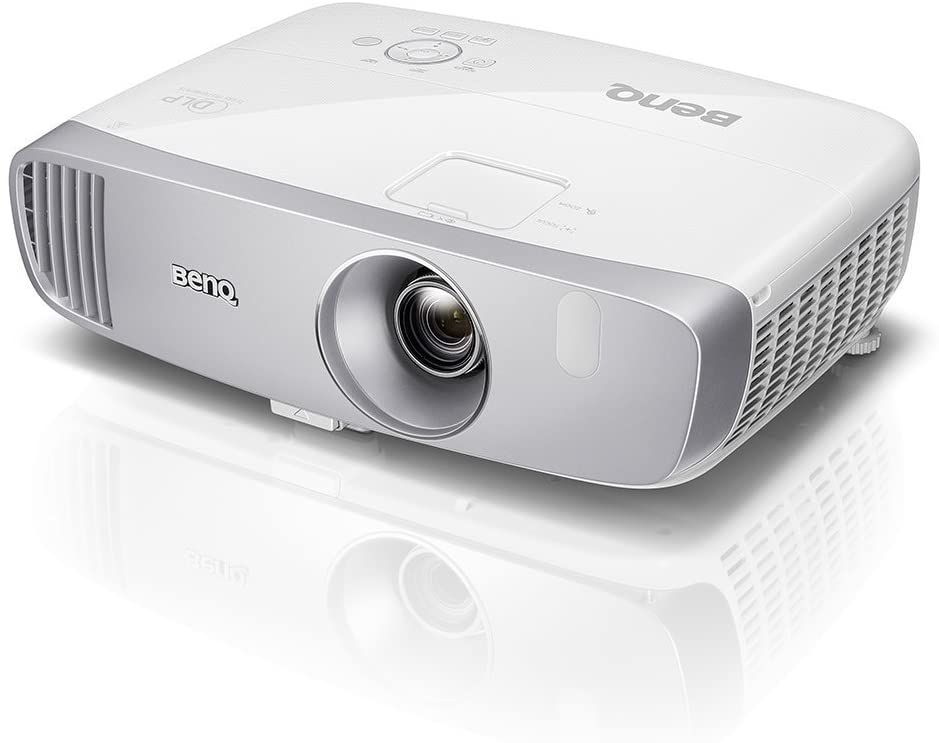 BenQ's HT2050A is one of those rare projectors that manages to have exceptional image quality without completely breaking the bank. With best-in-class contrast ratios, brightness, and color accuracy, plus native HD resolution, you're pretty much guaranteed a quality viewing experience no matter where you decide to set your projector up. Our reviewer was able to use it both indoors and outdoors, though she pointed out that it's not a petite device and takes up a fair amount of space on a coffee table or mounted to the wall.

There's a single 10W speaker that's louder than that found in much of the competition, and should be enough for most outdoor uses. If not, there's a standard audio out jack, to go along with the HDMI, USB inputs, VGA, and component inputs. An inexpensive dongle adds wireless support for streaming from a phone or tablet as well.

You can happily watch 3D movies with the HT2050A as well — it's not quite as good for this as our Optoma top pick, but you're very unlikely to be disappointed with the result regardless.

Unlike much of the competition, it includes true vertical lens shift (rather than the inferior software-driven version). The lamp will last up to 6,000 hours depending on which projection mode you use, although official replacements aren't cheap.

"At 8 feet away from the projection surface the BenQ delivers a beautiful 100-inch image, and really captures the feeling of big-screen theater entertainment." — Hayley Prokos, Product Tester 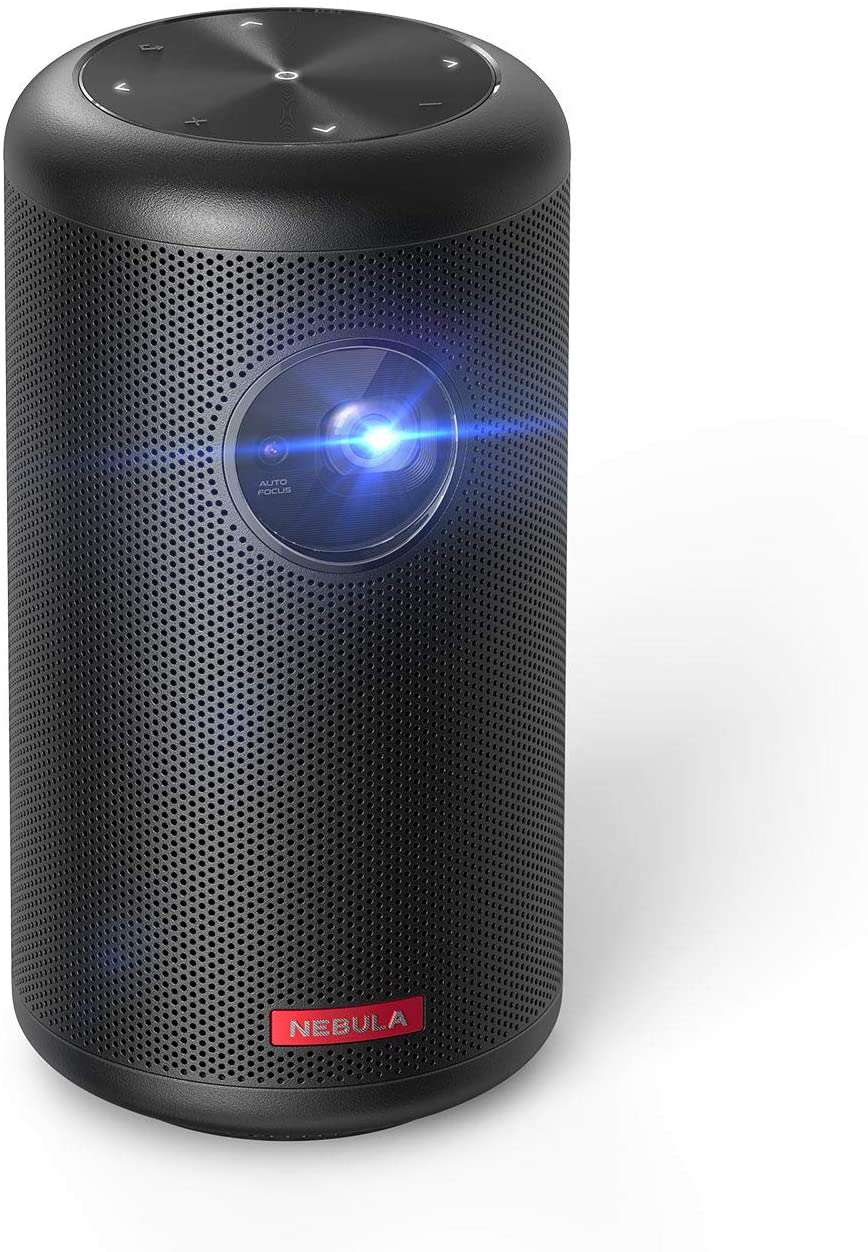 View On Amazon View On Walmart View On Seenebula.com
What We Like
What We Don't Like
Anker Nebula Capsule II Review

As far as grab-and-go solutions are concerned, Anker has one of the best bets in the projector game for a few reasons. The first generation introduced the concept pretty well, but the Capsule II steps up the specs just enough to be considered in the modern landscape. For starters, the resolution is now 1280x720 — which Haley didn't find mind-blowingly sharp, but definitely better than the 480p resolution offered by the Capsule I. You might also find the brightness a tad lacking with 200 lumens, but that’s almost double what the first generation offers.

What you get with this device is truly portable entertainment, from the 8-watt built-in speaker all the way down to the 2.5-hour battery life — a figure that’s pretty impressive considering how many pixels this thing is pushing. But what’s truly impressive about this standalone media device is its built-in app functionality. There’s Android TV compatibility right on-board, and Anker has even loaded in a Chromecast so that you can stream media via more than 3600 apps from your phone, tablet, or computer. This comes in handy whether you’re taking the device camping or just bringing it to your front yard on a nice summer night. No need for wires or a separate playback device.

"Setup is fast and easy, as the Nebula Capsule II comes loaded with a remote, a set of batteries, a quick start guide, an Anker power delivery charger, and a USB-C Cable. The remote is required to use the Google Assistant feature." — Hayley Prokos, Product Tester 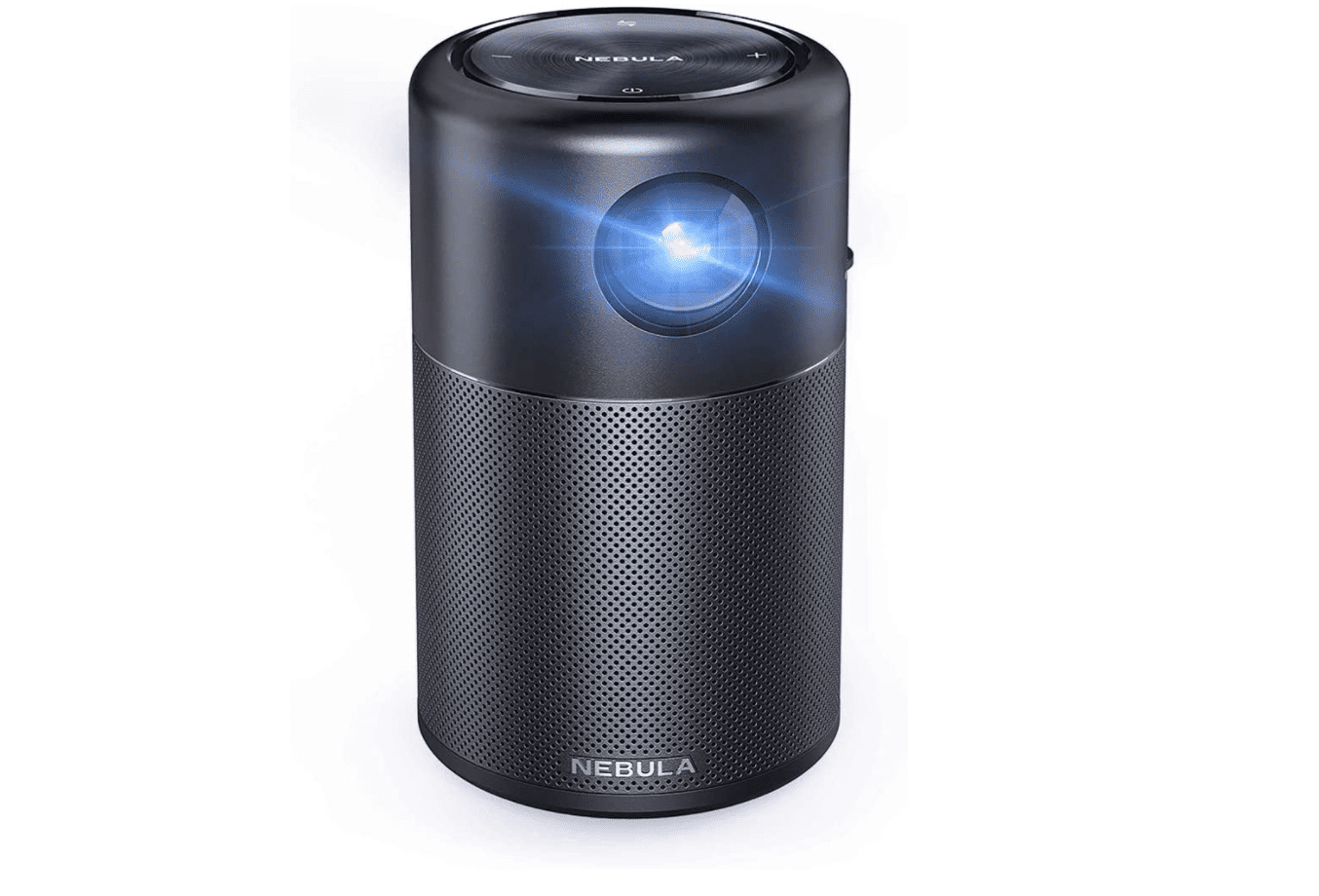 View On Amazon View On Anker View On Seenebula.com
What We Like
What We Don't Like
Anker Nebula Capsule Review

Most tiny projectors have a basic speaker or two built-in, but sound quality and volume are typically quite low. That's an issue when you're outdoors, as background noise can easily overwhelm whatever you're trying to listen to.

Our reviewer didn't find any such problem with Anker's Nebula Capsule, however, as a quick glance suggests—it looks like a proper portable speaker, and sounds like one, too. In Eric's testing, the 5W omnidirectional speaker pumped out plenty of sound in all directions, while the 100-lumen, 854 x 480 display can project in sizes up to 100 inches.

At up to four hours, battery life is enough to get you through even the longest movies. Running Android, with a wide range of apps available, it's easy to play much of your favorite content directly from the projector. If not, there's always USB, HDMI, and screencasting over Bluetooth or Wi-Fi instead.

The size of a soda can and weighing about a pound, the Nebula Capsule makes for a flexible, useful, and highly-portable outdoor projector for your next camping trip.

"That omnidirectional speaker takes up a large amount of real estate on the Nebula Capsule and is used as a major selling point, including functioning as a wireless Bluetooth speaker. Unfortunately, we came away underwhelmed." — Eric Watson, Product Tester 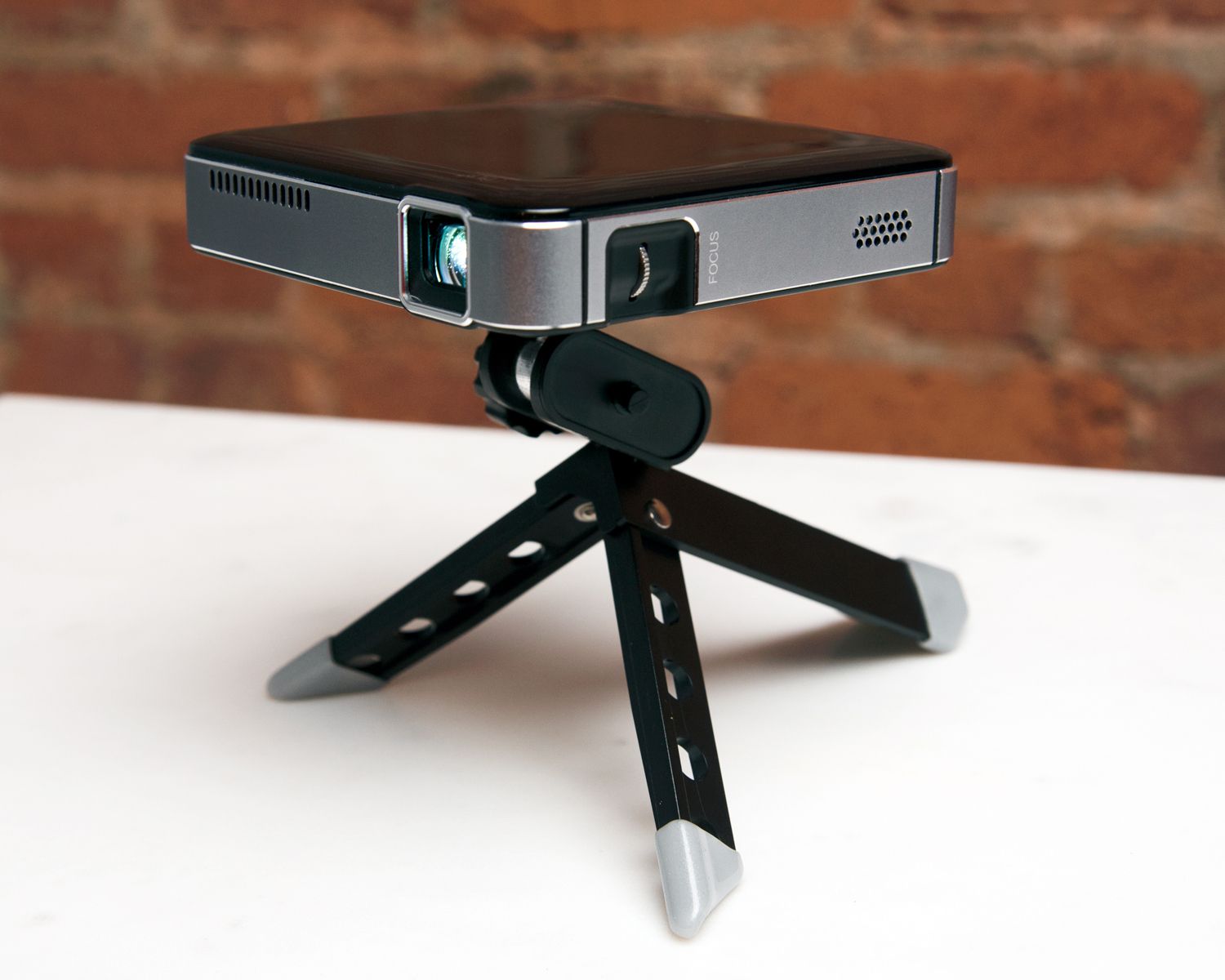 While most outdoor projectors are used in parks and yards, an increasing number of pint-sized models means you can now fit a theater in your pocket and watch movies anywhere you can find a wall, tent, or another flat surface to project onto.

The APEMAN Mini M4 is tiny, at just 3.9 x 3.9 x 0.9 inches and 1.2 pounds. According to our reviewer, it was the same surface area of a phone and a wallet, making it easy to carry around though the glossy surface picked up fingerprints and dust easily Input options are limited but sufficient—you can play from a USB stick or hard drive, or stream via HDMI. A standard ⅛-inch audio jack lets you plug in headphones or an external speaker.

While the specs sound relatively low (854 x 480 native resolution, 50 lumens, 1000:1 contrast ratio), the M4 is designed to be used within a few feet of whatever it's projecting onto, so video looks noticeably better than you'd expect.

Lasting 90 to 120 minutes on a full charge, the video projector can usefully also act as an external battery for charging your phone or another device. Both HDMI and USB charging cables are included in the box, as is a small tripod.

View On Amazon View On Adorama.com View On B&H Photo Video
What We Like
What We Don't Like
Epson VS355 WXGA Projector Review

If you're after a versatile projector with plenty of features at a reasonable price, look no further than Epson's VS355. Video looks great thanks to the higher-than-average 3300 lumens of brightness, 15000:1 contrast ratio, and WXGA (1280 x 800) native resolution, at sizes up to 320 inches.

During testing, Gannon found the projector to be equally at home in the boardroom or backyard. He didn't need a particularly dark environment to use the VS355 — it's fine even in moderate sunlight or a well-lit room. At 11.9 x 3.2 x 9.3 inches and 5.5 pounds, it's compact and lightweight enough to move around easily.

With several input options, including USB, HDMI, VGA, and others, plus an optional Wi-Fi adapter, you've got plenty of choices when it comes to playback. As with many projectors, though, the built-in speaker is relatively weak—expect to plug it into an external speaker to fill larger areas or noisy environments.

Running costs are lower than average, due to the projector's inexpensive replacement lamps that last up to 10,000 hours in Eco mode.

"From basic presentation slides to Monday Night Football and even some light console gaming, the projector held up well in a variety of environments." — Gannon Burgett, Product Tester 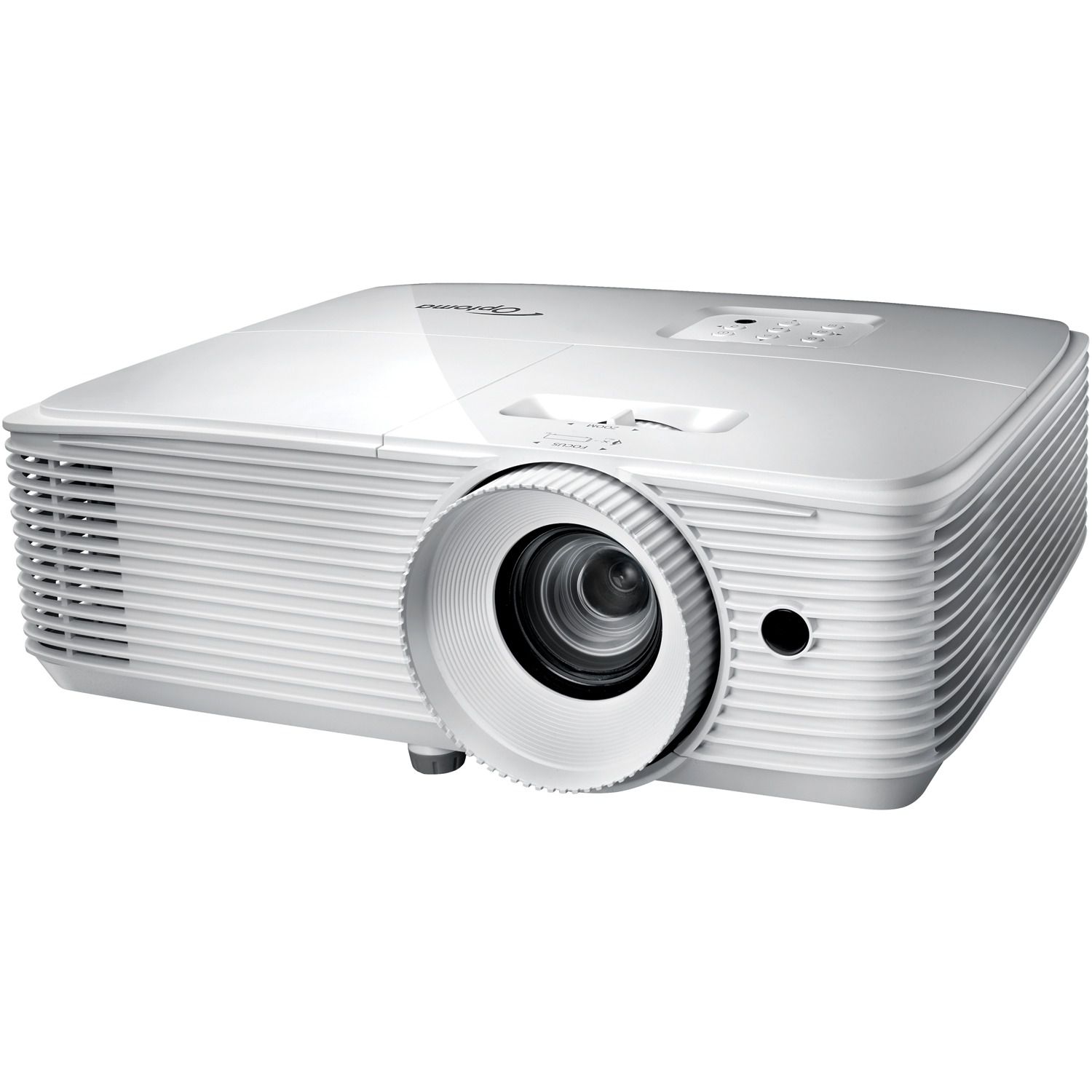 If you're after a big-screen 3D movie experience in your yard, the Optoma HD27HDR is ideal. This 3400-lumen projector is very bright, but it's the alphabet soup of other specifications that really lift it above the pack.

HDR10 ensures rich, vibrant colors, with up to 4K HDR input and HD (1920 x 1080) native resolution with another flat surface 50,000:1 contrast ratio. 3D video is supported and looks great, as long as you're wearing the company's 3D glasses (not included) and are using an appropriate HDMI cable.

You're not limited to three-dimensional movies, of course, and the HD27HDR performs admirably with normal 2D video as well. The 10W speaker puts out enough sound for many outdoor situations, but there's a standard audio output if not.

As I mentioned in the intro, the BenQ HQ2050A (view on Adorama) is an exceptional projector that works as well (and produces the same jaw-dropping images) outdoors as inside. For a quick, portable solution you can easily take with you on trips, however, Anker's excellent Nebula Capsule II (view on Amazon) is a versatile option.

Hayley Prokos has been writing for Lifewire since 2019, specializing in cameras, accessories, projectors, and other media devices. She put several of the outdoor projectors on this roundup to the best.

Eric Watson has more than five years of experience as a freelancer for numerous tech and gaming sites. He specializes in mobile tech, smartphones, general consumer technology, gaming, and more.

Gannon Burgett is a professional photojournalist who's been writing for Lifewire since 2018. He specializes in photo equipment, PCs, photo editing software, and general multimedia. He's previously been published in Gizmodo, Digital Trends, PetaPixel, Imaging Resource, and many others.

What to Look for in an Outdoor Projector

While most projectors can play a decent image in a dark home theater, outdoor projectors are plagued by ambient light. This makes brightness, measured in lumens, particularly important. Solid options will produce somewhere between 1,500 and 3,000 lumens, but high-end models (with 3,300 lumens or more) allow you to start watching movies before the sun even sets. Of course, even high-end models will struggle in full daylight, so at the very least you'll want to find some shade.

Throw distance refers to the distance between the projector and the image on the screen. Projectors with a short throw must sit close to the screen, whereas those with a throw of eight feet or more can sit reasonably further away. Depending on the setup of your outdoor theater, the throw distance will make a difference. By contrast, short-throw projectors don't require much space at all. They can be right up against the screen, making them practical for use in living rooms or crowded outdoor settings.

Will you be watching 4K or mostly HD? The type of video you’ll be viewing will impact the quality of resolution you need. For 4K (also known as Ultra HD), you’ll need 3840 x 2160 pixels, but for the average DVD, 800 x 480 native resolution should be just fine. A nice middle ground is 1080p, since most content supports that resolution and it's a nice, crisp step up from 480p.