We Tested the Best Netgear Routers of 2022

Connect to the Internet with this well-known networking company

Jesse Hollington
Writer
Jesse Hollington is a tech writer with 10+ years' experience. He has written for iLounge, Forbes, Yahoo, The Independent, and iDropNews, among others.
lifewire's editorial guidelines
Fact checked by
Stephen Slaybaugh

The best Netgear routers give you a stable Wi-Fi connection, good range, and can help you connect multiple devices. Netgear is a reputable manfacterer of routers and other networking device, with options ranging from the fairly standard dual-band routers, to gaming-oriented tri-band routers, and whole-home mesh networks. What you need will depend on your space, how many devices you plan to connect, and your day-to-day usage.

To get a comprehensive overview of your router options, take a look at our general roundup of the best routers. Otherwise, read on to see the best Netgear routers to get. 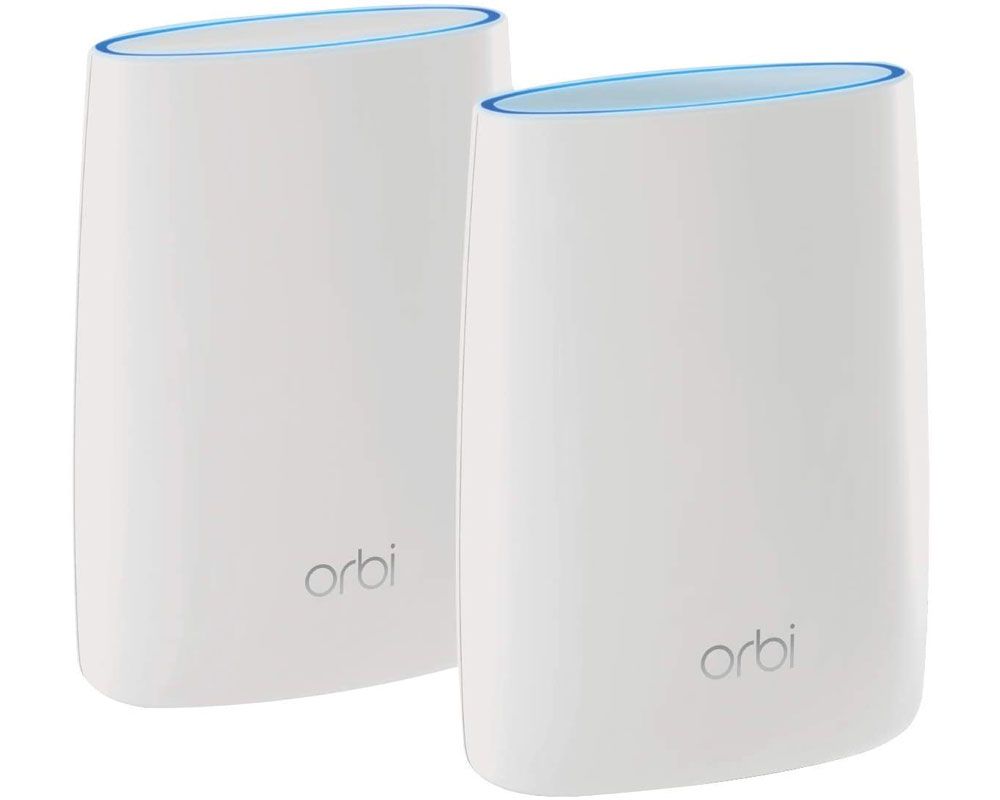 Netgear's Orbi Mesh Wi-Fi is the company's first specifically-made mesh router system, with a pair of units that act as a base station and a "satellite" unit to provide corner-to-corner coverage in up to a 5,000 square foot home. The system is really simple to set up via Netgear's Orbi smartphone app, so you can get online within minutes of plugging it in.

The tri-band coverage offers lightning-fast performance, thanks to technologies like MU-MIMO and six internal antennas, reaching speeds of up to 1,733Mbps on the 5GHz band and 833Mbps on the 2.4GHz side. The Orbi also works with Amazon Alexa voice commands and the smartphone application allows for parental controls powered by Circle. There's even the ability to set up guest Wi-Fi networks, as well as connect new devices.

"You will have a hard time finding a better wireless router than the Netgear Orbi." — Bill Thomas, Product Tester 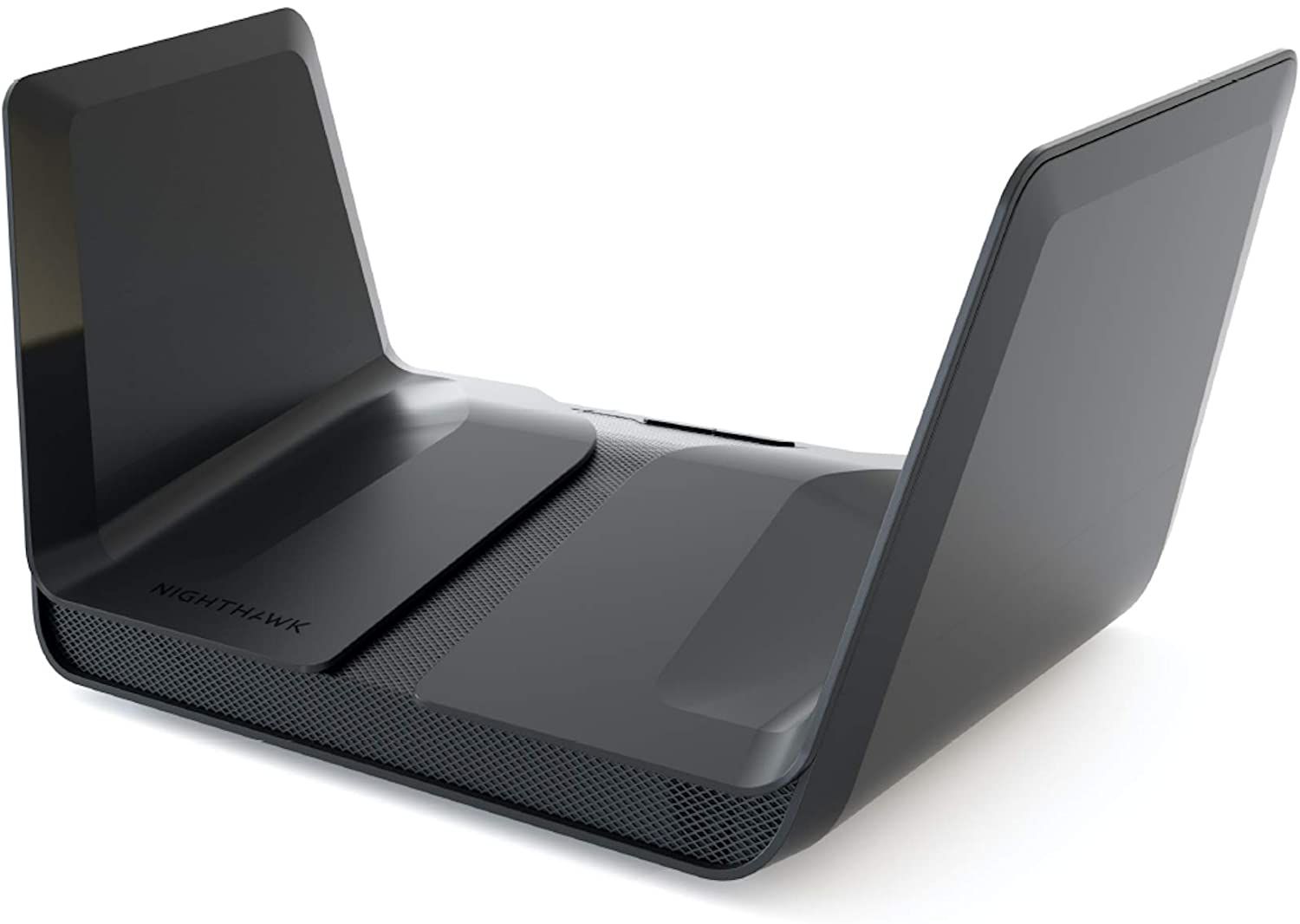 If you're looking to invest in a router that will keep you ahead of the technology curve, then you'll want a router that supports Wi-Fi 6, the newest 802.11ax standard that not only offers better performance, but also manages large device networks much more efficiently. Even if your PCs and gaming consoles aren't ready for Wi-Fi 6 yet, the RAX80 still provides up to 2,500 square feet of coverage for your 5GHz 802.11ac and older 2.4GHz devices with throughput of up to 4.8Gbps and 1.2Gbps on each of its bands, respectively, thanks to the four antennas encased in its hawk-like wings.

With support for MU-MIMO and eight simultaneous 160MHz channels, plus a 64-bit 1.8GHz quad-core CPU, more devices can use maximum Wi-Fi speeds at the same time, so you don’t need to worry about your family members or roommates slowing down your connection. It's also more than capable of handling even the more tricked-out smart homes, and thanks to WAN port aggregation, it can even handle Multi-Gig internet plans up to 2Gbps.

"Since this is a dual-band router, it has one 2.4GHz band and one 5GHz band, both of which are available at all times." — Jeremy Laukkonen, Product Tester 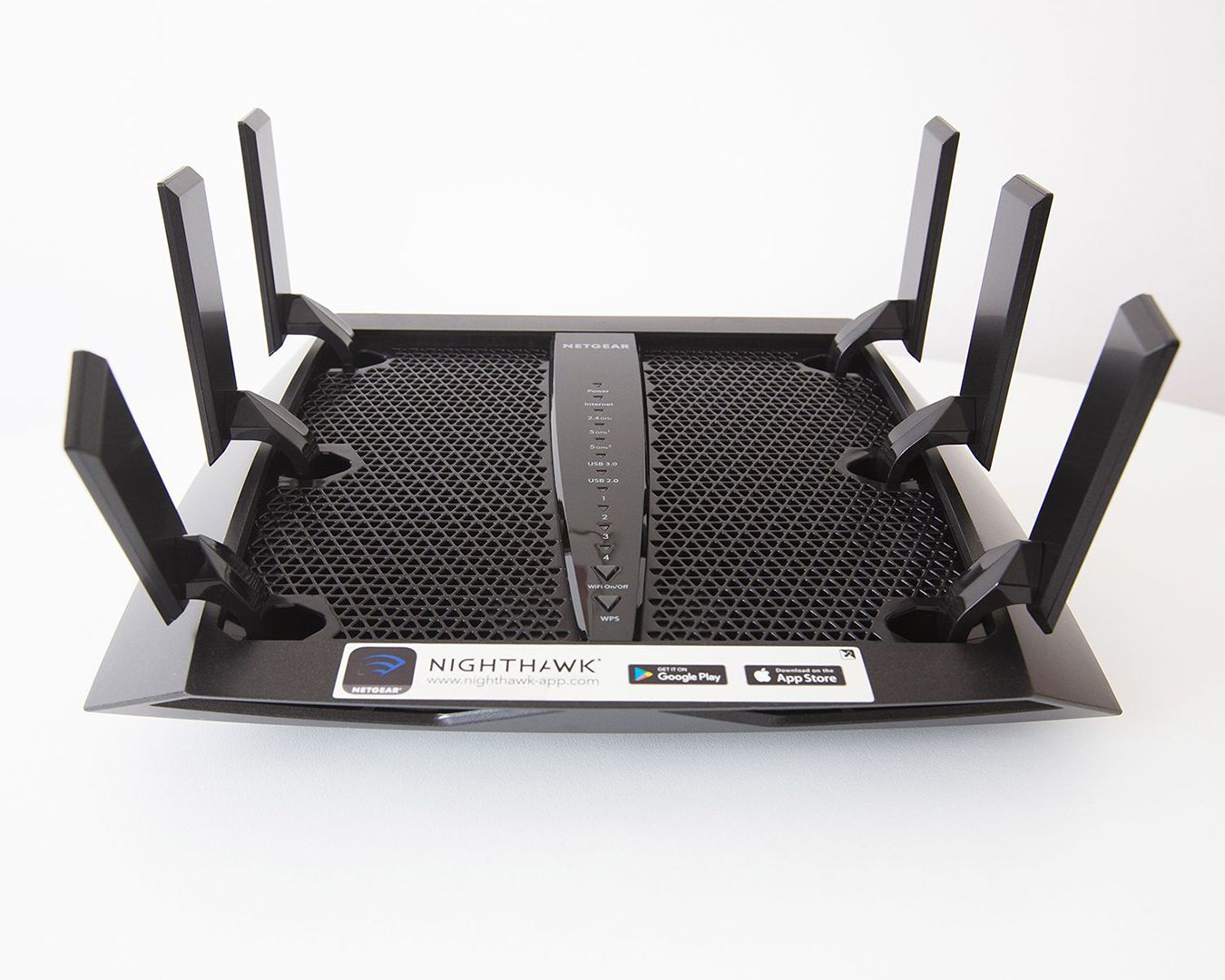 The Netgear Nighthawk X6 is integrated with Amazon Alexa for voice command prompts and features six external high-performance antennas that combine with tri-band Wi-Fi for increased performance and signal strength. A 1GHz dual-core processor works alongside three offload processors to maintain network performance, while Netgear's Smart Connect software works to allow each device to connect to the strongest signal.

Beamforming+ technology helps to improve on existing signals by directing unused bandwidth directly at each connected device. And setting up the X6 is a snap, thanks to the downloadable Netgear Up smartphone app that's available for both Android and iOS and can connect you to your home network with just a few taps. With a total speed of 3.2Gbps across the 2.4GHz and 5GHz 802.11ac bands, the X6 just smiles at online gaming or 4K streaming. 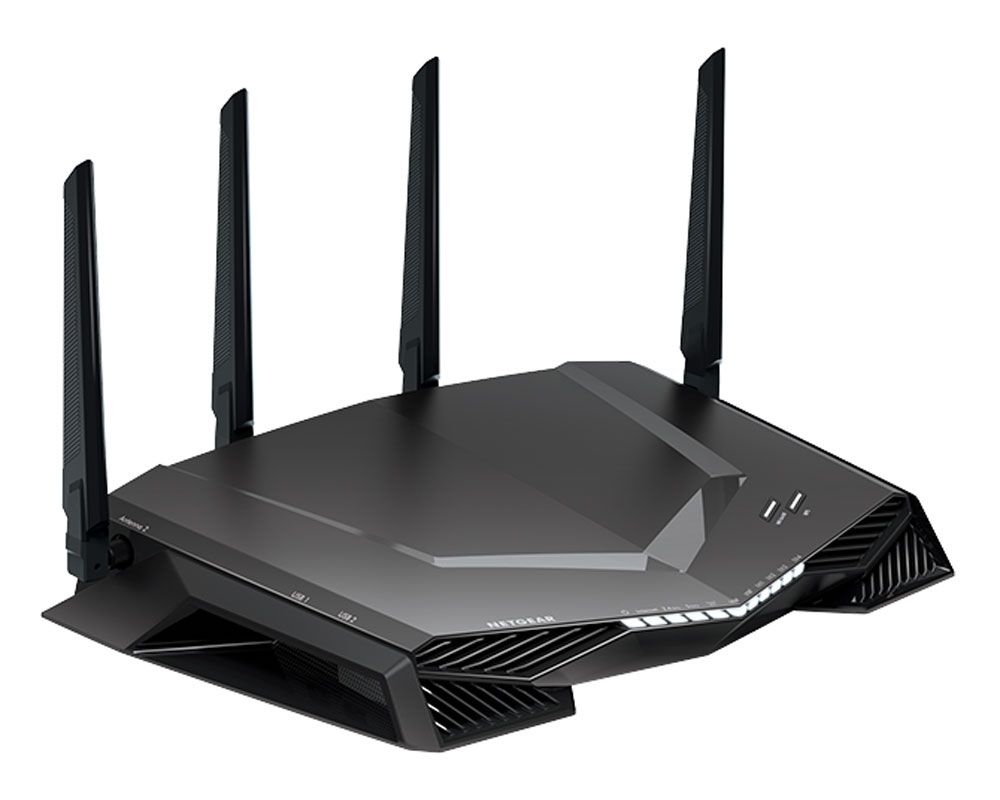 One of the best-reviewed gaming routers on the market, Netgear's Nighthawk XR500 is built specifically with gamers in mind. The hardware includes gaming-specific features such as QoS for prioritizing gaming devices on the network for the best possible signal and allocating any extra bandwidth to eliminate lag. A gaming dashboard helps to show real-time bandwidth use, so users can help minimize ping times, while a gaming VPN allows instant connection to any VPN client to maintain security and privacy.

Monitoring network strength is easy via the downloadable Netgear smartphone application and the dual-core 1.7Ghz processor helps to maintain the hardware performance and support the demands of online gaming traffic. With four external antennas for increased signal strength, the XR500 adds MU-MIMO and Quad-Stream technologies for even more of a gaming boost. Add in a total network speed of 2.6Gbps across the 2.4GHz and 5GHz bands and you've found a gaming router worthy of its price tag. 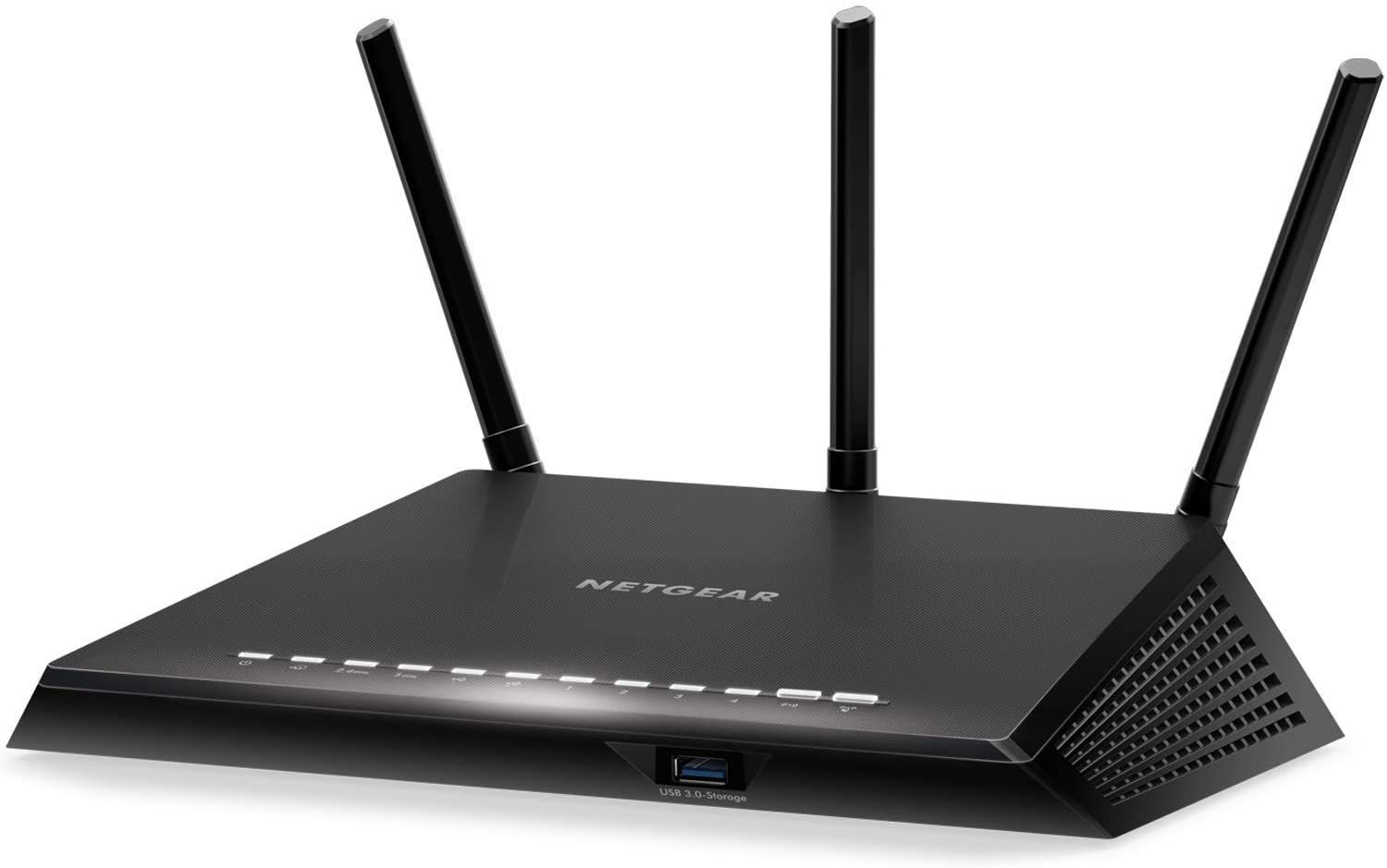 Compatible with 802.11ac, the Netgear Nighthawk R6700 provides speeds up to 450Mbps on the 2.4Ghz band and up to 1,300Mbps on the 5GHz band. Capable of simultaneously supporting up to 12 devices at a time, the Nighthawk offers an incredibly easy setup with the company’s smartphone application. There, parents can find a slew of parental controls and options to create guest networks, as well as updating the router with the latest firmware for up-to-date security and performance.

Compatible with Amazon Alexa and Google Assistant for voice command usage, the Nighthawk has a dual-core processor inside that powers the hardware to help maintain steady performance. The three external high-performance antennas can be directed toward device locations (i.e. a desktop or television) for improved signal strength and range. 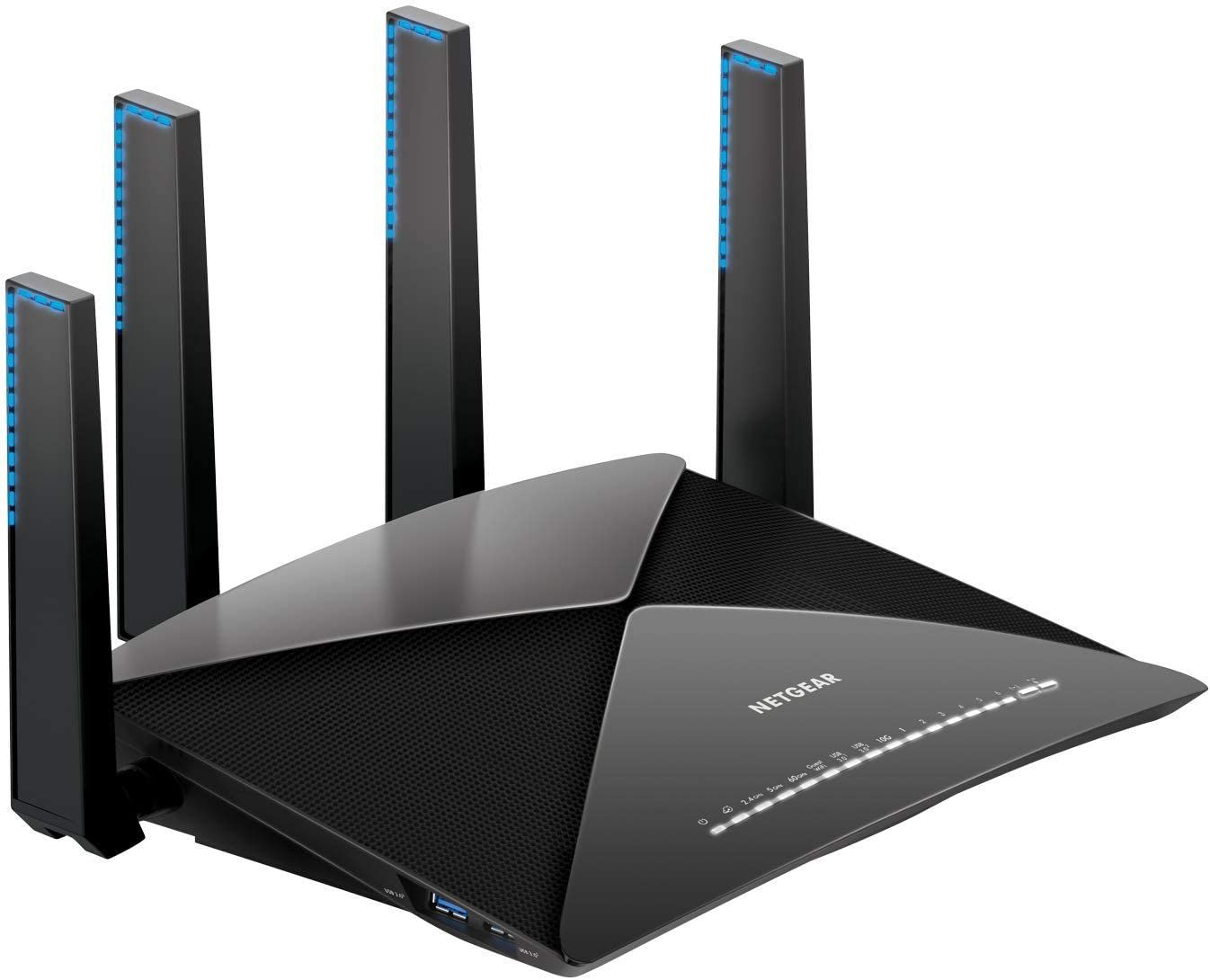 When it comes to performance for the price, the Netgear Nighthawk X10 is more than equal to the task. With eye-popping speeds, the X10 is among the fastest routers available, with 60GHz 802.11ad connectivity that allows it to reach speeds of 4.6Gbps on the 5Ghz band, while still also offering support for more common 802.11ac devices at speeds of up to 1,733Mbps. The internal hardware is driven by a quad-core 1.7Ghz processor that handles 4K streaming, VR gaming, web browsing, and pretty much anything else.

The inclusion of Dynamic QoS provides an additional performance boost by prioritizing bandwidth availability by application and directing any unused signal strength at bandwidth-heavy tasks, offering increased speeds for gaming and 4K streaming. Additional extras include MU-MIMO for supporting simultaneous connections and helping to double Wi-Fi speeds for mobile devices. The X10 also features a built-in Plex Media Server which can share media content from external hard drives connected to either of the two USB 3.0 ports or even a high-speed NAS device connected to the 10Gbps SFP+ port.

Our top choice among Netgear routers is the Netgear Orbi (view on Amazon) if you're looking for a great mesh Wi-Fi system. It's easy to set up, can cover 5,000 square feet, and has tri-band coverage, MU-MIMO, and six internal antennas. For a single router that's focused on speed, we're fond of the sleek Netgear Nighthawk RAX80 (view on Amazon). It boasts eight 160MHz channels, can cover 2,500 feet, and supports Wi-Fi 6 connectivity.

Jeremy Laukkonen has been writing for Lifewire since 2019, covering all manner of consumer tech from routers and networking devices to generators and laptops.

Bill Thomas is a Denver-based freelance writer with experience covering a wide range of tech, games, and networking devices.

Yoona Wagener has been writing for Lifewire since 2019, covering wearables, laptops, networking devices, and more.

What to Look for in a Netgear Router

The point of a wireless router is to provide a wireless network connection, but there are a lot of cases where it’s better to plug a computer, game console, or another device into an Ethernet port. Count all of the devices that you want to connect via Ethernet, and look for a Netgear router that can accommodate your setup. Most routers have four LAN ports, but if you have lots of devices to connect the alternative is to invest in an additional Ethernet switch later on. These can expand your Ethernet port options to 16 or 20. The addition of a USB port on a router can also be handy for connecting a printer, external hard drive or other devices to create sharable storage.

Unless you live in a tiny studio apartment, you’re going to need a Netgear router that comes with multiple antennas. Three is enough for most houses and small businesses, but you’ll need four or more if you have a big, multi-story house or a large office. Higher-end routers can have as many as six or eight. Generally speaking, the more antennas, the better your range and connectivity is, though that also depends on the type of router. On this roundup, the Orbi with six antennas can cover 5,000 square feet. The more budget Nighthawk R6700 has three antennas, letting it cover up to 1,500 square feet.

You can get by with a single-band router for most basic usage but look for a dual- or tri-band Netgear router if you want to connect a lot of devices at once. Some dual-band routers can provide a solid connection to up to 20 devices at once, and tri-band routers give you even more options. You'll also want to look at Wi-Fi standard. An increasing number of options support Wi-Fi 6, though Wi-Fi 5 is still a daily common standard.