The easiest way to stay connected while on-the-go

Wi-Fi hotspots or mobile hotspots easily and inexpensively connect all of your devices. Whether you want to link your phone, tablet, laptop, or another device, a hotspot prevents draining your phone’s battery while maintaining a quality internet connection. A mobile hotspot acts as an access point to the internet, so you can connect wherever you are, whenever you want. Hotspots are relatively small and portable in size, which is perfect for anyone on the go. You have the option to use your hotspot at home, while traveling, or anywhere that has spotty internet or no internet at all.

Sure, you could use your phone as a hotspot, but you'd be susceptible to disruptions when connecting to a cellular network or due to bandwidth limitations. Your phone’s data primarily is used for calls, texts, email, and various mobile applications. By using your phone as a hotspot in addition to your typical data usage, you are destined to overload and eventually kill your battery. If you want a strong connection without sacrificing your phone, a mobile hotspot is ideal!

The hotspot market has grown considerably in the past year, alone. For example, batteries have longer lifespans, 5G networks are more prevalent, download speeds are faster, and prices are reasonable. We’ve taken the guesswork out for your Wi-Fi hotspot purchase and researched the best ones available to suit your desires. 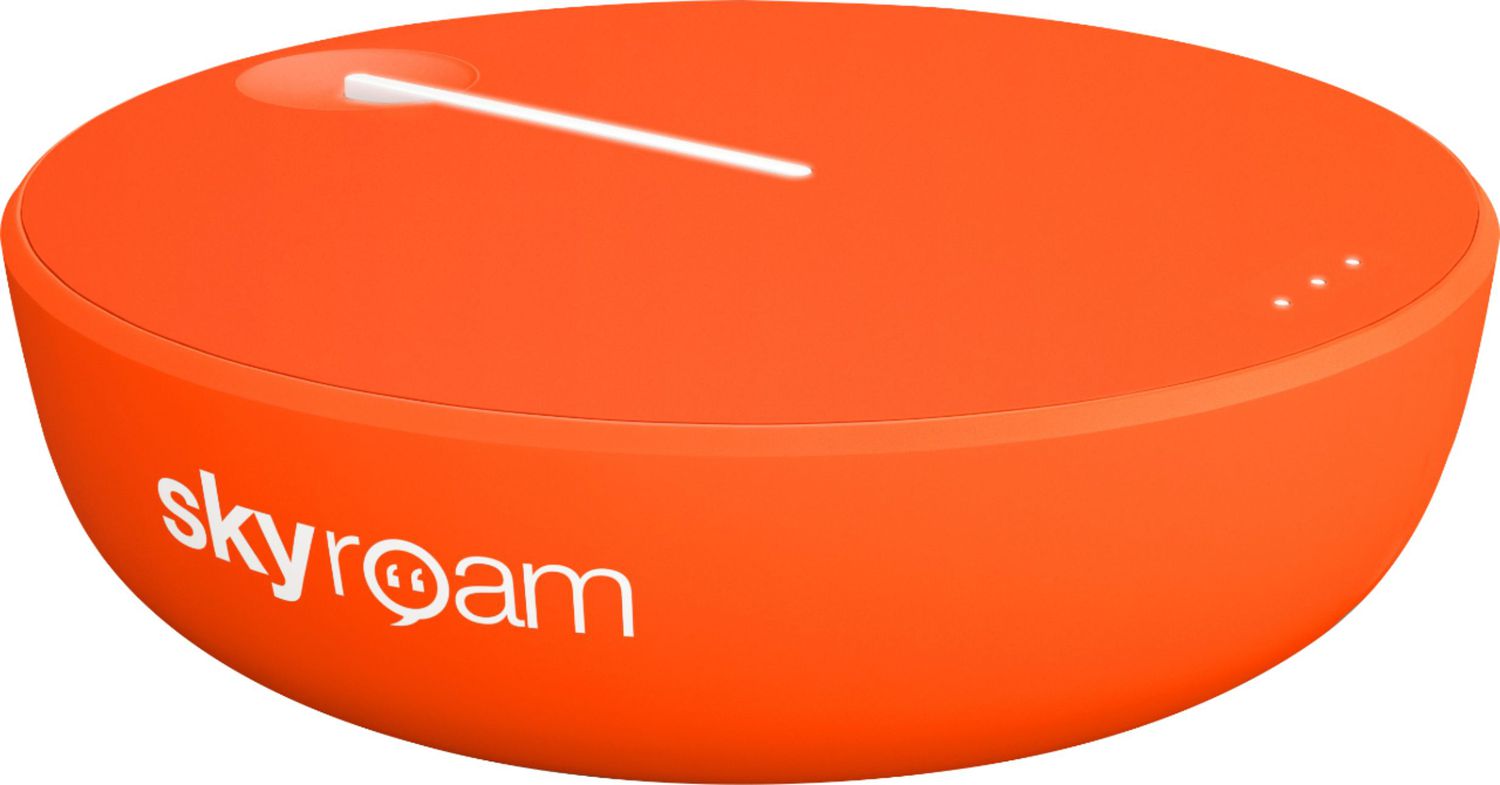 The Skyroam Solis Lite is perfect for world travelers, due to its easy setup and unlimited data. The device allows users to receive 4G LTE mobile Wi-Fi speeds in more than 135 countries. The Solis’ reach includes North America, South America, Europe, Africa, and the Middle East. While you hop from country to country, you don’t have to worry about locating and purchasing local SIM cards. Instead of a traditional SIM card, the Solis is based on the patented vSIM technology. Not only can you take this hotspot across the globe, but the unit also can connect up to 10 devices at once. With an impressive 6,000mAh power bank, the Solis provides 16 hours of battery life. While you’re working off the speedy Wi-Fi, you also can charge your mobile devices, as the unit includes a USB-C connection.

The flexibility of the network is just as flexible as the Solis’ data plans. Since Skyroam doesn’t offer contracts, users can purchase data by the day, month, or gigabyte. Plans are available for the United States and for the globe, ranging from $9/day to $99/month. If you prefer to purchase data by the gigabyte, Skyroam offers a Go Data plan, which gives users 1GB of data use per month for just $6. Many reviewers expressed that the data gets easily consumed when multiple devices are connected, or when performing data-heavy activities. Fortunately, if you need more data, you can purchase more data for only $6. For most carriers, domestic or otherwise, $6 is considerably cheaper than roaming charges. 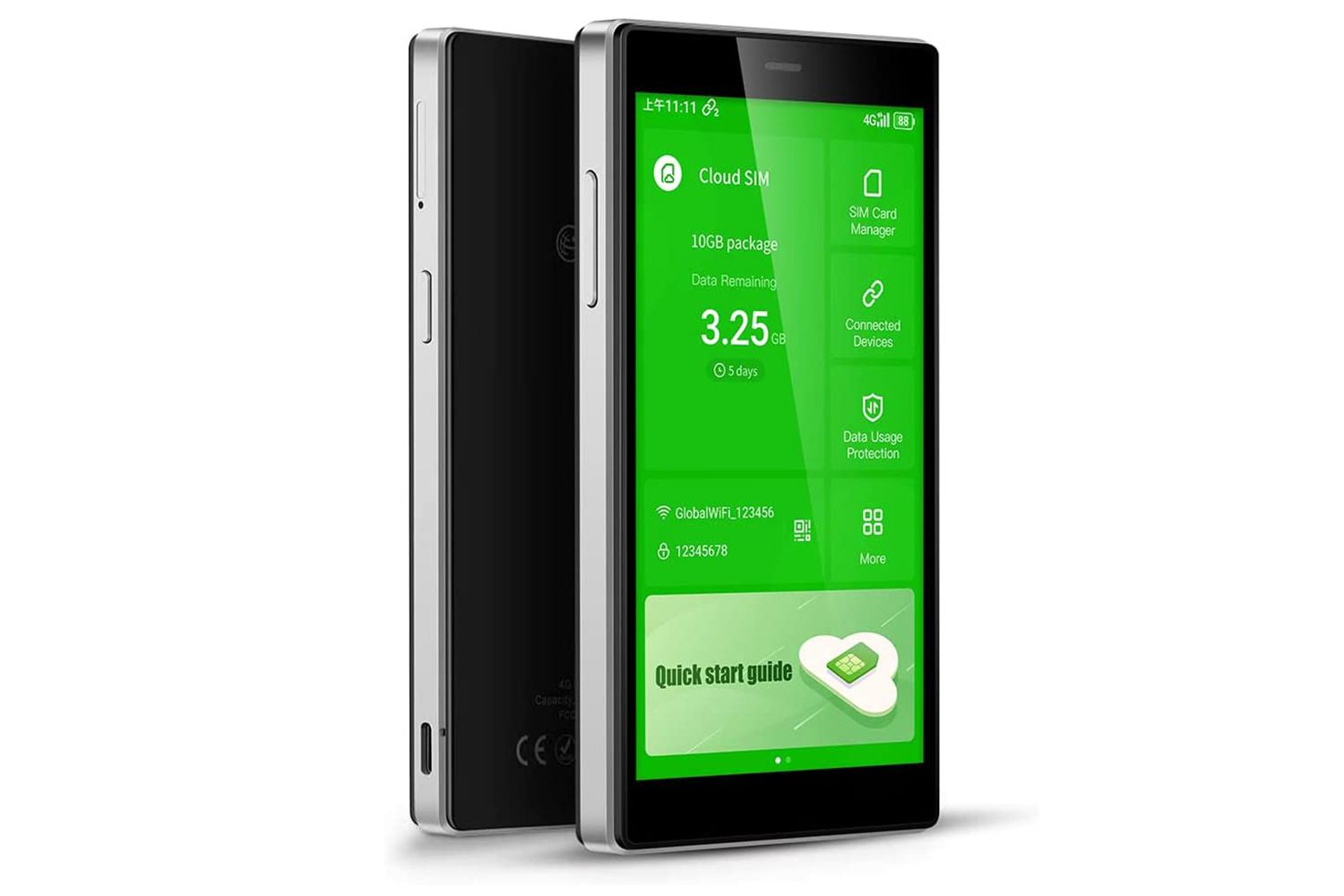 If you’re looking to travel, the GlocalMe G4 Pro 4G LTE mobile hotspot is the best way to stay connected wherever you’re located. With GlocalMe’s cloud SIM technology, travelers aren’t bound by a particular network. Specifically, hotspot users can access the internet with a local SIM card in over 100 countries. Although the hotspot is compatible with any local SIM card, GlocalMe invites travelers to use its own networks with 1GB of free data. Users are able to use that data anywhere the device has a signal.

Despite the G4’s reach, the hotspot provides only 50Mbps max upload speed and 150Mbps download speed. While the speeds aren’t the fastest available, they're enough to make calls, send texts, check emails, and peruse the World Wide Web. In addition to connecting with family and friends, users can connect up to five devices at once. 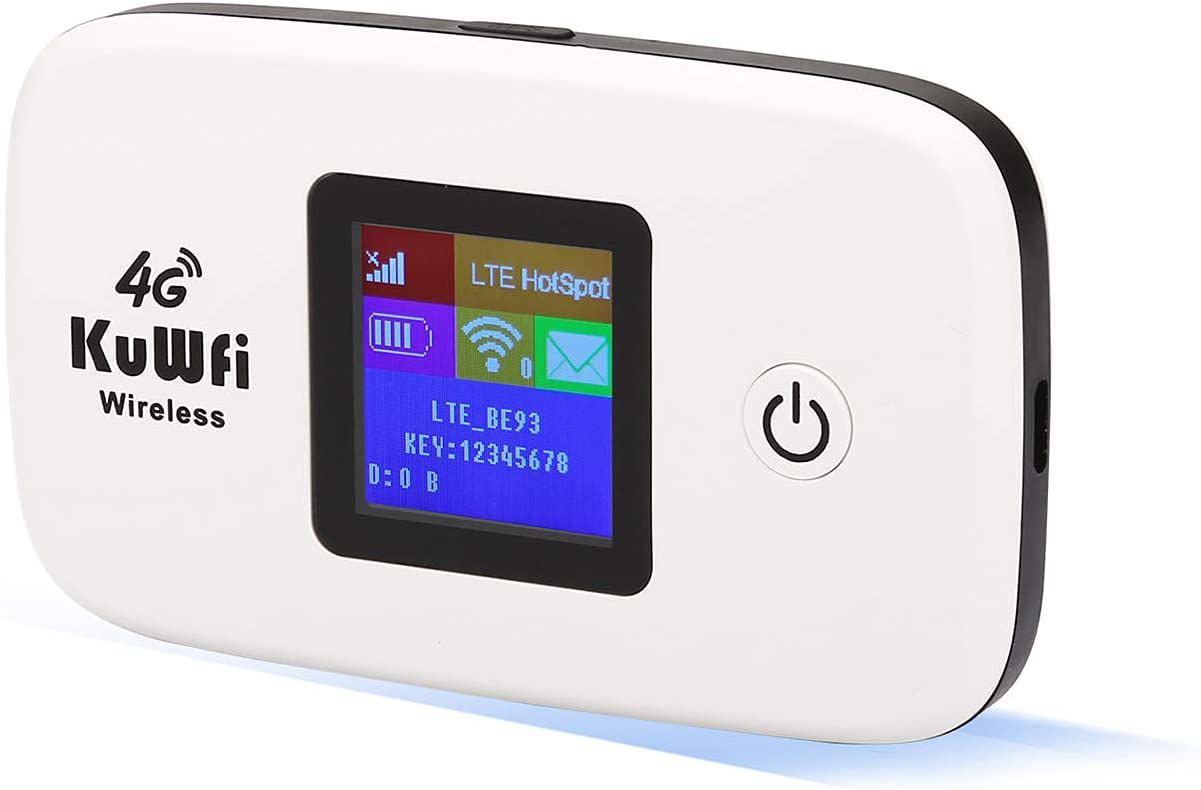 KuWFi's 4G LTE Unlocked Hotspot is one of the most economical options on the market, as it’s priced under $100. While the hotspot won’t hurt your pockets, it may not be the most pleasing on the eyes. The overall design of the KuWFi has been described as “childish” and “quirky.” Irrespective of the appearance, the hotspot is extremely versatile and provides notable browsing speeds. In particular, the unlocked KuWFi is compatible with a number of SIM cards such as 4G LTE Sprint 2500 MHz, Redzone Wireless, SpeedConnect, UScellular, and AT&T.

The KuWFi’s performance is outstanding for the price and size of the hotspot. For example, the unit connects via 802.11n, which offers peak speeds of 150Mbps. Having a KuWFi is comparable to having an entry-level, at-home router in your pocket. The hotspot is the perfect travel companion as it weighs in at 6 ounces and sports a super-slim profile. You can fit the KuWFi in your pocket, purse, or backpack without issue. Not to mention, you can connect up to 10 devices at once. While bandwidth will inevitably decrease with each device, the performance specifications are extraordinary. 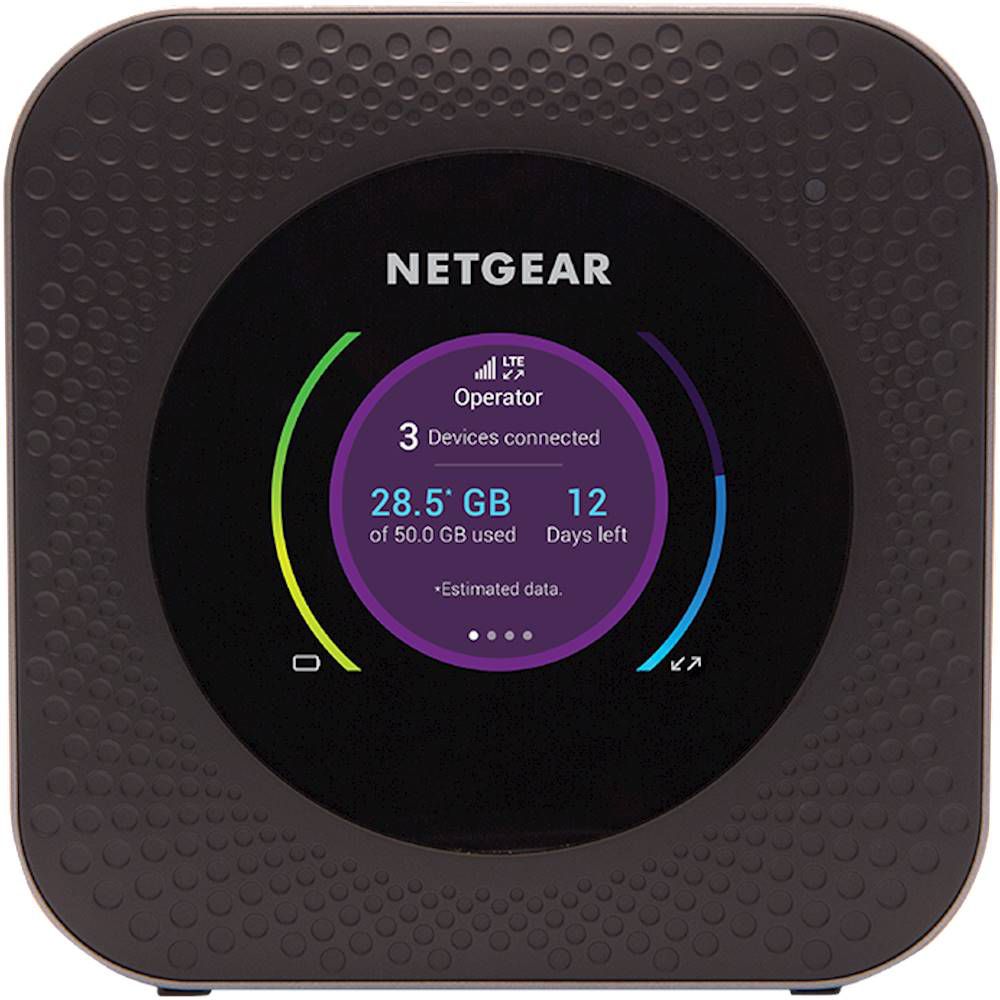 Once you get past the shock of the Nighthawk M1's price, you’ll understand that it’s worth every penny. As AT&T’s first gigabit LTE hotspot, the Nighthawk is the fastest hotspot available. In addition to speedy network connections, the hotspot doubles as a travel router and backup battery. Although referred to as a travel router, the Nighthawk is larger in size than most hotspots. The device weighs almost 9 ounces and is 4 inches in both height and width. Moreover, the display screen is clean, allowing for an easy setup.

Despite its large size, the Nighthawk runs on a 5,040mAh battery that provides a day of use. The durable battery can support up to 20 devices. To provide even greater connectivity, the Nighthawk has Ethernet and USB Type-A and -C connectors. With the inclusion of the Ethernet port, users can establish a Wi-Fi source from a wired connection. If you find yourself needing more, such as onboard storage, you can upgrade the device with 512 MB of additional storage.

To lessen the price tag's brunt, AT&T offers an install agreement. If a user signs up for a 30-month agreement, the carrier allows users to pay off the Nighthawk for less than $9 per month. 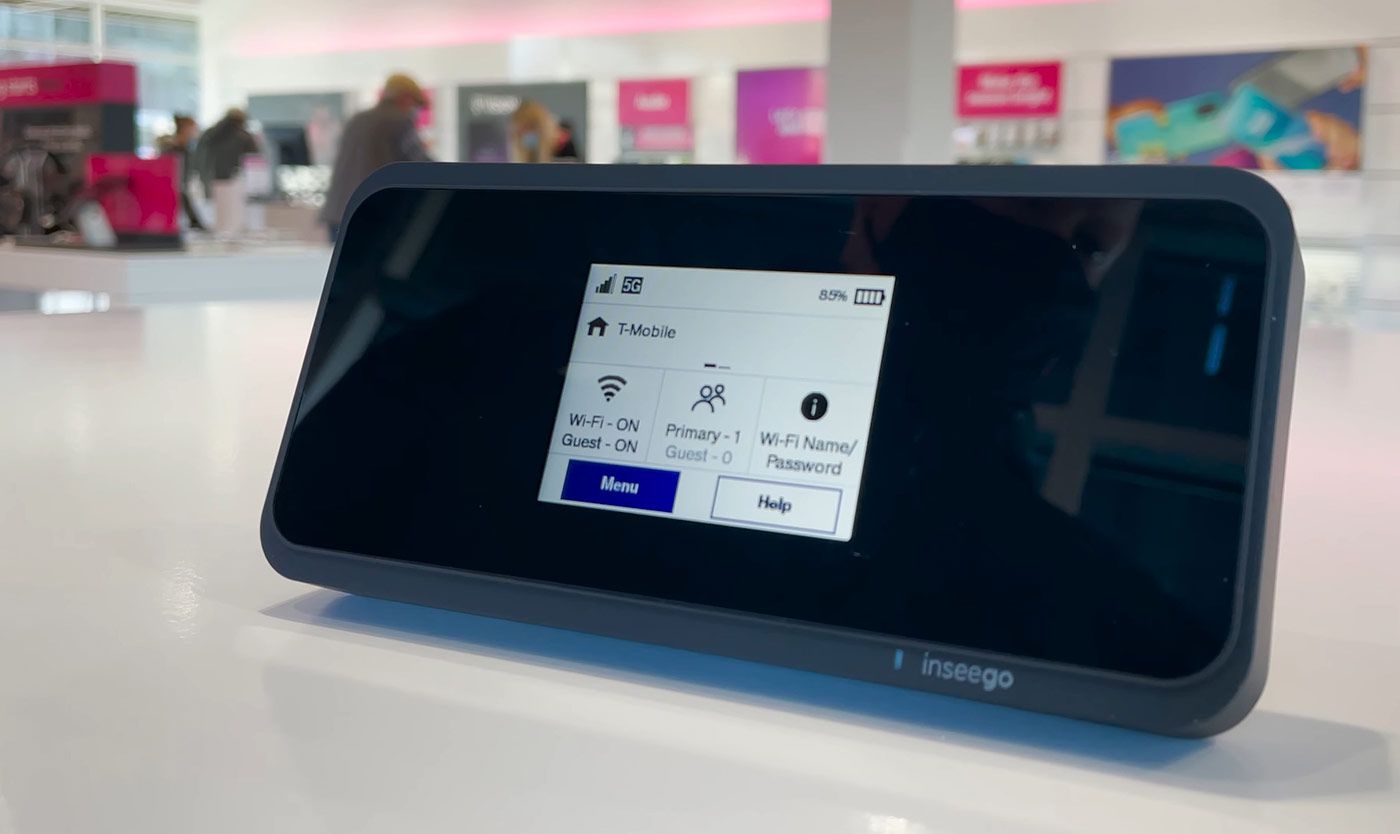 Whether you need a hotspot for travel or for home internet access, T-Mobile’s first dedicated hotspot for its 5G network has you covered. The 5G MiFi M2000 Hotspot supports various bands such as low-band 5G, mid-band 5G, and 7-band aggregation for the carrier’s 4G LTE network. Speeds will differ depending on your location. For instance, users in urban areas will experience speeds between 300 to 500Mbps, while rural users will experience 4G LTE speeds. Even with the differences in speed, this hotspot offers high-quality connectivity to a reliable network.

While T-Mobile offers a variety of hotspots, the M2000 is by far its best performing device. Even when operating in 4G mode, the hotspot is about 10 times faster than the carrier’s other hotspots. Not only is the M2000 extremely fast, but its battery life is also lengthy with a capacity of 24 hours. The large 5,000mAh battery can support up to 30 devices.

Considering the available networks, speeds, and power to sustain 30 devices, it’s clear the M2000 is perfect for home use or those on the go. Due to the M2000 being roughly 6 inches in height and weighing over 7 ounces, the hotspot may be more suitable for the house instead of your carry-on luggage. For those who wanted to stay connected at home, T-Mobile offers a 100GB service plan.

If you're on the go without a readily accessible, quality Wi-Fi network, the Skyroam Solis Lite (view at B&H) is the best hotspot to keep you connected. For international travel, GlocalMe's G4 Pro 4G LTE mobile hotspot (view at Amazon) is a fantastic option, with cloud SIM technology that means you're never tethered to one specific network.

Nicky LaMarco has been writing and editing for more than 15 years for consumer, trade, and technology publications about many topics including: antivirus, web hosting, backup software, and other technologies.

What to Look for in a Mobile Wi-Fi Hotspot

Your hotspot won’t be as convenient as you need it to be if you can’t connect to a dependable network. Mobile hotspots operate on existing cellular networks. As a result, you want to ensure the location where you’re going to use the hotspot has reliable service. All carriers are not created equally as some carriers work well in urban areas but not rural areas and others work well in rural areas but not urban areas. Regardless of the device you choose, selecting a device compatible with AT&T or Verizon is a safe bet.

Hotspots are often used to support multiple devices and for extended periods of time, so battery life is critical. Whether you need your hotspot during the workday or on a long road trip, you need to make sure it has the battery life to cope. Some devices even have large enough batteries to serve as a power bank. Most batteries range between eight and 48 hours. Some even allow for users to upgrade their device’s battery.

If you’re planning to stay within the U.S., this section doesn’t apply to you. However, if you’re an international traveler, you may be more inclined to select a device that won’t break the bank. In researching hotspots, make sure you know which countries the device will work in and how much data plans will cost you.