They're tiny but mighty

Mini PCs are smaller than full-sized desktop PCs, but they’re powerful enough to enjoy snappy productivity and gaming performance. If you need a capable machine to carry with you that can fit into a backpack, briefcase, or even your pocket, or just something that won’t dominate your work or personal space, then there is likely a mini PC available to suit whatever specific use you have in mind.

The Intel NUC 11 Extreme Beast Canyon is the best mini gaming PC you can buy overall, but If you don’t know for sure what PC you need, we’ve researched the top-ranking options in multiple categories.

Here are the best mini PCs for gaming.

To showcase the power of their processors, Intel’s NUC mini PCs offer the most powerful hardware in the most compact form factor possible. The Intel NUC 11 Extreme Beast Canyon could be accurately described as a beast of a PC, and the hardware packed inside its small chassis is undoubtedly extreme.

While the size of the NUC 11 is deceiving, being more akin in dimensions to an external hard drive than a desktop PC. It has enough power packed inside to equal almost any full-sized gaming rig.

If you go for the maximum configuration, this mini PC will handle any game you want to run with ease. Though you can save some cash by selecting less powerful components, even the most basic configuration is quite pricey. However, there has to be a price to pay for a device that doesn’t compromise performance for size. 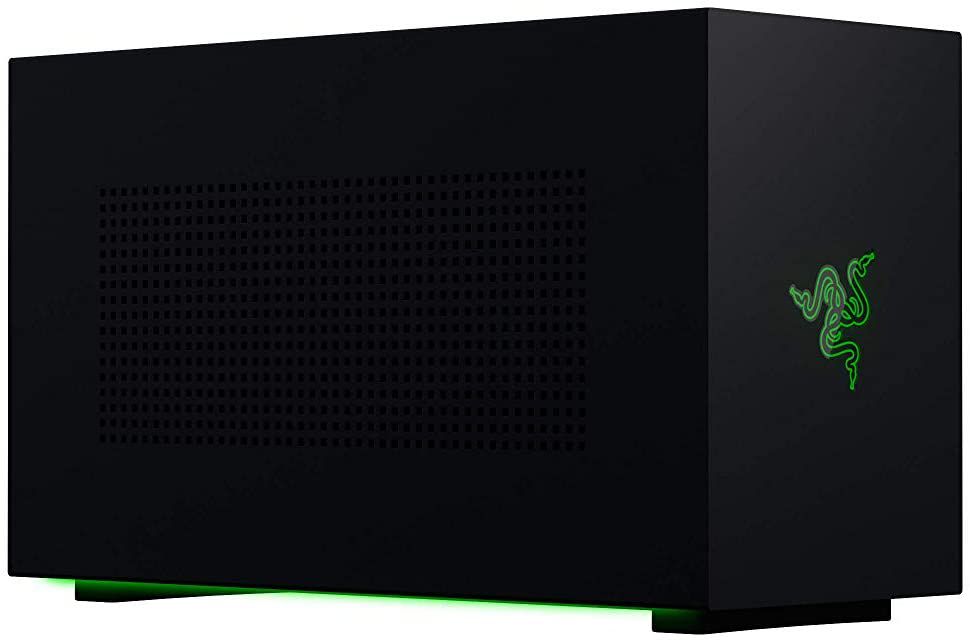 Razer is well known for manufacturing some of the best laptops and gaming accessories around, and their new desktop mini PC lives up to that lofty reputation. It’s expensive, but for the price, you’re getting seriously powerful hardware in a chassis that rivals the NUC 11. It’s slickly designed with a subtle black aesthetic accented by the glowing Razer logo.

What sticks out about the Razer Tomahawk is its unique design. The Tomahawk incorporates a toolless sled system where you can access the inside of the PC by sliding out the tray that holds all the components, making it easy to upgrade. This setup is highly unusual for mini PCs, which are typically difficult to work on. The Razer Tomahawk is a great option for someone who wants a PC to upgrade with minimal hassle. 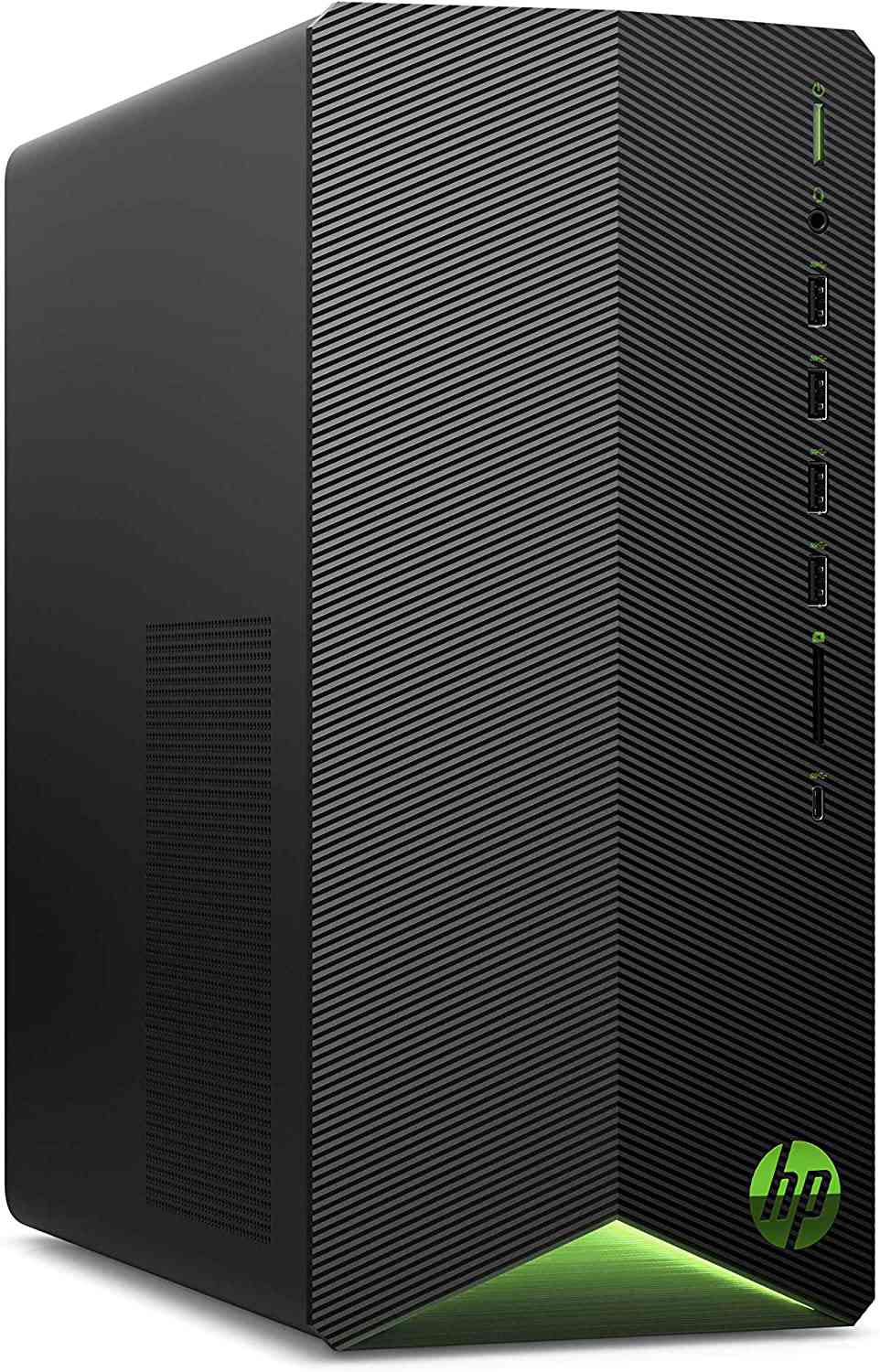 It's not the smallest or the most powerful mini PC out there, but the HP Pavilion Gaming Desktop is affordable and is powerful enough to play most modern games, albeit not at the highest settings. While it's a very basic system, it's good enough to make a reasonable entry into the world of PC gaming.

It's essential to keep in mind that you can upgrade this system after buying it with more RAM, a more powerful graphics processing unit (GPU), or more storage. It's also an excellent system for photo or video editing and other creative tasks. Despite the low price, it has a pleasing appearance that has a cool edge without being too blatant about its gaming-focused design. 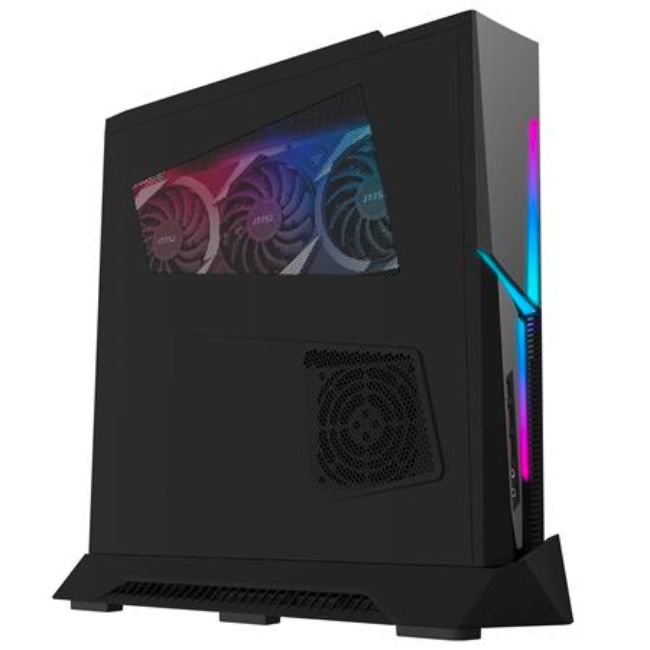 The MSI Trident 3 is the ideal PC for your living room, designed to fit in with your traditional gaming consoles perfectly. It’s sleek, powerful, and remarkably affordable for how much cutting-edge hardware it packs inside. The Trident 3 offers flexible arrangements; you can place it in a vertical stand, flat on a desk, or in a cabinet along with your home theater setup.

Inside, you get ample SSD storage that’s got plenty of room for your games and is blazing fast. The MSI Trident 3 comes equipped with a powerful Intel processor and mid-range Nvidia graphics card, as well as plenty of RAM, making for an ideal PC gaming system for your living room. The only real downside to the Trident is that users report that the Wi-Fi connection can be unstable at times, but most gamers plug their PCs directly into their routers anyway. 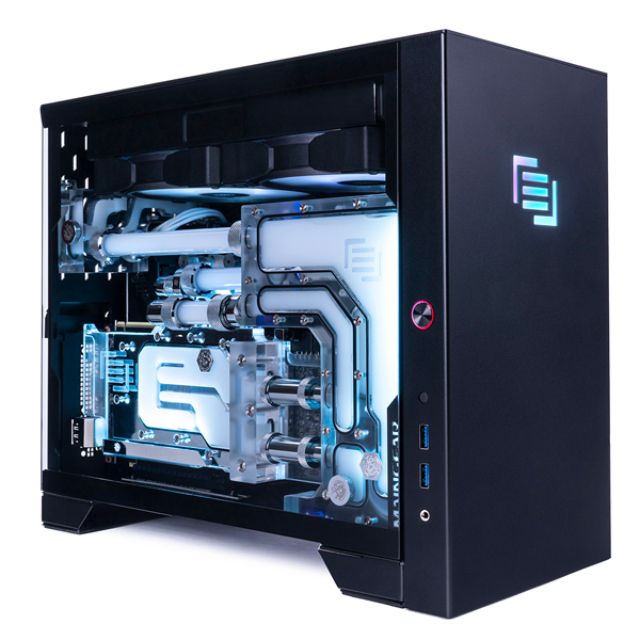 The Maingear Apex Turbo is a tiny machine yet packs in cutting-edge, top-tier components while running silent, thanks to custom hardline cooling. You get to choose the color of the liquid in the cooling system and other aspects of the interior for a decked-out appearance. The Apex Turbo is one PC you'll want to display proudly, as it's stunning to look at.

The degree to which it's possible to upgrade the components in the Apex Turbo allows you to craft a PC that will chew through even the most demanding games and tasks. The fact that it's able to do this while maintaining such a small size and remaining silent is nothing short of remarkable. However, keep in mind that you could buy three or four other PCs on this list for the cost of the top specs of this system. However, this is a genuinely incredible machine if you can afford it. 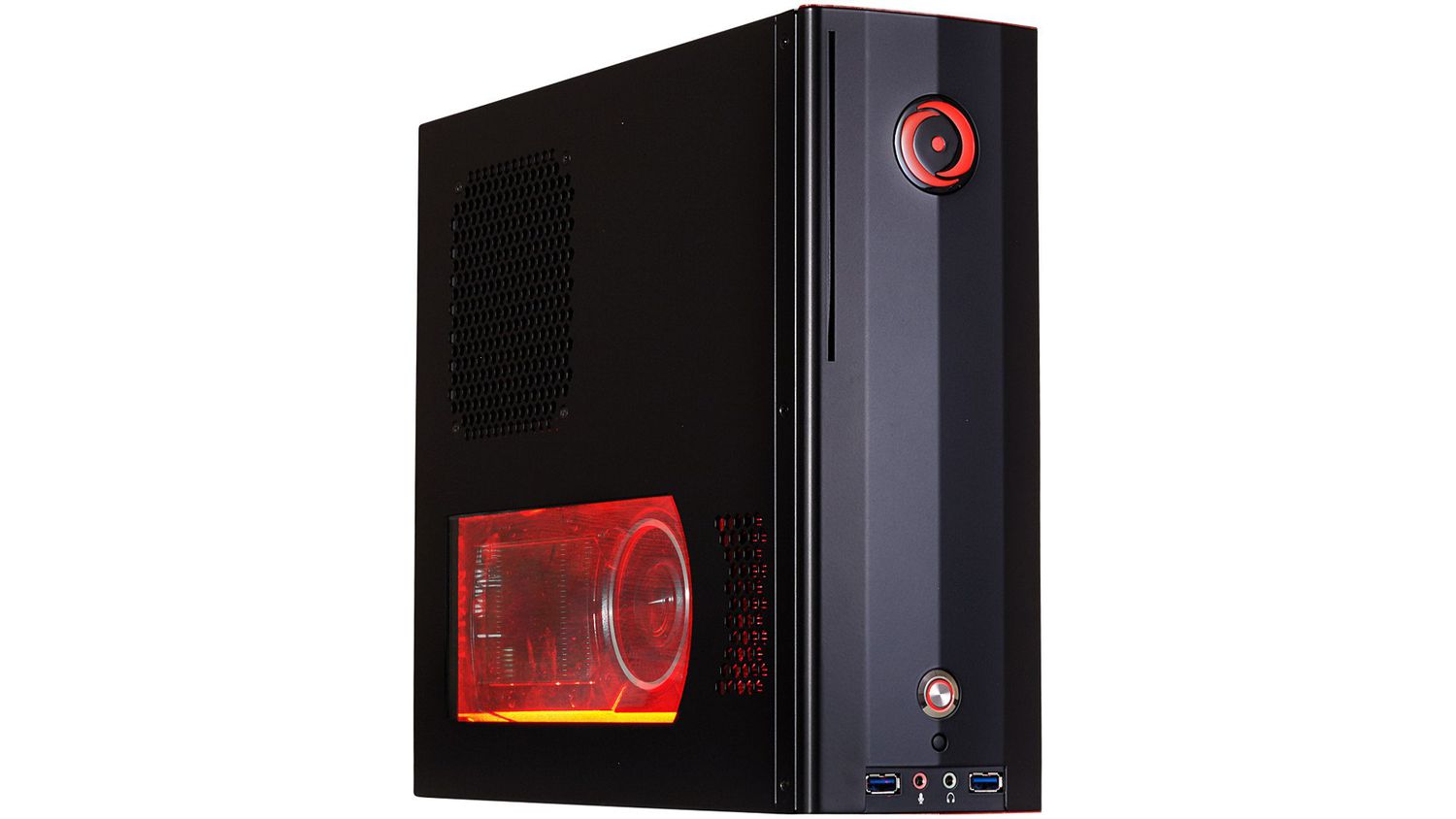 If you want to pick the components that go into your gaming PC, but don't want to put one together from scratch, a custom PC builder like OriginPC is a great way to go. The OriginPC Chronos V2 offers plenty of power in a small form factor and allows for plenty of customization. Though you're paying a premium for a custom-built rig, the base configuration is pretty solid.

One cool thing about the Chronos V2 is that instead of the usual cheap and terrible mouse and keyboard, the Chronos V2 comes bundled with free high-end accessories from Corsair. If you can afford to spend even more, you can make the Chronos V2 as powerful as you want. 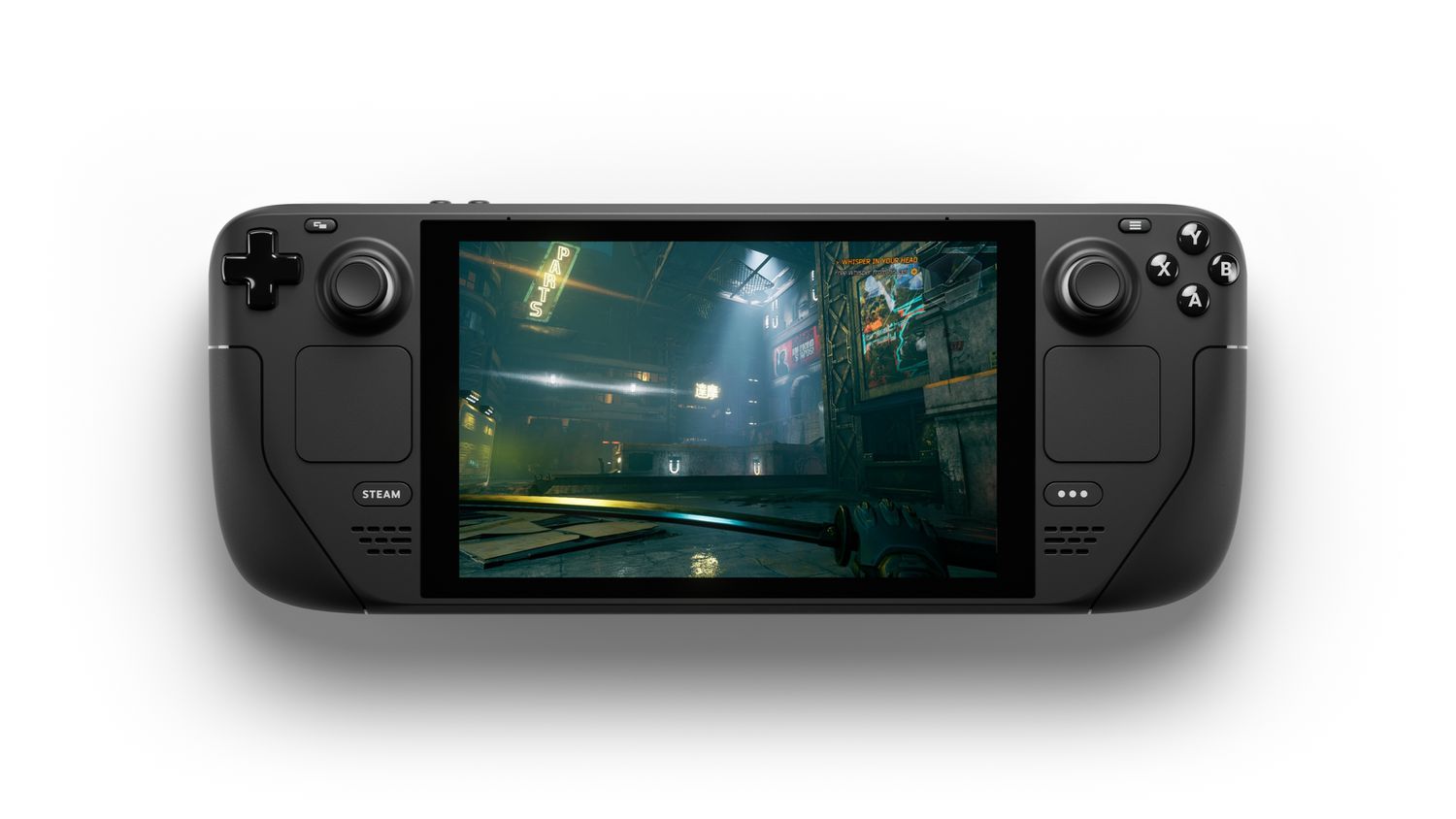 On the surface, the Valve Steam Deck is a handheld gaming console, much like the Nintendo Switch, but it's also a full-powered desktop PC crammed into a device not much larger than a smartphone. Though intended primarily as a mobile device, it can also be attached to a USB-C hub which grants it all the functionality you’d get in a traditional desktop.

In addition to being compact and powerful, the Steam Deck is also remarkably affordable. The base model outclasses any other PC or laptop at that price point in terms of sheer processing and graphical horsepower. The Steam Deck is one of the first systems to ditch older DDR4 memory entirely in favor of a single shared pool of DDR5 RAM that is utilized for both processing and graphics.

However, the base model only comes with 64GB of onboard storage on a relatively slow drive. If you want faster storage, you’ll have to pay extra for the faster 256GB and 512GB models. The storage is expandable with a microSD card slot, and if you’re using it as a desktop you could easily add as much external storage as you want.

If you want the best mini PC for gaming, the Intel NUC 11 Extreme Beast Canyon is the best you can buy. It’s super compact and configurable to be as powerful as your budget can afford. If you have a smaller chunk of change to work with, the HP Pavilion Gaming Desktop is both affordable and reasonably capable, plus you can upgrade it down the road.

What to Look for in a Mini Gaming PC

A solid-state drive (SSD) is preferable to a hard disk drive (HDD). The much higher read and write speeds of an SSD will make more difference to your computer's performance over an HDD than almost any other upgrade. However, SSDs tend to have less capacity and be more expensive than HDDs. A common compromise is to have an SSD for your operating system and commonly used programs, with photos, games, and other high-volume data stored on a secondary HDD.

If you plan to play video games or accomplish graphics-heavy productivity tasks, it’s crucial to have a dedicated graphics card. In smaller PCs and laptops, these are typically less beefy than in full-sized desktops. Nevertheless, graphics processing units (GPUs) such as the Nvidia GTX 1660 Super are common in gaming builds, and the Nvidia Quadro GPUs is great for productivity tasks. As with CPUs, AMD GPUs can offer an attractive wallet-friendly alternative.

If you’re mainly going to be browsing the web, editing text documents, and performing other tasks that don’t necessitate a high-powered GPU, then you can save money on a system with an integrated GPU that is part of the processor.

Most modern PCs utilize DDR4 RAM, and you should consider 8GB to be the minimum. If you’re planning to undertake more power-hungry tasks, 16GB is typically enough for most people. For video editors and other creative types running programs that store a lot of information in the RAM, 32GB can be handy. Having a lot of RAM can also help if you’re in the habit of leaving a lot of tabs open in your internet browser.

Andy Zahn has spent hundreds of hours researching and testing the latest PC hardware. He has been building and tinkering with computers of all descriptions since childhood. Andy follows the latest news in computer hardware with hawk-like interest, always looking out for the most beastly gaming PCs and bang-for-the-buck deals he can find. When he’s not digging around in their silicon guts, Andy is playing the latest games, editing photos and videos, which he publishes on his Youtube channel.

Erika Rawes has written for Lifewire since October 2019. She is a consumer technology expert, which includes gaming and gaming components.