We Researched the Best Mac Keyboards—Here Are Our Top Picks

It's time to invest in a quality keyboard

Jesse Hollington
Writer
Jesse Hollington is a tech writer with 10+ years' experience. He has written for iLounge, Forbes, Yahoo, The Independent, and iDropNews, among others.
lifewire's editorial guidelines

The best Mac keyboards offer the same features you'd expect from any excellent deck, with a few flourishes tailored specifically for the Apple ecosystem. This means great responsive switches (for mechanical models) or springy, soft touch keys (for membrane boards), a sleek aesthetic that matches Apple's famously minimalist industrial design, and extras like passthrough or cable management features. They're also a great option for anyone who's looking to add a keyboard to their MacBook (or any other Apple laptop).

Also, be sure to take a look at our list of the best computer keyboards to see options for other devices. Otherwise, read on to see the best Mac keyboards to get. 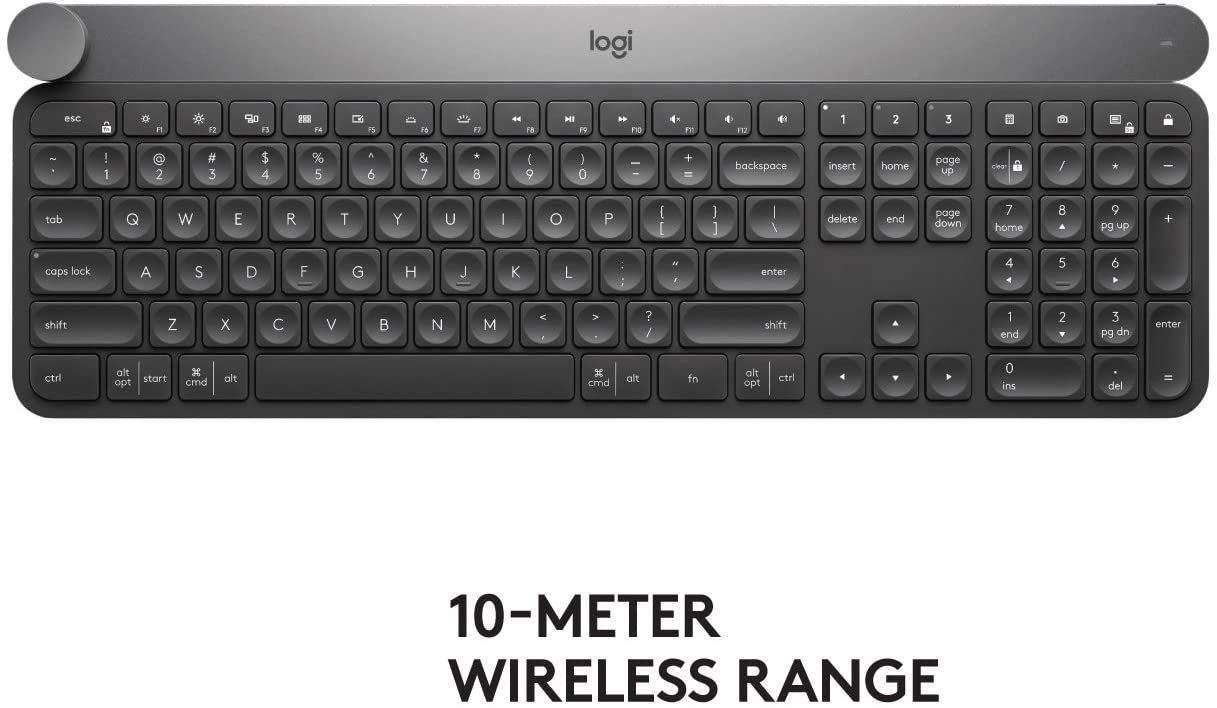 View On Amazon View On Adorama.com View On B&H Photo Video
What We Like
What We Don't Like
Logitech Craft Review

While many folks tend to see keyboards as clunky, utilitarian devices, Logitech’s Craft Advanced Wireless Keyboard may just make you rethink what a keyboard should look and feel like. It’s one of the classiest Bluetooth keyboards we’ve ever laid our hands on.

Craft employs a standard keyboard layout with concave chiclet-style keys that make for a comfortable typing experience. Key action is firm and responsive, reinforced by the solid design of the keyboard itself, which combines solid plastic construction with an aluminum bar at the top for extra weight and stability. It’s heavier than it looks, which means you’ll have no problem making sure it stays firmly in place on your desk. You can hook it up to your Mac either via Bluetooth 4.2 or by plugging Logitech’s included Unifying Receiver into a USB port. The Logitech Craft can be paired with up to three devices at a time.

Beyond that, Craft also packs in some unique and cool features. Smart backlighting adjusts automatically based on room conditions. Until you place your hands above the keyboard, it switches off. Logitech’s new Crown, an aluminum dial in the top-left corner, can be programmed with its Options software for a whole range of context-specific tools, from simply adjusting your volume to tweaking settings like color and saturation in creative apps like Photoshop.

"In addition to the standard character keys, this keyboard features media controls and macOS-specific shortcuts that make it feel like a natural fit with Macs." — Yoona Wagener, Product Tester

While there are lots of great third-party keyboards that closely adhere to Apple's minimalist aesthetic, sometimes it’s hard to beat the original, classic designs, and the Magic Keyboard remains the standard by which all other Mac keyboards are measured. Plus, of course, you’re guaranteed unparalleled compatibility within the Apple ecosystem.

If you’ve got a desktop Mac, you probably already have the standard tenkeyless Magic Keyboard, which mirrors that which is built into your MacBook. However, fans of Apple’s Magic Keyboard in need of a full-size typing layout will prefer the Magic Keyboard with a numeric keypad onboard. It provides seven more columns of keys. In addition to the eponymous numeric keypad, you will also find dedicated navigation keys that are better spaced out, and six more function keys, which are unique to Apple’s own keyboards.

Otherwise, it’s the same Apple Magic Keyboard design that you know and love, with a comfortable low-profile typing experience, and an internal battery that lasts months and recharges using the included USB-to-Lightning cable. It has Bluetooth, but it can also be used as a wired keyboard simply by plugging it into one of your Mac’s USB ports.

If you’re looking for a keyboard with advanced features you can pound away on all day, look no further than the highly-durable, German-engineered Das Keyboard 4 Pro. A serious keyboard for serious users, it's built to last while yielding exceptional tactile feedback.

And it's one of the few mechanical keyboards designed with Mac users in mind. Its layout mimics Apple’s own Magic Keyboard, negating the need for custom drivers. There are dedicated macOS keys for all of the usual functions, and a prominent set of media controls in the top right corner, including a big volume dial. A built-in two-port USB 3.0 hub also lets you easily connect high-speed USB storage devices without having to fish around for ports on the back of your Mac.

As a mechanical keyboard, it exhibits a level of tactile response most low-profile keyboards can’t match. And you can even choose between Cherry MX Brown switches, for a softer and quiet feel, and Cherry MX Blue if you like your keyboards really clicky. At any rate, you can expect a clean, natural type-feel with laser-etched keys rated for over 50 million strokes.

"The one limitation of the 4 Professional’s design is that while this is a sleek and capable keyboard for professionals, it’s not really office-friendly since Cherry MX Blue switches are as loud as they get." — Yoona Wagener, Product Tester 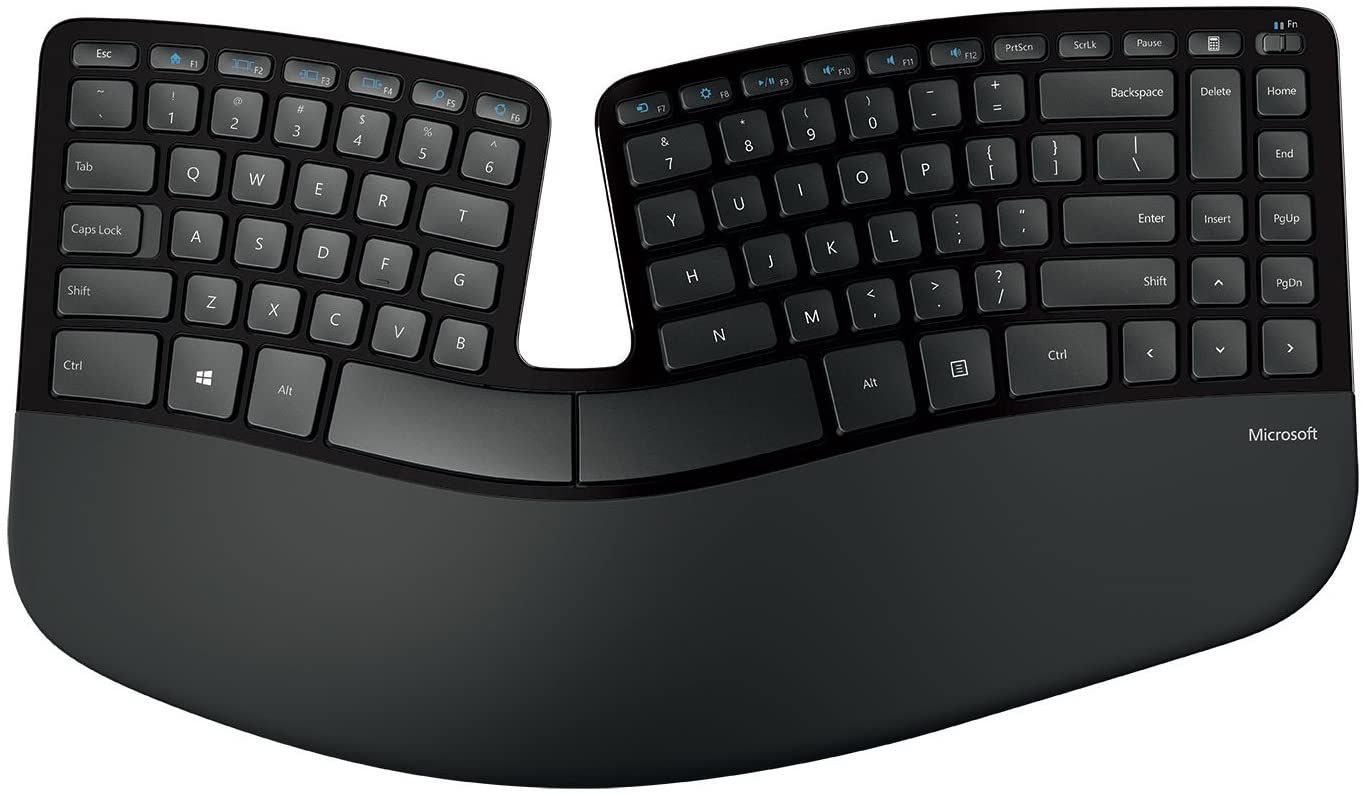 20 years ago, Microsoft was one of the first to introduce an ergonomic keyboard. So it's no surprise the company continues to lead the way, making the best keyboards in this category. Its latest, Sculpt, has taken the design to a whole new level — no bells and whistles needed.

The split design is fairly standard by now. For those unfamiliar, the keyboard is split into two halves, keeping your wrists and forearms in a natural position thereby relieving stress and strain. Its dome design and cushioned palm rest position the wrists at a more comfortable angle. A numeric keypad is cleverly separated. You can use it in whichever way suits you.

Despite being a Microsoft keyboard, it also works remarkably well with the Mac. A physical switch will toggle the top row of keys between acting as function keys and media control keys, which map to their macOS functions as you’d expect. The only caveat is that it’s wireless but not Bluetooth, so you’ll need to take up one of your USB ports with the included USB dongle.

"One unique feature of the Sculpt we loved was the function switch. Located on the upper-right hand side of the keyboard, this switch allows you to toggle the functionality of the top row keys, replacing the function key." — Emily Isaacs, Product Tester

View On Amazon View On Best Buy View On Logitechg.com
What We Like
What We Don't Like

Because of their low-profile keys, most Apple-tailored keyboards aren’t designed with gamers in mind, so it's challenging to find a decent gaming keyboard that’s also fully compatible with your Mac. Fortunately, Logitech has been playing nice with macOS for a long time, and its G910 Orion Spark provides the same great level of Mac support as the other keyboards in its "G" (gaming) series lineup.

Aside from Mac support, the G910 wields its own bespoke "Romer-G" mechanical switches. The result is up to 25 percent faster actuation, making it one of the fastest mechanical gaming keyboards you can buy. Yet the switches are some of the quietest we’ve ever heard, meaning your coworkers aren't likely to file a noise complaint.

With a palette of 16 million colors, the customizable per-key RGB lighting adds a touch of flair, and the keys are nicely sealed in such a way that light won't bleed from around the edges. Nine dedicated "G-keys" can be programmed with custom macros, uniquely assigned for each game. As for on-the-fly adjustments, the Logitech G910 Orion Spark is graced with a volume roller as well as the usual set of dedicated media keys.

The G910 also packs in one other cool and unique feature: Arx, which lets you use your smartphone or tablet as a second screen to display supplemental in-game content or general system stats. 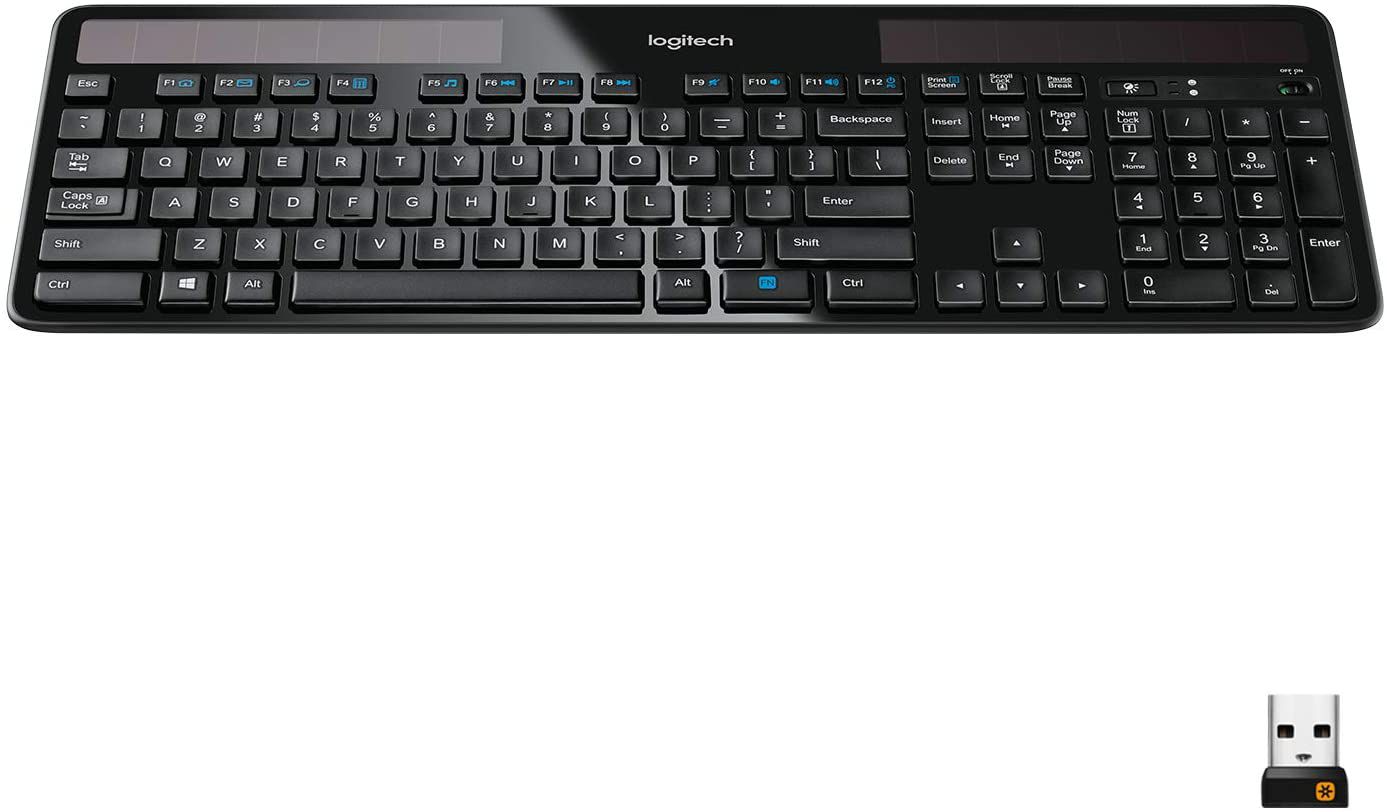 These days, wireless keyboards may have improved battery life, but that doesn’t mean you don’t still have to charge them in some way. And if you don't want to run out of juice minutes before your deadline, doing so can be a real nuisance. Fortunately, Logitech has come up with a creative solution to this problem in the form of the Solar K750, a keyboard with effectively infinite battery life.

The full-sized K750 keyboard is similar in design, layout, and spacing to Apple’s own Magic Keyboard, and it provides the comfortable typing experience we’ve come to expect from Logitech, its keys concave and its key switches quiet. There’s even a hotkey for quickly bringing up the macOS Launchpad.

Although Logitech dubs the K750 "Solar," the reality is that it will charge up from any light source, so you don’t have to worry about keeping it in the sun or near a window. The lights in your office, even the desk lamp in your dorm or hotel room should be more than sufficient. Once fully charged, it runs for three months in the dark. Unless you live in a cave, you don't have to charge it.

The Logitech Craft (view at Amazon) is easily the best chiclet-style Mac keyboard on the market, with great-feeling, responsive keys and surprising weight and durability. If you crave an ergonomic deck, however, Microsoft's Sculpt (view at Amazon) is an awesome alternative.

Our expert reviewers and editors evaluate keyboards based on design, switch type (for mechanical decks), actuation distance, functionality, and features. We test their real-life performance in actual use cases, both for productivity tasks and in more specialized scenarios, like gaming. Our testers also consider each unit as a value proposition—whether or not a product justifies its price tag, and how it compares to competitive products. All of the models we reviewed were purchased by Lifewire; none of the review units were furnished by the manufacturer or retailer.

Jesse Hollington currently works as a Senior Writer for iDropNews.com, where he writes about what’s happening in the world of Apple, and previously served as the Senior Editor for iLounge.com for over 10 years, where he reviewed a wide array of iPhone and iPad accessories and apps along with providing help and assistance through technical articles, tutorials, and a reader Q&A column; he is also the author of iPod & iTunes Portable Genius.

What to Look for When Buying a Computer Keyboard

When it comes to keyboards, size matters. Are you planning on using yours primarily at your desk or will you take it to coffee shops with you? If you need a portable keyboard, there are still great full-size options but do keep size in mind when deciding which one you want.

What kind of computer will you be using with your keyboard? While it seems like all keyboards should be compatible with both Macs and PCs, this isn’t true. Windows and Mac keyboards also have slightly different layouts; if you’re shopping for a Mac computer keyboard, it’s best to get one specifically tailored to that OS.

There are all types of keyboards out there, so think about how you intend to use yours. Office-focused keyboards should be ergonomic, while gamers have different concerns. However, if you’re going to be using your keyboard for everything, it’s best to find a multi-purpose model that’ll work as well for typing emails as it will for everything else.