Low-light cameras for any photographer's needs

The best low light video cameras grant you the ability to shoot 4K video in dark and challenging conditions; some are even capable of infrared night vision. Our top pick, the Sony A7S III, is so sensitive that it’s possible to film high-resolution, slow-motion video with only the light of the moon illuminating the scene.

Gone are the days when photographers and videographers must pack in their gear once the sun sets, or lug heavy tripods around in order to get the shot. While some cameras give up resolution for low light capability, others such as the Nikon D850 are capable of shooting late into the evening or in dim interiors and producing incredibly detailed images, in addition to high-quality video footage. Also look for in-body image stabilization in Sony and Panasonic cameras, which represent some of the best professional cameras money can buy and are ideal for either your next vacation or a commercial video shoot. 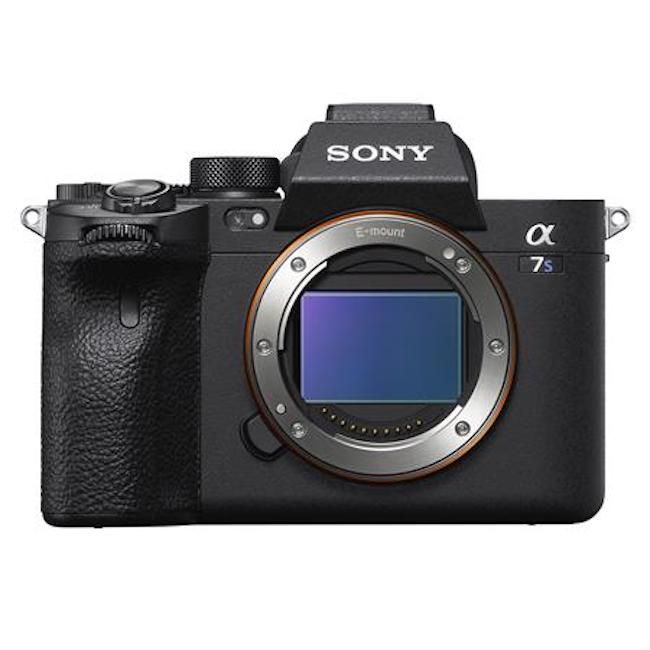 View On Amazon View On Adorama.com View On B&H Photo Video
What We Like
What We Don't Like

The S in A7S has always stood for sensitivity, and that is even more true for this latest in a line of low light video royalty. The Sony A7S III retains the relatively low resolution of its predecessors, but fewer pixels mean bigger pixels, and that gives the A7S III a massive advantage over other cameras. Not only does it possess a spectacularly wide ISO range from 40 to 409,600, but it maintains excellent video quality throughout that range. That means this camera is capable of shooting at night with only the faintest of illumination to aid it, such as street lights or the moon.

On top of sensitivity, this camera is capable of competing with genuine Hollywood cinema cameras, providing 16-bit RAW video, as well as slow-motion 120fps at 4K resolution or 240fps at 1080p. This is aided by a revamped menu system and a fully articulating LCD screen, all of which is paired with Sony’s broad lineup of both first and third party lenses. The third-party lens manufacturer support will be particularly appealing to budget-minded photographers, as manufacturers such as Tamron and Sigma produce lenses that provide professional quality at a fraction of the cost of those produced by Sony, Canon, and Nikon.

The Best Video Cameras, Tested by Our Experts 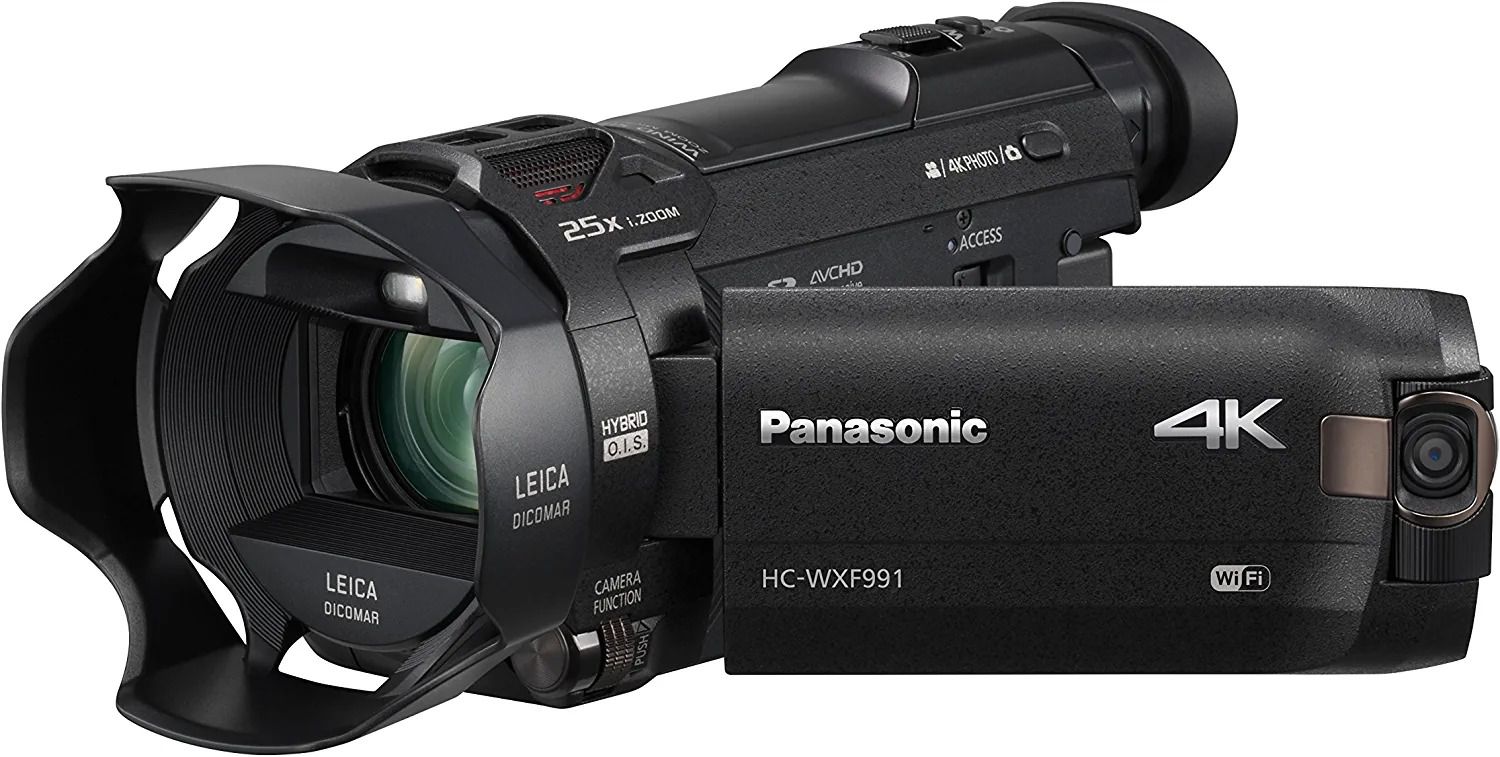 If you’re looking for something that can really see in the dark, then you want a camera with infrared (IR) capability. The Panasonic HC-WXF991 has both those infrared capabilities in addition to being a remarkably competent camcorder capable of great video quality during the day. This camcorder can shoot 4k video and features a long 20x optical zoom with a fast f/1.8 to f/3.6 lens. Just keep in mind that with its small 1/2.3 inch sensor, it isn’t great for low light situations without infrared and that the built-in infrared light is somewhat weak. You will probably also want to pick up an external infrared light if you plan to do a lot of shooting after dark.

The HC-WXF991 also has some other cool tricks up its sleeve in the form of Wi-Fi and NFC connectivity, and more interestingly, a secondary camera attached to the flip-out display. This allows you to capture both yourself and your subject simultaneously. 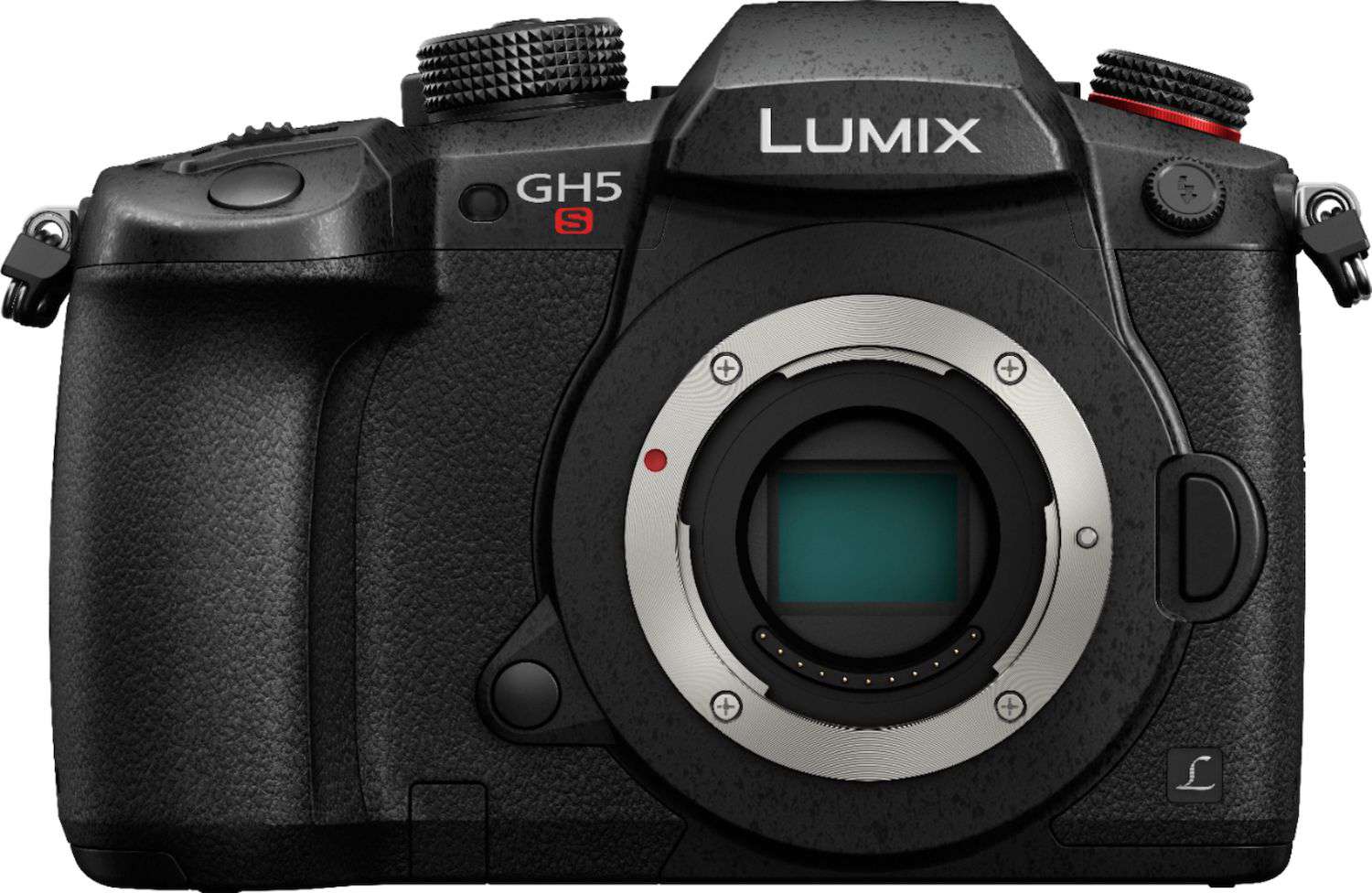 The Panasonic Lumix GH5S is a video-focused interchangeable lens camera with a Micro 4/3 size sensor that, like the Sony A7S, has been built with low noise at high ISOs in mind. It features Dual Native ISOs that provide good looking clean images all the way up to ISO 6400. However, it’s not excessively sensitive, with a maximum ISO of 204,600. Still, that’s good enough to make this an ideal and compact low light video shooting option, and this performance is particularly impressive for such a small sensor. This sensitivity comes at a steep cost given the size of its sensor and lack of internal image stabilization.

The Lumix GH5S is capable of shooting 4K at up to 60fps and 1080p at up to 240fps for some really cool slow motion. This camera also includes 10-bit color depth with 4:2:2 subsampling for footage that looks straight out of a cinema camera. You also benefit from being able to select from the wide range of affordable Micro 4/3 lenses available. 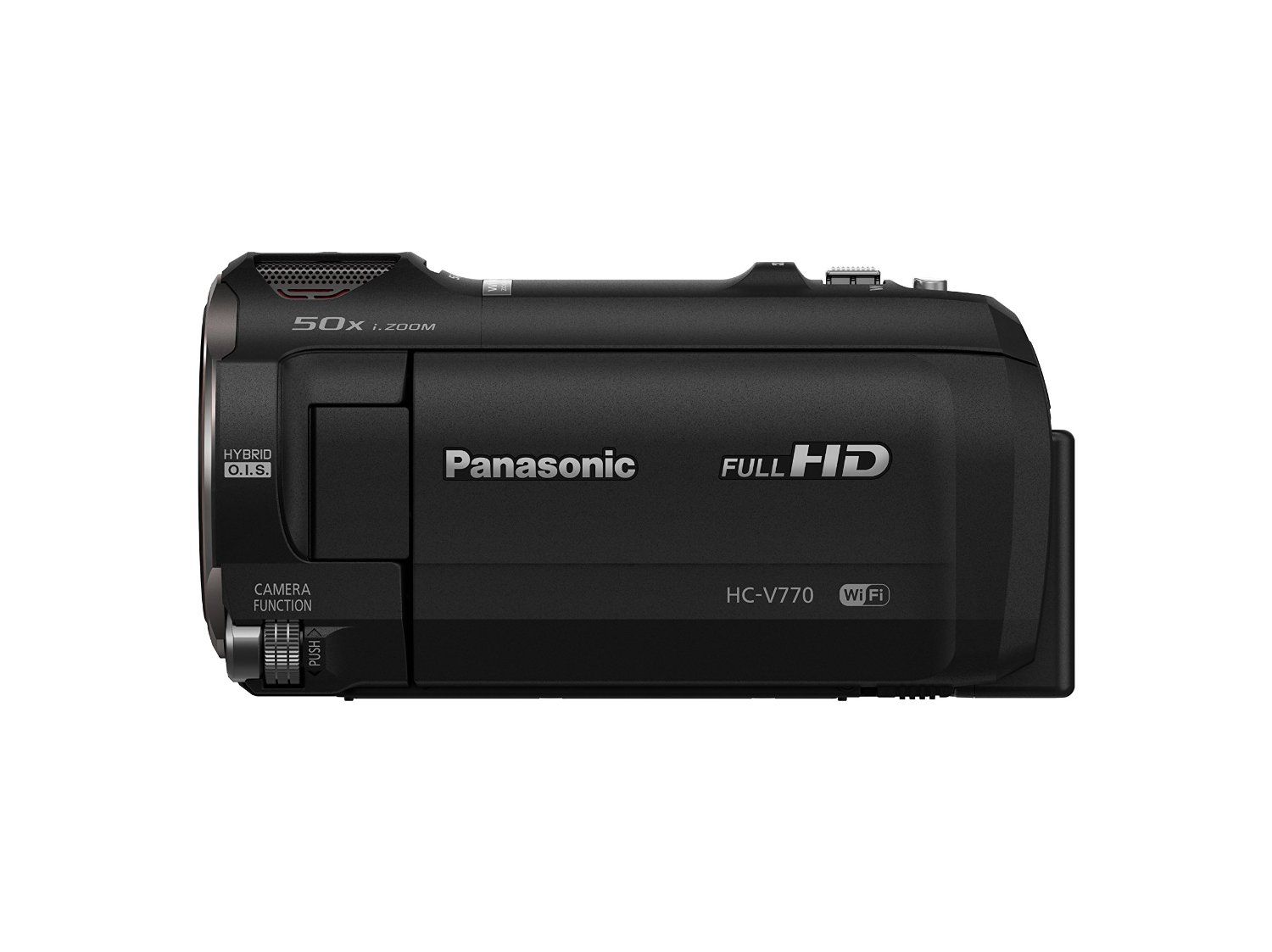 Courtesy of Amazon.com
View On Amazon View On Best Buy View On Adorama.com
What We Like
What We Don't Like
Panasonic HC-V770 Review

If you need to save some money and don’t need 4K video recording capability, the Panasonic HC-V770 is a great option. Though it only shoots at 1080p, it features a 20x optical zoom that has a very bright F/1.8 aperture when shooting at wide angles. This means it’s possible to use this camera in relatively dark conditions, particularly with the aid of the optical image stabilization. An excellent microphone helps you record good audio, regardless of how much light is available.

You also get some cool Wi-Fi enabled features, such as the ability to connect your smartphone and use it as a second camera for picture-in-picture recording. The only other major downside to the HC-V770 is that its touchscreen is fairly low quality. However, overall this little camcorder offers excellent value for money. 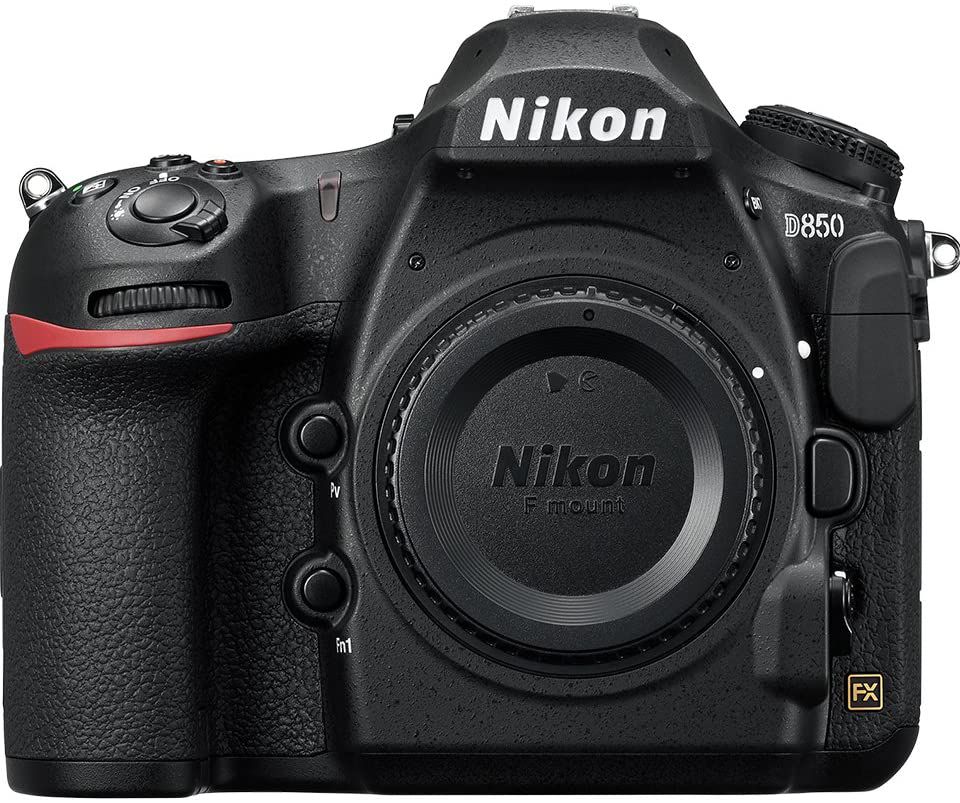 If you’re looking for the best bang for your buck, the Nikon D7500 is the camera for you. This budget-oriented camera doesn’t cut corners to come in at around a thousand dollars. Its 20.9-megapixel sensor may be only DX (APS-C) size, but that’s only a minor hindrance for this impressive camera. The D7500 boasts very low noise throughout a reasonable portion of 100 to 51,200 normal ISO range, which can be expanded to a crazy 1,640,00 ISO, though it will get very grainy at that point.

This camera is capable of 4k video and has a robust and durable body. It can capture time-lapse videos and is compatible with Nikon’s many F mount lenses, both new and old. This makes it even more affordable if you don’t mind buying older lenses that are still excellent despite their age. Overall, the D7500 is great for beginners, hobbyists, and even budget-minded pros. 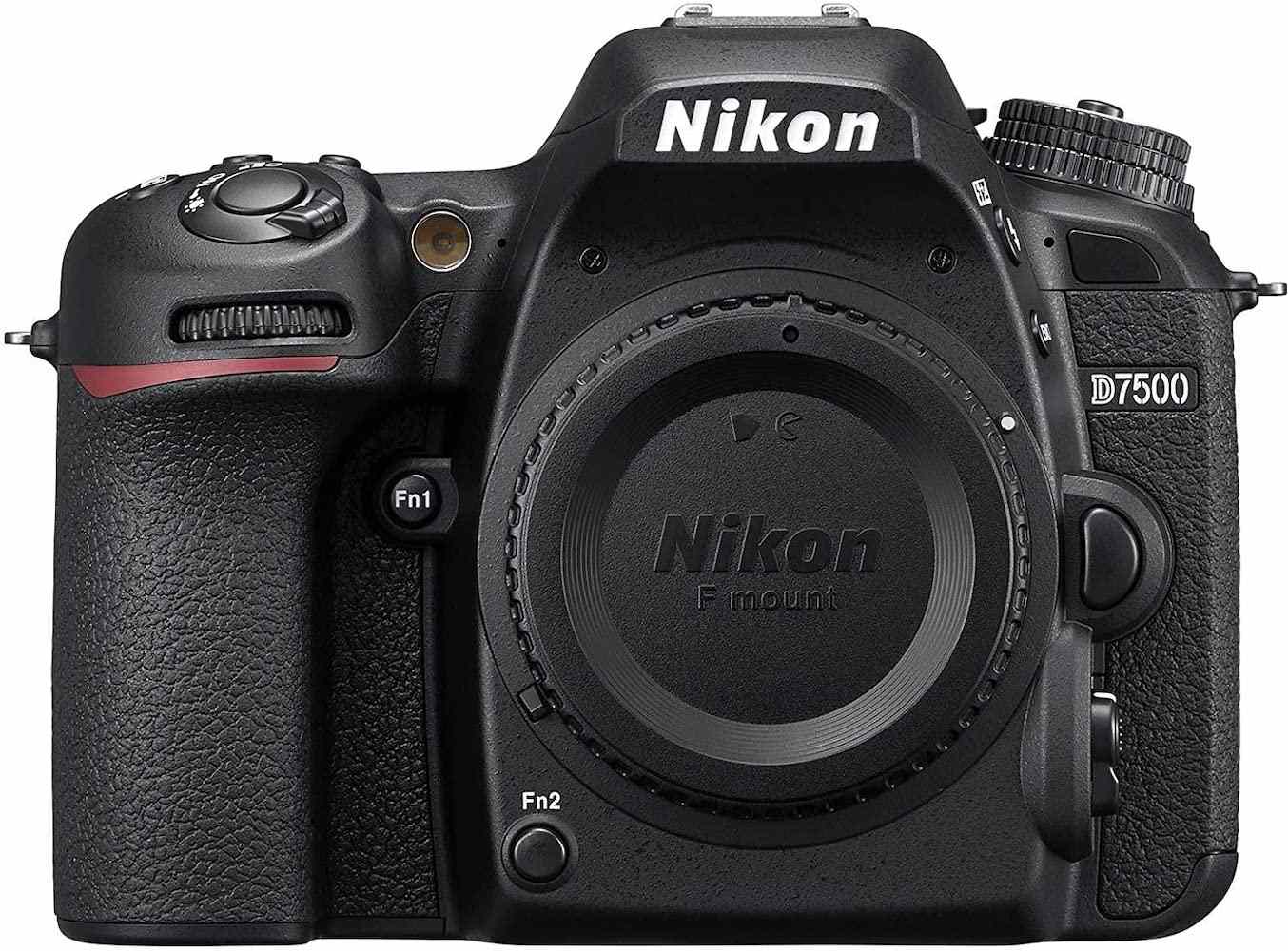 If you’re looking for the best bang for your buck, the Nikon D7500 is the camera for you. This budget-oriented camera doesn’t cut corners to come in at around a thousand dollars. Its 20.9-megapixel sensor may be only DX (APS-C) size, but that’s only a minor hindrance for this impressive camera. The D7500 boasts very low noise throughout a reasonable portion of 100 to 51,200 normal ISO range, which can be expanded to a crazy 1,640,00 ISO, though it will get very grainy at that point.

This camera is capable of 4k video and has a robust and durable body. It can capture time-lapse videos and is compatible with Nikon’s many F mount lenses, both new and old. This makes it even more affordable if you don’t mind buying older lenses that are still excellent despite their age. Overall, the D7500 is great for beginners, hobbyists, and even budget-minded pros.

The Best Video Cameras, Tested by Our Experts 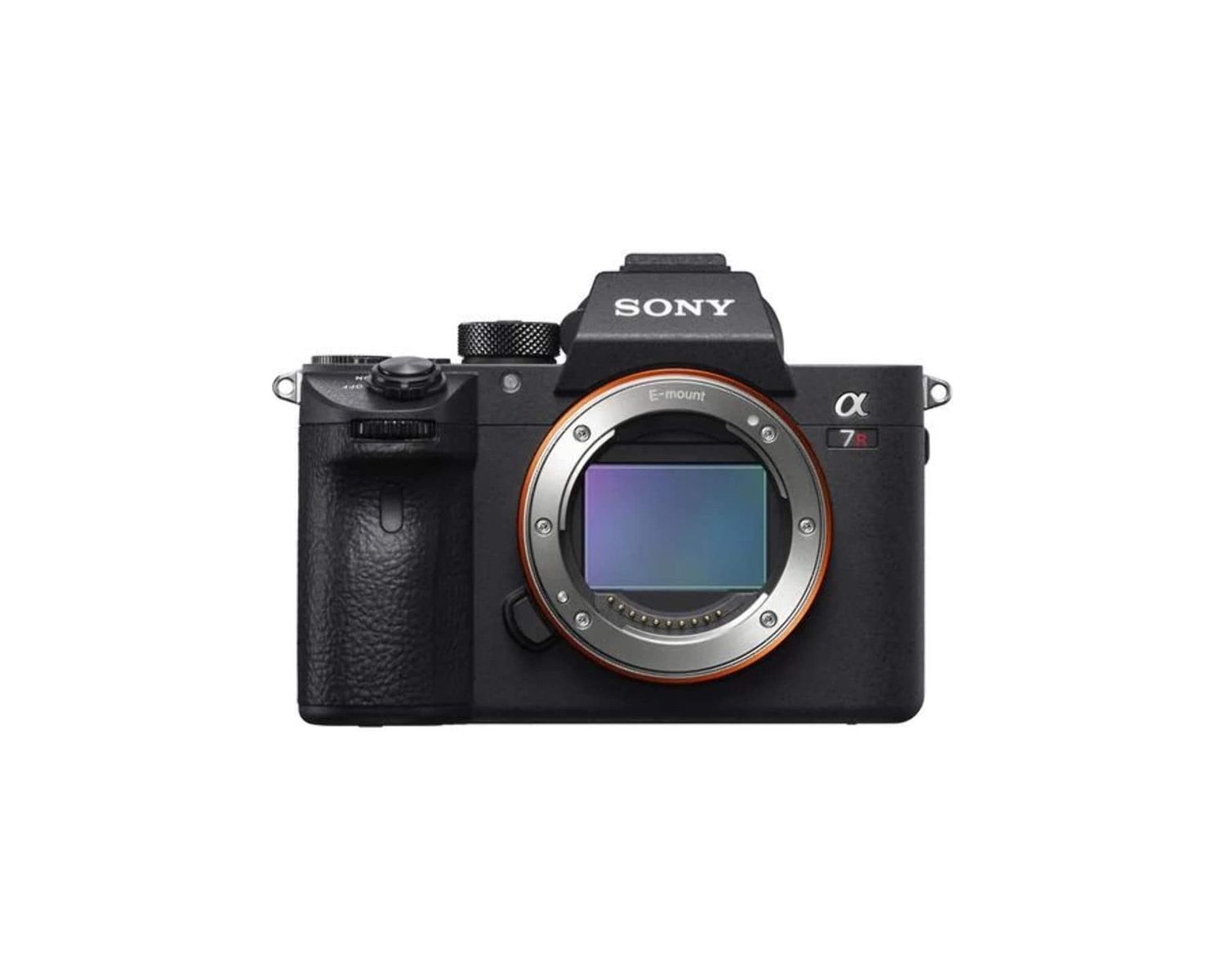 The A7R III isn’t a new camera, but that’s part of what makes it worth considering. Since it’s not the latest A7R camera from Sony, you can save a ton of money and get a powerful, high resolution 42.4-megapixel sensor with in-body image stabilization, 4K video, and reasonably low noise when shooting at high ISOs. This camera will deliver both stunning stills and breathtaking video even in dim and challenging conditions.

The 4K video you get from the A7R III is particularly great, as you can take advantage of both HDR video capability and 5k oversampling where the camera captures higher resolution video and downsizes it to 4K for an even crisper image. The Sony A7R III is really very affordably priced for a camera that easily beats most cameras within its price range.

The Sony A7S III earns our top pick as the best low light video camera because it’s totally unmatched in terms of low light capabilities. Its impressive video quality and incredible high ISO performance make it a formidable tool for any videographer. If the A7S III is a little too steep for you, the Nikon D7500 provides good low light capability at an affordable price.

Andy Zahn has been fascinated by photography and cameras since childhood. He got his first job working on a farm as a teenager to pay for a new camera, and that fascination with capturing the world around him snowballed into a lifelong passion and career. When Andy isn’t testing and researching the latest photographic technology for Lifewire, he is working as a freelance photographer and videographer.

What to Look For in Low-Light Video Cameras

Don’t worry about resolution: If you’re shooting mostly video footage, then you don’t need to worry about sensor resolution so much as when capturing still photos. In order to capture high-resolution 4K footage you only need 12 megapixels. By sacrificing sensor resolution, you get bigger pixels which means greater sensitivity for shooting in dark conditions with reduced noise. With that said, some high-resolution cameras also do a good job in low light, but in general, a larger sensor with fewer pixels will do better in low light.

Understanding ISO: When photographers talk about sensitivity, they generally refer to it in terms of ISO. Basically, the higher your ISO the brighter the image will be. Most cameras can achieve very high ISOs, but it’s more important how they handle the noise this heightened sensitivity brings about in your images. The best low light video cameras can go beyond 3200, all the way up to over 100,000 ISO, and still achieve usable photo and video quality.

Choosing the right lens: Most cameras designed for low light situations have interchangeable lenses. This makes selecting the right lens that can gather the most light extremely important. How much light a lens gathers is determined by its aperture. Lower numbers are better, and for low light video, F/2.8 is as dark as you want to go and is typical of expensive, high-end zoom lenses. Prime lenses can go down to F/1.8, F/1.4, F/1.2, or even F/0.95 and will drastically improve your ability to shoot in low light. Keep in mind, however, that prime lenses brighter than F/1.8 tend to be exponentially more expensive. Brighter lenses are also bigger and heavier.