The 8 Best Light Meters for Photography in 2022

A handy tool whether you're a professional or amateur

The best light meters help you measure how much light (measured as lux) is being put out by studio lights or in other environments. A light meter can be helpful in tweaking the balance of studio lights and giving you a sense of the environment you're going to shoot or record in. Our top choice for most photographers is the Sekonic L-208 TwinMate at B&H. It's an old-school analogy light meter that's very affordable and can do handhled measure of light. You can also mount it on a camera with a hot-shoe adapter.

To get a leg up on your camera game, also take a look at our list of best professional cameras and you're sure to find some options. Read on to see the best light meters to get. 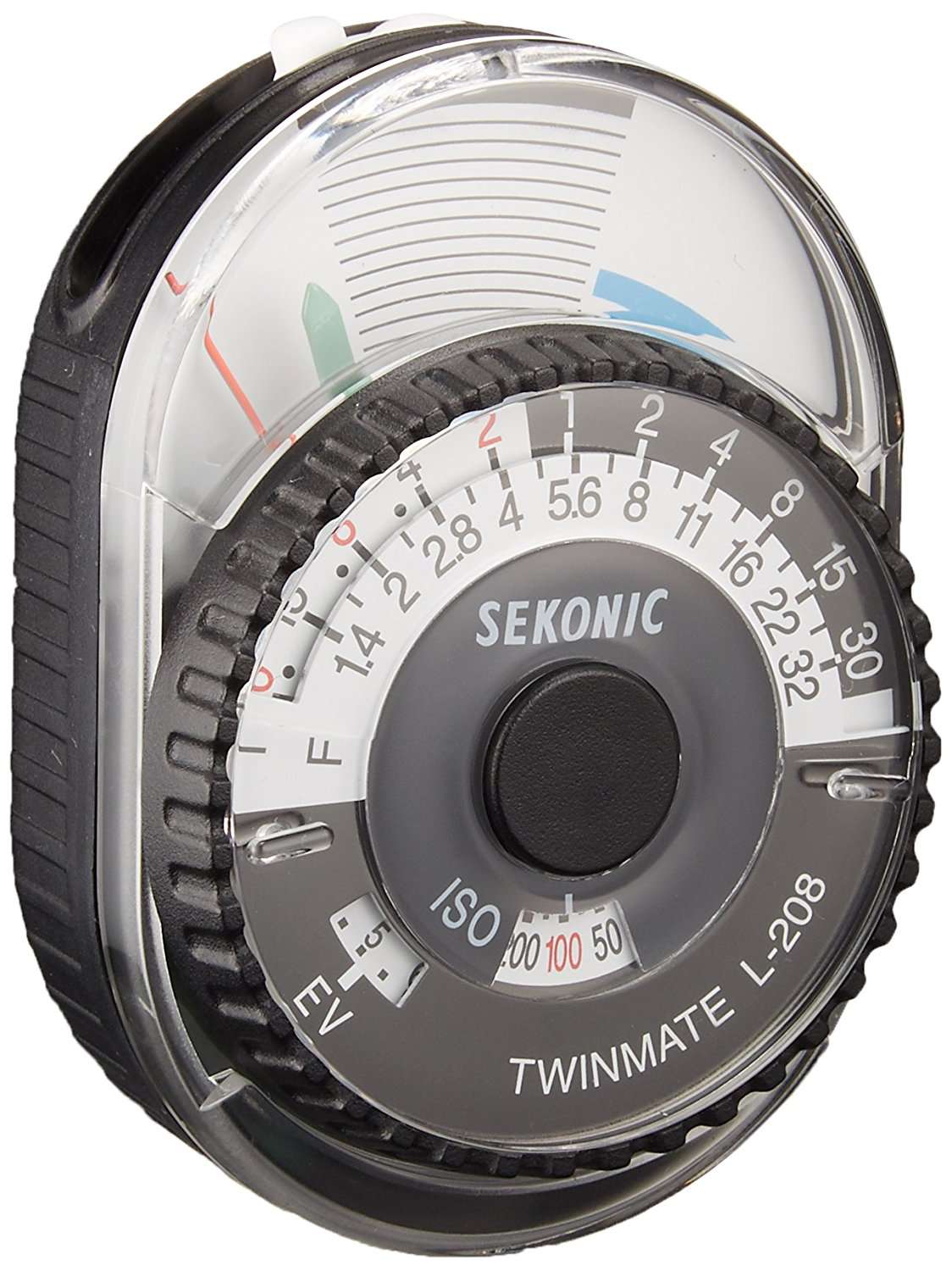 If you're just getting started with film photography or light metering in general, and are happy to go for an old-school analog approach, Sekonic's L-208 is a great low-cost option. Designed for handheld measurement of incident or reflected light, you can also mount it on a camera or bracket via the included hot-shoe adapter if needed.

The meter's measurement range isn't as high as more-expensive models, but it still supports exposure times from 1/8000 to thirty seconds, f/1.4 to f/32 in half-stop intervals, and ISOs between 12 and 12500.

There's a simple "hold-and-read" function that retains readings for 15 seconds after releasing the measurement button, and power is provided by a single long-life CR2032 battery that lasts years under typical use.

Small, lightweight, and easy to use, the Sekonic L-208 is the ideal light meter for those on a budget. 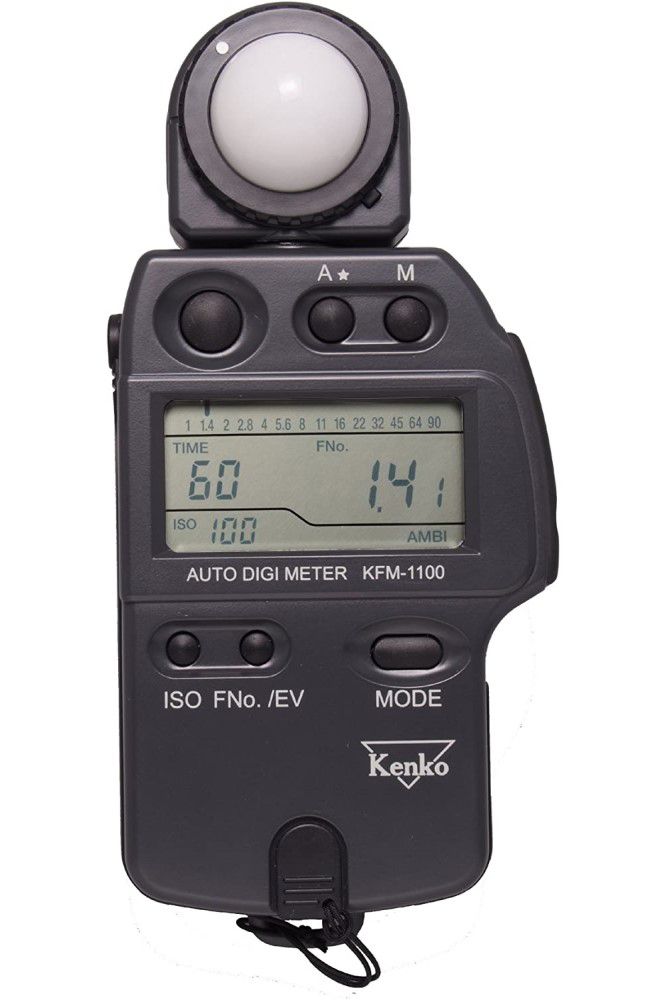 View On Amazon View On Adorama.com

Don't have a huge amount to spend on a dedicated light meter, but prefer digital to analog? Go for the Kenko KFM-1100. Able to measure both ambient and flash light levels, the meter can also analyze both together to come up with the lighting ratio for any given scene.

Sensitivity is about what you'd expect at this end of the market, with exposure times between 1/8000 and 30 minutes, and an aperture range of f/1.0 - f/128. The meter requires just a single AA battery.

While many digital models tend to over-complicate things, the KFM-1100 has a simple, clean display with large numbers that are easy to see at a glance. Sturdy, reliable, accurate, and well-priced, it's an easy value pick. 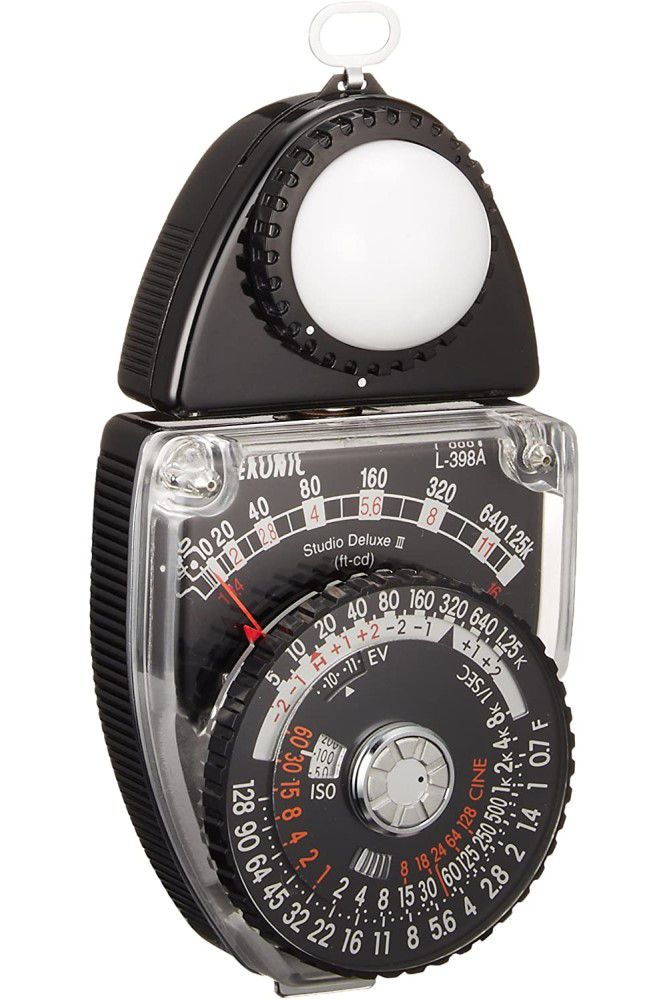 Many light meters make short work of draining their batteries, especially those with large touchscreens. If you're sick of carrying around a stack of AA cells with you "just in case," go old-school instead with the Sekonic L-398A Studio Deluxe III.

This classic light meter is entirely analog, using dials and a needle rather than buttons and a digital screen. The selenium photocell generates enough power to move the needle by itself, meaning there's no need for a separate battery.

Being fully analog, there's no flash integration or other connectivity—it's strictly for spot and ambient metering. Handling ISO values between 6 and 12,000 in ⅓-step intervals, from f/0.7 to f/128, the meter is flexible enough to handle most indoor and outdoor shooting requirements.

Weighing 6.4 ounces and measuring 4.4 x 2.3 x 1.3 inches, it's small enough to hold easily in one hand and comes with a protective case if you plan to take it outside the studio.

If you're after a tried-and-tested light meter (the design goes back decades) at a reasonable price, with no start-up time or battery concerns, you've found it in the Sekonic L-398A. 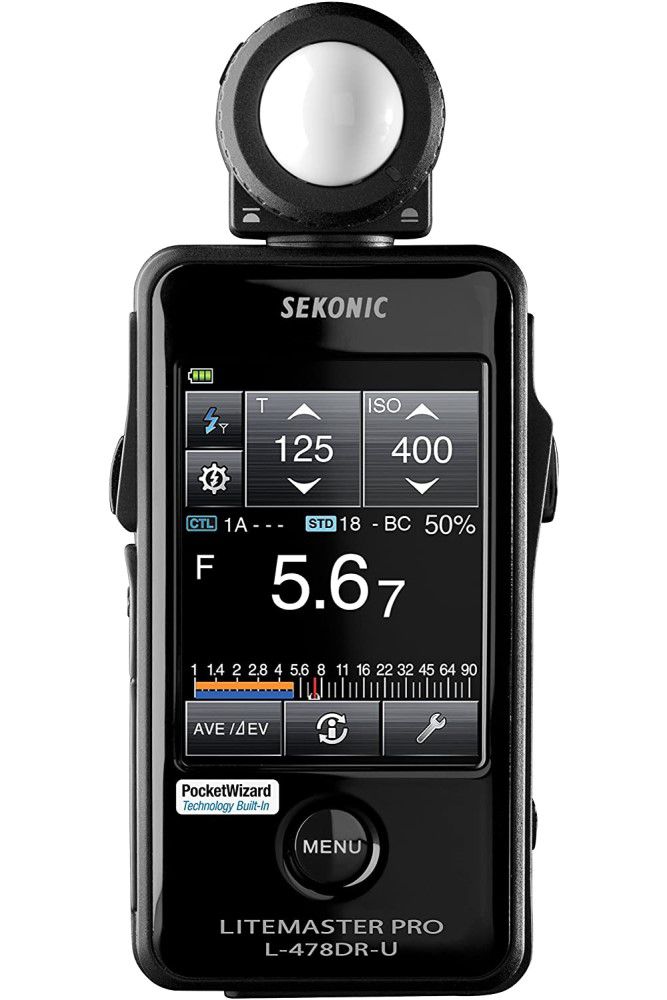 Developed in the late 1990s, PocketWizard's wireless triggering system for off-camera lighting was a boon for professional photographers of all kinds. Sekonic's L-478DR-U light meter incorporates the technology, letting you control the firing and power output of flash units up to 100 feet away.

Models are also available that support Phottix and Elinchrom remote triggering, and the touchscreen L-478DR-U offers a wide array of features beyond its wireless support. Able to measure ambient and flash lighting simultaneously, the meter displays the percentage of flash in any reading.

Equally at home in still or motion-capture situations, there's support for shutter speed on HD SLR cameras, or shutter angle and frame rates in Cine mode. Light measurement is provided in foot-candles or lux units, either alongside exposure or by itself.

Shipping with a protective case and three-year warranty, the Sekonic LiteMaster Pro L-478DR-U is a powerful light meter for semi-pro and professional use. 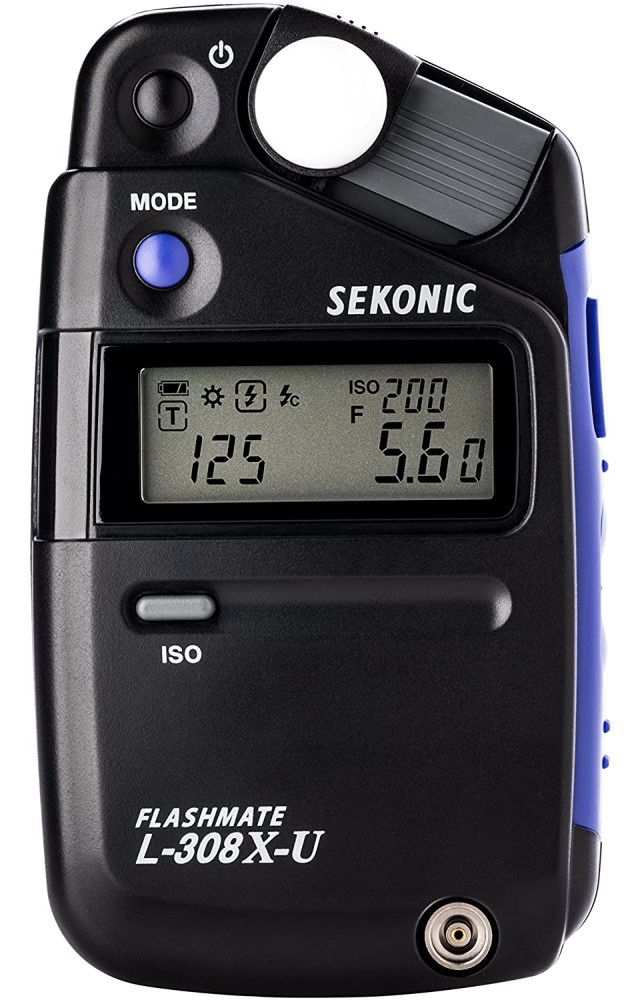 While the size of your light meter isn't likely to be your biggest concern when you're carrying around a bag full of camera gear, anything that reduces the weight and bulk of your equipment is always welcome.

The compact Sekonic L-308X-U is ideal when you're traveling or shooting on location, measuring just 4.3 x 2.5 x 0.9 inches, and tipping the scales at merely 3.5 ounces. Despite its small size, though, this pocketable meter doesn't skimp on essential features.

Able to measure both ambient and flash lighting levels at up to a 40-degree angle, the meter can measure from 0 to 19.9 EV at ISO 100, and can work with flash between f/1.0 and f/90.9. Both shutter priority and aperture priority modes are available.

The L-308X-U does double duty for both photography and cinematography thanks to a pair of Cine modes. Given its reasonable pricing, small size, and versatile feature set, it's a straightforward portable pick. 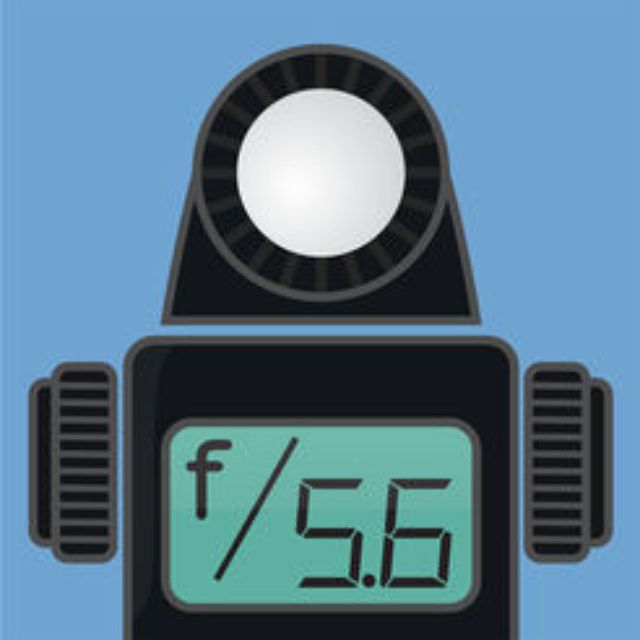 If you don't have a regular need for a light meter, or don't need the extra features and accuracy levels of dedicated models, it's worth taking a look at app-based versions instead.

Pocket Light Meter is the best of the bunch if you're an iPhone user, with better low-light performance in particular than most of the competition. The interface is simple, with the app using the phone's camera to display and measure the available reflected light.

By default you'll see the details for the overall scene, but tapping on the screen switches to spot metering instead. The app provides settings for exposure time, ISO, and aperture, but you can lock any of the settings (if you're shooting on a film camera with a fixed ISO, for instance), and the other settings will change to compensate.

Useful touches include a hold button to keep the current settings as you move around, and the ability to log photos, along with their settings, location, and any notes, to the app or Evernote. 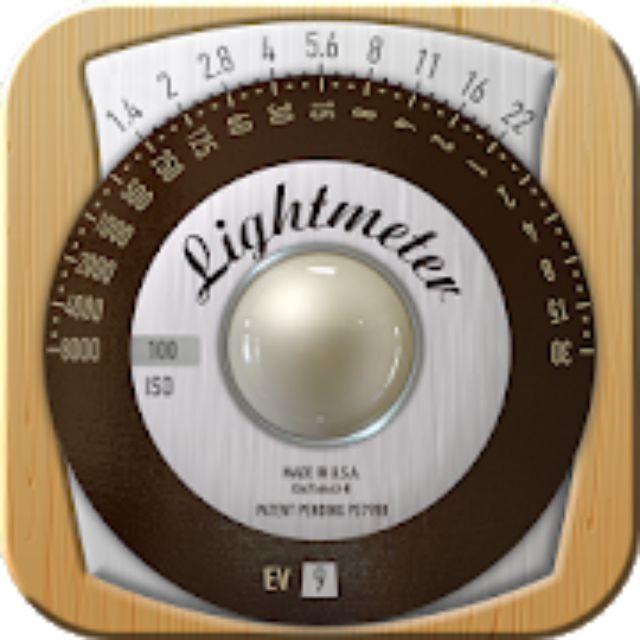 Pocket Light Meter isn't available on Android, but the appropriately-named LightMeter is a worthy substitute. As long as your phone has appropriate hardware support, the app can measure both incident and reflected light, with an attractive retro design.

As with any phone-based light meter, results will only be as good as the hardware on the device, but most recent mid to high-range phones deliver accurate information. ISO, f-stop, and exposure time are all clearly displayed, along with exposure value (EV).

You can hold incident light readings after measuring them, so you can return to your camera to apply them, and the app helpfully remembers your previous settings when you reload it. There are useful advanced features as well, including calibrating it for your particular device if needed. 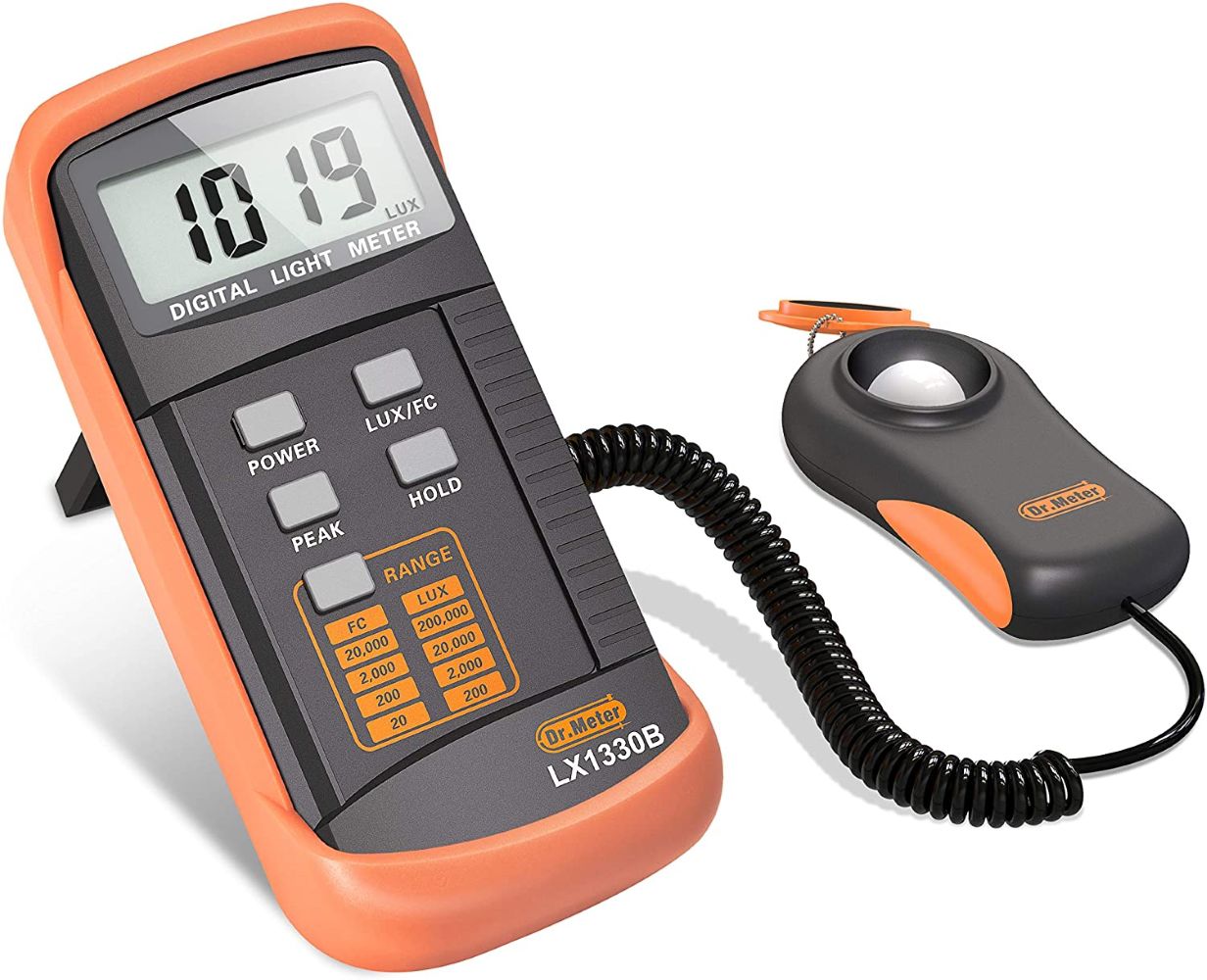 View On Amazon View On EBay View On Sears.com

It's no brand name, but the Dr.meter LX1330B is a light meter that can measure lighting quality and output in a studio or other environment without hitting your wallet too hard. The light meter works pretty simply, with a clear monochrome LCD panel that shows you the lux measure from 0 to 200,000 lux. It has four range settings for dynamic metering ability and high accuracy with auto zeroing capabilities. The buttons are fairly simply, giving you Data Hold and Peak Data to record information. Sampling rate is 2-3 times a second and the battery life is estimated to last 200 hours with a single 9V battery.

The best light meter for most people is the Sekonic L-208 TwinMate (view at B&H). It's an affordable analog light meter that can be mounted, and it has simple functionality that makes it to use. We also like the Kenko KFM-1100 (view at Amazon), it's a digital light meter that can measure both ambient and flash light levels, and even produce a lighting ratio for a scene.