The Yamaha RX-V385 offers a lot for its suggested price tag, such as a powerful 5.1-channel amplifier (70 wpc), Dolby TrueHD, and DTS-HD Master Audio decoding for Blu-ray Discs. Also, built-in Bluetooth allows direct streaming from compatible devices, such as smartphones, as well the ability for the receiver to send audio to Bluetooth-enabled speakers or headphones.

The SCENE function allows preset or customized listening and viewing modes. One feature I especially like is the Silent Cinema headphone surround output.

For ease of speaker setup, the RX-V385 includes Yamaha's YPAO system. Using an included microphone, the receiver generates test tones that it can analyze to get the best sound from your speakers in a given room.

Also included are four HDMI inputs and outputs that, in addition to 1080p, 4K, and 3D video signals, are also pass-through compatible with HDR (HDR10, Dolby Vision, and Hybrid Log Gamma) and Wide Color Gamut. However, the RX-V385 does not provide additional video processing or upscaling.

Also, although Bluetooth is provided, as mentioned earlier, the RX-V385 does not include built-in internet streaming capability. However, the front-mounted USB port allows the playback of downloaded music files from stored flash drives.

If you are planning to purchase a basic home theater receiver with useful features, power, and performance, the RX-V385 offers a worthy option. 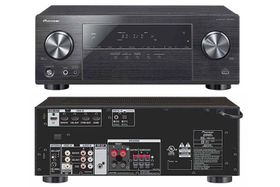 Pioneer's VSX-532 does not include access to internet radio or other internet/network streaming content, nor does it provide advanced Dolby Atmos/DTS:X audio decoding. But if you are looking for a no-frills home theater receiver that sounds sound and costs less than $300, the VSX-532 might be enough.

The VSX-532 provides up to a 5.1-channel speaker configuration, with a stated power output of 80 wpc (measured using 20 Hz to 20 kHz test tones, two channels driven, at 8 ohms, with 0.8 percent THD; in nontechnical terms, enough power for a small or medium-size room) and provides Dolby Digital Plus, Dolby TrueHD, and DTS-HD Master Audio decoding, as well as additional sound processing modes.

There are also four 3D, 4K, HDR pass-through HDMI connections. However, at this price, you won't get video upscaling.

Audio-only connections include one digital optical, one digital coaxial, and a dedicated set of analog stereo inputs. A subwoofer preamp output is also provided for connection to a powered subwoofer.

One added connection is a USB port for flash drives or other compatible USB devices.

Another surprise is the inclusion of built-in Bluetooth, which enables direct streaming from compatible smartphones and tablets.

If you are looking for a home theater receiver that emphasizes the basics, check out the 5.2-channel Denon AVR-S530BT, which has a stated power output of 70 watts per channel with a very low distortion level.

Some of the audio and video features included are Audio Return Channel, 4K, and 3D pass-through. However, in keeping with the basic nature of this receiver, no 1080p or 4K video upscaling is provided.

On the other hand, the AVR-S530BT's HDMI connections have been upgraded to comply with HDMI 2.0a with HDCP 2.2 specifications. In other words, support is provided for 60fps 4K, HDR, and wide-color-gamut video input signals.

Also, the AVR-S530BT provides a direct USB connection for accessing music from iPod/iPhone/iPad or USB flash drives, as well as built-in Bluetooth, which allows direct music streaming from compatible portable devices, including many smartphones and tablets. However, although you can stream compatible music content from smartphones and tablets via Bluetooth, the 530BT does not provide direct access to internet radio or streaming music services.

Another bonus is the inclusion of Denon HEOS Link. This feature allows users to integrate the 530BT into the HEOS wireless multiroom audio system via an intuitive app.

The AVR-S530BT can be controlled with the included remote via a free app for compatible iOS or Android phones/tablets.

If you are looking for an entry-level home theater receiver, check out the Sony STR-DH550. This receiver features up to a 5.2-channel configuration, Dolby TrueHD/DTS-HD Master Audio/Multi-channel PCM decoding, as well as additional audio processing. The four HDMI inputs are both 3D and 4K pass-through compatible (one HDMI input is also MHL-compatible), and HDMI output is Audio Return Channel-enabled. The STR-DH550 even offers a pass-through mode that allows access to HDMI-connected devices even if the receiver is off. One added bonus is that they include a front-mounted USB port for accessing content on flash drives or an iPhone, iPod, or iPad.

You also have the added flexibility to assign the surround back channels (channels 6 and 7) to function in a front Speaker B, Bi-Amp, or front height setup. However, the 770 does not have Dolby Atmos or DTS:X decoding, so the height sound effects are generated generically by the receiver's own home-grown audio processing.

For video, the STR-DH770 features four HDMI inputs and one output that support 3D, HDR, 1080p, and 4K pass-through, but has no additional video processing or upscaling. Either your source (DVD/Blu-ray Disc Player/Media Streamer/Cable/Satellite box) or your TV/video projector has to perform any needed video upscaling or processing.

On the other hand, one added bonus is the inclusion of built-in Bluetooth (with NFC), which allows direct streaming from compatible smartphones and tablets. However, Ethernet and Wi-Fi connectivity is not included, which means that the receiver cannot directly access internet-based streaming content. But if you have downloaded Sony's SongPal App to a compatible smartphone, via Bluetooth you can control the receiver, as well as access select music files that you have stored on your smartphone

In addition, if you have music stored on a flash drive or another compatible USB device, you can plug it into the front-mounted USB port.

What to Look for in a Home Theater Receiver Under $400

Connectivity - Before you buy a receiver, look at how many devices you want to connect and the methods you’ll use to connect them. Make sure that the receiver has enough HDMI, RCA, optical, and other inputs to accommodate all of your equipment. If you want any wireless connections, look for a receiver that includes Bluetooth, Wi-Fi, or both.

Audio formats - Most inexpensive home theater receivers support older codecs like Dolby TrueHD and DTS:HD. If you want the best surround sound experience possible, look for a receiver that supports the Dolby Atmos and DTS:X codecs.

Room correction - In this price range, built-in room correction software is one of the biggest difference makers in terms of audio quality. It takes a little extra work to use this feature, but you’ll really notice the difference if you choose a receiver that has great room correction.