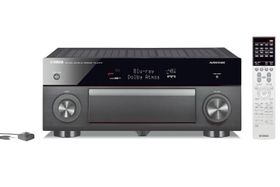 If you are looking for a home theater receiver that bridges the gap between mid-range and high-end, consider the Yamaha AVENTAGE RX-A1070.

With great performance and an abundance of features, the RX-A1070 can serve your home theater receiver needs for a long time.

Audio connectivity, in addition to HDMI, includes both digital optical/coaxial, and analog input options (including a dedicated phono/turntable input), as well as two subwoofer outputs. Also, both powered speaker outputs or preamp outputs provided for an additional wired Zone. The RX-A1070 even provides 7.1 channel analog preamp outputs so that you can connect it to several combinations of external amplifiers.

To make speaker setup easy, the receiver has a built-in test tone generator that works in conjunction with a provided microphone and internal firmware (YPAO) that determines the size, distance, and frequency profile for each speaker and determines optimum output levels for your room.

The RX-A1070 also allows wired or wireless (via Ethernet or built-in Wi-Fi) audio streaming from other devices, such as a PC or media servers connected to a home network.

Also, although the RX-A1070 does come with its own remote control, it can also be controlled conveniently by an iOS, Android, or Kindle Fire device.

The Marantz SR5012 Network Home Theater Receiver might be a great choice for your home theater setup. First off, it has unusual front panel styling. However, behind that stylish front, this receiver provides up to a seven channel speaker configuration, including the ability to connect two subwoofers via preamp outputs, Dolby Atmos (5.1.2 channel configuration) and DTS:X decoding capability for a fully immersive surround sound experience.

Another feature worth noting is the inclusion of both 5.1/7.1 channel analog audio inputs and preamp outputs, which is becoming rarer these days, even on some higher-end receivers. Also, for added connection convenience, the speaker terminals are color coded by channel and widely spaced across the bottom of the rear panel.

Besides solid core audio and video features and performance, the SR5012 also provides media player and networking functions with USB ports, DLNA certification, and internet access to music streaming services, such as Pandora, Sirius/XM, and Spotify. Apple AirPlay compatibility is also provided, so you can stream music from your iPhone, iPad, or iPod touch as well as from iTunes libraries. Also, wireless Bluetooth capability is included for direct streaming from compatible portable devices.

However, another big bonus is the incorporation of the Denon/Marantz HEOS multi-room audio system platform, which allows you to stream music content from the receiver to compatible HEOS-branded wireless speakers that you can place around the house.

The above summary is just the tip of the iceberg. The Marantz SR5012 is probably most flexible home theater receiver available that is priced less than $1,000 - definitely worth checking out.

The Yamaha RX-V683 is an example of how much a home theater receiver can offer without digging too deep into your wallet.

This receiver has a powerful 7 channel amplifier (90WPC - measured with 2 channels driven) and a preamp output for connection of a powered subwoofer. Most Dolby and DTS surround sound formats are supported, including Dolby Atmos and DTS:X. In addition, AirSurround Xtreme-based Virtual Cinema Front audio processing is included for those that would rather place all their speakers in the front of the room. This provides a speaker setup option for smaller spaces.

The RX-V683 includes Yamaha's YPAO automatic speaker setup system, as well as excellent onscreen diagrams and easily understood setting options if you would rather do your speaker setup manually.

Just as with other Yamaha home theater receivers, Silent Cinema is included. With Silent Cinema, any set of headphones or earphones can be used for listening to movies or music in surround sound without disturbing others. Perfect for late night private listening!

The RX-V683 can also access iTunes and additional music streaming from an iPod Touch, iPhone, or iPad via Apple AirPlay. The receiver can also play music stored on USB flash drives, as well as PCs connected to a compatible home network. The RX-V683 provides both Ethernet and Wi-Fi.

HDMI Audio Return Channel is provided, as well as 3D, 4K, Wide Color Gamut, and HDR (including HDR10, Dolby Vision, and Hybrid Log Gamma) pass-through, and 1080p to 4K upscaling. There are a total of 6 HDMI inputs and 1 output.

In addition to the provided wireless remote, you can also download Yamaha's AV controller app to a compatible smartphone and control the receiver's setup, operation, and content access from there.

Another outstanding feature is the inclusion of Yamaha's MusicCast. Working in conjunction with the free MusicCast App, you can not only stream music from the receiver's built-in AM/FM tuner and streaming services, such as Pandora, Spotify, Deezer, TIDAL, Sirius/XM, but you can also stream any connected audio source (CD player, turntable, DVD, Blu-ray, USB flash drive, etc...) to any compatible Yamaha MusicCast-enabled wireless speakers, such as their WX-010 and WX-030. MusicCast can stream music to up to 9 compact wireless speakers. However, keep in mind that the system currently does not provide wireless support for surround sound. 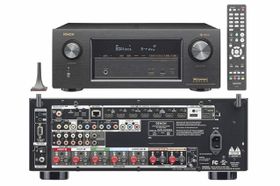 The AVR-X2400H InCommand home theater receiver combines very good audio and video performance with an abundance of up-to-date features, and the price isn't bad either.

On the audio side, the AVR-X2400H provides up to a 7.2 channel speaker configuration supported by Dolby TrueHD/DTS-HD Master Audio decoding, with the added bonus of including both Dolby Atmos and DTS:X Decoding capability.

You can also send select audio sources connected to the AVR-X2400H to a two-channel Zone 2 system, with the use of an external amplifier.

For video, this receiver provides 8 (7 rear and one front) HDMI inputs, with 3D, 4K (up to 60Hz), expanded Color Gamut and both HDR10 and Dolby Vision high dynamic range pass through, as well as 1080p and 4K upscaling. Also, two parallel HDMI outputs are provided that allow you to display the same images on two displays (or a display and a video projector) at the same time.

The AVR-X2400H also includes both network and internet streaming access (including (vTuner, Pandora, Sirius XM, and Spotify), via either Ethernet connection or built-in Wi-Fi. In addition, built-in wireless Bluetooth and Apple AirPlay are included, as well as built-in support for the HEOS wireless multi-room audio platform.

The AVR-X2400H is definitely a flexible mid-range home theater that provides solid audio performance, up-to-date video connectivity, and the expandability for both 2nd Zone and wireless multi-room audio applications.

If you are looking for an affordable Home Theater Receiver that has surprisingly good audio performance, consider the Sony STR-DN1080.

The STR-DN1080 has flexible surround setup options, providing both a 7.2 channel speaker configuration or a 5.1.2 channel Dolby Atmos or DTS:X setup that includes vertically height or overhead speakers. Also, for those with limited space, there are additional options. With Phantom Suround back, you can experience a 7 channel surround effect with only 5 speakers, and S-Force Virtual Surround provides a limited surround effect with only 2 front speakers.

It is important to note for those that have older video gear, that while the STR-DN1080 does provide 2 composite video inputs, it does not include any component video inputs.

In addition to core audio and video features, the STR-DN1080 includes both network and internet streaming access (Google Chromecast for Audio built-in - also works with Google Home) via either Ethernet connection or built-in Wi-Fi, and also provides Bluetooth (with additional one-touch NFC support) for direct streaming from compatible portable devices.

Another added bonus is that with Sony's SongPal app, you can incorporate the receiver into a wireless multi-room audio system by combining it with other compatible Sony wireless audio products.

If you looking an affordable home theater receiver with connection/content access flexibility for a variety of setups and needs, as well as good sound quality, definitely consider the STR-DN1080. 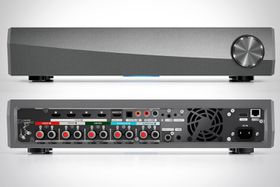 While most home theater receivers are still large boxes that seem to provide everything but the kitchen sink, some receivers take a different approach that places more emphasis on slim profile design, streamline connectivity, and big emphasis on wireless multi-room audio. One example is the Denon HEOS AVR. HEOS stands for "Home Entertainment Operating System".

On the traditional side, the HEOS AVR incorporates a 5.1 channel configuration, as well as Dolby TrueHD/DTS-HD Master Audio decoding and additional surround sound processing, as well as 4K HDMI pass-through connectivity.

The HEOS AVR has a modest output of 50 wpc when using all of its internal amps, but when using the wireless surround speakers, the rear surround power output will be less.

In addition to wireless surround, the HEOS system can also send music around the house to additional compatible wireless speakers.

Additional audio features include music playback via USB (which includes Hi-Res Audio), and direct streaming from compatible smartphones via Bluetooth. Also, both ethernet and Wi-Fi are included for access to several online music streaming services.

All control functions have to performed either via the provided remote control or on a smartphone via Denon's remote control app - The only onboard control on the receiver is the master volume control.

If you are looking for an easy-to-set-up and use home theater receiver that has a stylish look, and cuts out the fat, the Denon HEOS AVR is definitely one option to consider - especially if you have a small or medium-size room.

What to Look for in a Mid-Range Home Theater Receiver

Power output - The more wattage, the better, right? Not necessarily. Different manufacturers base their advertised power outputs on different specifications, so you should be careful when comparing them. You must also consider the size of your room, as well as the power requirements of your speakers.

Connectivity - In all receivers, you’ll have speaker connections, plus connections for subwoofers and other components. However, the increasing use of HDMI has resulted in many manufacturers dropping some of these additional component connections. Look for HDMI connections that support the most recent standards (HDMI 2.0/2.0a or HDMI-MHL).