It's time to bring the movie theater into your home

Adam S. Doud
Writer
Adam has been writing about mobile technology since 2011. He is the former host of the Android Authority podcast, and his work has appeared in numerous publications.
lifewire's editorial guidelines
Fact checked by
Rich Scherr


The best 4K and 1080p projectors will cost you a pretty penny. But the benefits of high-definition projectors quickly become obvious when you see what kind of picture is available from a relatively small box. There are a lot of lower-quality projectors out there, which will get you by if you want to have a nice movie night. But a high-definition projector can give you just as good an image on any surface in your home or office. The versatility is what makes these projectors worth their price tags.

Not every space is conducive to a TV or an extra monitor, but most spaces have walls, which is all a good projector really needs. Even the ceiling will suffice if you want to watch something while laying in bed. There aren't a lot of ceiling-mounted TVs out there, but a projector can put an image anywhere you can aim it. Flexibility for the win!

BenQ makes really great projectors, and that's true here in the BenQ HT3550. This projector offers truly great color accuracy. It's tuned in the factory for the best color output you can find, and it shows right out of the box. The BenQ is a great 4K find at just under $1,500, which is really low for a 4K projector.  Our tester found that its 2,200 lumens were quite bright enough for broad daylight, which can be challenging for many projectors.

Unfortunately, slow is a bit of a theme for this projector, since our tester also noted slow boot-up and shut-down times. Maybe that won't bother you if you have a few extra seconds on each end, but we also noted a bit of lag when it comes to gaming. Single-player games run just fine, but when you get into a multi-player setting, and especially a competitive setting, the 50ms of input lag can affect your overall performance. If you're not into online gaming or battle royales, that probably won't make much of a difference to you. Given its price, we consider that to be an acceptable compromise, but if you're a competitive gamer, you'll want something with much lower latency. 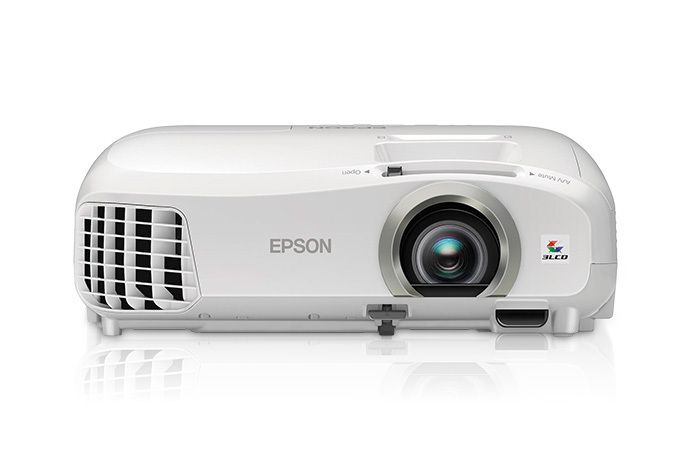 If your budget doesn't fit the 4K lifestyle, 1080p still is really good, and the Epson Home Cinema 2040 delivers just that for a good price. Its screen size ranges from 90 inches to 134 inches, depending on placement, so your movies will be totally immersive. At 2,200 lumens, the projector delivers a bright, crisp picture, even in rooms with some ambient light. The projector also comes with an Eco mode, which will lower your power usage and lengthen your lamp life, which is good because 4,000 hours is not terribly impressive lamp life.

The projector also has a ton of inputs and outputs with 2HMDI, 1 RCA (composite), 2 RCA (1 audio, and 1 L/R stereo), VGA, and USB Type-A. You can input from basically anything. The projector delivers all this at just a whisper quiet 37db. For reference, 30db is a quiet rural countryside. 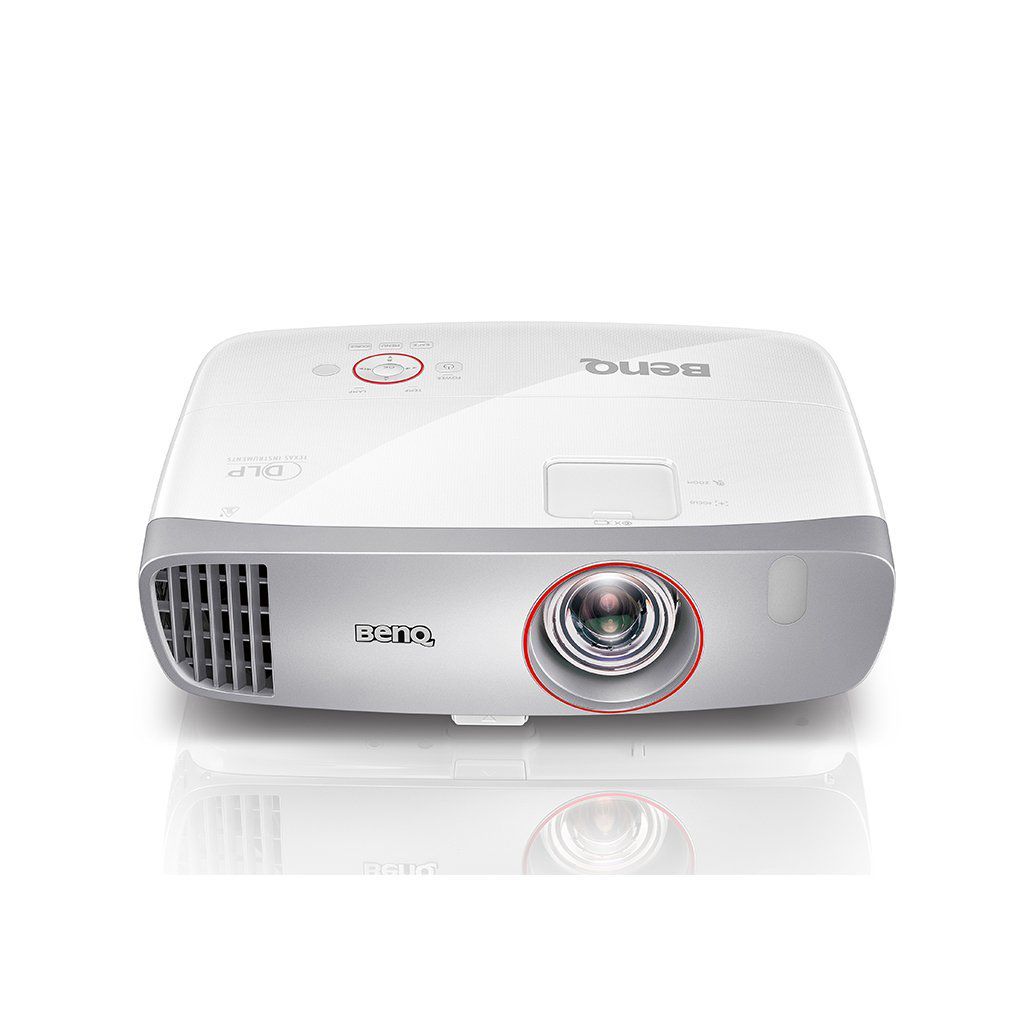 Courtesy of Amazon.com
View On Amazon View On Walmart View On Best Buy
What We Like
What We Don't Like

Movies and boardroom presentations aren't the only use for projectors.  Let's talk about gaming. If you want to get your game on in high resolution, the BenQ HT2150ST is for you. This projector boasts a 15,000:1 contrast ratio for great detail in darker scenes. Plus, the 2,200 lumens will work in just about any room, even one that sees light from the outside. But most of all, this projector was built for gaming, with low-input lag from your game system and controllers. That's key when you're gaming.

This is a short-throw projector, which means it can fill up to a 100-inch screen from just under 5 feet away. That's a ton of coverage and versatility, meaning you can use this projector in any tight space, including a bedroom or a dorm room. One minor issue is a slight variance in luminance from edge to edge of the screen. During normal use, it's hard to see, but in our testing, it became pretty clear. All the same, our reviewer considers it a minor issue, but still one worth mentioning. 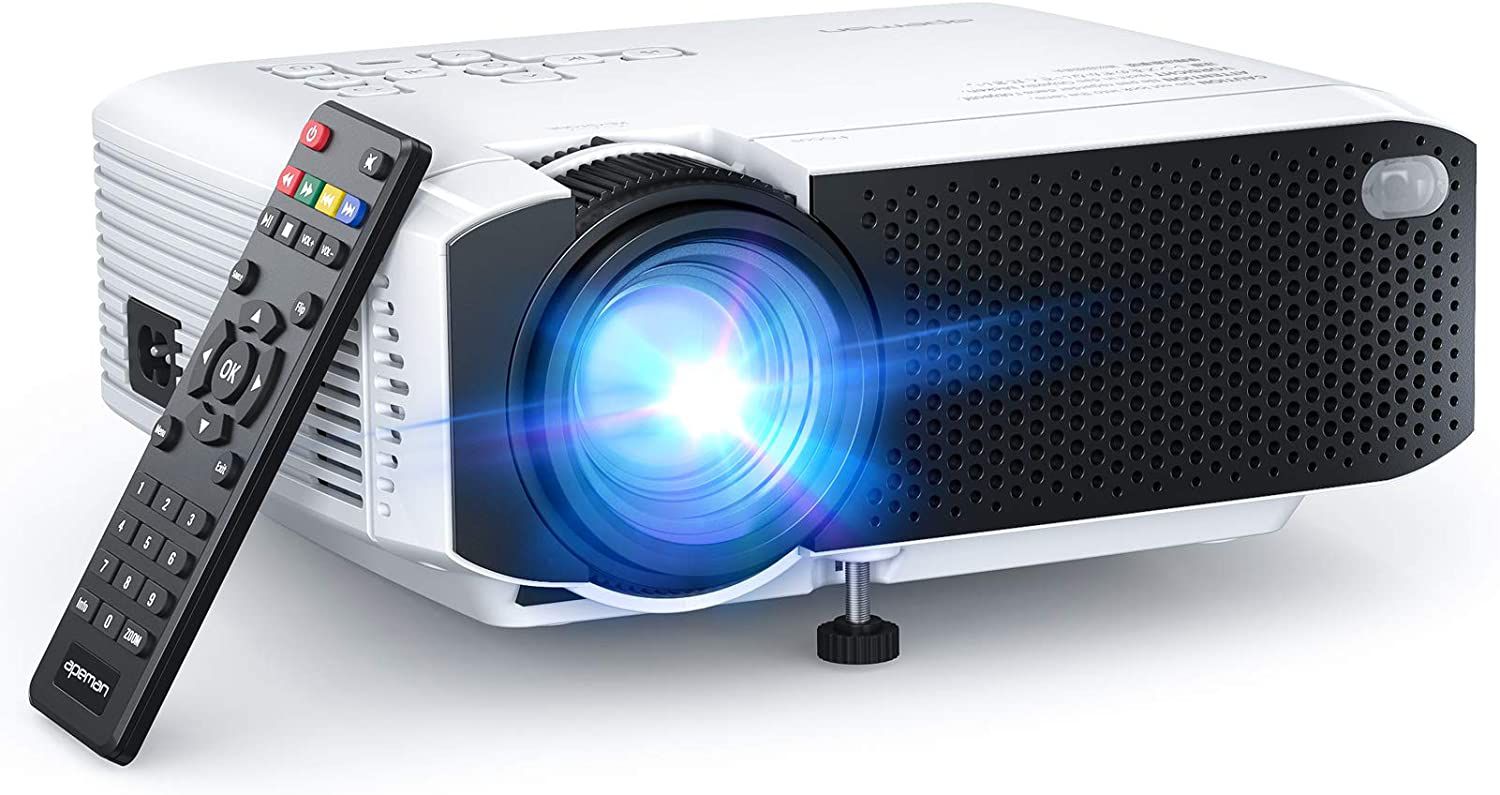 For its price, the Apeman LC350 sure does look tempting. With a projector light of 4,500 lumens, you'll surely get a bright picture even in a lighted room.  Unfortunately, that's where the positives start to run out.  This projector has a native resolution of just 800x480p which is not bad for this price point, but when you add in the low contrast ratio, darker footage starts to get grainy and hard to see.

There is a USB port in the device, but it's limited to just USB drives. It's not powered to run a dongle off of it, nor does it support data transfer cables from your phone. The controls on the back of the projector also are white on white, so they can be hard to see in the dark environment that a projector usually needs. If you have a little more to spend, you can find better options. 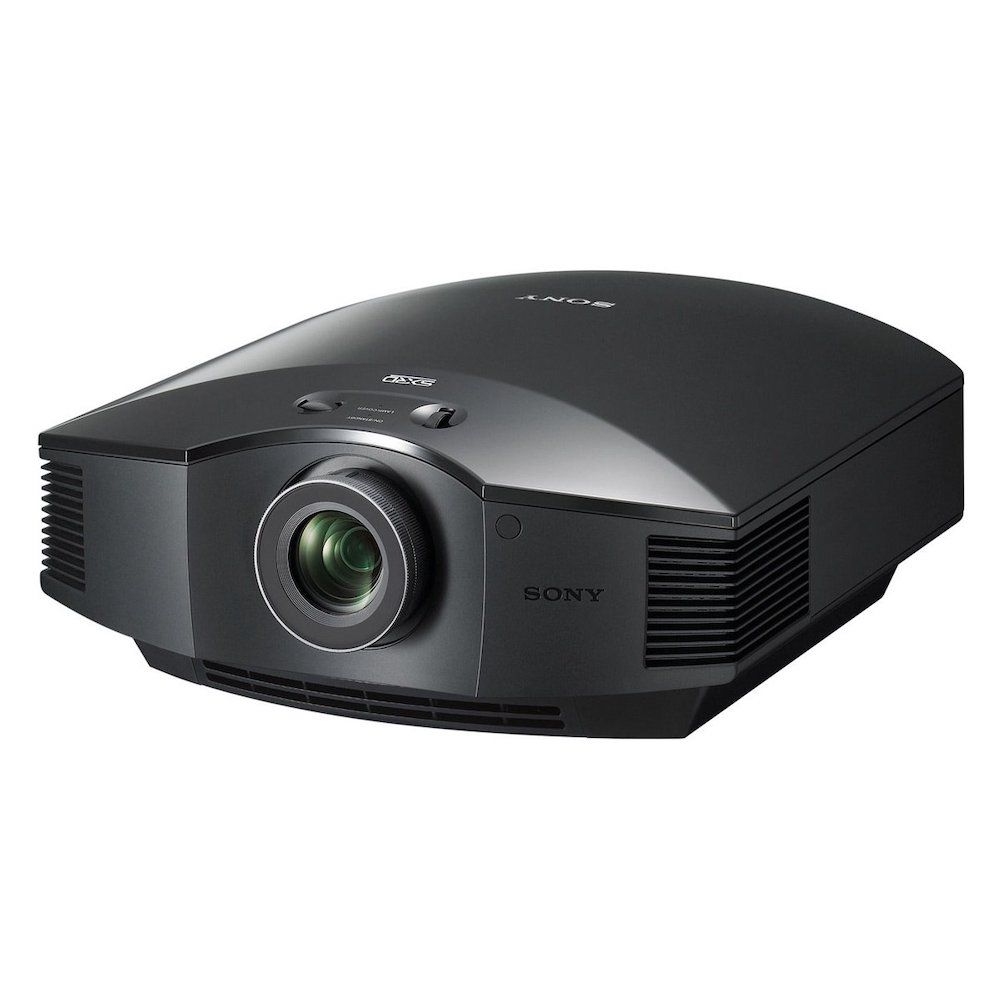 Sony is well known for its imaging technology. From cameras to TVs to the PlayStation, Sony is synonymous with optics and entertainment. So it's no wonder to find Sony on our list of projectors, as well. The company is bringing its A-game with three SXRD chips, which enhance color accuracy and can process your video to make it seem even closer to 4K.

One other perk of this projector is that it supports 3D imaging, as well, so your immersive movies can go even further. Plus, with 1.6x zoom, you can place this projector far away from your screen and still get a clear picture. The front-facing fan is great, because if you place your projector into a recessed space, or near a wall, it will still have good airflow from the front.

The projector only goes up to 1,800 lumens, so you'll want a darker environment for sure.  Plus, its price tag is up there, compared to other projectors of similar quality. 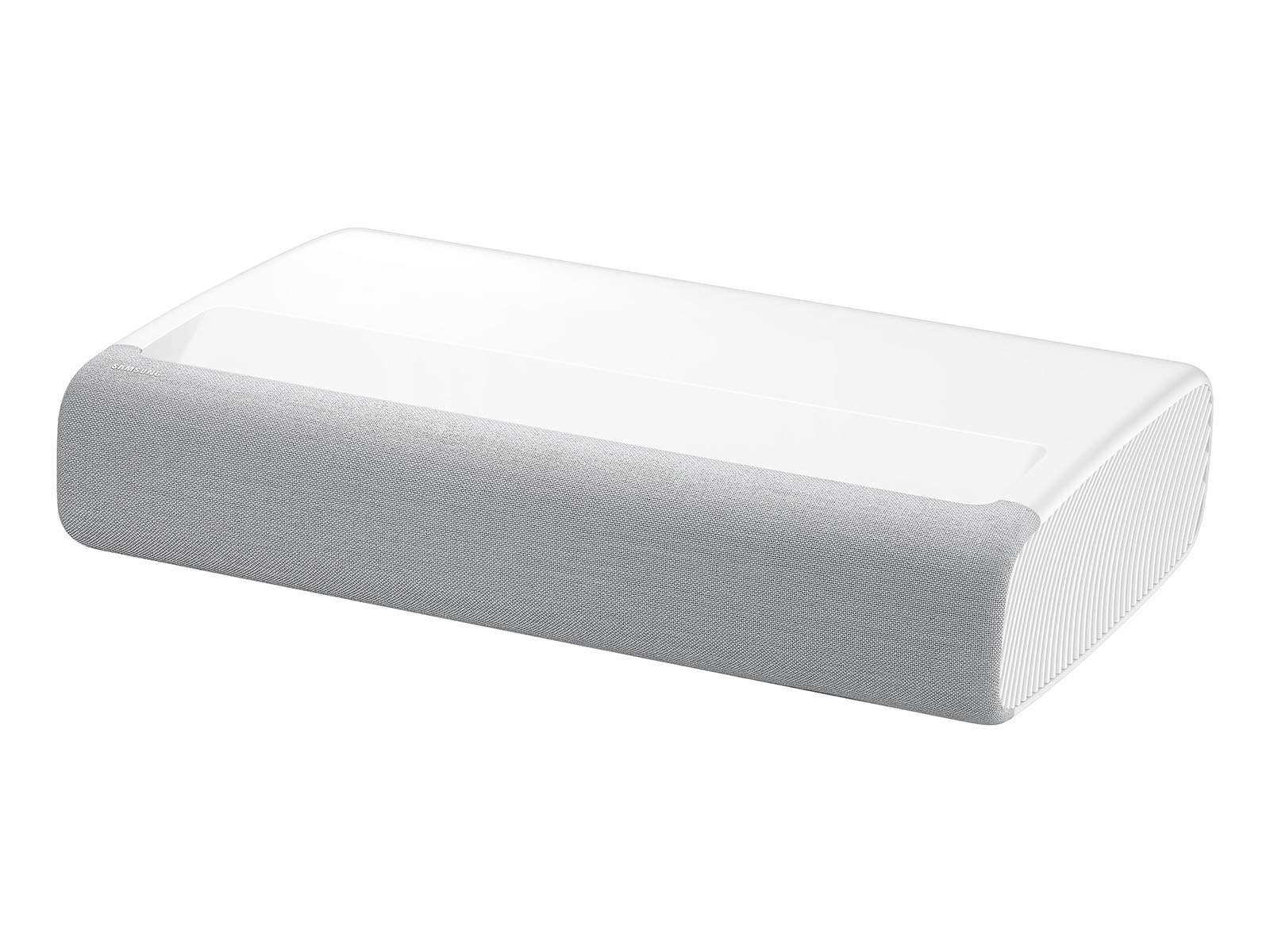 This projector can be described in just one word—wow! This projector has all the bells and whistles you could ask for in an entertainment system. This is an ultra-short throw projector, which means it can fill a wall only inches away. The projector is 4K UHD with a triple-laser projection system. It has built-in surround sound, and it's a smart TV, as well. This projector is powered by Tizen, Samsung's home-grown operating system, and has all the apps you could need. Plus, you can choose any of three digital assistants to use: Bixby, Google Assistant, or Alexa.

Of course, all that wow comes at a price. It's a very high price and, in fact, is the highest on this list, which already has several four-figure prices. But, for a device with such a low profile that it almost melts into the furniture, you'll get a ton of quality and one of the best projection experiences you can buy, short of a full movie theatre. 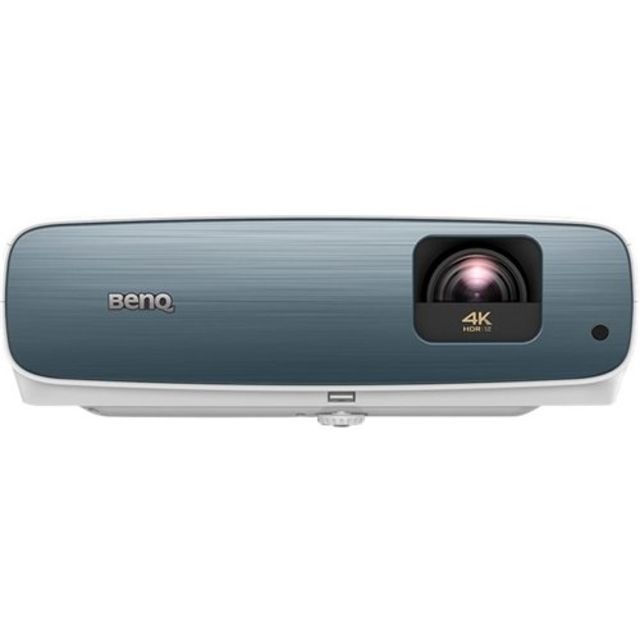 BenQ is one of the leading projector manufacturers out there, and the TK850 is loaded for bear. The 4K resolution of this projector is sharp, even from a distance, with the 1.3x zoom lens. This projector is optimized with HDR Pro for great contrast, even in well-lit environments. The 10-element lens array allows the projector to span from a 60-inch screen to a 120-inch screen from varying distances.

There's an array of inputs on the back of the projector, including 2 HDMI, USB Type-A, VGA and a 3.5mm output for speaker connection. That's not as many inputs as you can find in other projectors, but it's sufficient for most applications.  The projector is also backed by a three-year warranty. 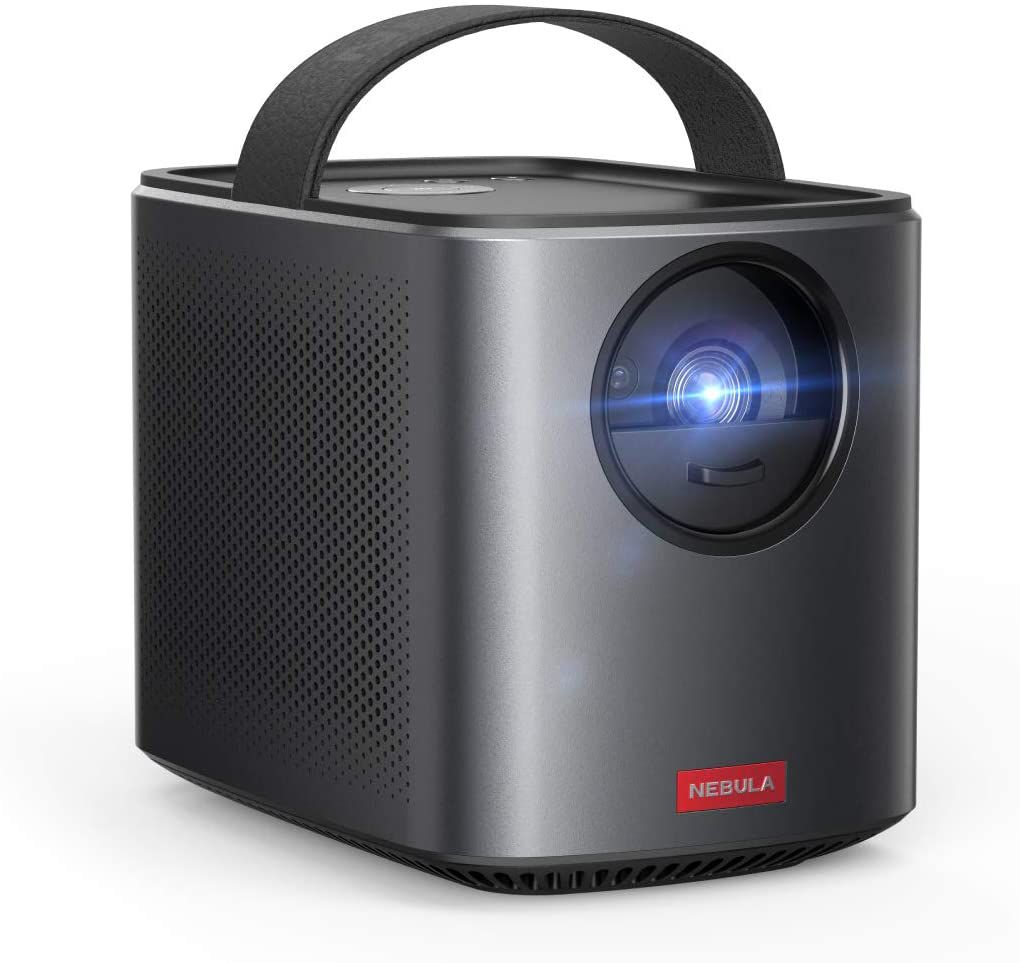 Our last entry is by far the most portable of the bunch. It even has a convenient handle on the top. The projector scales up from 30 inches to 150 inches, but, unfortunately, only at 720p and only at 500 lumens. Keep this projector in a dark room. You can use your smartphone to control the projector, which makes it more versatile than others.

One of the best parts about this projector is the installed Android operating system. It's Android 7.1, which is outdated, but brings along app functionality like a smart TV. Those apps allow you to stream content to your projector without connecting to anything. But with as low resolution and brightness as this projector offers, it costs too much to justify.

Bottom line, the Optoma UHD60 4K Projector brings an amazing experience to the table, plain and simple. It's not the most expensive on the list, nor does it necessarily have all the bells and whistles of other entries, but it brings high quality, while still retaining value for your dollar..

If your budget doesn't quite fit that projector, the BenQ is a very good brand and the BenQ HT3550 might fit the bill instead. Our reviewer says that this projector will change the way you consume 4K content, and that's quite the statement. Either one of these projectors will give you an experience that is downright amazing.

About Our Trusted Expert

Adam S. Doud has been writing and reviewing technology in this space for almost ten years. He's always looking for the next portable entertainment solution and he's watched more than a few Netflix shows on his ceiling.

What to Look for in a Projector

Contrast Ratio - Contrast ratio is determined by the difference in color from the brightest bright that a projector can achieve and the darkest black. The reason this is important is because it allows your projector to display a full range of color without getting too grainy or washed out.  In terms of contrast ratio, it will be in a the form of a number:1 like 1,000:1, or 1,000,000:1.  You want the first number to be as high as possible.

Lumens - Lumens determines how bright the projector's light is. The higher the lumens, the brighter the picture. This mainly comes into play when you have well-lit rooms. Dim projectors can project just fine in the dark, but it takes high lumens to cast a good, crisp picture in a bright room. If you plan on adorning a home theater that's dark, you can get away with a lower number. If this will be in your living room, higher is better.