The Best HDMI Switchers of 2023 for Console Flexibility

Adam S. Doud
Writer
Adam has been writing about mobile technology since 2011. He is the former host of the Android Authority podcast, and his work has appeared in numerous publications.
lifewire's editorial guidelines

If you know you need an HDMI switcher but don't want to get bogged down in details, our experts think you should just buy the Kinivo 550BN HDMI switcher: It has the right price, the right amount of inputs, and it really just works.

One of the most annoying things about TVs is the limited number of ports to connect things like streaming boxes and games consoles. An HDMI switcher gets around this, adding more ports by letting several devices share the same cable into your TV.

One key thing to make sure of when you buy is that you get a switch that supports the highest resolution you'll need. The two main options are HD, which is a little cheaper, and 4K, which is also known as ultra HD, and gives a sharper picture. 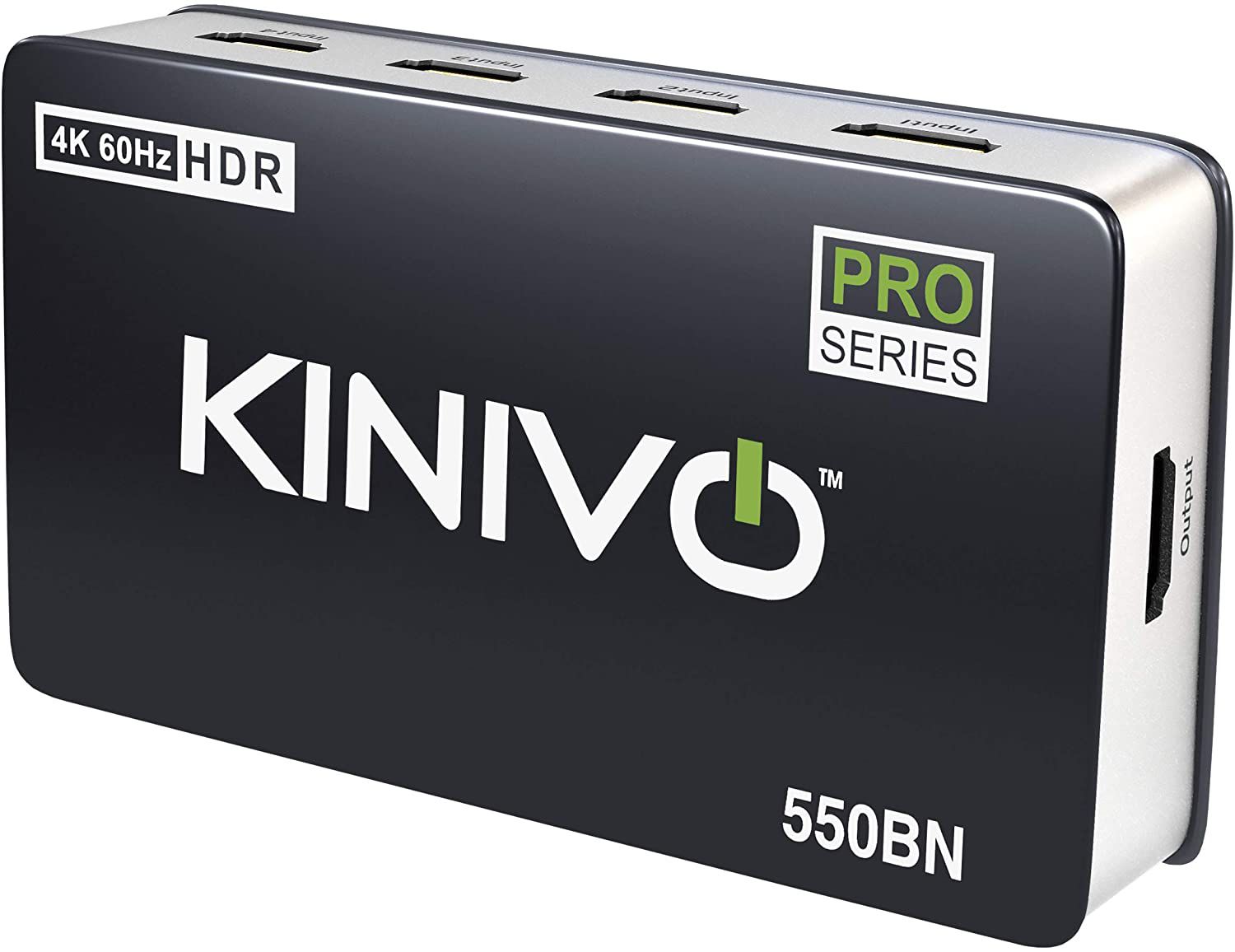 The ability to connect multiple devices to one display is the biggest draw of an HDMI switch, and the Kinivo 550BN handles this task reliably. Designed with power users in mind, it supports up to five HDMI inputs for a single output. Our reviewer Emily Ramirez tested it for weeks with a BenQ HT3550 4K projector and felt like it was a match made in heaven.

The Kinivo does come with some cable management issues. Since all of the ports are lined up along one side, it's hard to organize the cables in a pleasing manner. That said, it's simple and pleasant to use, and it's competitively priced.

While the Kinivio 550BN is slightly unattractive, it's packed with features. It can display 4K at 60Hz, comes with automatic switching, and supports Dolby digital encoding. It even has a two-year warranty. But, it doesn't have an HDMI splitter built-in, which means you need to use a 3rd party solution if your sound system is separate from your display. Overall, the Kinivo 550BN delivers on its promises. It takes about nine seconds to switch between inputs, which isn't terribly fast, but videos played beautifully. Gaming was a similarly seamless experience, with no noticeable lag between the controller input and the display. — Emily Ramirez, Product Tester 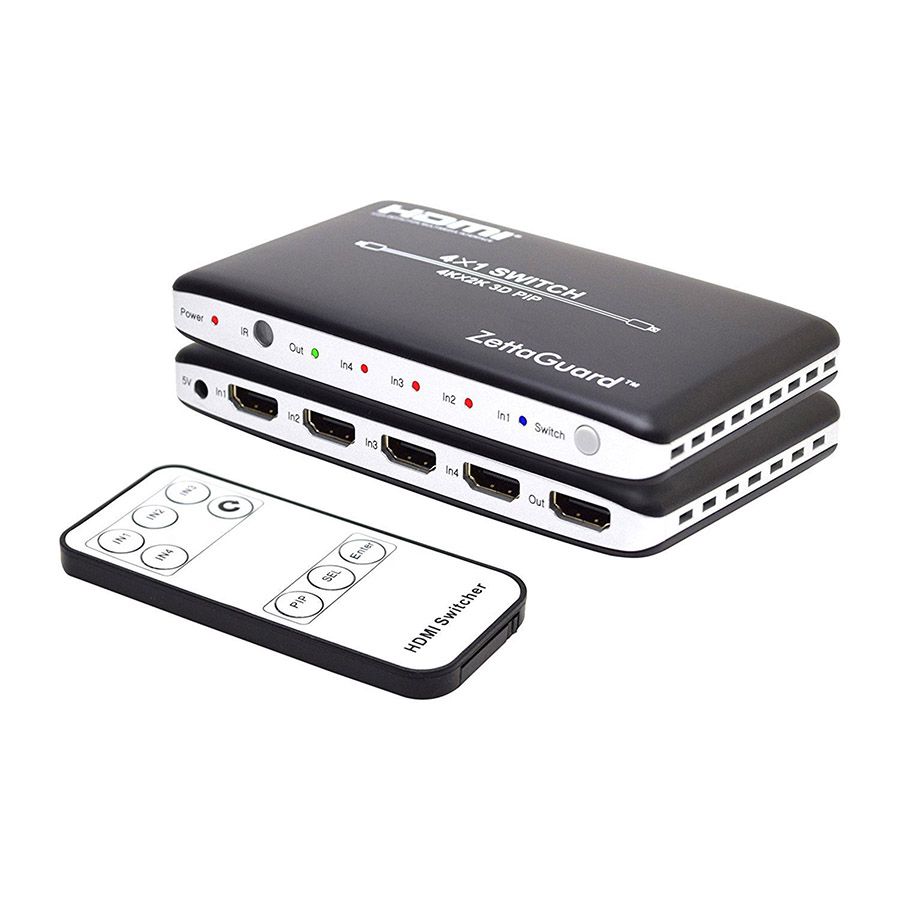 If you're looking for a thoughtfully designed HDMI switcher with a premium look and feel, the Zettaguard 4K is worth some consideration. Our reviewer tested it for weeks and thought the 4K content she streamed on her PC looked great, with the HDR coloring really making the videos pop.

The Zettaguard 4K could've been our top pick. The picture-in-picture (PiP) preview mode alone almost had us, but the switcher is held back by having only four inputs and no HDMI audio splitter. The included remote has a dedicated PiP button that lets you view all active inputs simultaneously, along with a button for each HDMI input.

The Zettaguard Upgraded 4K 60Hz 4x1 HDMI Switcher is a solid entry in the HDMI switcher market. The chassis is unassuming and sturdy, installation is straightforward, and the thoughtfully placed ports help with cable management. It took about nine seconds for the switcher to change inputs, putting it right in the middle of the products tested. Video games ran smoothly, with no noticeable latency, thanks to an 18Gbps transfer speed. — Emily Ramirez, Product Tester 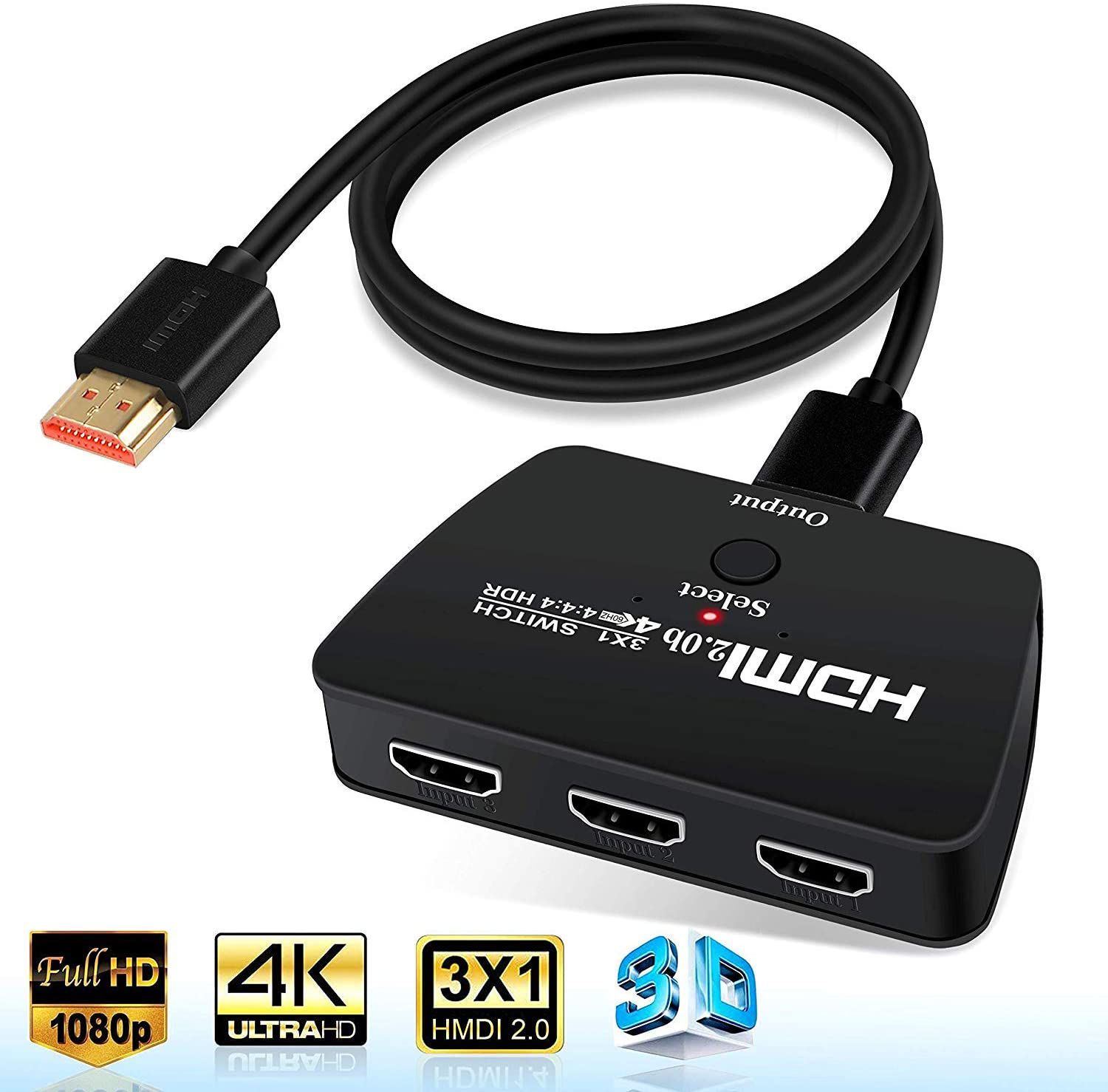 Not everyone has a lot of devices they need to connect. Sometimes, three inputs are enough. We like the Newcare HDMI switch, but it is limited. You do pay less, sure, but with so few inputs (on opposite sides again, grrr) and the lack of a remote, this switch is best for smaller systems and small budgets. If that’s you, you won’t have any trouble with it. 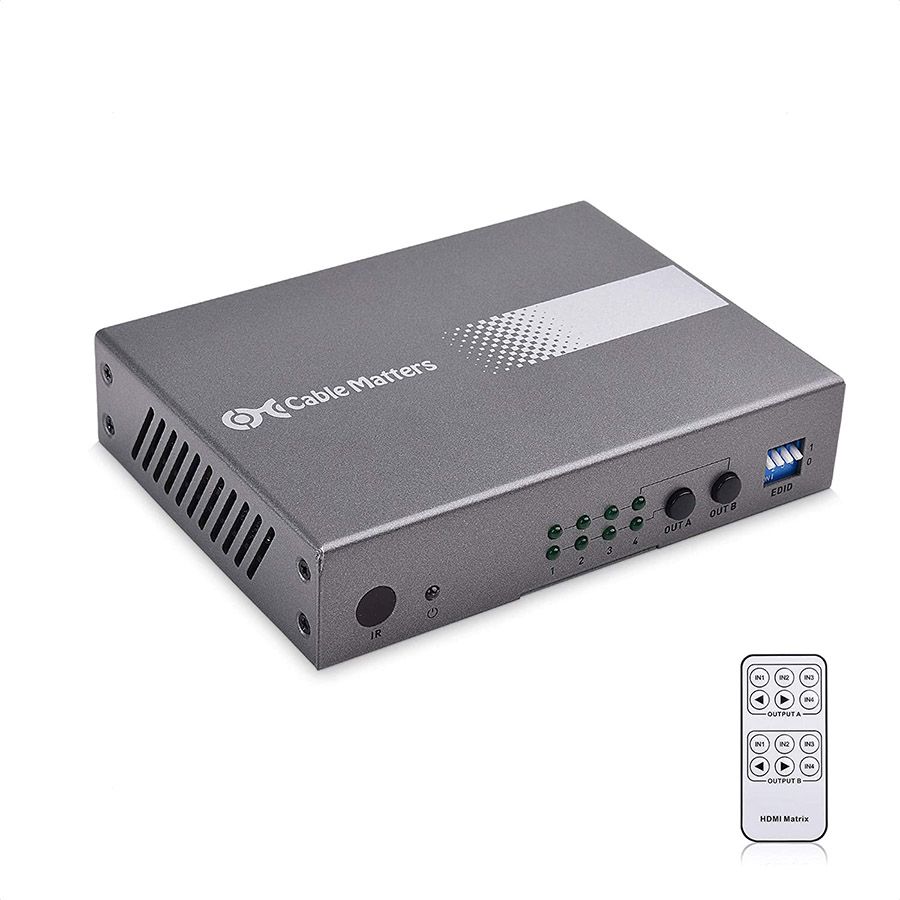 If you have a multi-monitor setup and need four inputs and two outputs, your choices are pretty limited. However, the Cable Matters 4K 60 Hz Matrix Switch is the one we’d pick. It supports the right protocols and even supports audio switching. Sure it’s pretty niche, but we’re glad it’s out there. 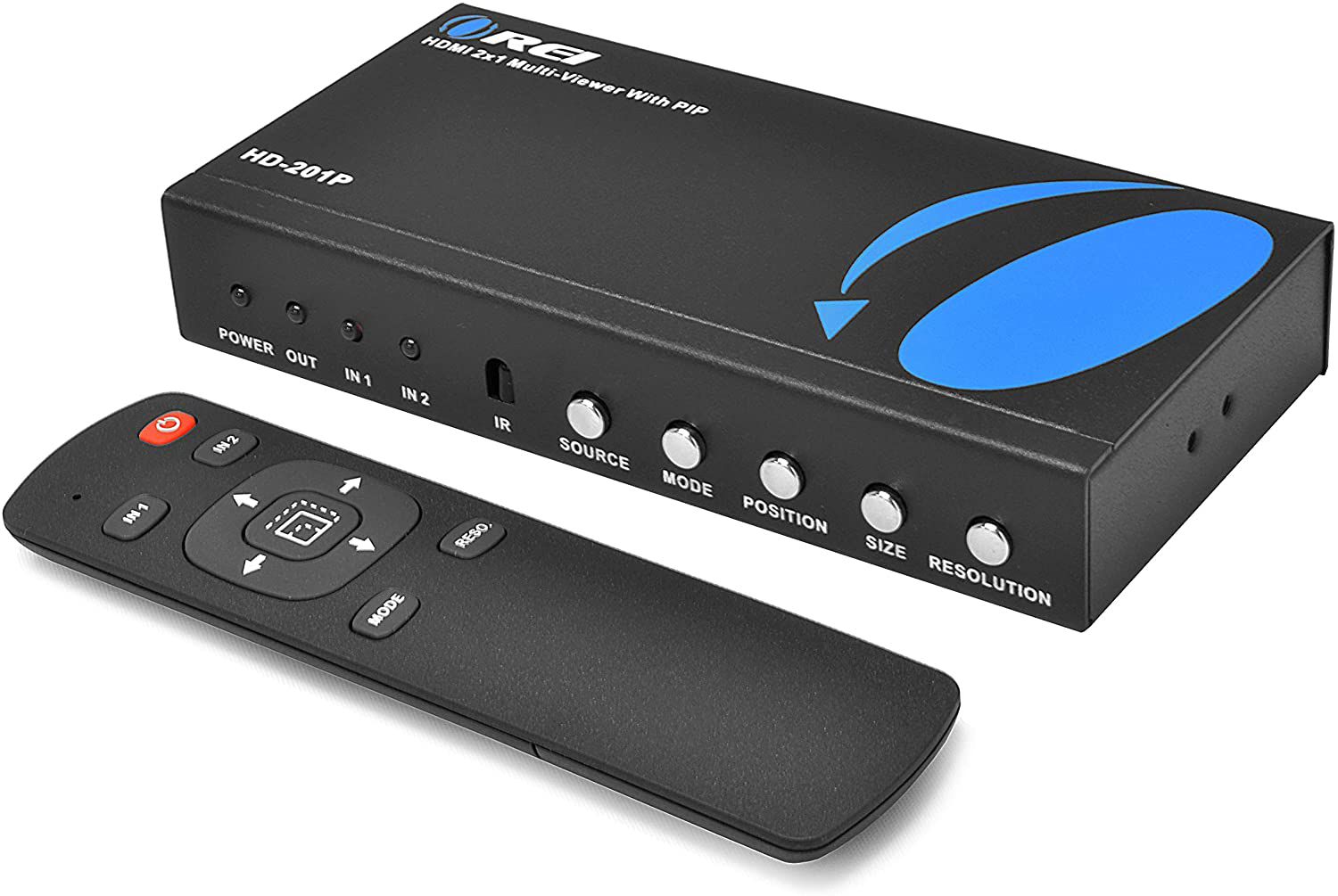 One of the more common uses of an HDMI switcher is picture-in-picture, allowing you to watch two videos sources at the same time. If PiP functionality is a must for you but 4K isn’t, then we can recommend the Orei HD-201P.

This switcher excels at advanced PiP (again, only in HD and specifically the 1080p/1080i formats) and supports a whole bunch of advanced audio formats, so if you've got a home cinema setup, you're good to go, with support for PCM2, 5.1, and 7.1 surround sound, Dolby 5.1, and DTS 5.1. This is another niche product, but like above, we’re glad it’s available. 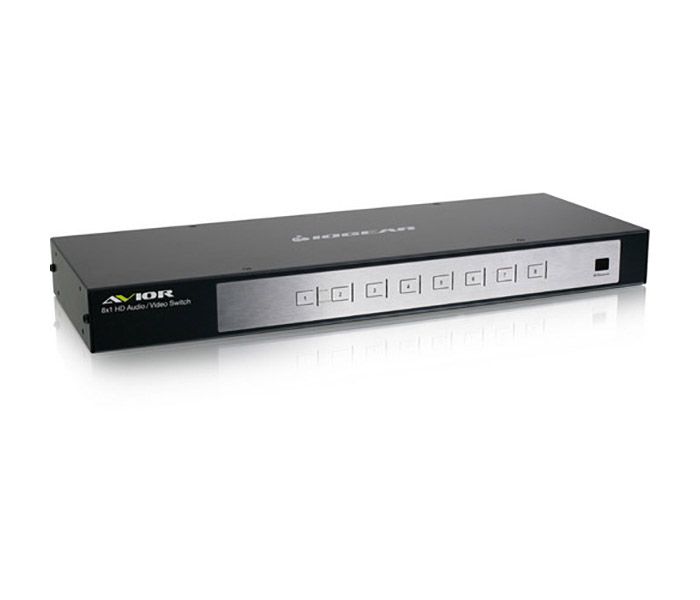 Some home and professional theater setups require more inputs. This box has eight inputs and a single output for the largest of systems.

If you must have a lot of inputs, you’ll have to deal with 1080p/1080i output. For the price, we'd like to see 4K support, especially in this day and age. But, with eight inputs, it’s about the only game in town (and the only one we recommend).

Overall, we really love the Kinivo 550BN (view at Amazon). It features five inputs and one output, can handle just about every format, and is small and unobtrusive. It also comes with a super convenient remote for easy switching if you have the unit tucked away in a your setup. If the Kinivo isn’t available, then grab Zettaguard 4K HDMI switcher (view at Amazon). It has one fewer port, but is otherwise as solid as the Kinivo (and thanks to its rear ports, an overall neater product). It’s less expensive, too.

What to Look for in an HDMI Switcher

"Home users generally need two to four ports. However, they can go up to an 8-port switch depending on the number of sources they want to connect to a display." — Christian Young, Pro AV Product Manager, ATEN Technology, Inc

HDMI switchers available for consumers are at least 1080p and Dolby Digital/DTS compatible.

If you have a 4K Ultra HD TV and 4K source components, the switcher also needs to be 4K compatible. If you need to pass HDR-encoded and/or 3D video signals, your HDMI switcher needs to have those capabilities.

"Image quality should not be affected by the HDMI switchers because the source is digital. If the quality of the image is decreased, it can be attributed to a poor connection, damaged cables, or to the quality of the switcher." — Christian Young, Pro AV Product Manager, ATEN Technology, Inc

HDMI switchers plug into AC power and usually come with remote control for more convenient source selection. Some HDMI switchers also incorporate HDMI-CEC support, which allows the switcher to automatically go to the correct input of the most recently activated device.

As mentioned above, all HDMI switchers pass standard Dolby Digital and DTS Digital Surround audio signals, but if you are routing the output of the switcher through a home theater receiver (instead of going directly to the TV) that provides decoding for advanced audio formats, such as Dolby TrueHD, Atmos, DTS-HD Master Audio, DTS:X, you need to make sure that your HDMI switcher is compatible.

The switcher also has to support HDMI handshake requirements that are implemented via either the HDCP (High-bandwidth Digital Copy Protection) or HDCP 2.2 for 4K devices protocol between source devices and the TV or video projector. This is important when switching between devices, as there is a temporary break in the handshake until the newly selected device locks in with a new handshake.

HDMI splitters that send two, three, four, or more signals from a single HDMI source are available, but for consumers, two is usually enough. Splitters with more outputs are mostly for business and commercial use where one source needs to be sent to multiple TVs or projectors.

Splitters can be powered or passive (no power needed). It is best to use powered splitters to avoid handshake or signal loss issues. The splitter also has to be compatible with the video and audio signals you may need to pass through. Just as with a switcher, if one video display device is a lower resolution than the other, the output for both may default to the lower resolution.

Using a Home Theater Receiver as an HDMI Switcher or Splitter

Emily Ramirez has been writing for Lifewire since 2019. She's previously written for the Massachusetts Digital Games Institute and MIT Game Lab, and has a background in narrative design and media. She's very family with games, TV, and audio devices, and particularly liked the Knivo 550BN for its five high-speed HDMI ports and reliability.

Adam Doud has been writing in the technology space for almost a decade and is also the creator and host of the Benefit of the Doud podcast, which reviews and discusses popular technology.