The 9 Best Handheld Game Systems of 2022

Take your favorite titles on the go

The best handheld game systems should give you the option of playing games no matter where you are. The original Nintendo Game Boy might have been less powerful than the NES console and stuck with an ugly green screen, but the portability and ease of access made it a smash. That rough template has stuck over the years, with dedicated gaming handhelds sacrificing high-end specs in favor of travel-friendly dimensions and reasonable prices.

Granted, portable game systems have seen their thunder stolen by modern smartphones and tablets of late, but at least in the case of Nintendo, they’ve also adapted.

Ultimately, there are more options than ever for gaming on the go, with the best smartphones able to tap into incredible libraries of mobile games and tablets doing much the same with larger screens. If you're looking for the best handheld game systems, read on. 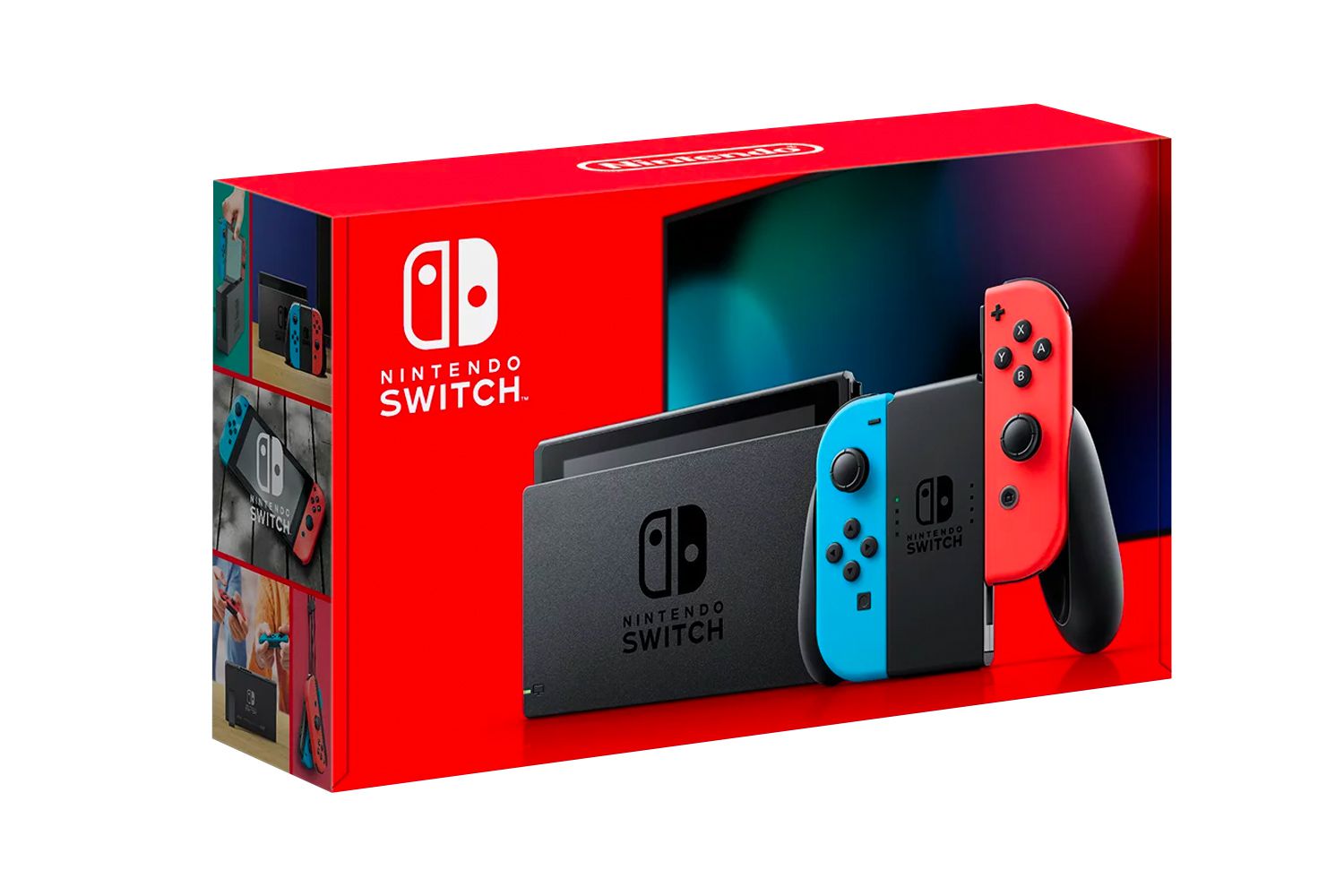 View On Amazon View On Walmart View On Backmarket.com
What We Like
What We Don't Like
Nintendo Switch Review

The Switch is the culmination of all of Nintendo’s brilliance to date, combining handheld and home console into one clever device. You can play the Switch anywhere thanks to its 6.2-inch touch screen, but you can also detach the controllers on either side of the screen, pop the core unit into the included dock, and play games on your TV like a traditional game console.

It’s a smart approach that makes the Switch the best of both worlds, rather than a pale shadow of each. Granted, the Switch’s graphics aren’t as strong as the PlayStation 4 or Xbox One, but it has Nintendo’s own fantastic first-party games and more than 1,000 others between downloadable releases and plug-in cartridges. The Switch is the gold standard for handheld gaming right now, and our reviewer called it the best handheld gaming console for good reason.

"A mix of portability, excellent first-party games, and family-friendly features, make the Switch a console that punches above its weight." — Zach Sweat, Product Tester 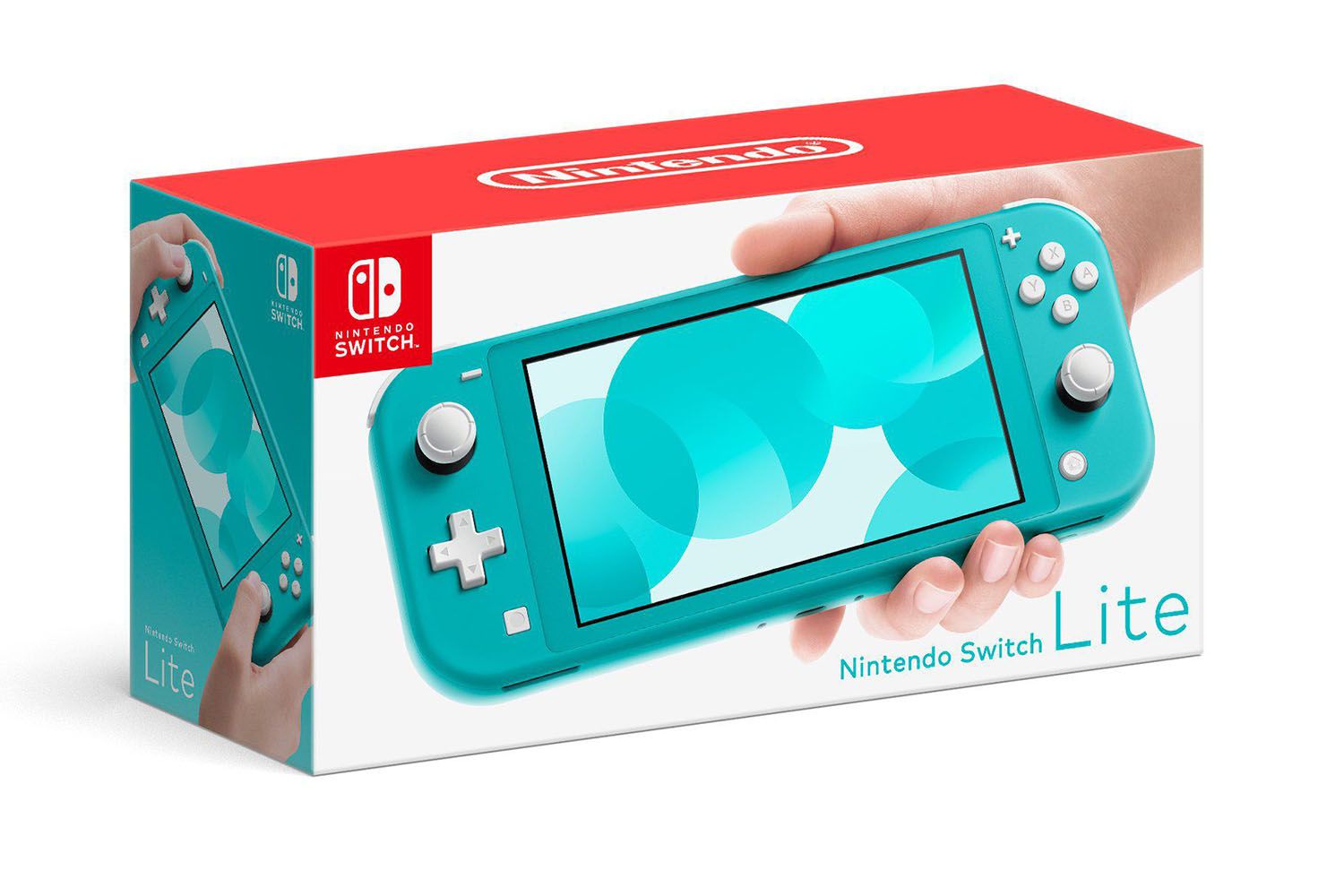 The Nintendo Switch Lite is basically the modern Game Boy. Unlike the pricier, normal Switch, you can’t dock the Switch Lite or connect it to your television: it’s purely a portable system and the controllers don’t detach. As our reviewer noted, the screen is a little smaller (5.5 inches) and there are no motion controls available, as well as no vibration functionality for force feedback while you play.

But at a significant savings compared to the standard Switch, this is a great deal for a system that has an incredible library of games. The sleeker build is ideal for those who are often on the go, and the battery life is even a smidge better than the Switch at 3-7 hours—depending on what you’re playing. It also comes in vibrant colors, too.

"Despite being stripped of some of the Switch’s more unique features and strengths, the Switch Lite is a perfect console for gamers on the go or those who prefer handheld—and the price is hard to argue with." — Zach Sweat, Product Tester 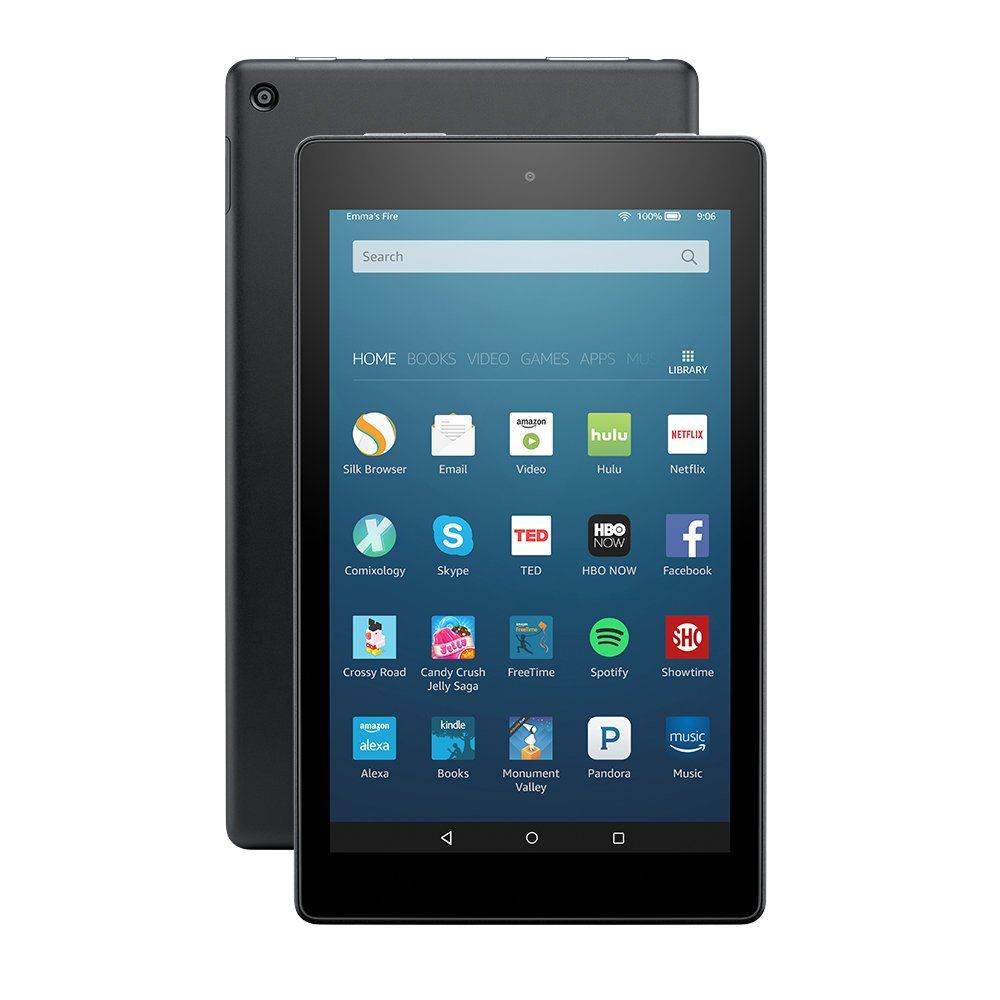 Courtesy of Amazon.com
View On Amazon View On Best Buy View On Staples
What We Like
What We Don't Like
Amazon Fire HD 8 (8th Gen) Review

The Fire HD 8 isn’t Amazon’s most affordable tablet (the Fire 7 costs less), but it hits a sweet spot in terms of price, power, and features. With the Amazon Fire HD 8, you get an 8-inch high-def touch display, a decent quad-core processor, and a 12-hour battery. And while you probably wouldn’t expect much from a budget tablet, the results are pretty surprising as our reviewer pointed out.

Unlike the cheaper Fire 7, the Fire HD 8 is solidly capable of running 3D games like racing favorite Asphalt 9: Legends, along with most of the other games found on Amazon’s Appstore. It’s also a good tablet for reading, running non-gaming apps, and watching TV shows and movies, with a highly portable size and excellent price to match.

"The Fire HD 8 is not a pocket powerhouse by any stretch, but if you can navigate through the many compromises in its OS, it’s worth it." — Jordan Oloman, Product Tester 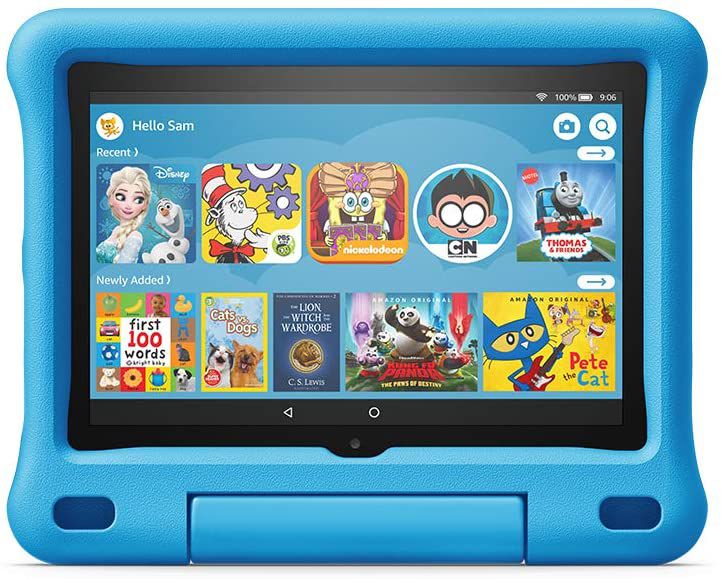 View On Amazon View On Best Buy View On Hsn.com
What We Like
What We Don't Like

If you’re looking for a tablet that can entertain a young kid, there’s no better option than the Amazon Fire HD 8 Kids Edition. Parents will love everything about this portable device, starting with the design. Not only is the tablet wrapped in a spongy, colorful foam case that’ll protect it from drops and dents, but Amazon will replace a broken unit for the first two years.

Amazon’s content ecosystem is plentiful, but you also get the added bonus of a free year’s subscription to the FreeTime Unlimited premium service, which provides all-you-can-consume access to games, TV shows, books, and more. There are models with 8-inch and 10-inch screens available, each with the same core perks. 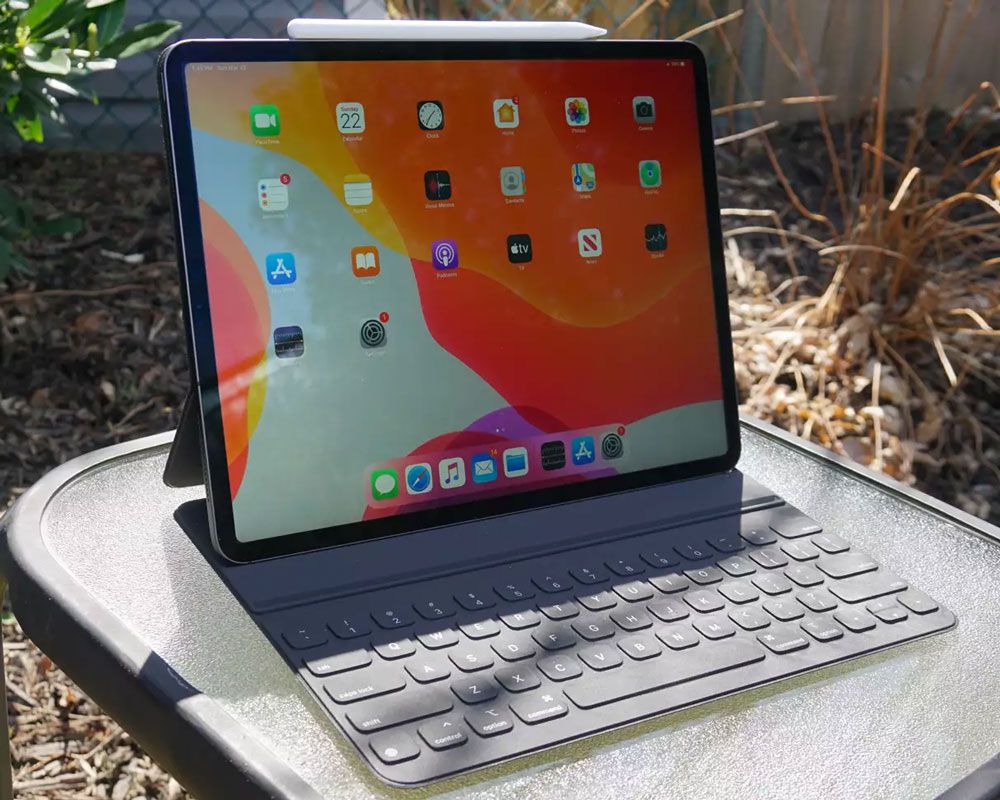 All of Apple’s current-generation iPads are great mobile gaming devices, with the entry-level iPad recently upgraded to the speedy A12 Bionic and the pricier models packing even newer and faster processors. But if you want the biggest, best display to showcase all of your favorite touchscreen games, you can’t do any better than the 12.9-inch iPad Pro. Lance Ulanoff put it to the test and loved how close the hardware and capabilities came to a laptop experience.

Released in early 2020, the current iPad Pro is a beast, packing a speedier A12Z Bionic chip custom-enhanced for the tablet, and that huge screen is a stunning OLED panel with a silky-smooth 120Hz ProMotion feature. It has added perks like a LIDAR depth camera that improved augmented reality apps, plus like all other current iPads, it supports the Apple Pencil stylus. But for games, just know this: the screen is incredible and it has the power to match.

"Thanks to more powerful components and a hybrid OS (iPadOS 13.4) the iPad Pro is no longer just a tablet. It’s a computer in a screen just waiting for a keyboard and mouse." — Lance Ulanoff, Product Tester

The 6 Best Gaming Laptops for Battery Life in 2022 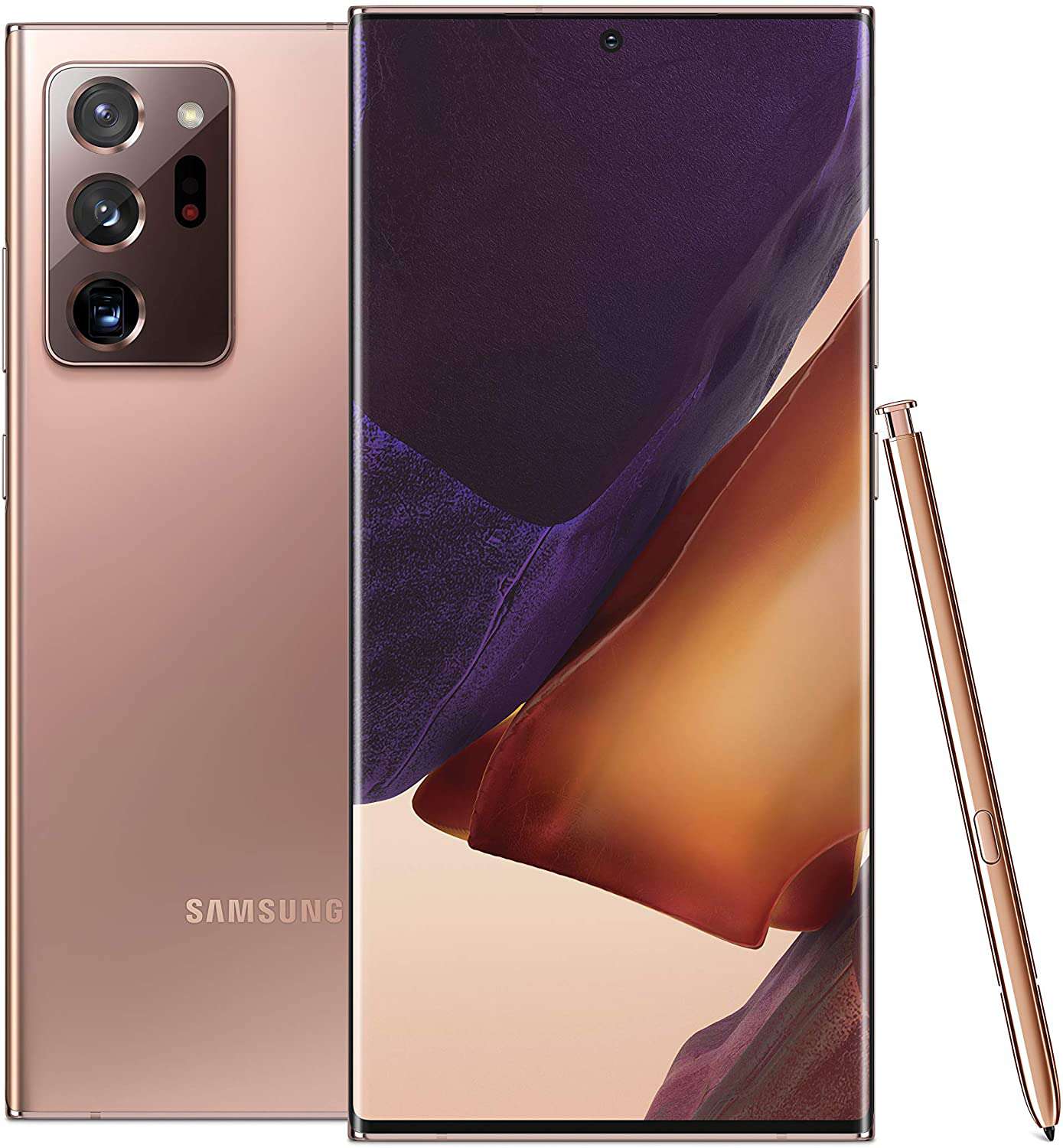 If you’re more of an Android fan, then the most lavish and capable phone you can buy today for gaming is undoubtedly Samsung’s Galaxy Note 20 Ultra 5G. Like previous Note models, this flagship smartphone is very large, very powerful, and packs a pop-out stylus for drawing, jotting down notes, and other tasks.

What’s new this time around? Well, the Note 20 Ultra 5G has a massive 6.9-inch screen at a very crisp QHD+ resolution, plus a Qualcomm Snapdragon 865+ processor and a beefy 4,500mAh battery pack inside. While Android doesn’t have the exclusive games found on Apple Arcade, it has the vast majority of other top mobile games on the market today, and they look and play beautifully on his big (but very expensive) handset. 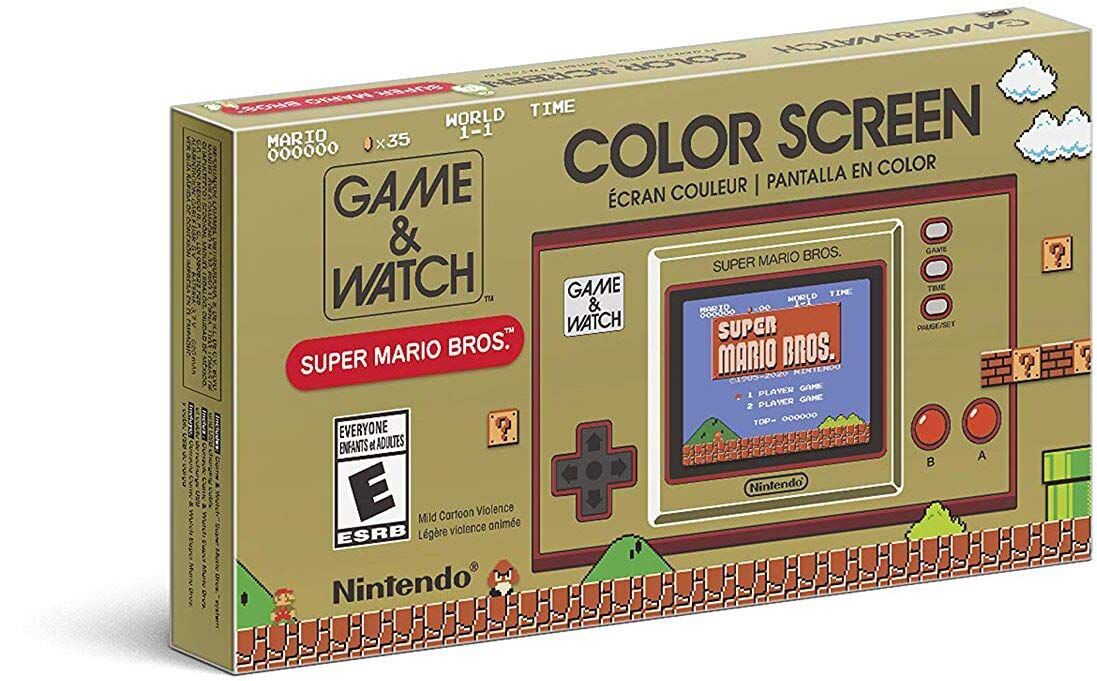 View On Amazon View On Walmart View On Best Buy
What We Like
What We Don't Like
Nintendo Game & Watch: Super Mario Bros. Review

The Nintendo Game & Watch: Super Mario Bros. handheld brings retro gaming to a compact handheld device reminiscent of the classic. The design is attractive with its red and gold case, the LCD screen is bright, and it's preloaded with Super Mario Bros., Super Mario Bros. 2 (The Lost Levels), and Ball. There are also 35 hidden interactions you can unlock during gameplay. There's even single and multiplayer modes available. At its affordable price, you can't go wrong with this handheld as a stocking stuffer.

"From the moment you pick up and pop open the box, the design oozes old-school cool and nostalgia." — Emily Isaacs, Product Tester 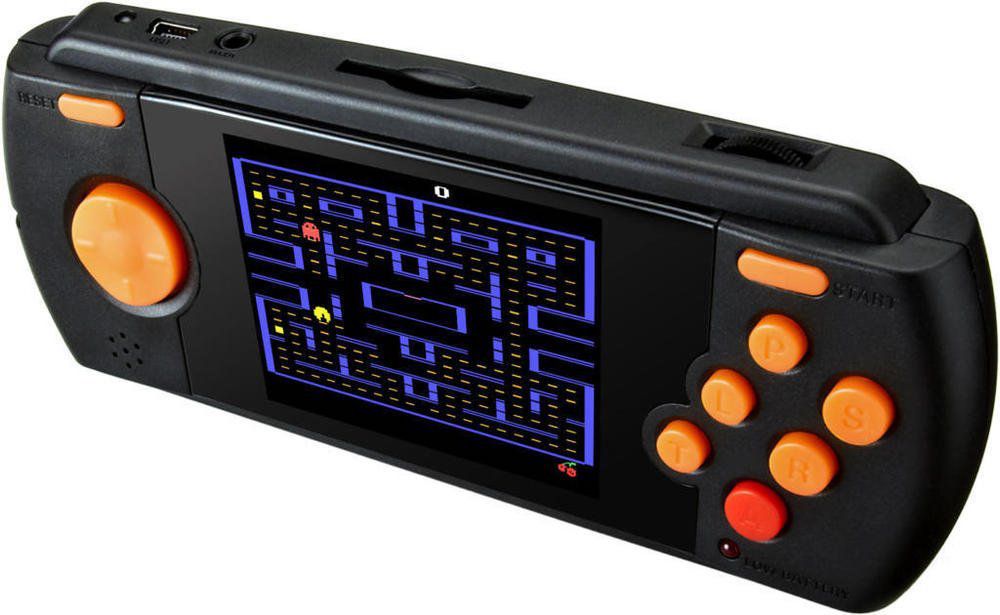 Got a hankering to revisit Atari’s classic games from the 1970s and 1980s? That’s exactly what the officially-licensed Atari Flashback Portable is designed for. This all-in-one device bundles in 70 games, making it a great pick for a cheap handheld that you can fire up with ease anytime you want to play an old-school great.

It’s a compact handheld with a small 2.8-inch screen, but the simple graphics of the era look just fine here, with games like Pac-Man, Frogger, Pitfall, and Adventure ready for your attention. You can even plug in an SD memory card to install further games, or use a cable (not included) to hook it up to a TV to recreate the retro sensation all over again. 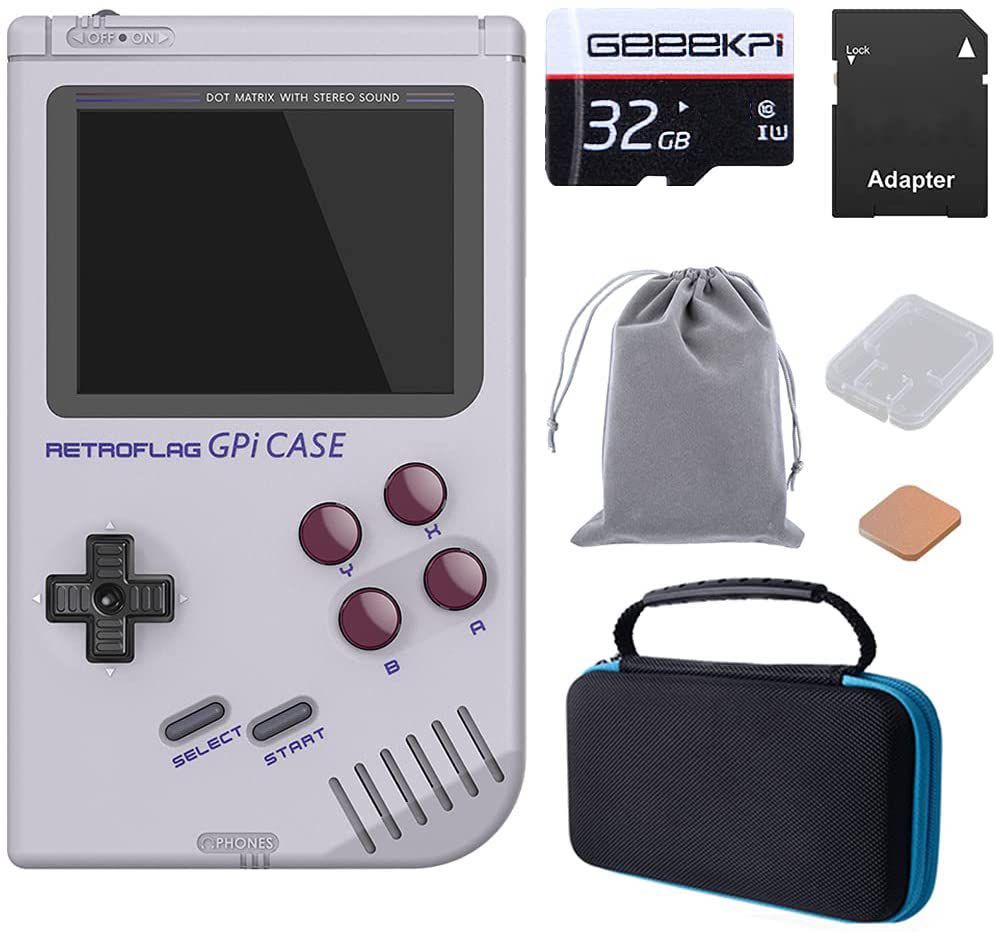 Want to make a fun project out of buying a handheld gaming system? The GeeekPi Retroflag GPi Bundle provides just that, as you’ll get all of the pieces needed to construct a functioning handheld capable of playing emulated games from classic consoles such as the Super Nintendo, Sega Genesis, Game Boy, and NES.

This set is based on the tiny and affordable Raspberry Pi Zero W single-board computer, which you’ll mount within the Game Boy-mimicking case. You also get a 2.8-inch screen, a 32GB microSD card, and all of the other pieces needed to assemble a working device. This takes some technical know-how, but comes with instructions—plus there are loads of Raspberry Pi tutorials out there. You’ll feel all the more satisfied playing something that you built yourself.

The Nintendo Switch is hands-down the best handheld gaming console available today, with the cheaper Switch Lite a strong alternative if you can do without the TV docking capabilities. Otherwise, a quality smartphone like the Apple iPhone 11 Pro Max or Samsung Galaxy Note 20 Ultra 5G can provide a large screen and access to thousands of fun games.

About our Trusted Experts:

Andrew Hayward is a freelance writer and editor who has been covering games and gadgets since 2006. His work has appeared in more than 100 publications around the globe.

Zach Sweat is an experienced tech reviewer and editor who's previously been published in IGN, Void Media, and others. He reviewed many of the top handheld devices on this list, particularly the Nintendo Switch and Nintendo Switch Lite which he praised for being nearly unbeatable in the handheld gaming space.

Jordan Oloman is a tech reviewer and writer who's covered games and products for Kotaku, Eurogamer, IGN, GamesRadar, and RockPaperShotgun. He put the Fire HD 8 to the test and liked its budget price and reasonable gaming performance, especially for kids.

Emily Isaacs has been writing for Lifewire since 2019. As an avid gamer and tech enthusiast, she's covered several games and mobile devices.

What to Look for in an Handheld Game System:

Game Selection - Hardware isn’t very useful without great games to play on it, so consider which games you’re most interested in—and how much you’re willing to spend on them. The Switch has the best selection of immersive, in-depth games, but they sell for as much as $60. Just want some fun diversions? Your smartphone or a tablet might do the trick.

Battery Life - If you’re planning on playing for long sessions away from home, such as while traveling, then you’ll need to be mindful of how long a portable game system can last for. The Switch and Switch Lite will typically give you 4-5 hours of uptime, for example, so you might want to pack a battery pack if you have a long flight ahead.

Connectivity - Most of the devices on this list have Wi-Fi capabilities for downloading digital games, but not all of them. They may also offer online connectivity for multiplayer games, whether they’re active matches or asynchronous, turn-based skirmishes.