Say goodbye to the old and boring flat screen TVs 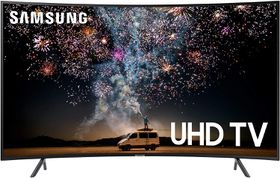 If you're in the market for a curved TV, check out the Samsung RU7300. This TV measures 55 inches diagonally and features a curvature designed to reduce glare for a clear picture no matter where you're sitting. This model uses a 4K UHD processor for smooth media playback as well as crisp upscaling from non-native 4K sources. It utilizes Samsung's proprietary PurColor technology for deeper contrast between black and white areas as well as greater color saturation for more true-to-life picture quality.

You can connect this TV to an Amazon Alexa or Google Assistant unit for voice control and better integration of all your home theater tech. This unit features a universal media guide that suggests shows and movies based on what you watch, similar to Netflix or Hulu. It has a clean cable management system that allows you to tuck cords away for a clean-looking set-up. Our reviewer Andrew loved the crisp display and clean, intuitive interface. 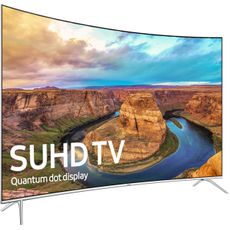 For anyone who is willing to spend more to get a great curved TV, the Samsung UN65KS8500 65-Inch is a great choice. This model delivers 4K UHD resolution with HDR support and an ultra black enhancer for superior contrast and detailing. The curved screen uses an auto depth enhancer to give you a more immersive and clear viewing experience. The TV is built with the Android TV operating system to give you access to thousands of streaming apps as well as an internet browser.

With the Smart View app, you can share videos, music, and photos from your smartphone or tablet; you can also mirror your television to your mobile device for multi-room viewing. The built-in speakers feature DTS Premium Sound 5.1 audio technology for a more cinematic listening experience. With Bluetooth connectivity, you can set up external audio equipment for the ultimate home theater. You can also connect your favorite voice command speakers for hands-free controls. 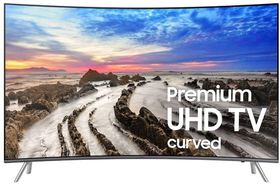 If you're looking for a larger format TV for your family room or home theater, the Samsung UN65MU8500 65-Inch TV is worth a look. This model features 4K UHD resolution with HDR support for better detailing and color saturation. It also uses Samsung's triple black enhancer for superior contrast so you never miss a detail, even in super dark scenes. The screen gives you up to 500 nits of brightness, so you can enjoy your favorite shows and movies in almost any lighting environment.

With native smart functionality, you can access all your streaming apps right on the TV without the need for extra equipment. You can also connect your smart speaker devices for hands-free voice commands. The down and front firing speakers use DTS Premium Sound technology to give you a more cinematic and immersive listening experience.

The TV also has Bluetooth connectivity so you can set up external speakers and sound bars for a better home theater audio system. It comes packaged with Samsung's OneRemote which allows you to control all your compatible devices with a single remote. It's also OneConnect Box compatible, allowing you to have just one cable connect all your media devices to your TV.

Taylor Clemons has been reviewing and writing about consumer electronics for over three years. She has also worked in e-commerce product management, so she has the knowledge of what makes a solid TV for home entertainment.

When they were first introduced in 2013, manufacturers hoped that curved televisions would be the latest and greatest thing in home entertainment. Touted as having better viewing angles and great picture quality at any angle, as well as providing a more immersive viewing experience, curved TVs were meant to bring the technology behind IMAX theaters into the home. However, not many customers bought into the idea, so many brands have stopped producing curved televisions.

Samsung still offers a curved TV model in 55 and 65-inch sizes, allowing customers to replace an older model or try out the futuristic aesthetic of a curved television in their living room or home theater. While you may think that there isn't much difference between a curved and flat screen television, there are several important factors to consider before buying one. We'll break down and explain some of them to help you decide what best fits your needs and space.

While curved televisions didn't gain the popularity that Samsung and other manufacturers had hoped for, you can still find the Samsung RU7300 model in 55 and 65-inch sizes; perfect for most medium-sized living rooms and home theaters. Curved televisions were designed to reduce glare from natural and overhead lighting, giving you a better movie and show watching experience. The curvature of the screen is also built to provide full color volume at almost any viewing angle, so no matter where you're sitting in relation to the screen, the picture never looks washed out or dim.

The biggest drawback to a curved television is that they require specialized brackets for wall mounting, which can be quite expensive, as well as very heavy, and curved TVs often don't look as great as their flat counterparts when mounted. The curved edges stick out from the wall, creating the danger of breakage from accidental bumps. The anti-glare benefit has been improved upon by their flat cousins as well. Many newer flat screen televisions have panels that have been treated with anti-glare coatings or built with anti-reflective glass, giving them better viewing angles and color volume without a curve. However, a curved TV can still find a home in your living room, dorm, or home theater, if you're looking for a unique aesthetic.

If you've decided to purchase a curved television, it's time to determine what size best fits your space. To do this, pick a spot for a dedicated stand or wall mount and measure the distance to where you are most likely to sit; then divide that measurement in half to get the ideal screen size. For example, if your couch is 10 feet from your TV (120 inches), the ideal TV size is 60 inches. With both 55 and 65-inch options available from Samsung, they can easily feel at home in a middling or larger space. A screen that is too large not only takes up an unnecessary amount of space and may not even fit your room at all, it can cause motion sickness. A screen that is too small makes it difficult to make out details and colors, and forces everyone to crowd around the television, making a watch party or even watching shows and movies with family after dinner uncomfortable.

With a size in mind, it's time to talk about screen resolution. Televisions that provide 4K UHD resolution have become more popular and mainstream in home entertainment as the technology has become more affordable. They give you four times the pixels of 1080p full HD, meaning you can get a wider color range and more detailing. Many streaming services offer UHD content so you can take full advantage of your TV's picture technology. Samsung has also begun to produce a line of 8K televisions. These give you four times the detailing of 4K and 16 times that of 1080p. However, these models are incredibly expensive, and there is a serious lack of 8K content available to stream or watch over broadcast signals. This means that unless you're looking to future proof your home theater, you'll be paying a lot of money for a TV that you won't be able to begin to take advantage of for several years. Samsung has also yet to produce a curved television that can produce 8K resolution.

Sony was the first manufacturer to produce a curved TV, releasing their 65-inch KDL-65S990A in October of 2013. After that, Samsung and LG were quick to release their own curved TV models on the consumer market. Each brand claimed that their curved screens gave customers a more immersive viewing experience, wider view angles, and better color volume at extreme side angles. They also claimed that the curved screen reduced glare from lighting. As the years went on, and brands saw that customers simply weren't buying curved models, they slowly and quietly began phasing them out of their lineups.

At the time of writing, Samsung is the only major manufacturer that still offers new curved televisions. The RU7300 is currently the only curved television available. It offers smart features like media streaming and voice controls, which have become almost mandatory for home entertainment. If you're worried about spending too much on a new television, the RU7300 retails for around $500, allowing it to fit all but the tightest of budgets. If you're a brand loyalist and don't mind buying an older model, you can pick up refurbished LG and Sony curved televisions for a little bit cheaper, but the catch is that they may not be covered by any manufacturer warranties.

As smart technology progresses, voice controls have become as important a part of home televisions as 4K UHD resolution. Many of Samsung's models, both older and newer, are compatible with both Amazon Alexa and Google Assistant. Some may need to be connected to an external smart speaker to take advantage of this, but some have voice-enabled remote controls with built-in microphones, allowing you to use voice commands right out of the box. Samsung has taken this one step further by including their proprietary virtual assistant, Bixby, with all of their newest models. It works in much the same way as Alexa or Google Assistant: you can launch apps, browse your movie and show libraries, search celebrity names or film titles, and even control other devices in your smart home network.

Samsung's Bixby is an excellent option for anyone looking to get their first virtual assistant since it is automatically included in the price of your television and quick to set up; it also doesn't require the purchase of a separate speaker, saving you a bit of money in the long run. Of course, not everyone needs or wants hands-free controls, so Bixby and the other virtual assistants can be disabled in the TV's menus, making the remote the sole command input for your television. The RU7300 seems to only support Alexa and Google Home, meaning you won't get to experience Bixby, but you'll still be able to use voice commands over your curved television.