Keep your CPU from overheating 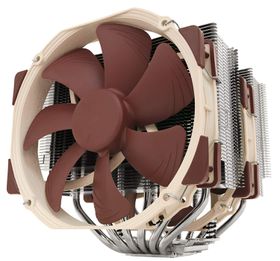 Buy on Amazon Buy on quietpcusa.com

It’s hard to take advantage of a lightning-fast, overclocked processor in your computer if you can’t keep it from overheating. Buying a heatsink-and-fan air cooler like the powerful Noctua NH-D15 is an effective way to make sure your CPU temperatures stay low and under control. Heat travels up from the base of the heatsink through six copper heat pipes to dual-tower aluminum fins that allow for better airflow and heat distribution. It’s cooled by a pair of 140mm fans (the second fan is optional) that are about the biggest size you’ll find, but they’re whisper-quiet when they run.

The NH-D15 is all-in-all excellent at its job: keeping your processor cool. And while it’s not flashy in design like other components tend to be, especially for high-performance gaming, Noctua has built this cooler with top-quality, durable materials. It’s on the larger side at 165mm tall and 161mm deep, both fans considered, so you’ll want to make sure you have enough room in your case. But it is compatible with most Intel and AMD socket types, and the well-designed mounting hardware makes it simple to install. Noctua also throws in its own premium non-conductive thermal paste to apply between your CPU and the heatsink, along with a generous six-year warranty in case anything goes wrong.

While liquid cooling systems are often seen as edging out fan-based units in terms of pure cooling power, the Cryorig R1 Ultimate air cooler will have you doubting the difference. Seven copper heat pipes are arranged for more even heat conduction. Its dual fans are big 140mm ones, with a Jet Fin Acceleration System helping increase the airflow speed through the tower. All the oomph you get from the setup means slightly more noise than comparable competing models, but it’s part of the price you pay for one of the most powerful CPU coolers around.

It’s also important to note that the R1 Ultimate takes up a lot of space to do what it does, including a tight or tricky fit underneath if your nearby RAM sticks are on the tall side. (Cryorig makes an R1 Universal model specifically to stay more out of the way of tall RAM.) Buyers looking for visual appeal won’t be disappointed, with a slick and modern gray-and-black design to match the R1 Ultimate’s attractive performance. You can even mod the fan covers with your choice of custom colors in a metallic finish.

Cooler Master’s Hyper 212 Evo is one of the most popular air coolers today, and it’s not hard to see why. Given how much solid quality and performance it delivers, it’s almost hard to believe how affordable it is. The Hyper 212 Evo makes it a manageable investment to upgrade your stock cooling system, and the noticeable drop in degrees for your dollar makes it more than worthwhile.

The heatsink’s four copper heat pipes are joined in a way that creates a uniform surface with more contact area, leading to more even cooling of the CPU. The single fan is 120mm in size and supports pulse width modulation (PWM), which can adjust the fan’s speed and airflow based on the temperature. You’re also able to add a second fan if you’re looking for more air. Some of the downsides to the Hyper 212 Evo are noise and installation issues reported by some users, but for most, it's an excellent value. 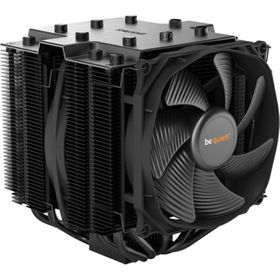 For a brand called Be quiet!, you would hope the products can deliver on extremely low operating noise. That certainly seems to be the case with the Dark Rock Pro 4, the company’s top-end CPU air cooler. At 50 percent speed, the two large PWM fans produce 12.8 dB(A) of noise, and it goes up to only 24.3 dB(A) at maximum fan speed. On that scale of A-weighted decibels, which are relative to what the human ear can hear, those numbers are about as silent as they come.

Helping drive the performance side of the Dark Rock Pro 4’s impressive performance-to-noise ratio are seven heat pipes and a double-tower layout. The black coating on the pipes isn’t just to give it an elegant and understated aesthetic. Like a lot of other design choices on this sizable premium cooler, it also contributes to improving heat transfer and circulation. The features add up to a device rated as being able to cool 250 watts of thermal design power (TDP), which means it should do just fine with any processor you can throw under it. 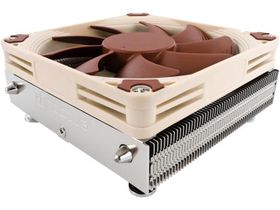 Small or slim cases, like those for mini-ITX gaming PCs, simply won’t have room for a large, multi-fan air cooling setup. Fortunately, there are low-profile solutions that can cool your processor efficiently, while maintaining a compact frame, and Noctua’s NH-L9i is among the best at it. At a tiny 95mm square and 37mm tall with the fan, the NH-L9i is designed to be fully compatible with Intel LGA1150, LGA1151, LGA1155, and LGA1156 sockets, with enough clearance for RAM and PCIe slots in the vicinity. Its mounting brackets are set up for easy installation on mini-ITX and most other motherboards.

The NH-L9i isn’t meant to serve as the most powerful cooling product; Noctua warns against using it on CPUs outputting heat at more than 65 watts TDP. One thing it does excel at, though, is being incredibly quiet, with the fan able to run nearly silently at lower speeds. If your priorities meet at the intersection of low fan noise and a low profile, the NH-L9i is right there waiting for you.

Many of the most powerful CPU coolers, whether they’re air- or water-based, come in hefty sizes, but their benefits make them worth considering if your case has enough space to squeeze them in. The MasterAir Maker 8 from Cooler Master is one such immense, albeit immensely effective, product. Weighing 2.6 pounds and measuring 135x145x172mm, it’s an absolute beast of a unit.

A highlight of the Maker 8’s components is the innovative 3D Vapor Chamber design of the base, which includes four vertical heat pipes merged into it. Four other U-shaped pipes are connected, bringing the total to eight pipes. There’s a single aluminum-finned tower, flanked by a pair of easily detachable 140mm fans that are specific to the Maker 8. It runs quietly enough, and it cools marvelously.

Provided you can work out the fit, installation is generally straightforward. Its bold style with red LED lighting goes well with a lot of the gaming hardware it’s likely to be paired with. You can swap out the top cover with a translucent one for the lights to shine through, or even use the included schematics to create a custom 3D-printed cover of your own.

If you plan for it to be part of a flashy gaming rig that you’re proud to show off, you’re going to want a cooler that can look cool while keeping cool. With the MasterAir G100M, Cooler Master takes a visually distinct approach to the air cooler’s design. The first difference you’ll notice is the UFO-esque disc shape, if not the colorful RGB LED lighting. It comes with a wired controller for the lights, letting you cycle through a number of effects without going through software.

You’ll find unique functional design elements in the G100M as well, with a single copper heat column instead of traditional heat pipes and a 92mm PWM fan that brings cool air from the top down to the CPU and nearby components. It’s not the strongest at cooling, or the quietest for that matter, but it will work well enough for a lot of processors (at stock speeds). And while it’s low-profile at 74.5mm in height, the slightly bulky shape may block some of your other components. The G100M isn’t ideal for those looking for pure performance. For a reasonable price, however, it brings with it a touch of style, and novelty to boot.