Chromebooks are a cheap, easy to use alternative to a traditional laptop

If you need an inexpensive and versatile machine for routine tasks like checking email, streaming media, or doing schoolwork, a Chromebook could be the perfect laptop for you.

The Google Pixelbook Go is a great choice for most people, and is powerful and brilliantly designed, albeit at a relatively high price. The Lenovo Duet Chromebook 2 is a good budget alternative.

Chromebooks are affordable, portable, and run on a version of Google's Chrome browser rather than running Microsoft's Windows or Apple's macOS. That means you have access to almost everything you need that's web-based, as long as you have a stable Wi-Fi connection and a Google account.

While you can’t install any software like Photoshop or Microsoft Word, Chrome offers free alternatives to a lot of popular software. They're limited yet versatile devices that are well worth considering if you're on a tight budget, and we've got a full guide to What is a Chromebook? if you're still not sure.

Here are our top picks for the best Chromebooks. 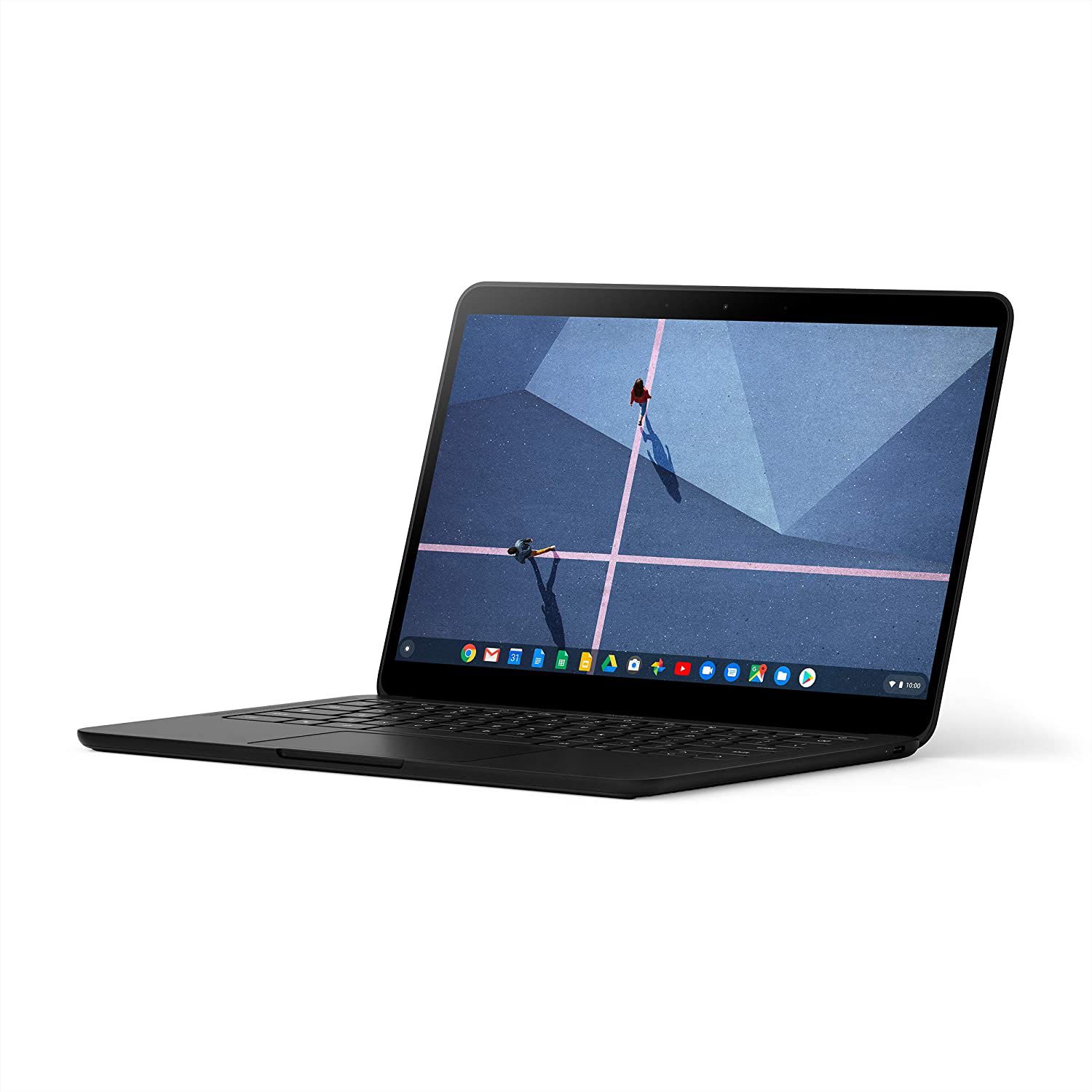 Since Google is responsible for creating Chrome OS, it makes sense that their own devices are the best for these lightweight laptops. The Pixelbook Go easily beats the competition in most respects, with a powerful processor, plenty of RAM, and a high-resolution 13.3-inch display with a better-than-average webcam.

The only caveat is the price, which is more in line with Windows-based laptops. While a similarly priced laptop might seem like a better deal, Chromebooks tend to remain fast and responsive because of the lightweight operating system. The better build quality also means the Pixelbook Go can survive longer than other Chromebooks with cheaper designs.

Overall, the Pixelbook Go is a more capable gadget than you'd typically expect from a Chromebook. If you're looking for the best Chromebook out there, this is it.

"I tested the PixelBook Go for 40 hours and enjoyed almost everything about using it, especially the slim but durable build. Even though this Chromebook is only about 0.5 inches thick, it showed no signs of flexing when I picked it up at the edges. The ribbing on the bottom of the device also helped prevent any sliding around while I worked. While it doesn't have a lot of storage, this Chromebook excels in other areas compared to most competitors. It comes with decent speakers, a top-notch keyboard that's easy to type on, and impressive battery life. While Google predicts 12 hours of battery life, I easily reached 13 hours." —Jonno Hill, Product Tester 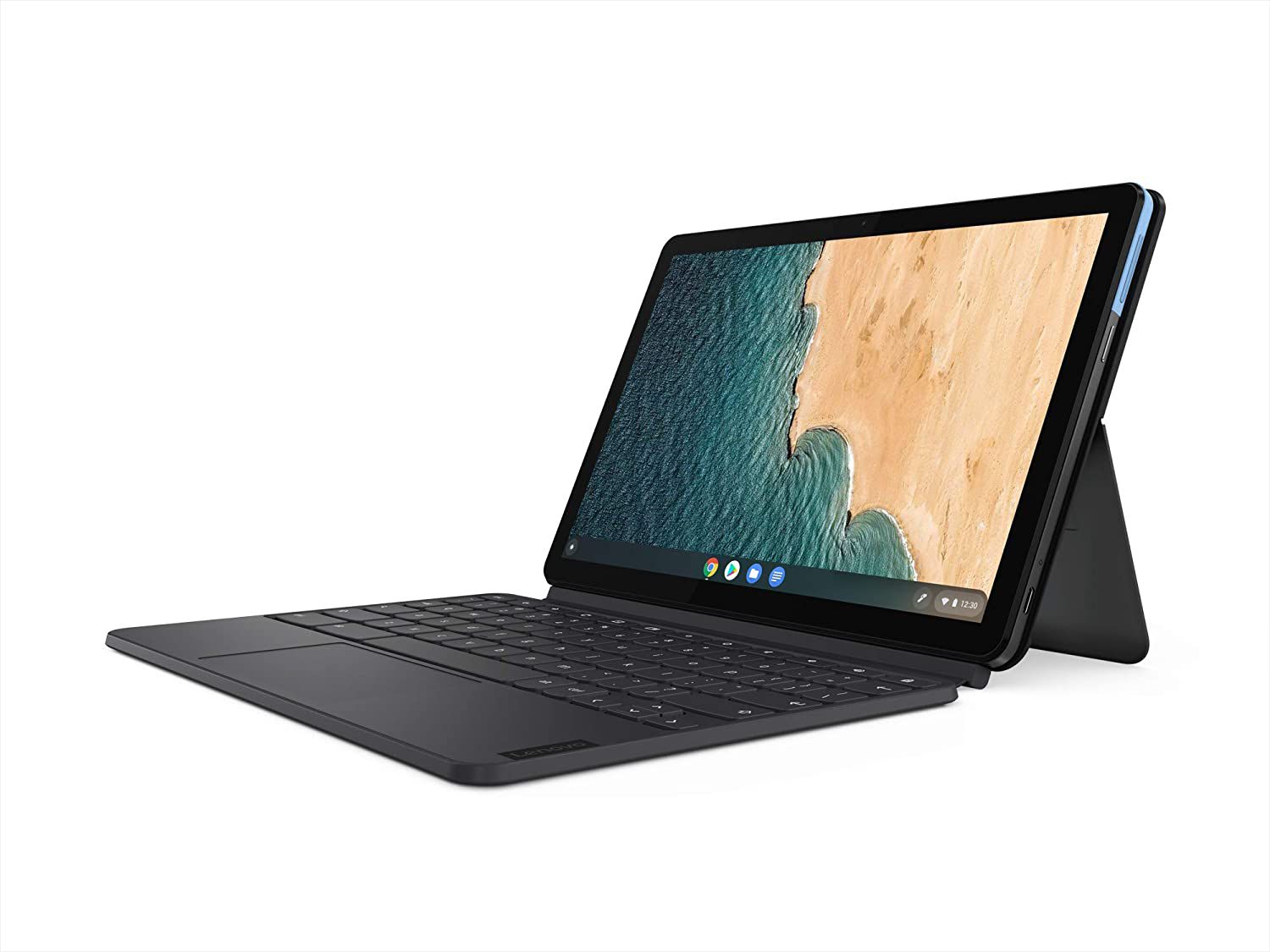 The Lenovo Chromebook Duet is one of the more attractive laptop/tablet hybrids in an affordable price range. It combines the flexibility of a 2-in-1 device with a bright and beautiful 1920x1200 touchscreen display and a high-end design.

Overall, the Duet isn't that powerful, with only 4GB of RAM and a MediaTek Helio P60T processor, but that's plenty for the browser-based applications Chrome OS supports. For a wallet-friendly price, you also get a reasonable 128GB of solid state drive (SSD) storage, which is more storage than most Chromebooks offer.

"I put the Lenovo Chromebook Duet to the test for 20 hours and found the build to be well-made and pretty solid. Like most devices in the dual laptop and tablet category, the Duet comes with a protective magnetic case that doubles as a stand. The magnetic cover is very strong and showed no signs of slipping when I used it to prop up the 10-inch display, which is surprisingly crisp and great for productivity. However, the Duet is let down by its detachable keyboard, which I found to be cramped and difficult to type on and has an annoying tendency to malfunction when it becomes partially disconnected from the rest of the device. Since the Duet is more of a tablet with an optional keyboard than a real laptop/tablet hybrid, it has outstanding value—and the flawed detachable keyboard isn't necessarily a dealbreaker." —Andy Zahn, Product Tester 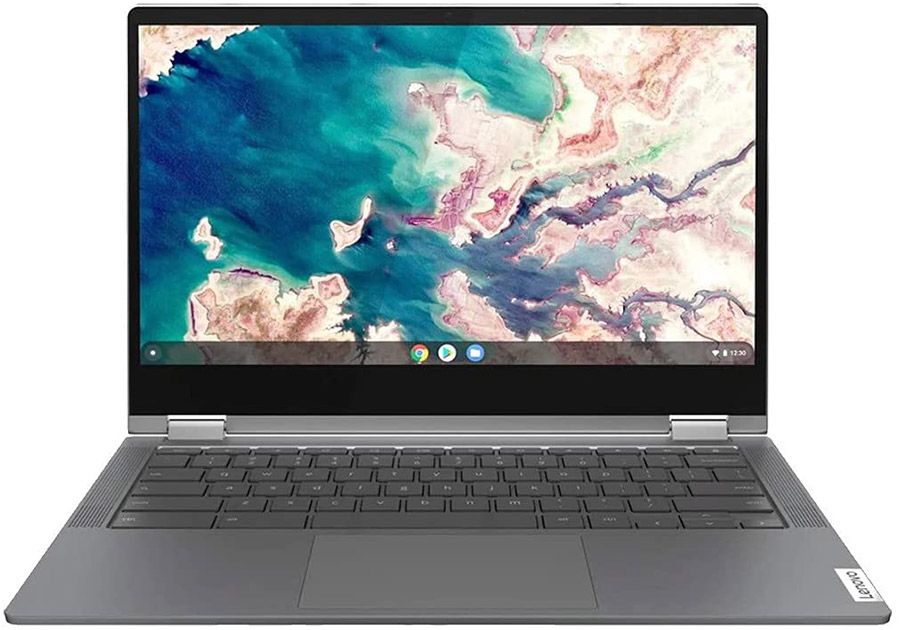 The Lenovo Flex 5 Chromebook offers excellent value. Its high-definition 13.3-inch display features thinner bezels (borders around the display) than you often find on budget-oriented laptops, and its front-facing speakers provide surprisingly decent audio. It only has 4GB of RAM, which isn't a lot of memory, but it's not such a big deal in an affordable device running Chrome OS. Similarly, the 128GB SSD is plenty for a primarily web-based computer system that doesn't need a ton of internal storage.

The 2-in-1 system of the Flex 5 offers plenty of flexibility, allowing it to transform from a laptop into tablet mode. This versatility is particularly handy if you buy the compatible Lenovo digital pen (unfortunately sold separately). This Chromebook also offers an ample selection of ports, with USB-C and USB 3.2 Gen 1 ports and a microSD reader. Lenovo estimates up to 10 hours of battery life, which isn't the longest, but certainly enough to get you through the day. 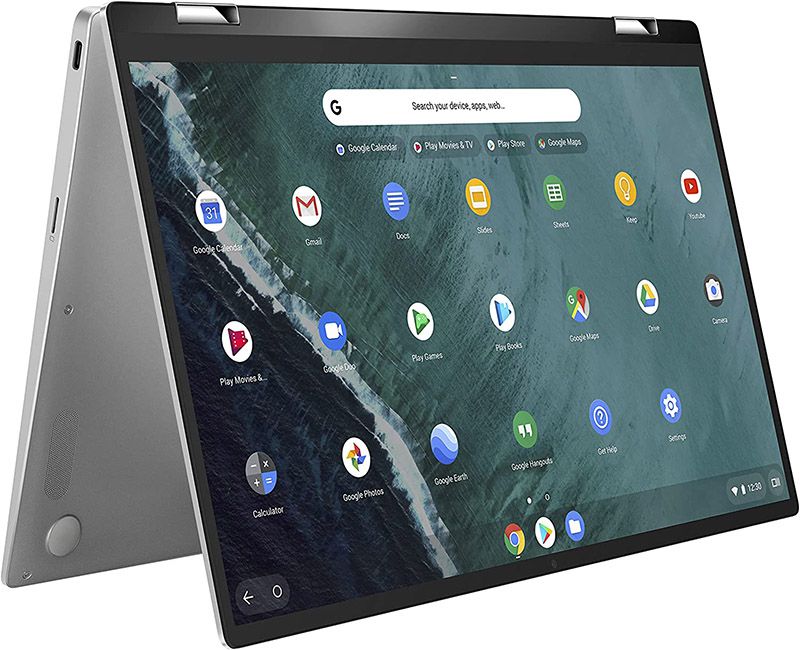 View On Amazon View On Best Buy View On Asus.com
What We Like
What We Don't Like

The Asus Chromebook Flip C434 is a stylish, well-rounded device with ample flexibility for everyday use. It offers 8GB of RAM and 128GB of storage, which should be plenty for daily tasks like web browsing, and is perfectly adequate for a Chromebook. The most noteworthy feature is the flexible 360-degree hinge, which allows you to operate it in laptop mode, as a tablet, propped up at an angle with the keyboard underneath it, or in a tented orientation.

The all-aluminum build has a premium feel that's both durable and lightweight. The high-resolution 14-inch display is bright, has thin bezels, and is touch-responsive. One slight design drawback is that speakers are bottom-facing, which is less than ideal for sound quality. However, the responsive keyboard, sizable trackpad, and decent 10-hour battery life make it an excellent machine for getting work done. 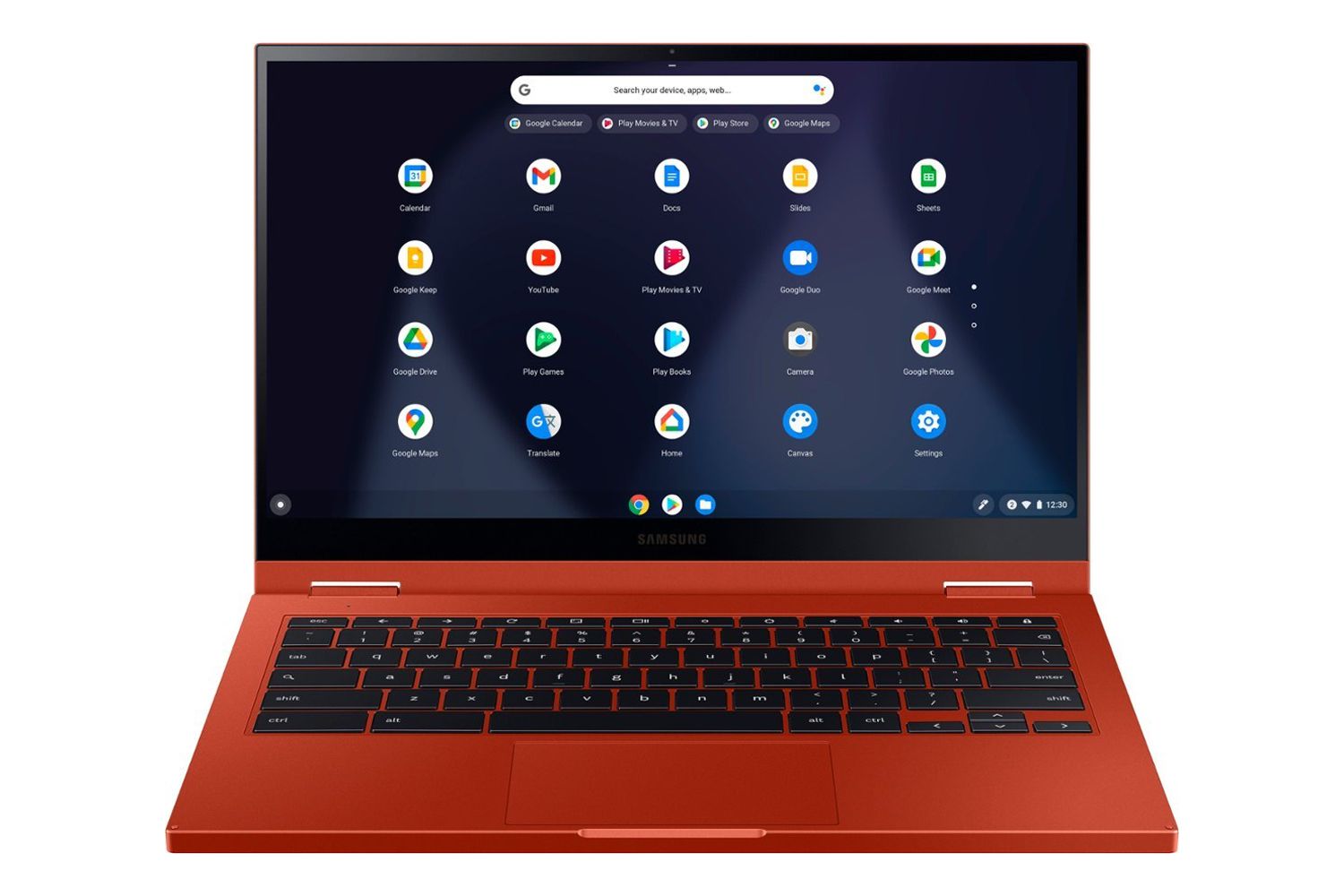 With the impressive build quality and a slick user experience, the Samsung Galaxy Chromebook 2 is a compelling Chrome OS-powered budget alternative to more expensive Windows and Mac devices. Its 2-in-1 functionality is well done, with a solid hinge allowing you to easily switch between tablet and laptop modes.

The Galaxy Chromebook 2 is powered by a modest 4GB of RAM and an Intel Celeron CPU5205U processor. Though these specs won’t win any awards for computing power, it's is an excellent choice for a 2-in-1 Chromebook.

"The Samsung Galaxy Chromebook 2 is budget-friendly and flexible. It features a particularly excellent keyboard, which felt very comfortable to use during my 20 hours of testing. I also found the touchpad to be roomy and the touchscreen responsive in tablet mode. The 13.3-inch 1920x1080 resolution screen was also very clear. It uses Quantum dot display (QLED) technology, which means it delivers deep blacks, bright colors, and crisp details. While Chromebooks aren't known for having great speakers, I noticed that the Galaxy Chromebook 2 produces high volumes and good audio quality, which is a bonus for streaming music or movies. My testing also confirmed Samsung's claim of 13 hours of battery life, which is more than enough to last a typical workday." —Andy Zahn, Product Tester 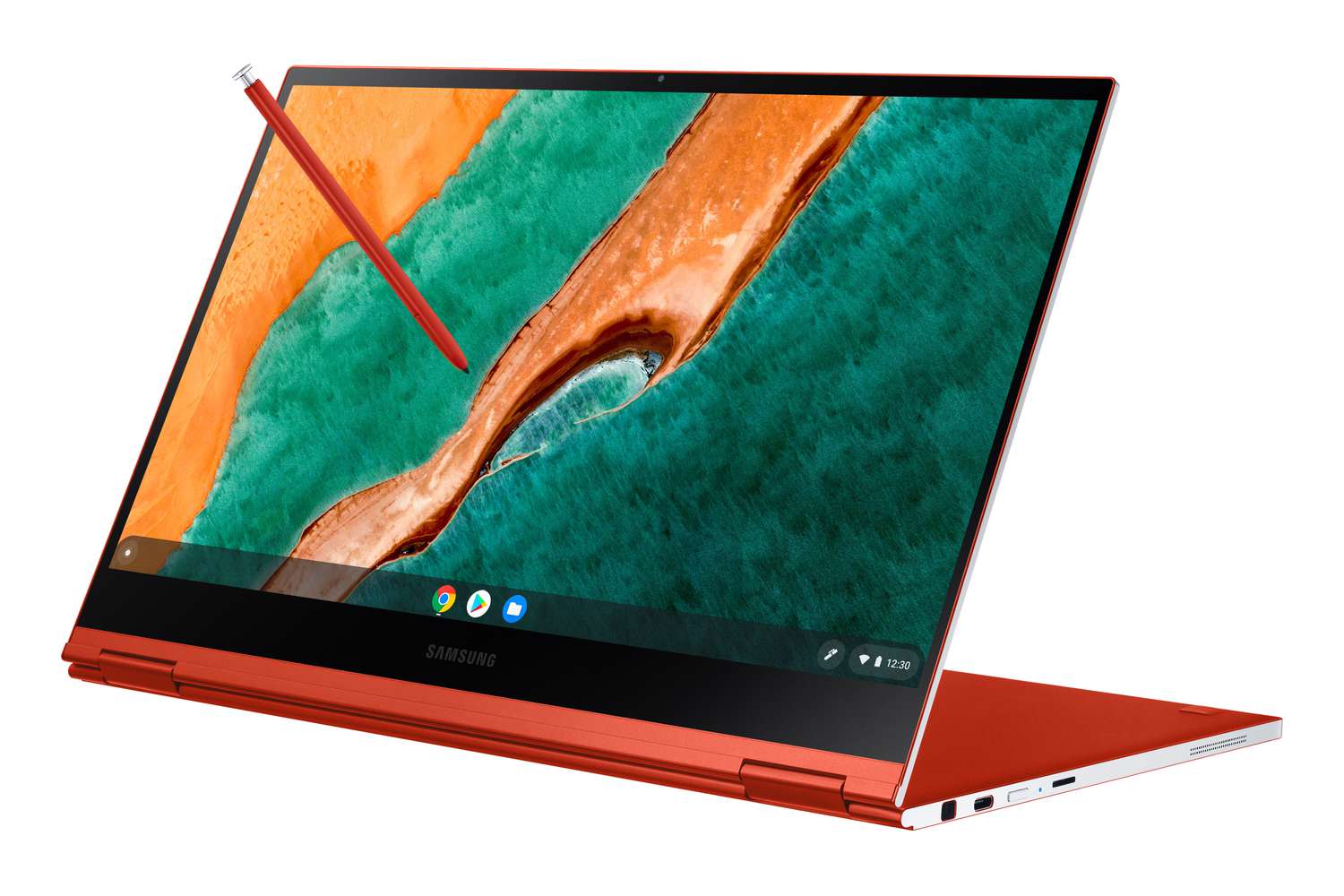 The Samsung Galaxy Chromebook is a sharply designed 2-in-1 device with bells and whistles many Chromebooks don’t offer. The first is a brilliant 4K resolution active-matrix organic light-emitting diode (AMOLED) 2-in-1 display that's really quite stunning. The built-in S Pen (Samsung's digital pen) has a convenient resting place when you’re not using it to sketch or take notes, and the fingerprint reader provides extra security and quick access to your computer. It’s also incredibly thin (0.39 inches) and lightweight (2.2 pounds), making it extremely portable.

With 8GB of RAM and an Intel Core i5 processor, the Galaxy Chromebook is more powerful than many Chromebooks, and its 256GB SSD provides ample storage for such a device. However, there are a few drawbacks, and the most significant is its high price. It also has disappointing speakers and low, eight-hour battery life. However, it's one of the best Chromebooks for its extra features and power. 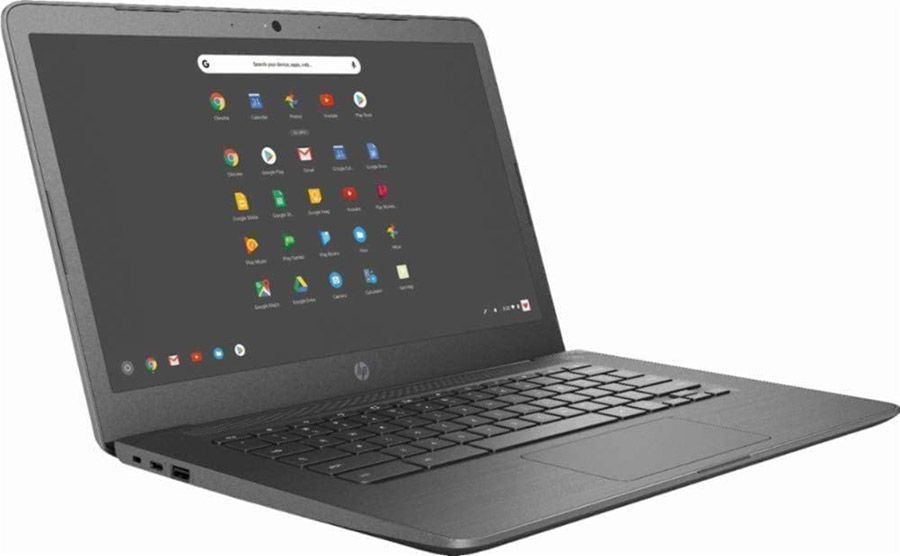 While 2-in-1 laptops are great for switching between work modes, a more traditional laptop-only design is often more stable and practical, particularly for students who mainly just need to write papers and attend online classes. The HP Chromebook 14 is ideal for students with limited budgets. It's cheap and functional, as well as light and portable. It doesn't have a ton of power: only 4GB of RAM and an absolutely tiny 32GB SSD. However, its 14-inch screen is a great size for writing and productivity.

The HP Chromebook 14 also has a great selection of ports, so you can plug in plenty of external accessories such as USB drives, mice, or keyboards. It's a bit cheap feeling and is definitely a "bare minimum" sort of device in many ways, but it's the perfect laptop for cash-strapped students.

The Google Pixelbook Go (view at Amazon) is the overall best choice for a Chromebook because it offers a great mix of performance, value, and quality. It's sleekly designed and lightweight and provides a high-quality webcam—something seldom found in laptops. You also get excellent battery life, which is a key selling point of Chromebooks in general. The Lenovo Duet Chromebook 2 (view at Amazon) is a good alternative if you need to save some money. Despite its low cost, it's a remarkably well-made laptop.

What to Look for in a Chromebook

The amount of Random Access Memory (RAM) you have essentially dictates how much you can do at a time on your computer. In Windows or macOS laptops, it's important to have a lot of RAM for various demanding tasks. However, on Chrome OS, you can get away with having only a fraction of the RAM you need in a more traditional laptop. A minimum of 4GB is just fine, though it's never a bad thing to have more.

A perk of choosing a Chromebook is the included 100GB of Google Drive storage. However, since you may not always be connected to the internet while using it, it's important to have some onboard storage. Most Chromebooks have at least 64GB of storage space, which is adequate since there's not much need to store large quantities of data on these laptops. Many Chromebooks only offer 128GB or 256GB of storage capacity.

Many Chromebooks have a 2-in-1 design for transforming from a laptop to a tablet. It can be a handy trick, though the primary use case for these devices is in their laptop format. The option to use a Chromebook as a tablet offers a great way to enjoy compatible Android apps, drawing, or reading e-books.

Andy Zahn has written for Lifewire since 2019 and covered a wide range of products including laptops and Chromebooks. As an avid outdoorsman, he was a fan of the extra portability offered by several of the devices on this roundup.

Jonno Hill is a writer who covers tech such as computers, gaming equipment, and cameras for Lifewire and publications including AskMen.com and PCMag.com.

The 8 Best 2-in-1 Laptop Tablets of 2022
Was this page helpful?
Thanks for letting us know!