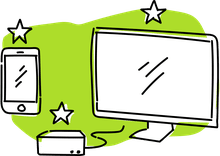 Best Overall: It's A Wonderful Life at Amazon

"It’s A Wonderful Life is a Christmas classic that debuted in 1946 and gradually came to define the genre of holiday films."

"An elaborate series of traps, a misunderstood neighbor and a bit of luck make this a heartfelt and hilarious Christmas film."

"For many families, A Christmas Story is the definitive holiday film to ring in the festivities."

Best for the Family: Elf at Amazon

"Elf stars Will Ferrell at the top of his game as the lovable but naive Buddy, an adopted elf who grew up on the North Pole but returns to the land of humans to find his father."

Best Live Action: How The Grinch Stole Christmas at Amazon

"Get the spookiest Christmas movie ever created, Tim Burton’s creative masterpiece The Nightmare Before Christmas."

"Bruce Willis stars as hard-boil NYC cop John McClane on a cross-country trip to Los Angeles for a visit to his estranged wife."

Best Overall: It's A Wonderful Life

Buy on AmazonBuy on WalmartBuy on Best Buy

Before the Grinch stole Christmas, Ralphie was warned he’d shoot his eye out, and Kevin McAllister was left home alone, there was the story of George Bailey. It’s A Wonderful Life is a Christmas classic that debuted in 1946 and gradually came to define the genre of holiday films, going on to be one of the most critically acclaimed films ever made. It is a tale of hardship, following down-on-his-luck George Bailey, a family man who has run into hard times and is on the verge of suicide on Christmas Eve when a guardian angel intervenes to save his life. The story is told mostly in flashback, revealing touching moments that defined George Bailey’s character, including moral choices and acts of selfless heroism. The movie is both depressing and uplifting, sure to evoke feelings and cause the audience to reflect on what is most important in their own life. This newly remastered version includes fascinating commentary and improved audio and video, a worthwhile experience for those who haven’t seen the movie in a while.

This 1990s Christmas classic takes you back to a simpler time, a time when you could arrive at Chicago’s O’Hare airport minutes before your flight and still run through to security to catch it, a time when a downed power line could prevent you from contacting your kids. The basic setup has young Kevin McAllister (Macaulay Culkin) and his family oversleeping their alarms on the night before the big trip to Paris. Kevin wakes up to discover he has the whole home to himself: his wish. But before long a pair of robbers (Joe Peschi, Daniel Stern) tries to take advantage of the holiday absenteeism. With no one else to turn to, Kevin takes matters into his own hands to defend his home. An elaborate series of traps, a misunderstood neighbor and a bit of luck make this a heartfelt and hilarious Christmas film.

Buy on AmazonBuy on WalmartBuy on Target

For many families, A Christmas Story is the definitive holiday film to ring in the festivities. Released in 1983 but set in the 1940s, this film is rich in 20th century nostalgia for a time of crowded department stores and long uphill walks home in the snow to get to school. Told from the perspective of young Ralphie, the audience gets a first hand view of Christmas time through the eyes of a child. There are trips to see Santa at the mall, dealings with the neighborhood bully, avoiding dad’s wrath, and, of course, dreams about the Red Ryder B.B. gun. Little Ralphie’s best friend gets his tongue stuck to a frozen pole, everyone admonishes that he will shoot his eye out if he gets his prized gun and his little brother doesn’t waste any opportunity to make fun of him. This Christmas classic is a great tradition to pass on.

Best for the Family: Elf

Elf stars Will Ferrell at the top of his game as the lovable but naive Buddy, an adopted elf who grew up on the North Pole but returns to the land of humans to find his father. This is a Christmas classic that entertains the kids with whacky antics and slapstick humor, while packing just enough subtlety and heart to hook the adults, too. A star-studded guest cast includes Zooey Deschanel as the sardonic department store worker whom Buddy falls head over heels for, James Caan as Buddy’s cynical Manhattanite father and Peter Dinklage (of Game of Throne’s fame) as a cutthroat children’s book author. You can’t help but root for the pure at heart Buddy as he tries to navigate the urban jungle.

Director Ron Howard reimagines the Dr. Seuss classic in this dazzling live action adaptation of the beloved children’s book. Jim Carrey stars as the Grinch, a green grouch who lives alone with his dog Max and schemes up ways to ruin everyone else’s holiday. He descends on the happy denizens of nearby Whoville, stealing presents and cutting down Christmas trees. His reign of grumpiness is brought to an end when he encounters Cindy Lou Who (Taylor Momsen), a sweet girl who challenges his grouchy ways. This heartfelt slapstick comedy is a goofy Christmas film for all ages, mixing nostalgia with Carrey’s hilarious over-the-top performance.

Get the spookiest Christmas movie ever created, Tim Burton’s creative masterpiece The Nightmare Before Christmas. The 1993 classic has been restored and digitally remastered with eye-popping HD animations, bringing this nightmarish musical into the modern age. The Nightmare Before Christmas tells the story of Jack Skellington, the Pumpkin King of Halloweentown, a scary place filled with things that go bump in the night. Bored of the played-out horrors of his hometown, Jack wanders into the puzzling Christmas Town, a land of elves, trees and good cheer. He is enamored with this strange and mystical place and returns home to spread some Christmas cheer. But the monsters and ghouls of Halloween town are more than a bit skeptical of this new holiday.

Bad Santa is as atypical of a Christmas film as you’ll find. Definitely not a family film, it stars Billy Bob Thornton as Willie Stokes, a foul-mouthed, hard-drinking, skirt-chasing mall santa whose Christmas tradition is to rob his employers on Christmas Eve. In many ways Bad Santa was ahead of its time. The troubled anti-hero protagonist foreshadowed the Don Drapers and Walter Whites that would take TV by storm a few years later, drawing equal parts sympathy and revulsion. The film has a strong emotional core, as Willie reluctantly bonds with an outcast kid and lonely bartender. Equally crass and heartfelt, this Christmas movie deserves a rewatch from Mad Men or Bojack Horseman fans.

The classic Christmas action movie, Die Hard sets itself apart from the rest of the films on this list yet it still holds its place as a holiday classic. Bruce Willis stars as hard-boil NYC cop John McClane on a cross-country trip to Los Angeles for a visit to his estranged wife. But as the detective arrives at a LA skyscraper, the building is taken over by a group of terrorists who hope to trade hostages for a big payday. Evading capture, John McClane spends his Christmas Eve waging a war from the inside to free the hostages and get home for the holidays. With unforgettable montages, one-liners and action sequences, this hard-hitting holiday movie brings a unique spin to the Christmas genre.